Alright, so the J League is not exactly the EPL or LaLiga, but make no mistake, Japan’s top league has some big names and brilliant football that you are going to want to keep your eye on every now and then.

Recently, Barcelona legend Andres Iniesta has been turning things up a notch in Asia, quite literally turning things up, as demonstrated by this ankle-breaking move he pulled a few weeks back. Another Spanish star joined Iniesta in Japan this summer to spend his twilight playing years as former Liverpool and Atletico Madrid man Fernando Torres signed with Sagan Tosu.

It has taken him eight games and 628 minutes, but Fernando Torres finally has his first goal in Japan for Sagan Tosu after netting the third goal in their 3-0 win against Vissel Kobe in the cup. #トーレス pic.twitter.com/jCtaIoO6WI

On Wednesday, Torres and Sagan Tosu took on Iniesta and Vissel Kobe in a much-anticipated Emperor’s Cup clash. Sagan came out on top 3-0 with one of the highlights of the night being the maiden Fernando Torres goal in Japan in the 84th minute.

Sagan’s Akito Fukuta pulled off a brilliant move on the left flank to wiggle away from his defender and into the box. Fukuta slotted a simple pass back to Torres who, like one would expect of the seasoned striker, got himself in the right place and opened up his hips to finish, cool as you like.

The best part of this clip has to be Iniesta’s face at the end. Oof. 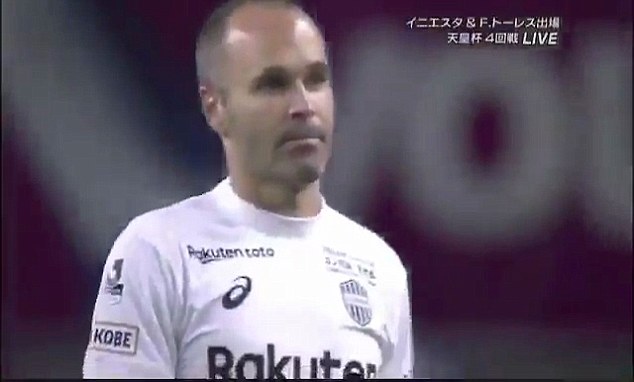 Vissel Kobe were knocked out of the cup with the loss. Photo: @OliverTrenchard | Twitter

While Sagan Tosu got the win, the picture is a lot different for the two teams when it comes to league play. Vissel Kobe is in fourth while Sagan sits in the relegation zone. Torres and his team will be hoping the goal and win Wednesday start a bit of a hot streak that can perhaps lift the side out of the bottom with 11 games left to go in the season.