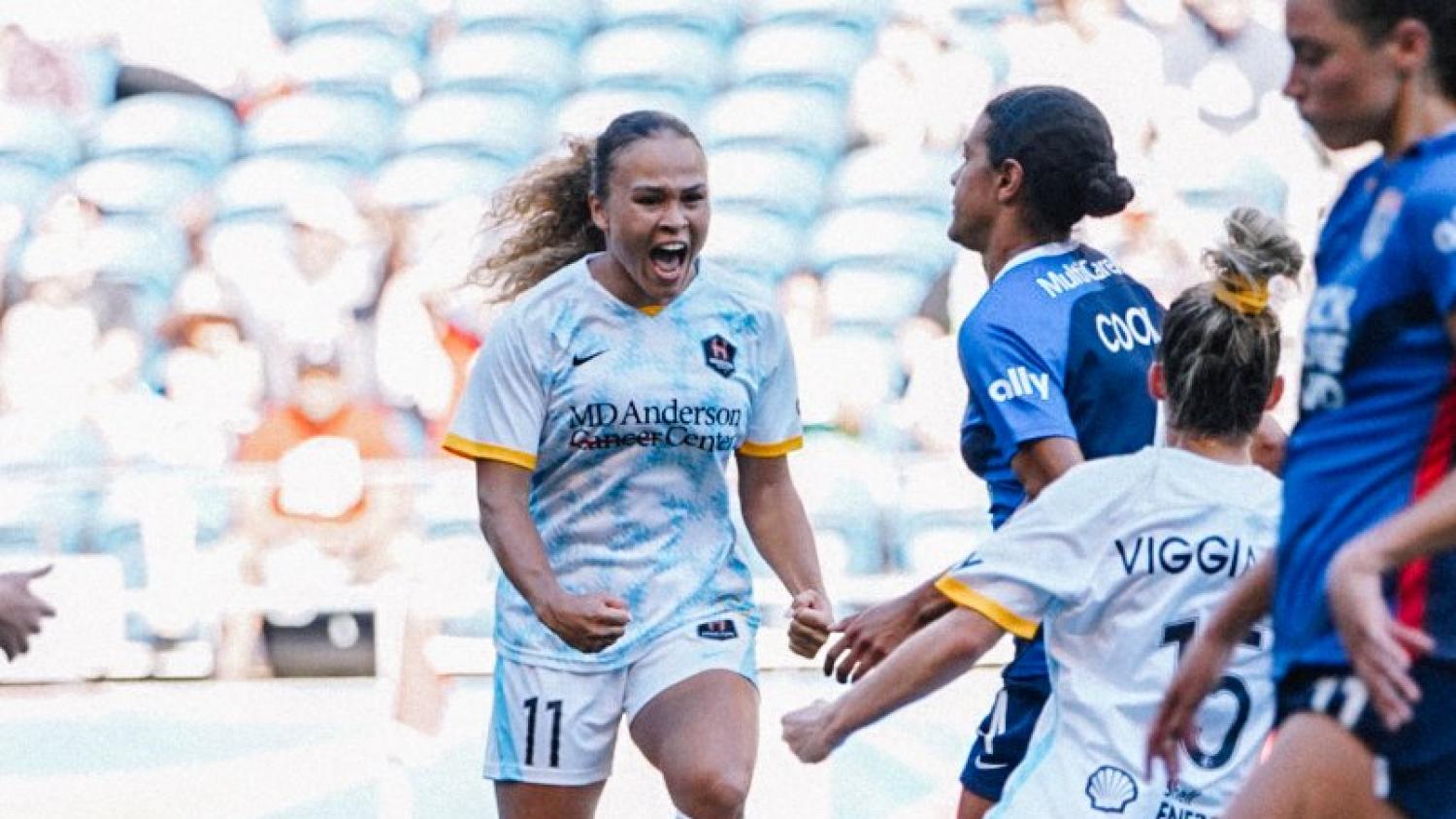 For 45 minutes, it looked like it was Megan Rapinoe’s day. She watched her fiancée, Sue Bird, play her final regular-season home game in the WNBA before heading over to Lumen Field, where she promptly put OL Reign ahead in the 16th minute with her first goal of the season. Then Ebony Salmon took over.

Salmon scored two goals in three minutes early in the second half to propel the Houston Dash to a 2-1 road win on Sunday afternoon in Seattle, the Reign’s first home defeat all season. The 21-year-old English forward has completely turned around her young career since moving to Houston in June and in doing so helped turn around the struggling franchise’s fortunes.

Ebony Salmon has six goals in her last three games. She was named NWSL Player of the Month for July and her August is off to a roaring start. With Salmon leading the line and new coach Juan Carlos Amorós leading the way, the Dash are in unchartered territory among the top clubs in the league with a legitimate chance at chasing the NWSL Shield.

I can’t believe I’m writing this: The Houston Dash might actually make the playoffs for the first time in franchise history.

The Houston Dash don’t exactly have a lot of history of success, which is in marked contrast to their most closely related sports teams in Houston. The only other top-flight soccer team in Space City, the Dynamo, won two MLS Cups in their first two seasons; the only other professional women’s sports team in the city, the now defunct Comets, won the first four WNBA titles.

Since joining the NWSL in its second season, Houston has failed to qualify for the postseason every year, finishing below .500 every time. The Dash haven’t won a damn thing unless you count the weird NWSL Challenge Cup in 2020, when half the league’s stars opted out of the competition.

Ebony Salmon’s 2022 season began with great promise. At the age of 20, she scored six goals in 20 NWSL matches in 2021, including a goal within one minute of debuting for Racing Louisville after arriving from Bristol City of the FA WSL. In the offseason, Kim Björkegren was brought on as the new Racing coach to replace Christy Holly, who was fired with cause.

Under Björkegren, Salmon struggled to see the field, totaling just 70 minutes in nine matches to start the season.

Without receiving playing time, Salmon had no chance to make England’s Euro 2022 roster. The Birmingham native made her international debut in a February 2021 friendly but hasn’t appeared since. While she wasn’t a favorite to make the Lionesses squad, she was arguably the best England forward not chosen and has the potential to work her way into the roster as players like Ellen White and Nikita Parris are phased out.

The 21-year-old received a lifeline when Houston came calling at the end of June. The Dash sent $150,000 in allocation money in 2022 — plus $40,000 more over the next two years — to Louisville in exchange for the precocious young forward.

“I think I’ve still got a lot to do out here before I think about going back to England,” Salmon told Striker Texas after joining the Dash. “I’m taking my anger from not playing in Louisville and I’m going to show what I can do here when I get on the pitch.”

Salmon went straight into the starting lineup with Houston, thanks in part to Nichelle Prince and Rachel Daly missing time on international duty. She failed to score in her first two starts of the season, but when Chicago came to visit on July 16, everything clicked into place.

Salmon scored a marvelous hat trick to lead Houston to a 4-1 win in Amorós’ first match in charge. She followed that with a goal in Houston’s 4-2 win over Gotham FC and on Sunday afternoon put two past OL Reign.

The Dash are flying right now. They’re currently third in the NWSL table with 24 points from 14 matches, a mere point back from perennial power Portland (25 points in 14 games) and impressive expansion side San Diego Wave (25 points from 15 games). Houston is a full six points ahead of seventh-place Angel City, the first team below the playoff line, making the playoffs a legitimate prospect.

Salmon has played a huge role, no doubt, but so too has the firing of coach and general manager James Clarkson amid an abuse investigation right before the start of the regular season. Former Tottenham co-coach and Real Betis head coach Juan Carlos Amorós of Spain was brought in as his replacement after a brief interim period under Sarah Lowdon, and he has helped develop a squad of underrated players into NWSL Shield contenders.

There's no limit to what this group can do @JuanC_Amoros | #HoldItDown pic.twitter.com/DOCWgc3hQf

The Dash have never been a team of big-name stars. No one seems to want to play for Houston; Christen Press skipped town as soon as she was traded to the Dash and Carli Lloyd rarely showed up in her three years with the club, literally and figuratively (she once scheduled a book tour in the middle of the season). During the 2019 Women’s World Cup, the only NWSL team without a USWNT player was the Dash. The last two full seasons, the Dash have been second to last in attendance.

This year, the Dash again have no USWNT stars to draw fans to PNC Stadium, a nice venue in the burgeoning EaDo area of Houston (it could use more shade). The team leaders are good players for other national teams like Nichelle Prince, Sophie Schmidt and Allysha Chapman for Canada, María Sánchez for Mexico and Daly for England, but not the world-renowned superstars that might draw more casual women’s soccer fans in the nation’s fourth largest and most diverse city. But this year the Dash are drawing 5,550 fans per match, about 2,000 more than last year and their best numbers since 2016.

Fans who have shown up have been treated to the second-highest scoring team in the league. Houston has scored four or more goals four times this season, most in the league, and is the only team to beat Portland in league play. Salmon has only made this team more exciting to watch.

Salmon brings unique goal-scoring abilities to the Dash. She’s quick, sure, but her footballing IQ is high for her age, producing smart runs in behind the defense; her youthful confidence makes her a great penalty kick taker — she’s two for two from the spot since joining Houston. Her finishing in front of goal is something the Dash have long lacked; the only time Houston has ever had a double-digit scorer in a season was Kealia Ohai (now Watt) in 2016 with 11; Salmon is on pace to break that record in half a season. The Dash’s leading scorer the last few years has been Daly, who plays fullback for England.

“She has been fantastic,” Amorós said of Salmon after the Reign match. “It is the job of the No. 9 to make those things happen. ... When it came to taking the penalty, it was about finishing it, and when it came to finishing that second chance, it was outstanding.”

With five of eight remaining matches at home, the Houston Dash are in their best position yet to finally make the postseason. They might even sneak into one of the top two places to earn a first-round bye in the playoffs.

The Dash started turning things around when Clarkson was kicked to the curb — Ebony Salmon and Juan Carlos Amorós are turning them into legitimate contenders.