A Timeline Of Abuse: How Women’s Soccer Coaching Hires Resulted In Decades Of Exploitation 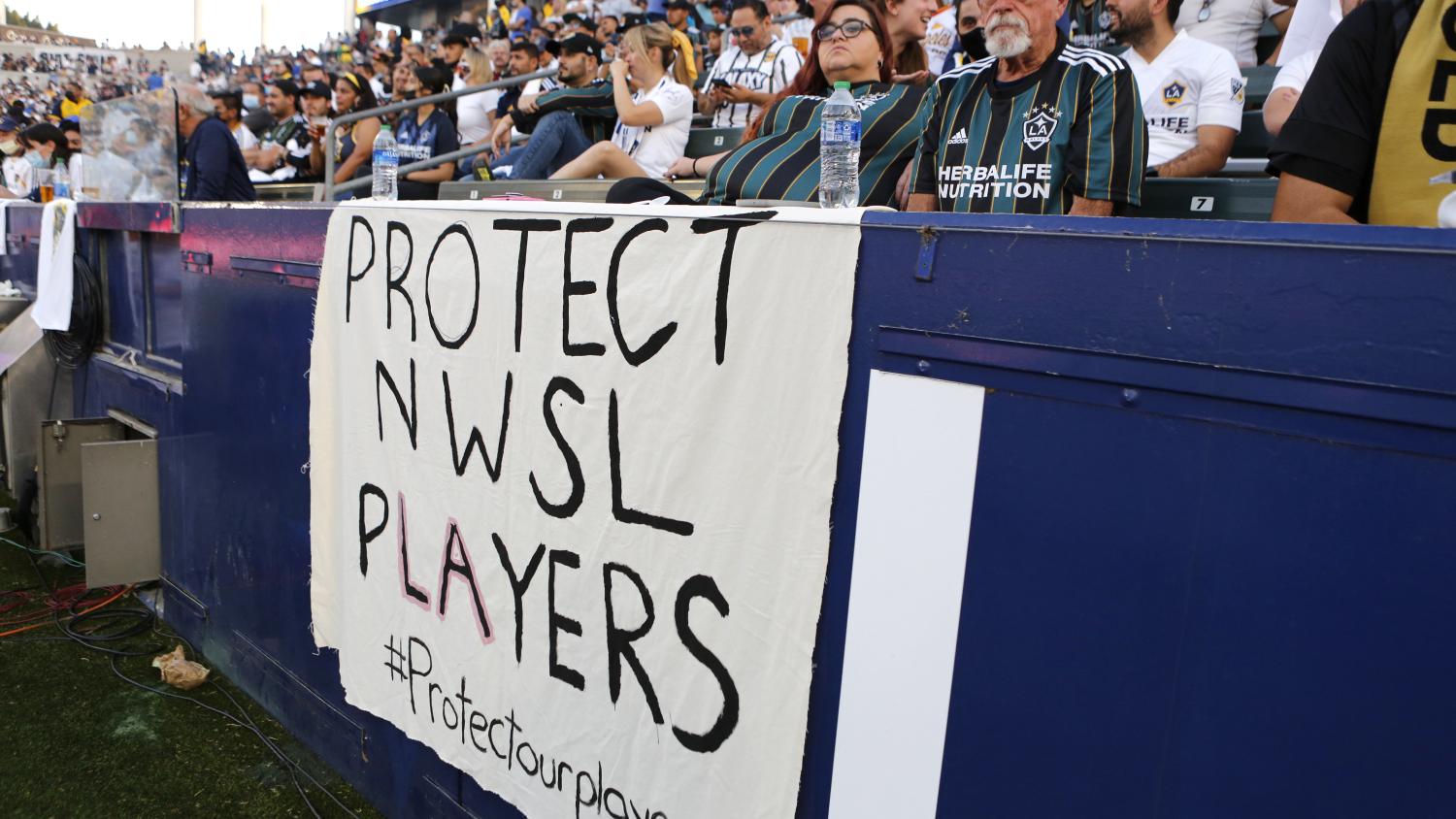 From 2020-2021, six coaches, one administrator and one owner in the NWSL lost their jobs after accusations of improper behavior.
Getty Images

To say 2021 was a bad year for women’s soccer in the U.S. would be an understatement of epic proportions. In October, The Athletic detailed horrifying allegations of verbal abuse and sexual coercion by N.C. Courage coach Paul Riley, sending shockwaves through the NWSL. The league called off all matches for the weekend and Lisa Baird was ousted as NWSL commissioner. U.S. Soccer hired a former U.S. attorney general (Sally Q. Yates) to lead an independent investigation and even FIFA decided to weigh in, suddenly remembering it’s supposed to care about women.

But anyone who’s been paying attention to women’s soccer at all in recent years (or in its entire history) knows this isn’t a one-time thing. These accusations against Paul Riley aren’t an outlier — they’re the norm.

The revelation that Paul Riley allegedly emotionally abused and sexually coerced his players was sickening. We summarized the allegations here, but in short: Sinead Farrelly and Meleana “Mana” Shim detailed a pattern of exploitation and manipulation from the longtime coach, dating back to his days in Women’s Professional Soccer, the precursor to the NWSL.

Riley, according to the reporting from Meg Linehan and Katie Strang, was verbally abusive to certain players, grooming them to desire his approval. He reportedly went out drinking with players or would invite a player to late-night video sessions at his apartment or hotel room, where he’d be wearing nothing but his underwear. Riley is accused of coercing Farrelly into having sex with him so she could maintain her career as a professional footballer, and Shim said he tried to do the same with her. Riley was fired as Courage coach after the allegations became public.

There is much more to Riley’s behavior — almost all of which Riley has denied — but the point of this story isn’t so much that Riley appears to be a creep of the worst kind. The point is that this is a pattern in women’s soccer, one that has long been noticeable.

In 2021 alone, five NWSL coaches and a GM for a fifth club (nearly half the league) have been fired or resigned amid allegations of abusive behavior ranging from calling players overweight to Riley’s sexual coercion. This isn’t just an NWSL problem, but you can understand why players like Megan Rapinoe have called to “burn it all down.”

Here’s a short timeline of abuse in women’s soccer over the last 15 months.

Aug. 26, 2020 — Paris Saint-Germain coach Olivier Echouafni is seen groping a player on the sideline during a Champions League semifinal.

Echouafni remained coach until this summer, when his contract was not renewed despite leading the club to its first-ever top-flight league title.

Aug. 28, 2020 — Dell Loy Hansen, owner of Utah Royals of the NWSL and Real Salt Like in MLS, comes under fire for racist and sexist comments. He is eventually forced to sell both clubs.

Hansen had previously allowed a toxic culture to permeate the clubs. In 2019, he waited two full weeks before firing Mike Petke for repeatedly using a homophobic slur toward a referee.

Staying in Utah, Royals coach Craig Harrington was placed on administrative leave in September 2020 along with assistant coach Louis Lancaster. Harrington was eventually fired in November for contributing to the toxic atmosphere around the clubs, including making inappropriate sexual comments. It’s also been reported he overstated his qualifications and treated the people around him poorly. Soon after his firing, the Utah Royals essentially relocated to Kansas City.

After he was fired in Utah, Harrington did what so many of these men often do: land on his feet. In June, he got a new head coaching gig despite questions over his qualifications.

When Benstiti left the club, the Reign praised his efforts at the club and thanked him for his service. In the months since, it’s become clear he should have been fired and not allowed to resign.

Recent reports have brought to light Reign CEO Bill Predmore requested Benstiti’s resignation after reports of verbal abuse, such as inappropriate comments over players’ fitness and nutrition, issues that had long been public after Lindsey Horan dealt with him while playing at PSG.

While getting Benstiti out of the league was good, the fact these comments were never made public is concerning and yet more evidence of a systemic problem.

After appearing to have turned Gotham in the right direction, LaHue was fired on July 9, though the termination wasn’t actually announced until a week later. So far, few details have come out over why she was fired other than Gotham saying it was over the anti-harassment policy. LaHue has denied wrongdoing but has not explained what she is accused of doing.

It’s a reminder there are women in places of power who are at fault as well, even if the overwhelming majority of abusers are men.

While not linked to any sort of abuse, Skinner’s inclusion on this list is merely to point out how often men fail upward in women’s soccer. Despite turning in a pathetic record of 9-22-12 — winning just 20 percent of matches — at a club with Alex Morgan, Marta, Sydney Leroux and Krashlyn, Skinner was hired to coach Manchester United, one of the biggest clubs in the world.

Women’s soccer is way too inundated with mediocre white men. But at least former Three Lionesses coach Phil Neville left the women’s game to coach Inter Miami after he repeatedly failed to get a loaded England squad to a major final. Now he can lead David Beckham’s club to mediocrity.

The story of Burke is a microcosm of so many problems in women’s soccer. Initially the Spirit said Burke was joining the front office over health concerns, then the story was that he resigned or was suspended. Finally, the club fired him on Sept. 28. Had it not been for reporting from the Washington Post, he might still have a job.

The damning WaPo report detailed alleged verbal and emotional abuse by Burke. It’s embarrassing the club tried to quietly sweep Burke out the door when it should have just fired his ass. But, as usual, it wasn’t the first issue the club has had; former owner Bill Lynch (now a minority owner) has for many years been accused of being homophobic.

Holly was announced as Racing Louisville’s first head coach on Aug. 12, 2020. At the time, we lamented it was yet another man joining the NWSL’s coaching ranks; there was just one female coach in the league then. Even a year ago, there were questions over his “strained and odd” relationship with players.

Just over a year later, Holly was fired with cause. Like LaHue’s termination, we’ve yet to learn what exactly forced the club’s hand, though local reports have suggested he created a “toxic environment.”

We’ve already detailed why Riley was fired, but it’s worth bringing up one more point: Riley was allowed to quietly leave Portland after allegations over misconduct arose in 2015, but he was still allowed to become the coach of Western New York Flash months later.

Riley certainly had a pattern of abuse, but so too has women’s soccer, in which mostly male owners have repeatedly hired other men who have a history of abuse.

After initially claiming the report from The Athletic was the first she was hearing of the allegations against Paul Riley, Baird was forced to resign when Alex Morgan brought the receipts, showing she was made aware of them at the very latest in April. It was clear then that Baird had to go and major reform was needed in the league and women’s soccer overall.

Rory Dames led the Chicago Red Stars to the 2021 NWSL Championship game before falling to the Washington Spirit. The next day, the Red Stars issued a press release saying Dames was resigning to focus on his family. A few hours later, a Washington Post article detailed years of alleged emotional and verbal abuse, some of which was first reported seven years earlier by Christen Press.

A few months later, more allegations came out against Dames, including accusations of sexual abuse.

James Clarkson was the only NWSL coach to maintain his post for the entire 2021 calendar year, but he didn’t last much longer. The NWSL’s investigation into abuse and harassment in the league suggested the coach be suspended and the Dash immediately obliged, without making public the allegations against him.

So, where do we go from here? Nearly every team in the NWSL has been involved in some sort of abuse scandal and the commissioner is gone. There’s more abuse happening around the world in women’s soccer that is not widely reported, whether it’s Jamaica’s Reggae Girlz going on strike for not getting paid or women’s players having to be evacuated from Afghanistan out of fear of death.

The answer is more. What women’s soccer needs is more money in the leagues, so players don’t feel they have to put up with blatant sexism, racism, misogyny and homophobia just to secure a paycheck. More effort put forth by those hiring coaches, so these same mediocre men don’t keep getting second, third, fourth chances to abuse women. More women in positions of power (owners, coaches, etc.) to make the decisions necessary to protect the players. More attention from media outlets, so these stories don’t go unheard and ESPN doesn’t suddenly discover the NWSL exists only when there’s a scandal to report.

Women’s soccer needs so much more because it’s fighting decades of oppression from men, the same type of men who continue to abuse their power and abuse these athletes.