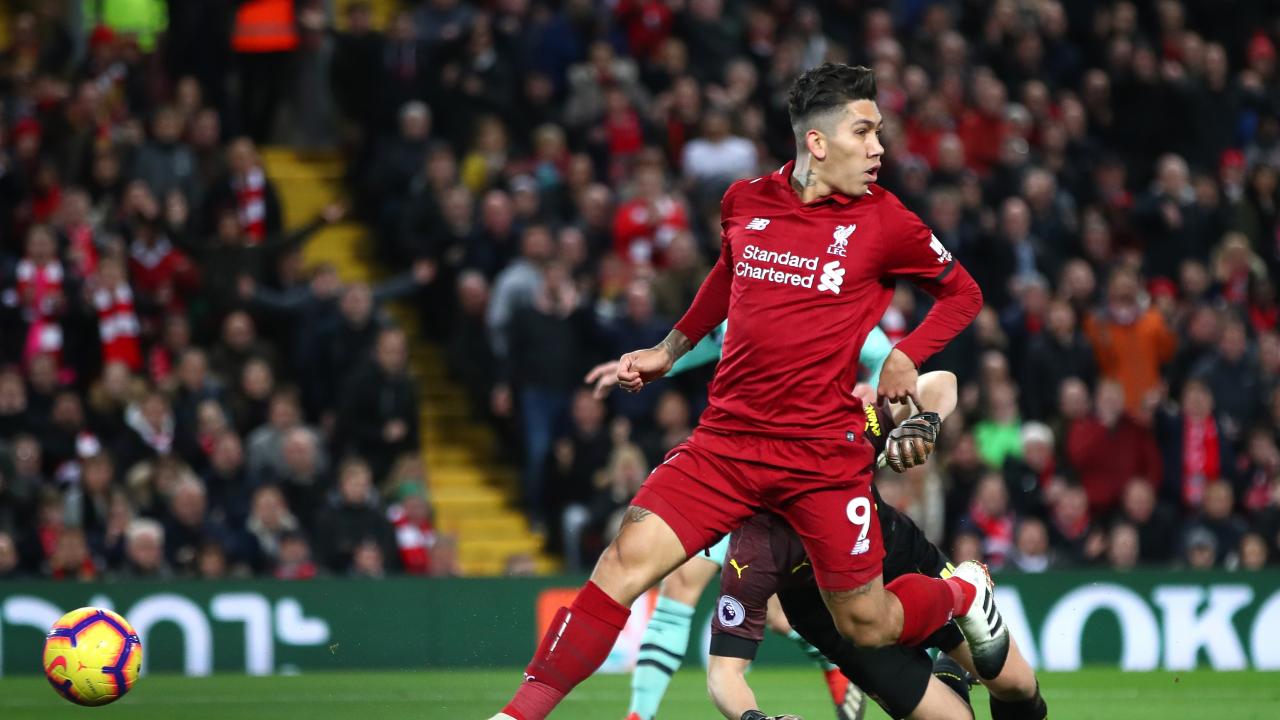 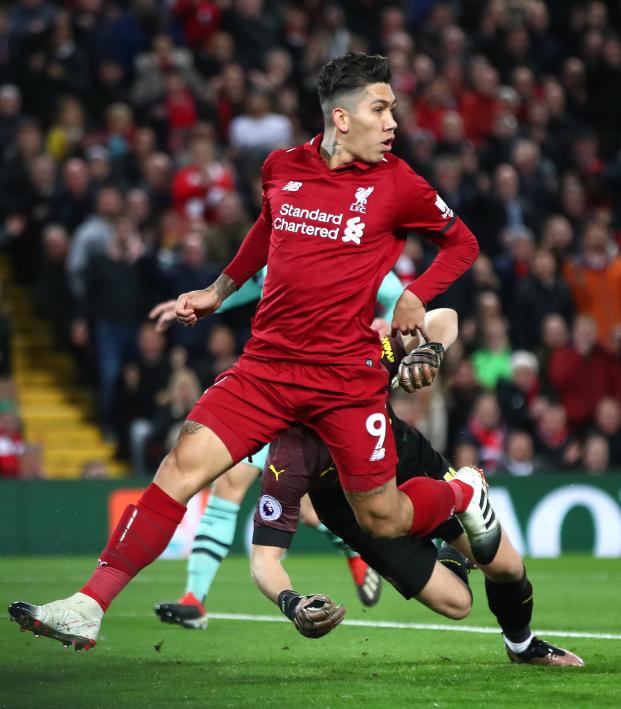 Travis Yoesting December 29, 2018
Liverpool opened up a nine-point lead in the Prem with a dominating 5-1 victory over the Gunners.

Arsenal shook off a shaky opening minute to take a surprise lead against Liverpool on Saturday at Anfield. Then one moment of madness — and a Bobby Firmino no-look goal — opened the floodgates for Liverpool’s 5-1 victory over Arsenal.

The win put the Reds nine points clear at the top after Tottenham’s stunning 3-1 loss to Wolves earlier in the day, though Manchester City could cut that to seven with a win over Southampton on Sunday. Liverpool has won nine straight in the Premier League since a 1-1 draw with Arsenal in November.

All five Liverpool goals came after the Gunners, who have failed to win any of their last three Premier League matches, took the lead in the 11th minute.

Arsenal looked miserable in the opening minutes, unable to deal with Jurgen Klopp’s pressing. But once the Gunners realized they could find success lobbing the ball over the top of the press, it was Liverpool that came under pressure.

It was through this pressure that Arsenal struck first, a turnover turning into a quick counterattack and Ainsley Maitland-Niles turning in a cross from Alex Iwobi in the 11th minute to briefly quiet the Anfield faithful.

But it was all Liverpool from then on. Three minutes after Arsenal took the lead, the Reds completely changed the game with one Firmino no-look goal.

In the 14th minute after a strong tackle on Mo Salah, Stephan Lichtsteiner hit his clearance off Shkodran Mustafi right into the path of Firmino, who couldn’t believe his fortune to tap in the equalizer.

It was a crap goal, but Bobby put his own flair on it with his now-trademark no-look style.

The strike opened the floodgates for Liverpool, which added three more before the end of the half against an Arsenal defense that has fallen to shambles since an injury to Rob Holding.

Two minutes after his first, Firmino truly turned on the style for a much prettier goal.

After Sadio Mané dispossessed Lucas Torreira in midfield, Firmino danced around two Arsenal defenders and ripped a shot past Bernd Leno to give the Reds their first lead in the 16th minute.

After two from Firmino, Liverpool’s other two star forwards combined to make it 3-1 in the 32nd minute. Arsenal defenders forgot to track the run of Salah after a cleared corner kick and the Egyptian superbly cushioned a long pass into the path of Mané, who simply had to score from the edge of the six-yard box.

It was 4-1 before halftime thanks to a penalty kick earned and converted by Salah. The play began with a brilliant pass from Alisson to Firmino, who played Salah into the box. The Egyptian, who took a fairly blatant dive against Newcastle on Boxing Day, dipped in front of Sokratis Papastathopoulos and slowed down, falling to the pitch at the first sign of contact from the Arsenal defender.

Michael Oliver pointed to the spot and Salah smashed his penalty right down the middle, off Leno’s hands and into the back of the net.

Salah’s goal gave Liverpool a 4-1 halftime lead and put Salah even atop the Premier League Golden Boot race, tied on 13 with Harry Kane and Pierre-Emerick Aubameyang, who did very little for Arsenal in the first half with his strike partner Alexandre Lacazette left on the bench.

In the second half, Oliver compounded Arsenal’s misery by calling a penalty on Sead Kolasinac, who shoved Dejan Lovren too hard for the referee's liking on a corner kick. While some one argue that sort of contact happens all the time in the box, Liverpool fans would argue it’s still a foul and Arsenal fans would argue who the fuck cares can we just go home now?

We're a bit disappointed we didn't see another Firmino no-look goal on the penalty, but there can be no complaints with the output from Liverpool's Brazilian striker.

Arsenal, meanwhile, couldn't get any love from Oliver. Lacazette, who replaced Aubameyang in the second half, was kicked by Nathaniel Clyne in the box but the referee waved play on and Arsenal failed to find another way past the Premier League's best defense.

Next up for Liverpool is perhaps the biggest match of the season: against Manchester City at the Etihad on Thursday. A win there would put Liverpool at minimum 10 points ahead of the defending champs and all but end the title race in the first days of January.

Now, while you're here, in case you didn't get enough goal action already, here's a Bobby Firmino no-look goal montage from earlier this year.