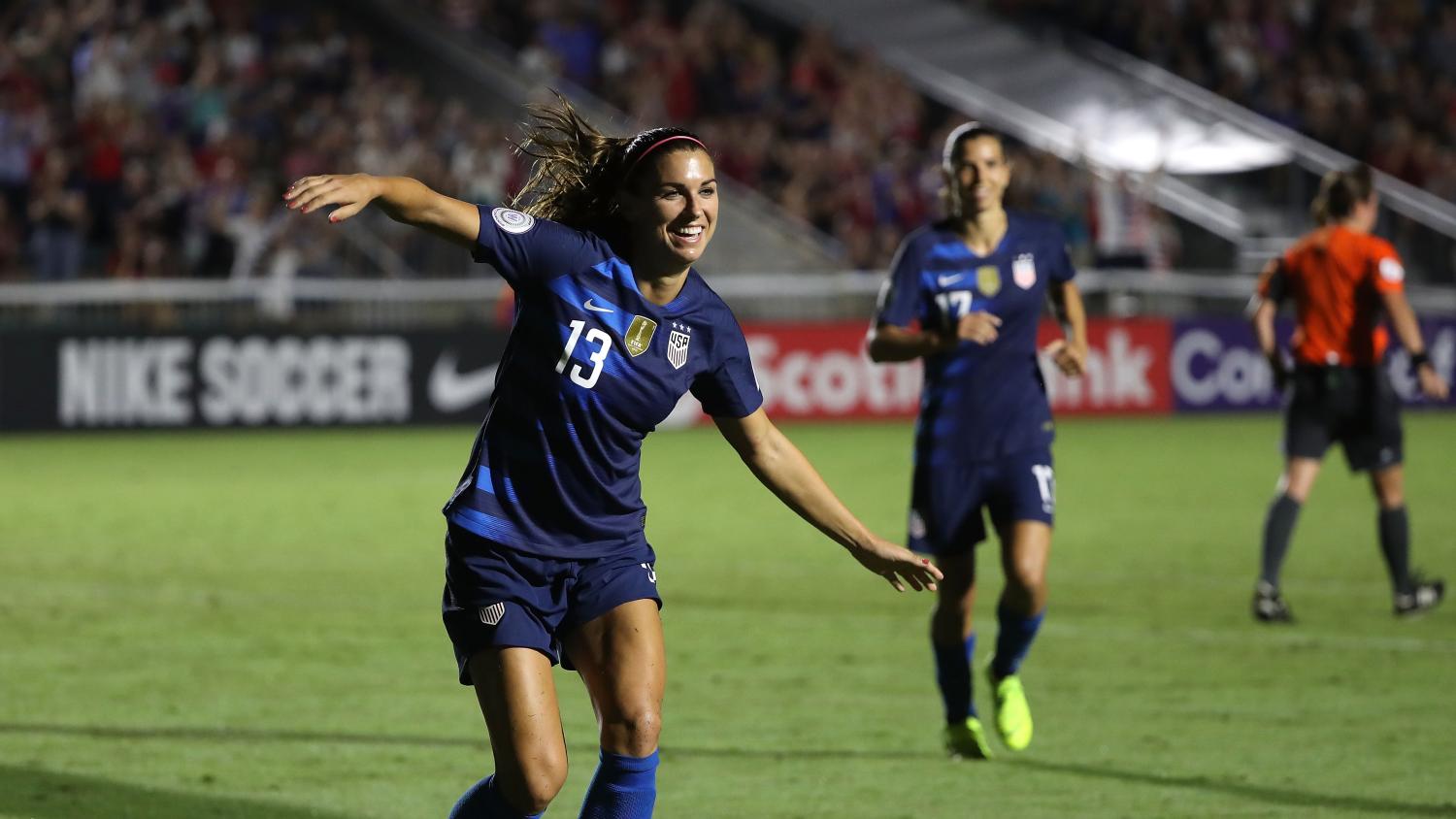 The U.S. women are laying waste to all comers in the Women’s Concacaf Championship.
Getty Images

On a rainy night on Thursday in Cary, North Carolina, the U.S. women’s national team blasted 59 shots toward the goal of Saundra Baron, a 24-year-old former East Carolina University goalkeeper. The Trinidad and Tobago net minder blocked a Tim Howard-esque 15 shots and was saved by the post countless other times in a heroic performance.

And the USWNT still scored seven goals and probably should have had many more.

Such is the domination of the U.S. women during the Concacaf Women’s Championship this month, which doubles as qualifying for the 2019 World Cup.

The USWNT stats from the team’s first three matches are absolutely staggering. In Group A play, the U.S. won all three of its matches in shutout fashion, racking up 18 goals in the process to advance to the semifinals with ease. Panama joined the U.S. in the knockout rounds by winning two games by at least two goals and yet Panama had a goal difference of 0.

But that’s just the tip of the iceberg for these insane USWNT stats.

Let’s start with goals, because that’s really the only state that matters.

The U.S. averaged six goals per match while conceding none; it doesn’t get much better than that, though it honestly could have. Jill Ellis basically used a second team against Panama, so that score line might’ve been higher had the likes of Alex Morgan, Megan Rapinoe and Tobin Heath led the line.

The U.S. has blitzed teams at times, scoring at least four goals in at least one half of each match. The second half against Mexico was the best we’ve seen from the USWNT so far, scoring five times against a team that came into the tournament as the third-best team in Concacaf (though El Tri didn’t live up to those expectations).

A staggering 10 different players have scored a goal for the U.S. through three matches. That accounts for nearly a third of the total number of goal scorers in the entire tournament thus far (though Canada has yet to play its third group-stage match). This shows the massive depth Ellis has at her disposal, as illustrated by the fact former world player of the year Carli Lloyd is basically a second teamer and scored a hat trick against Panama.

Alex Morgan leads the team with four goals (joint leader in the tournament thus far with two Canadians who scored four apiece in a 12-0 rout of Cuba). Lloyd has her three goals while Tobin Heath, Rose Lavelle and Megan Rapinoe have two goals apiece. Crystal Dunn, Julie Ertz, Lindsey Horan, Sam Mewis and Christen Press have all scored once.

The only thing missing is for Becky Sauerbrunn to finally score.

I want @beckysauerbrunn to score so bad! But what I love most about this is that she is always checking percents of success instantly. She knows that the pass is the better option to score. This is a tourney and goals matter. Leaders know this and plays like this are the result https://t.co/zUsaULAp8E

Next up, the primary USWNT stat leading to goals: shots.

The U.S. took 117 total shots in group play, an average of 39 per match, which is just nuts. For comparison, Manchester City leads the Premier League by a large margin in shots per game with 21.75. The Premier League average right now is 12.7 shots per match (per team).

The Trinidad and Tobago match in particular stands out, with the U.S. taking 59 shots. That’s more than a shot every other minute.

Of course, shots only help if they’re on target. While the 42 percent rate of shots on target isn’t anything stellar, I don’t think many coaches would complain about putting more than 16 shots on target per game.

On the flip side, the U.S. defense has allowed seven shots total, including none from Trinidad and Tobago. Two shots, one each from Mexico and Panama, were on target. So that’s one USWNT stat that will be at the bottom of the tournament table: saves. Not that anyone minds when you’re pitching shutout after shutout.

Another stat in which the U.S. has been stupidly dominant is passing numbers and possession. Despite taking 39 shots per game, actions that typically end an offensive possession, the U.S. has maintained on average 72 percent possession.

The USWNT passed with supreme accuracy in all three matches: over 80 percent each time out. The Americans completed 1,707 passes compared to just 699 from their three opponents (596-233 on average). Trinidad and Tobago completed just 149 passes all match with a shocking pass accuracy of 38 percent.

The ability of the U.S. to keep possession humming along with slick passing while breaking up the opponent’s play is a major reason why the team is ranked No. 1 in the world right now. This has led to the U.S racking up 34 corner kicks while conceding four.

The U.S. hasn’t led in every statistic, however. The USWNT stats for fouls are dead even with opponents (26 apiece). And the Americans have been whistled for offside more than five times as often as opponents (16-3), though it’s hard to be offside when you don’t have possession in the opponent’s half, as has been the case against the U.S.

It’s hard to find faults for a team that has been as dominant as the U.S. women.

Of course, it’s only going to get harder. While a semifinal against either Costa Rica or Jamaica (probably the latter considering Costa Rica still has to play Canada) likely won’t trouble the Americans too much, a final against Canada, the fifth-ranked team in the world, will.

Canada has racked up stats of similarly staggering nature, including a 12-0 romp over Cuba. In that match, the Canadians put up 52 shots, 25 of which were on target. Canada’s shots-per-match average is just three less than the U.S.

I guess what we’re getting at here is that Concacaf is a bit top-heavy in women’s soccer, more so than on the men’s side. The U.S. and Canada are two of the best national teams in the world and they’re going up against opponents who are completely overmatched.

The U.S. and Canada are the only two Concacaf countries to have ever won a World Cup match (no one has won more than the USWNT with 33 wins). Mexico and Costa Rica, the only other two countries to even qualify for the World Cup from Concacaf, have a combined seven losses and five draws with a -25 goal differential (though -24 of that belongs to Mexico).

But we’re almost guaranteed to have a new representative from Concacaf at the 2019 World Cup. Unless Costa Rica can pull off a massive upset of Canada (or if Cuba can somehow ignore its -20 goal difference to stun Jamaica), either Panama or Jamaica will qualify for the World Cup as at least the third-place team. Plus, the fourth-place finisher will take on Argentina in an intercontinental playoff for the final berth to the 2019 World Cup.

Can the quality of the U.S. and Canada raise the other Concacaf teams to a competitive level at the World Cup? Probably not; right now it seems they’re just practicing to get smoked by the rest of the world.

USWNT Stats vs. Trinidad and Tobago