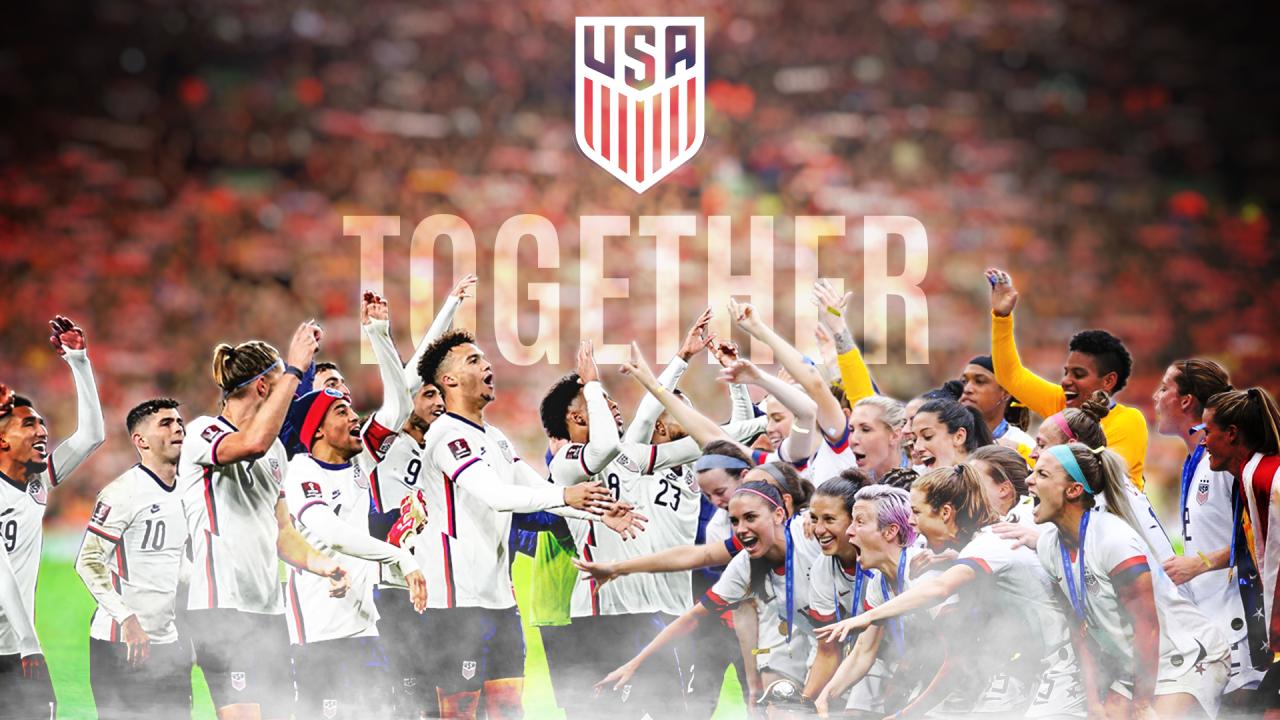 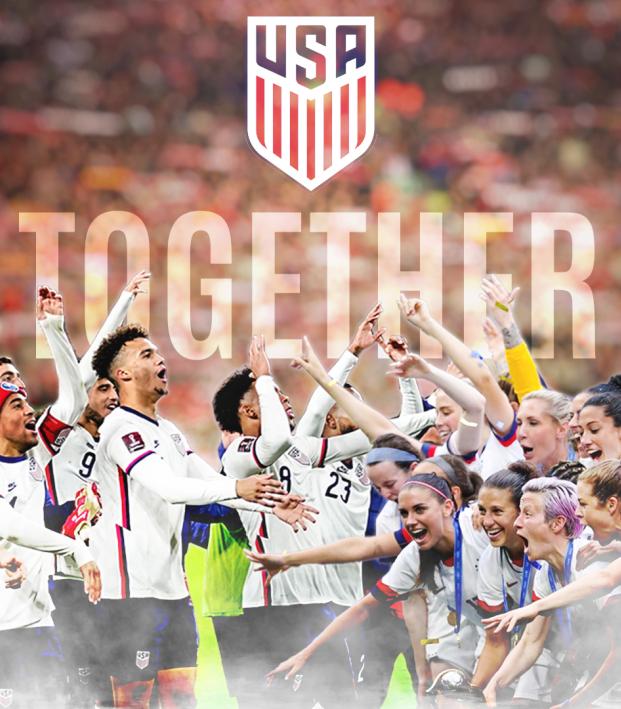 After decades of battling, the U.S. Soccer Federation has agreed to pay its men’s and women’s players equally, a landmark deal and the first of its kind in the soccer world.

The Collective Bargaining Agreements, agreed upon by the USSF, USWNT and USMNT, equalizes pay between the teams, working around FIFA’s unequal prize money by pooling all prize money to be evenly divided among the athletes. While other countries have agreed to pay men’s and women’s players the same on a per-game basis, the U.S. is the first nation in the world to pool FIFA prize money like this.

In a historic accomplishment, U.S. Soccer, @USMNT and @USWNT have come together to agree to new collective bargaining agreements that will run through 2028 and achieve true equal pay – including equalization of World Cup prize money.

If you’re reading the news today thinking: Wait, didn’t this already happen? You’re not entirely wrong. In February, the U.S. Soccer Federation agreed to equalize the CBAs (and awarded the women’s players $24 million), but it was contingent on the Federation and the players associations for the men and women all coming to an agreement. That is what we are celebrating today.

“This is a truly historic moment,” U.S. Soccer President Cindy Parlow Cone said in a letter to fans. “In becoming the first federation in the world to solve the massive and vexing challenge of equalizing FIFA World Cup prize money, U.S. Soccer and our players have changed the game forever here at home, with the hopes of inspiring change around the world.”

Wednesday’s announcement was historic. The women’s national team has been fighting for equality since it debuted in 1985. After winning the 1999 Women’s World Cup, the players (including Parlow Cone) boycotted a 2000 tournament in Australia over pay disputes. In the mid-2010s, multiple lawsuits were filed against the Federation over unfair pay and gender discrimination.

Now, the men and women will be treated almost entirely equally (more on the few disparities below). This was the only logical conclusion for U.S. Soccer, which is a non-profit organization tasked with growing the sport.

Under the new agreements (each players association signed separate but nearly identical CBAs), the U.S. Soccer Federation will pool prize money from tournaments like the World Cup and Gold Cup (any competition played by both teams) and divide that money equally between the players. For the 2022 and 2023 World Cups, the players will receive 90 percent of the prize money (split evenly), the Federation taking the rest. Players on both teams will also share profits from broadcast, commercial and sponsorship revenue plus ticket sales while receiving 401(k) benefits and childcare. Working conditions will be equalized across the board, with equal field surfaces, staffing, hotel accommodations and charter flights for both teams. 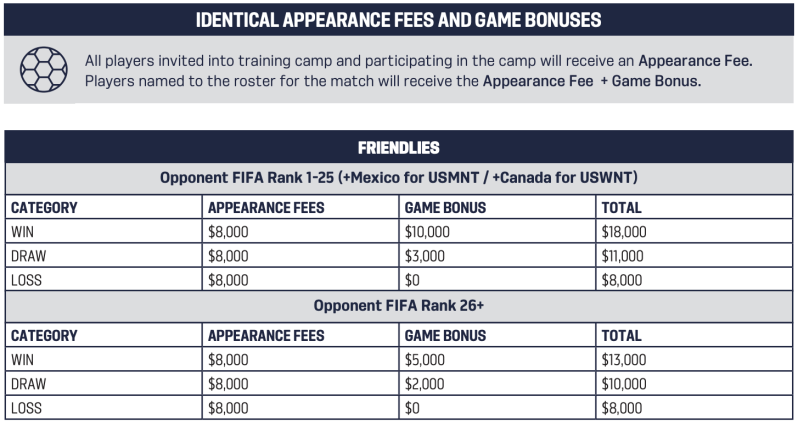 The only significant difference between the two deals will be the inclusion of a few extra benefits for women’s players: parental leave, insurance benefits and short-term disability. These added benefits are in acknowledgement of the fact the USWNT has more major tournaments because the Olympics are a senior-level competition on the women’s side and a youth competition on the men’s side.

“The accomplishments in this CBA are a testament to the incredible efforts of WNT players on and off the field,” USWNT player and USWNTPA President Becky Sauerbrunn said. “The gains we have been able to achieve are both because of the strong foundation laid by the generations of WNT players that came before the current team and through our union’s recent collaboration with our counterparts at the USNSTPA and leadership at U.S. Soccer. We hope that this agreement and its historic achievements in not only providing for equal pay but also in improving the training and playing environment for national team players will similarly serve as the foundation for continued growth of women’s soccer both in the United States and abroad.”

Equal pay for equal work with US Soccer ✅
Such a historic moment for this team, so proud of all the work put in to make this happen. https://t.co/BNTDz06nvx

One of the biggest takeaways from the new deals is that members of the men’s team will benefit financially when the women’s team does well and vice versa, creating incentive for everyone to work together to further the sport in America.

I just wonder if soccer fans in the U.S. will follow suit.

Despite the growth of soccer in America, U.S. national team fandom is in a weird place. The USWNT is reviled by a huge population of the country because of the players’ willingness to fight for social progress and human rights. (I wrote a brief history of why people hate the USWNT last year.) The USMNT, meanwhile, has a large legion of haters as well, some of the animosity stemming from the team’s failure to qualify for the 2018 World Cup but much of it unfounded bitterness grounded in American exceptionalism that has no legitimate basis in soccer.

With the two teams coming together for a momentous CBA agreement, perhaps now soccer fans in this country can also come together and just support the teams. I’m not saying everyone must always be 100 percent positive about the teams — certainly there are reasons to criticize both squads from a sporting perspective. But personally, I grow tired of the toxicity surrounding both teams on social media, usually based on outdated information and with little regard to what either team has accomplished. I don’t believe this toxicity comes from the majority of fans, but it is a loud minority.

Social media is already full of people blasting the USSF for caving to the women, accusing the Federation of subsidizing a failing product or arguing men are superior to women and thus should be paid more (an argument once made by USSF lawyers).

Besides forgetting U.S. Soccer is a non-profit, many people simply don’t believe women deserve equality. Many still believe the women don’t make as much money as the men, when in truth the teams regularly trade off which is more profitable. Not that it matters — both teams should be treated equally regardless of profitability, but even that statement is blasphemous to misogynists. The only reason anyone could hate this agreement is if they don’t believe women should receive equal pay for equal work, and unfortunately a lot of those people exist in this country. Fortunately, the players are not among that number.

I’m extremely proud we’ve managed to come to this agreement. It took a lot of work but finally we got it done!! https://t.co/YFKh6WsmrO

This agreement will not stop the haters. People will still despise the USWNT and USMNT long after Megan Rapinoe and Gregg Berhalter are gone. But the CBAs are a real reason to celebrate after decades of turmoil in U.S. Soccer.

For perhaps the first time in its history, we as Americans can be proud of the U.S. Soccer Federation. We can be proud of the men’s and women’s national teams working together to create a level playing field, to close the gender pay gap and to prove to the world FIFA’s unequal prize money can be equalized. For once, U.S. Soccer is a leader in global soccer for reasons beyond its women’s team kicking ass.

“They said equal pay for men and women was not possible, but that did not stop us, and we went ahead and achieved it,” said Walker Zimmerman, member of USNSTPA leadership group. “We hope this will awaken others to the need for this type of change and will inspire FIFA and others around the world to move in the same direction.”

Equal pay for equal work may be novel in soccer, but it doesn’t have to be. Here’s to the U.S. Soccer Federation for finally doing what’s right and setting an example for the world to follow, even if shortsighted haters will criticize the Federation for doing so.