What’s The Deal With Christian Pulisic’s Face In FIFA? 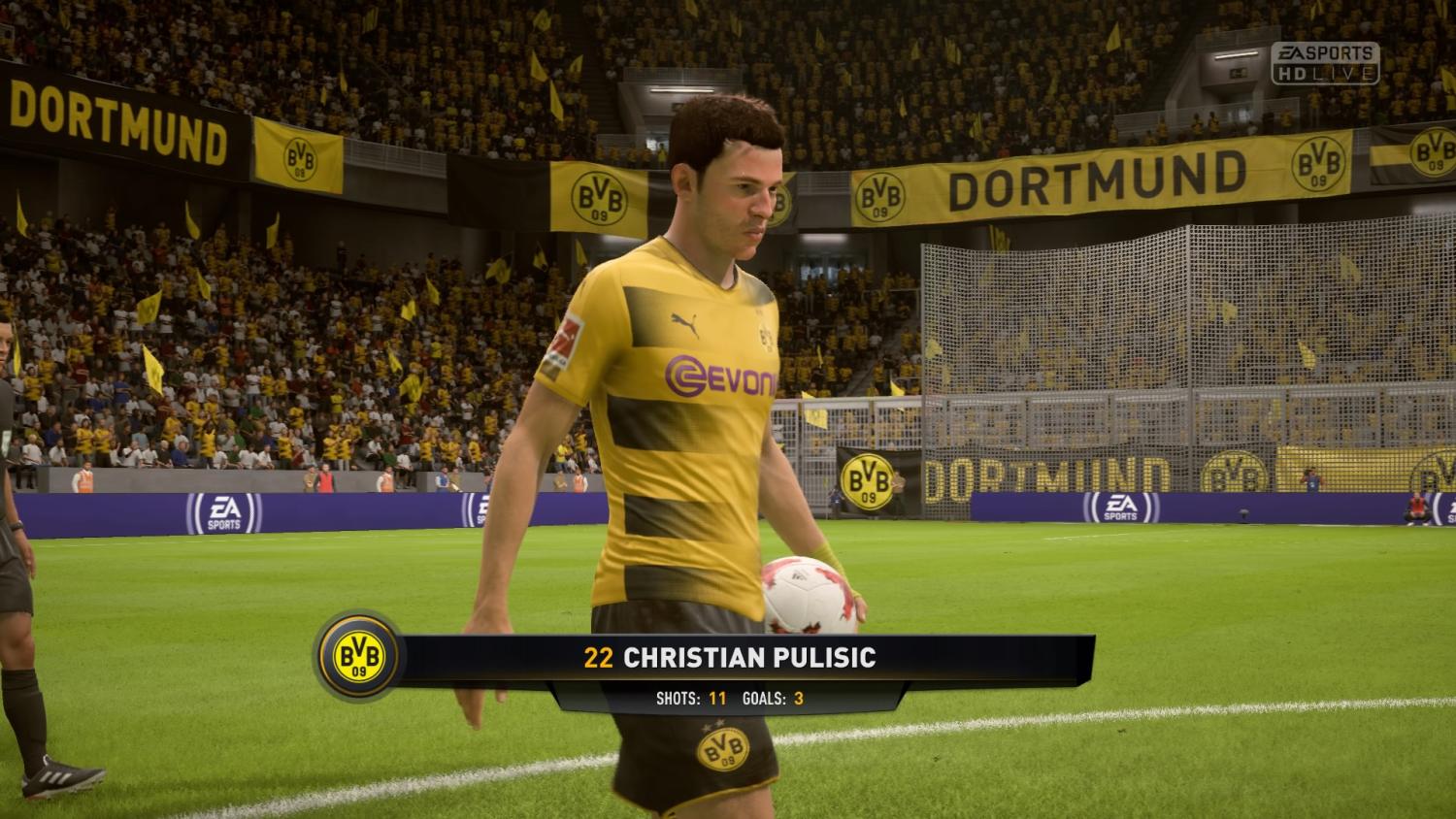 USMNT and Borussia Dortmund star Christian Pulisic gets absolutely no love from FIFA 18 with an ugly avatar and a low stat rating.
FIFA 18

Christian Pulisic is kind of a big deal, and not just in the United States. He’s one of the few reasons to get excited about American soccer over the next couple years, and he’s one of Borussia Dortmund’s star performers this season. Heck, he recently nutmegged Dutch star Arjen Robben.

But the kid can’t get any respect in perhaps the most important aspect of the footballing world: FIFA 18. From his skill rating to his avatar, the FIFA 18 version of Christian Pulisic does not match up with the real life version of the teenager from Hershey, Pennsylvania.

Let’s start with this avatar. FIFA goes to painstaking detail to recreate the faces of most of the top players in the game. Check out the detail in Cristiano Ronaldo’s in-game face compared to his actual appearance. EA Sports got every detail down to the mole on his left cheek. 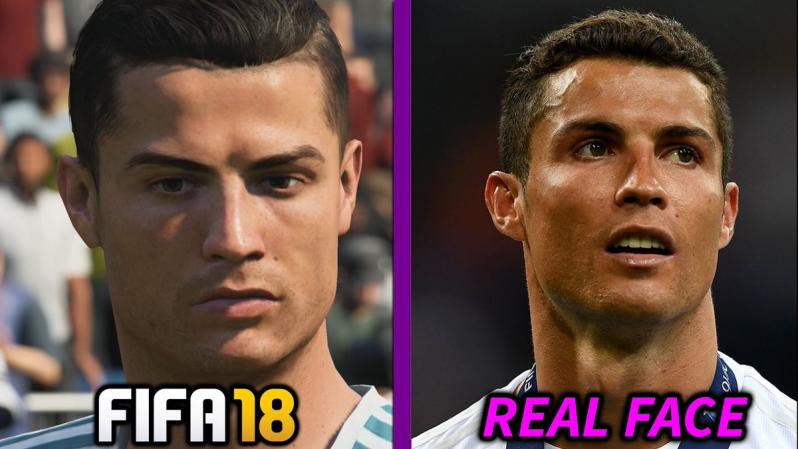 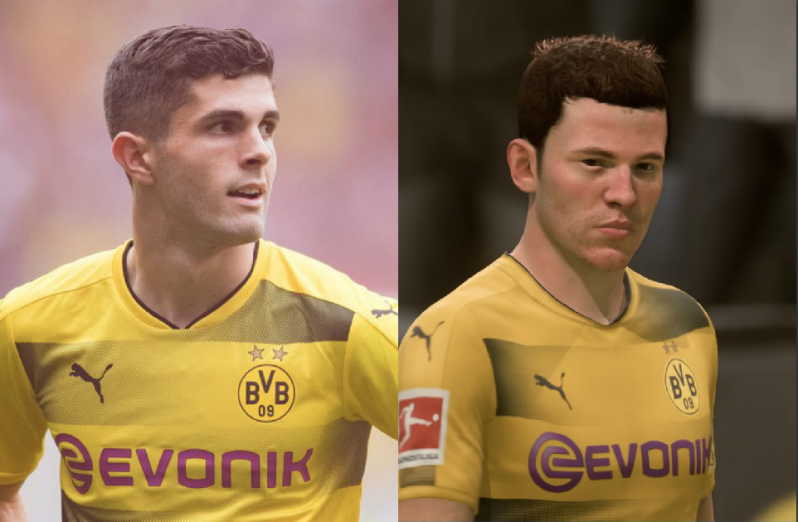 Can you tell which is the real Christian Pulisic?

It’s hard to pinpoint exactly what is wrong with his face, but it’s just wrong. There’s no uncanny valley, just an uncanny hideousness. Pulisic is a good-looking lad and FIFA makes him out to be some sort of monster. His avatar in last year's FIFA 17 was actually much worse.

Pulisic is a star on a Champions League team but EA apparently didn’t spend much time making sure his avatar looked anything like him. By comparison, fellow USMNT goal scorer Jozy Altidore looks a little more like his real-life counterpart, but would you ever guess the guy on his back in this pic is Pulisic? 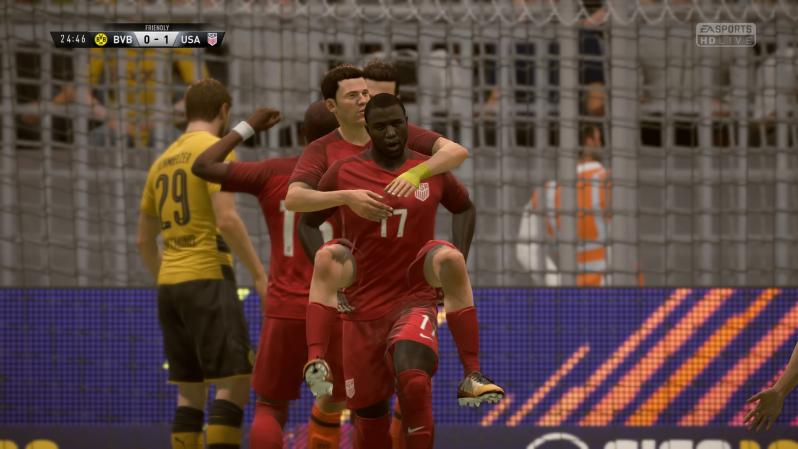 Yes, this should be the other way around, with Pulisic carrying Jozy (and the U.S.) on his back.

Altidore doesn’t look too much better, but at least he’s a little closer to the real thing. And when you compare Pulisic’s appearance to his avatar in Konami’s Pro Evolution Soccer, the difference is night and day. 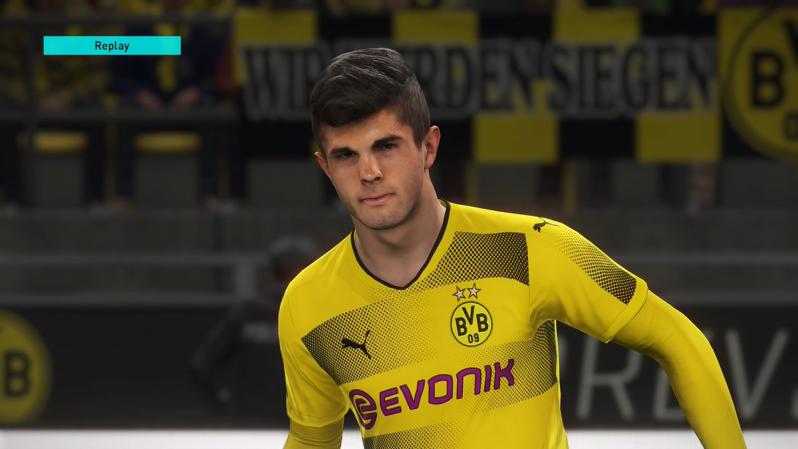 But it gets worse for Pulisic. His stats do not match up with a player who was the best player on his team in Der Klassiker over the weekend.

The base Christian Pulisic FIFA rating for the game is 78. While he’s given excellent pace (93 acceleration, 89 sprint), his dribbling is an overall 83. The man who has seven goals and seven assists in 13 career World Cup qualifiers has just a 68 in shooting and 70 in passing. (PES also rates Pulisic at 78 overall.)

The 78 overall rating ties him with Clint Dempsey, Tim Howard and Michael Bradley for third best among Americans. John Brooks leads the way with an 80 while Fabian Johnson is 79. Pulisic has proven himself to be the most talented American player but FIFA hasn’t gotten on the bandwagon. I’m not saying Brooks and Johnson should be lower, but Pulisic should be higher — at least 80 but probably closer to 82. 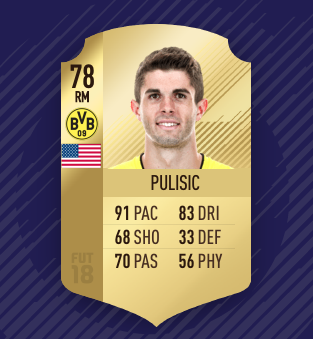 Compared to his Dortmund teammates, Pulisic looks even worse. The German club has 17 players with a higher rating than Pulisic. Yet Pulisic has played in every Bundesliga and Champions League game this season. Only goalie Roman Burki and 88-rated striker Pierre-Emerick Aubameyang can say the same. Coach Peter Bosz is having a rough season, but he’s not so dumb as to play a guy who’s the 18th or 19th best on his team in every match.

Pulisic has had a rough couple of months. The USMNT missed out on the World Cup for the first time since 12 years before Pulisic was born, Dortmund has struggled mightily in the Champions League and they’ve already fallen behind Bayern Munich by six points in the Bundesliga. FIFA’s disrespect doesn’t do any favors to the 19-year-old.

Fortunately Pulisic will get a bit of a vacation this weekend during the international break after USMNT interim coach Dave Sarachan decided not to call him up for the Portugal match. Let’s just hope Pulisic doesn’t spend that time playing FIFA.