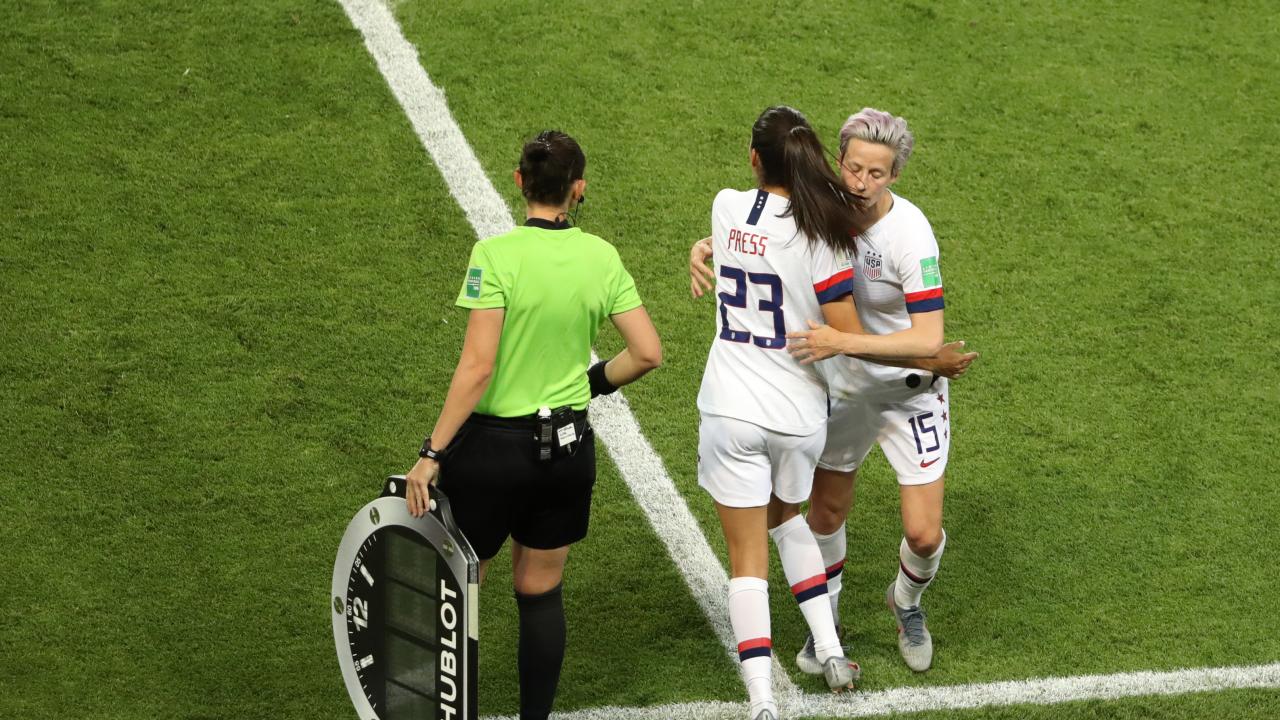 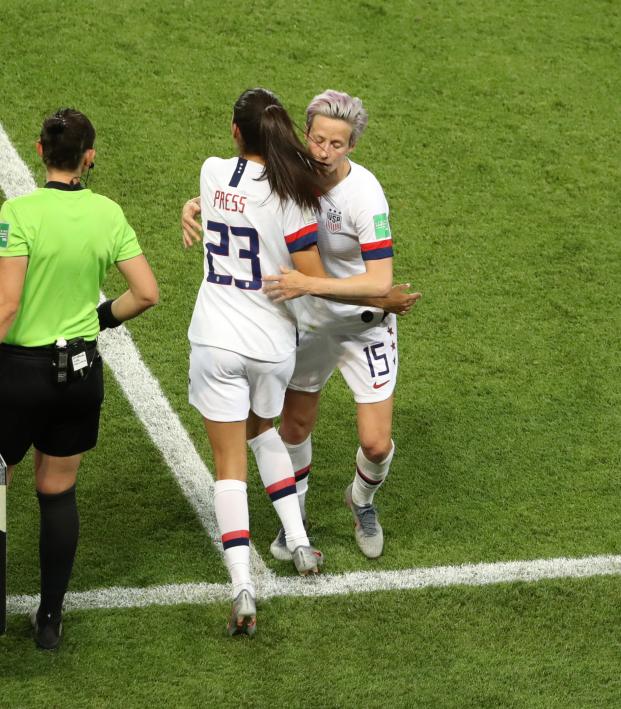 OK, so hear me out. I understand that Rapinoe has had an excellent World Cup performance thus far, and she deserves an immense amount of credit for helping get the U.S. to the final. However, when watching the U.S. play England on Tuesday, I saw something that I hadn’t seen from the USWNT all tournament: cohesion on both sides of the ball.

OH WHEN THE YANKS...

When the lineups for the semifinal were announced, revealing Rapinoe wouldn’t be starting, I thought the move was a tactical masterstroke on the part of Jill Ellis, as I felt Rapinoe wouldn’t have the pace to keep up with a world-class right back like Lucy Bronze. I was disappointed to see that the coaching decision was injury related, but nonetheless excited to see how the team performed with Press instead of Rapinoe.

I’ll be the first to admit the U.S. by no means played perfectly, but what I did notice is that there were certain aspects of our game that were far more effective without Rapinoe on the field, compared to the with her. Here are the three key reasons why Press should be starting on Sunday

No. 1: Press Can Pressure

One thing I noticed when Press was on the field instead of Rapinoe was how much more difficult the USWNT was making it for England to distribute the ball. England has used its wide backs all tournament as offensive facilitators, with the backs making overlapping runs and getting into dangerous positions. Looking at White’s goal against Cameroon below, one can see how dangerous a player like Bronze is when she gets into the opposition's area.

Press kept Bronze occupied for most of the game, forcing Bronze to sit back further than she typically would due to the threat of Press’ speed. With Press and Heath closing down both wing backs, England was robbed of its most dangerous outlets when it came to starting the offense. Rapinoe, while certainly effective offensively, doesn’t have the closing speed of Heath or Press, which creates more holes in the U.S. defense. There’s a reason the U.S. subbed on Press for Rapinoe every time it takes the lead: Press makes it much more difficult for the opposition from a defensive standpoint than Rapinoe does.

Many of you will make the argument that the U.S. needs Rapinoe on the field because of her scoring ability, and I feel that is a totally rational argument to make. That being said, half of the goals she has scored are from set pieces: two being penalties and one being the softest free kick goal I’ve seen all tournament.

I’m not saying that her finishing ability hasn’t been clutch, it absolutely has, I’m just saying when it comes to comparing the two from a finishing standpoint, it’s a closer competition than you think. Press is actually a more efficient goal scorer than Rapinoe with the national team, with both women having scored 49 goals with the USWNT, but Press doing so in 37 fewer matches. Sure most of Press’ goals have come in qualifiers or friendlies, but if Tuesday was any indication, Press has no issues with performing on the big stage as well:

CHRISTEN PRESS! br>
No Rapinoe, no problem! The USWNT takes the early lead again and has now scored in the first 15 minutes in every single game this #FIFAWWC pic.twitter.com/Xqu3u0m56V

No. 3: USWNT Strikes A Balance

The issue with one player scoring all your goals, is that you start to look to them at every opportunity. I’ve noticed that in the knockout rounds, a lot of the offense has gone through Rapinoe, and, as a result, the team’s build-up play has slowed down. Rapinoe certainly knows how to pick a pass, but too often she has opted to try to beat her man instead of continue the flow of passing. On Tuesday, especially in the first 10 or so minutes, the Americans' ball movement was superb, everybody was contributing and no player tried to do too much herself.

And to those of you who think beating your man and creating your own chances is important...

I rest my case.