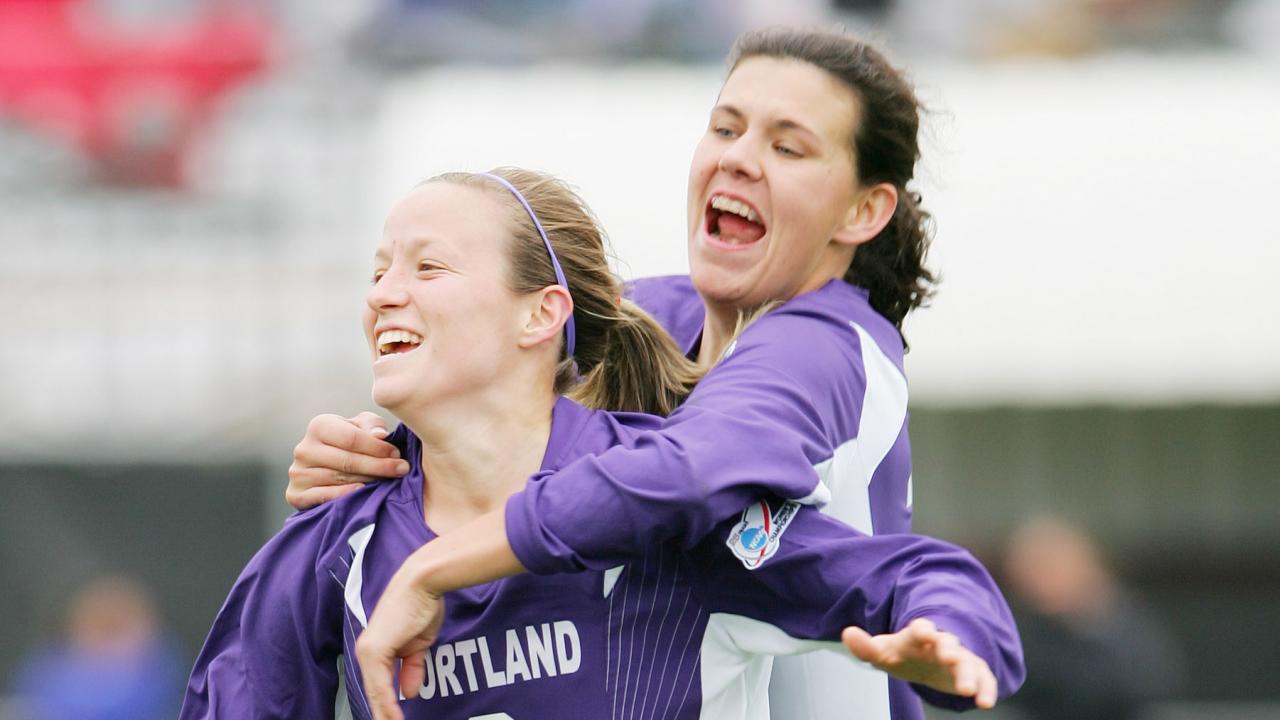 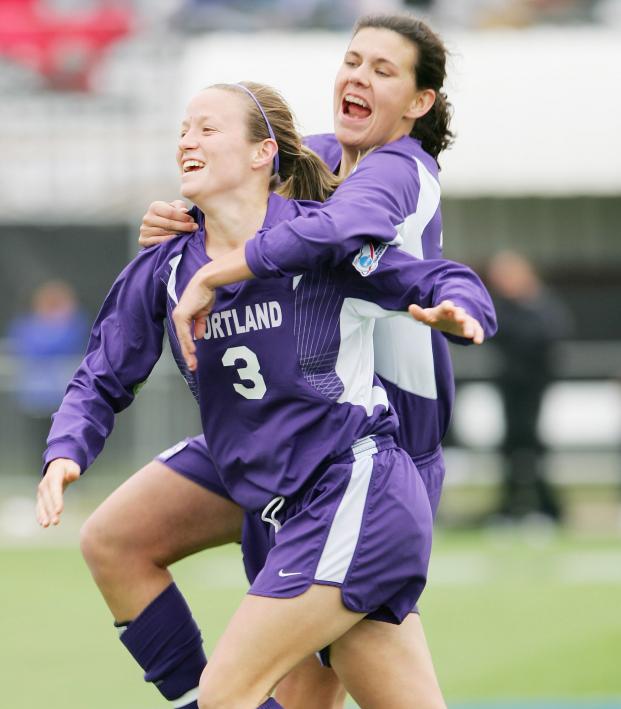 The NCAA women’s soccer tournament kicks off on Tuesday in North Carolina. Personally, every time the College Cup rolls around, I think about one of my biggest regrets from my college days: deciding it was too expensive to buy a ticket to attend the 2005 College Cup, which was walking distance from my dorm room at Texas A&M. Had I decided to forgo a few meals at Whataburger and Taco Cabana, I might have been able to afford a ticket to see what was, in retrospect, one of the greatest women’s college soccer teams ever assembled.

Had I made the walk over to Aggie Soccer Stadium, as I had a dozen times earlier in the year to watch G. Guerrieri’s Aggies, I would’ve seen two of soccer’s most iconic players cap an incredible season with a national title. Once upon a time, before they were legends at the international level, Megan Rapinoe and Christine Sinclair conquered college soccer together.

The Portland Pilots dominated the 2005 women’s college soccer season, becoming the second school to finish as an unbeaten champion with a 23-0-2 record. The Pilots won the title game 4-0 over UCLA for a second title in four years, a match I wish I had been smart enough to attend.

At the turn of the millennium, women’s NCAA soccer was still North Carolina and everyone else. In 2000, the Tar Heels won their 16th NCAA title — the rest of the country had won three titles combined. But that began to change in part thanks to the Portland squad put together by Clive Charles.

Charles was born in England and played for West Ham and Cardiff City before making the trek overseas to join the Portland Timbers in the late 1970s. He eventually turned to coaching and was hired as the Portland men’s coach and later the women’s coach simultaneously.

Charles, who was diagnosed with cancer in 2000, led the Pilots to their first women’s college soccer title in his final season, beating Aly Wagner’s defending champion Santa Clara 2-1 in the 2002 College Cup final, with then-sophomore Christine Sinclair scoring both goals.

Charles died less than a year later at the age of 51.

A soccer icon in Portland, Charles’ No. 3 jersey remains the only number retired by the Timbers. He played a role in the development of players like Sinclair, Kasey Keller, Steve Cherundolo, Tiffeny Milbrett and Shannon MacMillan.

Garrett Smith, an assistant of 10 years, took over the Pilots program in 2003. One of his best early moves as head coach was convincing twin sisters Megan and Rachael Rapinoe to attend the small, private, Catholic school over rival Santa Clara.

“The soccer team was cool, the field was amazing, Portland was perfect and the college vibe jibed with what we were looking for,” Megan Rapinoe later wrote.

Sinclair redshirted in 2003 to play in the Women’s World Cup with Canada and Megan Rapinoe redshirted in 2004 to represent the USWNT at the U-19 Women’s World Cup. When Sinclair and Rapinoe finally took the field together in 2005, it was immediately evident something special was brewing. In their very first game, Rapinoe scored twice and Sinclair once in a 3-0 win over No. 14 Stanford.

“About five minutes into the first game, …  you just knew, sitting back there as a center back watching all these amazing players in front of me, that it was something special,” Emily Michaelson, then a sophomore, said in 2015. “That it was something I had never experienced before.”

The Pilots beat all comers early in the season, including non-conference wins over No. 14 Stanford, No. 11 Wisconsin, No. 19 West Virginia, No. 21 Texas and No. 21 Arizona. Portland had a bit of a scare early in conference play when No. 10 Pepperdine held on for a 1-1 draw, but that was as close as anyone got to beating UP in the regular season. The Pilots capped their WCC title with a 3-0 win over Saint Mary’s and it was on to the NCAA tournament.

Sinclair scored five goals in the first two games of the tournament and Rapinoe netted twice in the third- and fourth-round victories to reach the College Cup in College Station, Texas. (Aggieland hosted after leading the country in attendance in 2003 and 2004, but Portland led the nation in attendance every year from 2005-2014).

The semifinals pitted Portland against Penn State in what many viewed as the de facto title game. Indeed, it was the Pilots’ toughest game of the year. Neither side could find a way to score, with UP keeper Cori Alexander called on to make seven saves to keep the Nittany Lions off the scoreboard. Erin McLeod, now Canada’s most-capped goalkeeper of all time, made 10 saves for Penn State, including two on her compatriot Sinclair.

The match finished scoreless through regulation and overtime, technically a second draw on the record books for Portland, and the teams went to a shootout. With the score tied 3-3 with one kick left, coach Smith was glad he had saved his trump card for the fifth and final kick.

“To know that Christine Sinclair is up there with a chance to win and move on to a national championship final was pretty reassuring, it was the right person to have at the right time,” Smith said.

Sinclair sent McLeod the wrong way and Portland was into the final.

UCLA remained the only team in the way of an undefeated season and a second national title. The Bruins crushed Florida State 4-0 in the other semifinal, but the Pilots were quietly confident. At a banquet for the teams before the College Cup, Penn State, UCLA and Florida State players all took photos with the championship trophy, but Portland players knew they’d have their chance after the tournament.

It didn’t take long in the final for the Pilots to show they were the best team in the country.

A mere 90 seconds in, Megan Rapinoe found Angie Woznuk wide open in the box for the opening goal. It was the first goal UCLA had allowed in the entire NCAA tournament, and the rout was on. Sinclair, who went into her final college game on a career-long, three-match scoreless streak, added two more before halftime and Rapinoe finished things off in the 77th minute as Portland won 4-0 to cap one of the best seasons in women’s college soccer history.

“What do you say after a game like that?” Smith said after the match. “The first thought through my head was, ‘Clive, there’s No. 2 for you.’”

The 2005 campaign was a storybook ending to Sinclair’s time at Portland, finishing the year with an astonishing 39 goals, a record that still stands to this day. Only Danielle Fotopoulos, who scored 118 goals at SMU and Florida in the late 1990s, has scored more NCAA goals than Sinclair’s 110.

Sinclair would go on to become the all-time leading goal scorer in international soccer history — men or women — with 186 and counting. While players like Mia Hamm, Marta and Abby Wambach often receive more headlines, it would be hard to argue against Sinclair being the greatest scorer of all time.

Rapinoe went on to play two more full seasons at Portland (she missed most of 2007 with an ACL injury) before graduating in 2008 but never reached the same heights without her running mate Sinclair. She finished the 2005 campaign with 15 goals and 13 assists, including seven match winners. (Even in college, Pinoe was clutch, though Sinc was even more so with 11 game winners.)

Like Sinclair, Rapinoe has had a stellar national-team career, one that’s still being added to with eyes on this summer’s Olympics. Rapinoe won a gold medal at the 2012 Olympics and the 2015 and 2019 Women’s World Cups. She cemented her legendary status in 2019 in France, when she won both the Golden Boot and Golden Ball awards as the Women’s World Cup’s highest scorer and best player, respectively, before winning the 2019 Ballon d’Or, all while battling a U.S. president on Twitter.

But it wasn’t just Sinclair and Rapinoe for the Pilots. Natalie Budge, Lindsey Huie and Angie Woznuk were all hugely important offensively, providing 11, 14 and nine assists, respectively. Alexander was nearly unbeatable between the sticks, allowing just eight goals all season. And it was a group of young people playing for the legacy of their former mentor, Clive Charles.

As stacked as some of Anson Dorrance’s legendary North Carolina teams have been over the decades, there’s an argument to be made that the 2005 Portland Pilots were the best college soccer team ever. They didn’t have the massive history and prestige of the Tar Heels nor the huge athletic budget of a Notre Dame, UCLA or Stanford. But they did have Christine Sinclair and Megan Rapinoe, two players who continue to prove why they’re two of the best to ever play the game.