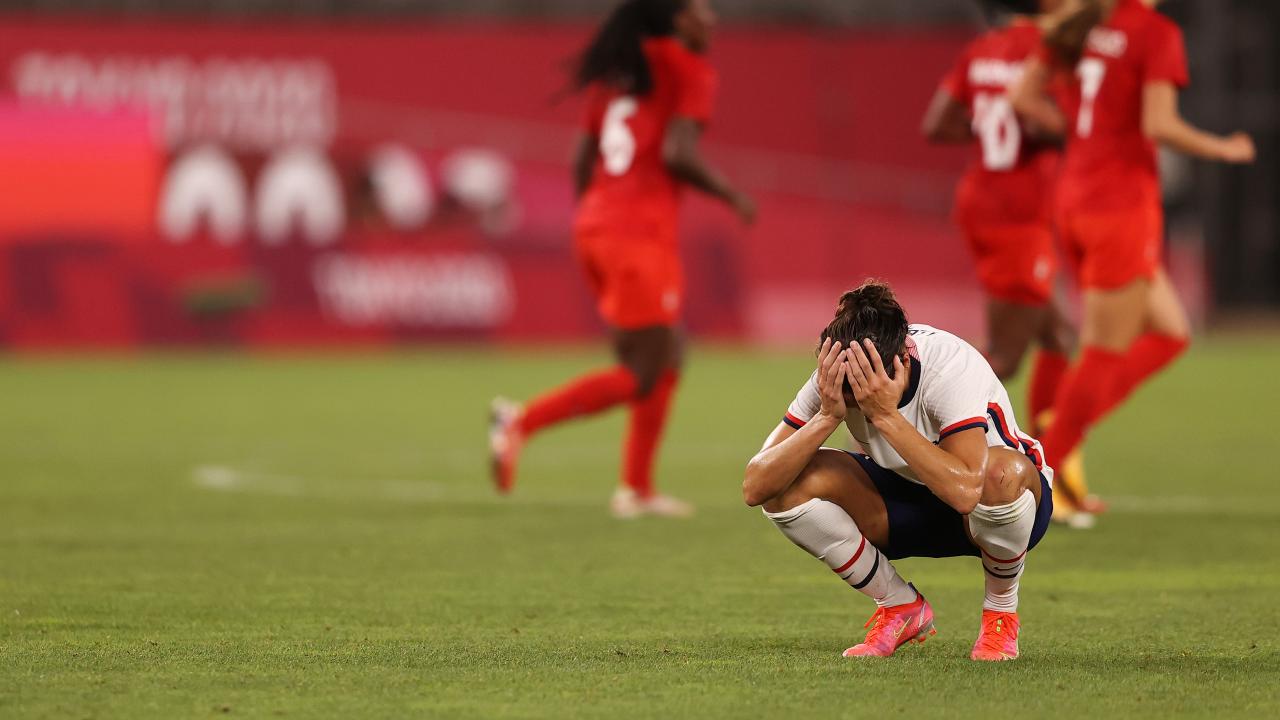 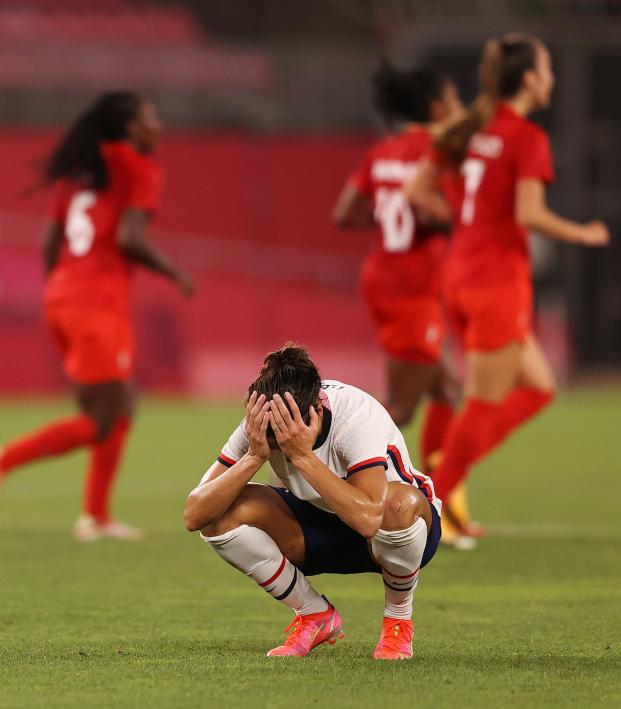 Hindsight Being What It Is, USWNT Roster Selection Was Garbage — Also, We Told You So

Carli Lloyd running sprints alone after defeat may be the lasting image of the USWNT’s 2020 Olympic run, but her questionable inclusion on the team will be a talking point for years to come.

The U.S. lost 1-0 to Canada in the Olympic semifinals on Monday, an ignominious end to the Americans’ meek attempt at becoming the first team to win the Olympics after the World Cup.

In many respects, the Canucks put their southern neighbors out of their misery. The U.S. never found its footing in Japan and probably would’ve been embarrassed by Sweden (again) in the final had it gotten past Canada. While there’s still a bronze medal to play for, it’s not too early to second guess coach Vlatko Andonovski’s roster selection, namely bringing along old folks like Lloyd and Rapinoe.

Ahead of the 2020 Olympics, there was a lot of talk about who Andonovski would take to Japan. The reigning Women’s World Cup champions were getting older, and it seemed like a good time to refresh the squad, especially with the potential to play six matches in 16 days in the stifling Japanese summer.

Andonovski went the opposite route, doubling down on experience by picking a roster with an average age of 30.8. Hindsight being what it is, the USWNT coach made the wrong choices. Also, it wasn’t hard to see coming.

The 2020 Olympics have been an absolute disaster for the U.S. women’s national team, of that there can be no doubt. There’s good evidence this is the worst performance at any major international tournament in team history — including the quarterfinal defeat at the 2016 Olympics.

With one match still to play, the U.S. has already conceded as many goals as it has at any other tournament (seven) and needs to score at least once to avoid finishing with the second-fewest goals scored (currently on eight). The U.S. has been shut out in three of its five matches so far. Three players — Vivianne Miedema, Barbra Banda and Ellen White — have scored as many or more goals than the entire USWNT squad (not including own goals).

The stats are damning, but so too were the performances we watched play out on the pitch. From the opening match against Sweden, the U.S. lacked any sort of offensive fluidity. The midfield was often overrun. The defense uncharacteristically shaky. Only goalkeeper Alyssa Naeher kept the U.S. in the medal hunt at all.

Why was the USWNT so bad? This same squad won the Women’s World Cup in impressive fashion two years ago; what’s changed in that time? Did Andonovski get his tactics wrong or were the players at fault?

The answers to those questions are: age, age and yes.

The U.S. has long dominated women’s soccer in part because of its physical qualities as much as its technical skills. Over these two weeks in Japan, the technical skills were on display, but they were outmatched physically. Julie Ertz was returning from injury, Abby Dahlkemper appeared completely out of form, Alex Morgan couldn’t link up with the midfield, Tobin Heath couldn’t pull off any nutmegs and Christen Press couldn’t stay onside (the whole team couldn’t stay onside).

But the biggest issue was the lack of unity and consistency. With his old roster, Andonovski rotated the lineups constantly — 17 players have at least 90 minutes of playing time — which no doubt hampered chemistry, even if the U.S. has arguably the deepest squad in the world. The result was a disjointed team unable to find its groove offensively and prone to shocking mistakes defensively.

Who do you blame here? Vlatko Andonovski for his roster and lineup decisions? The players for not playing like they did in 2019? Or perhaps both?

Personally, I lean toward blaming Andonovski, though there’s plenty of blame to go around.

It would be just about impossible to criticize the efforts of the older USWNT players. Players like Lloyd and Rapinoe left it all on the pitch and did their absolute best. Lloyd had the USWNT’s best chances to score against Canada, even if she was generally ineffective throughout the tournament. Rapinoe similarly provided an occasional spark but was never able to produce any end product.

The problem was: their best efforts weren’t good enough, and perhaps Andonovski should have brought younger, more energetic players to Tokyo. Neither Lloyd, 39, nor Rapinoe, 36, tallied an assist or a goal.

You know Lloyd was lobbying hard to be included on the Olympic roster — she put off retirement and starting a family just for these Games. You know there was pressure for Andonovski to include Rapinoe, the face of the team and the hero of the 2019 Women’s World Cup.

But it seems pretty clear the U.S. coach should’ve trusted his youth instead of sticking with the old guard.

“I feel like we haven’t had our joy a little bit,” Rapinoe said after the match. “It hasn’t flowed for us. It hasn’t been easy. We tried to find it. It’s not for lack of effort. It just didn’t click for us. I don’t know if it’s roster rotation but our roster’s deep as hell. We just didn’t have that juice that we normally do.”

Megan Rapinoe got choked up when asked about a moment she & Carli Lloyd shared after the loss to Canada in (likely) their last Olympics. Meanwhile Carli is running suicides in the background the entire interview. @CarliLloyd is a warrior & an inspiration. #USWNT #Tokyo2020 #USA pic.twitter.com/c2B9hPIfso

At the risk of Lloyd coming after me like she did another reporter just doing his job, Lloyd was the single biggest mistake on this USWNT Olympic roster.

Lloyd’s inclusion simply wasn’t warranted based on her recent form (she hasn’t done anything in the NWSL this year), and she didn’t turn it on once she got to Tokyo. Even allowing that Lloyd was just a role player coming off the bench, you feel Andonovski would have been much better off had he included younger players who are either in their prime or will be at the 2023 Women’s World Cup.

It may be true that Lloyd is the hardest worker on the team, but if hard work was all it took, the USMNT would have won a men’s World Cup decades ago. And yes, I just compared Carli Lloyd to a USMNT player, and yes, that’s probably an insult. I don’t care if Lloyd is an inspiration to many; she inspired me to fall back asleep after waking up at 2:30 a.m. time after time to watch her fail to score.

“Life has knocked me down a few times. It showed me things I never wanted to see. I experienced sadness and failures. But one thing for sure, I always get up.” #stillnotdone #Tokyo2020 pic.twitter.com/B1f7f5PZWB

Rapinoe, a few years younger, was a more understandable inclusion. She’s done goals in NWSL this season and both created and scored more than Lloyd in the buildup to the Olympics. But she too failed to really make an impact in Japan.

You could make similar arguments about the inclusions of Sauerbrunn (36) and Tobin Heath (33), the latter of whom was coming off a long injury layoff. Even 32-year-olds Christen Press, Kelley O’Hara and Alex Morgan seemed to lack a step this summer.

Andonovski could have — perhaps should have — gone the opposite direction with his roster selection. Knowing the next Women’s World Cup is just two years away, he could have started looking to the future instead of relying on the past.

Half of Andonovski’s 22-player roster is at least 30 years old. Of the 21 players who have seen the field in the Olympics, just two are under the age of 26: Tierna Davidson and Catarina Macario. It’s clear Andonovski was coaching for the now, but in doing so he forgot about the future, which could cost him a chance of being involved come 2023.

The most baffling decision of all to me is the fact Andonovski took Macario, 21, to Japan but has only played her for seven minutes. Macario, who only became naturalized as a U.S. citizen in the last year, looks like the future of U.S. soccer. She plays a similar position to Lloyd (CAM, CF, ST or even winger) but is nearly half Lloyd’s age. Unless there was an unreported injury, I can’t fathom why Macario wasn’t given more of an opportunity, especially with Morgan and Lloyd struggling.

The USWNT’s best offensive spark of the tournament was one of its youngest players, relatively speaking. Lynn Williams, 28, had a goal and an assist in a surprise start in the quarterfinal against the Netherlands. Though one of the few youngsters on the team — 22-year-old Tierna Davidson — committed the foul that led to Canada’s winning PK, Davidson was otherwise solid, far more consistent than Dahlkemper, who she replaced in the lineup after a menagerie of mistakes. Imagine what a kind of spark a 21-year-old could have provided to that old squad.

Of course, this is all easy to say in hindsight. You could just as easily argue the older players are proven winners and deserved the right to be there. But it’s not like these issues weren’t well known before the tournament (I alluded to the need for younger players before the Olympics). Given the format and short turnarounds, the Olympics require a different formula to win. The last time the U.S. won gold, in 2012, there were just four players over the age of 30 on the roster, half what the USWNT brought to Tokyo.

And it’s not like there weren’t other good options. Sophia Smith looks like the real deal in Portland, Alana Cook has been great in France, Jaelin Howell has shown she can get the job done in midfield, Mia Fishel deserves a chance to bag some goals. Mal Pugh has turned her career around with a stellar start to the 2021 season and Trinity Rodman has been arguably the most exciting player in the NWSL this year. Even Sydney Leroux, still just 31, is back banging in goals with Orlando after giving birth to a second child, leading the NWSL with six goals so far.

Andonovski still has one more game to coach at these Olympics, but he may have cost himself a chance of still being around at the 2023 Women’s World Cup. If he’s still around in the coming years (a big if), he’ll have to completely overhaul his roster selections. Whether she wants to admit it yet or not, Lloyd’s international career is over. Rapinoe and Sauerbrunn will be 38 by the next Women’s World Cup, so they’re probably done too.

If there’s one upside to the U.S. playing like absolute garbage in Japan, it’s that the coach, whoever they might be, will have to take a hard look at the roster. Hopefully the USWNT doesn’t make the same mistakes when it’s time to announce the squad to head to Australia/New Zealand in two years. Hopefully Lloyd isn’t on the plane.