The Bayern Munich starting XI 2022-23 lineup is going to be an incredibly difficult decision for manager Julian Nagelsmann. The departure of Robert Lewandowski has left a hole the size of Bavaria in Bayern’s attack. Without a solid replacement at center forward, what will Nagelsmann do?

Nagelsmann loves himself a 4-2-3-1 formation and it’s hard to see him stepping away from it. For this example, that formation will be used. Here’s an idea of how the defending Bundesliga champions could lineup. 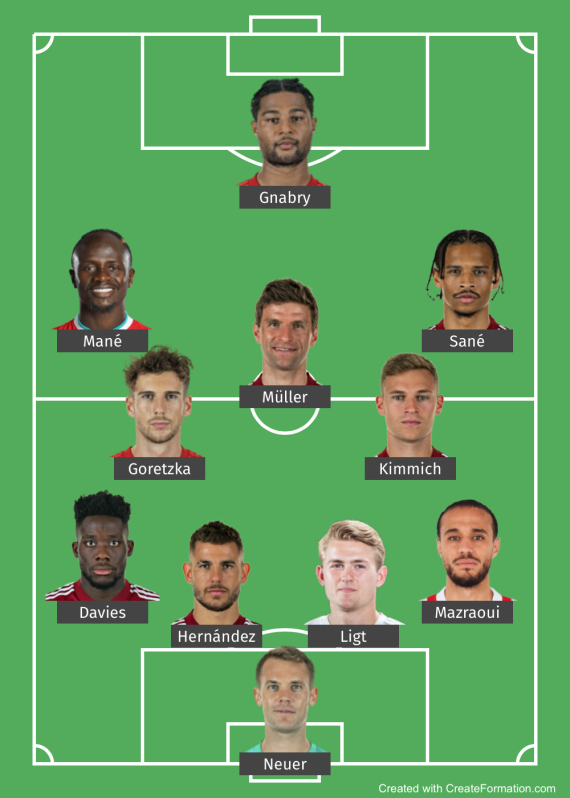 We’ll start from the top of the formation and work our way to the bottom. Lewandowski jumping ship to Barcelona was a massive blow to the formation. Bayern has a ludicrous number of talented wingers, but who can fill the top spot?

Serge Gnabry has played center forward eight times in his career and also filled in as a second striker 21 times. Out of all the wingers he has more experience playing in the middle if no replacement were to come in.

Bayern is close to signing phenom striker Mathys Tel from Rennes. The kid is only 17 however so it’s unrealistic to start the youngster next season.

It’s possible to see a rotation of wingers try out the center forward spot. Who knows, massive signing Sadio Mané could get a stab at it too as he’s lethal in front of goal.

The four wingers (Mané, Leroy Sané, Gnabry and Kingsley Coman) will have to work together to fill the Lewandowski goalscoring void. If none of the wingers fill the center forward role then it could be Eric Maxim Choupo-Moting’s time to shine.

The ageless Thomas Müller keeps his spot at second striker and will also need to be netting extra goals. Waiting in the wings behind Müller is the teenager, Jamal Musiala.

The midfield is rock solid and sees no changes. Leon Goretzka and Joshua Kimmich will be expected to assert their dominance in the midfield, but they could find some competition for the starting job with $20 million Ajax signing Ryan Gravenberch.

So much focus is on Bayern’s new attack that the new arrivals in defense are sometimes overlooked. The biggest addition is the reported $73.7 million signing of Matthijs de Ligt from Juventus.

Matthijs de Ligt to FC Bayern, here we go! Verbal agreement has been reached tonight as clubs have been in contact all day - final bid accepted by Juventus for package worth more than €80m #FCBayern

He’s surely a lock for a starting center back job. Dayot Upamecano and Lucas Hernandez will battle for the other center back spot.

The right back position is also interesting as usual starter Benjamin Pavard could see his job taken by another Ajax arrival. Noussair Mazraoui arrived on a free transfer and could lineup with his old Ajax teammate De Ligt.

There are so many variations that Bayern could go with, therefore it feels necessary to add a second potential starting XI. Playing with this team’s starting XI is like tinker toys in the way you can build so many different looks. 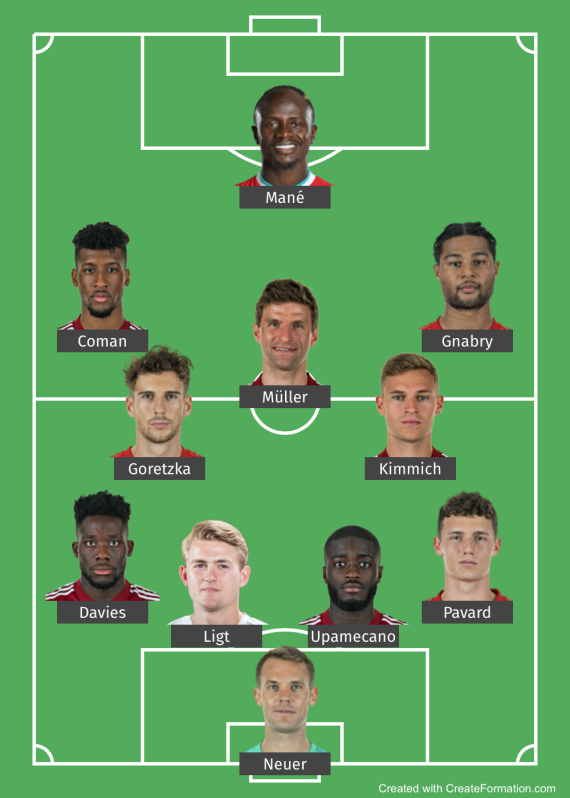