Openly Homophobic Jaelene Daniels Is Back; NWSL Fans Are Furious 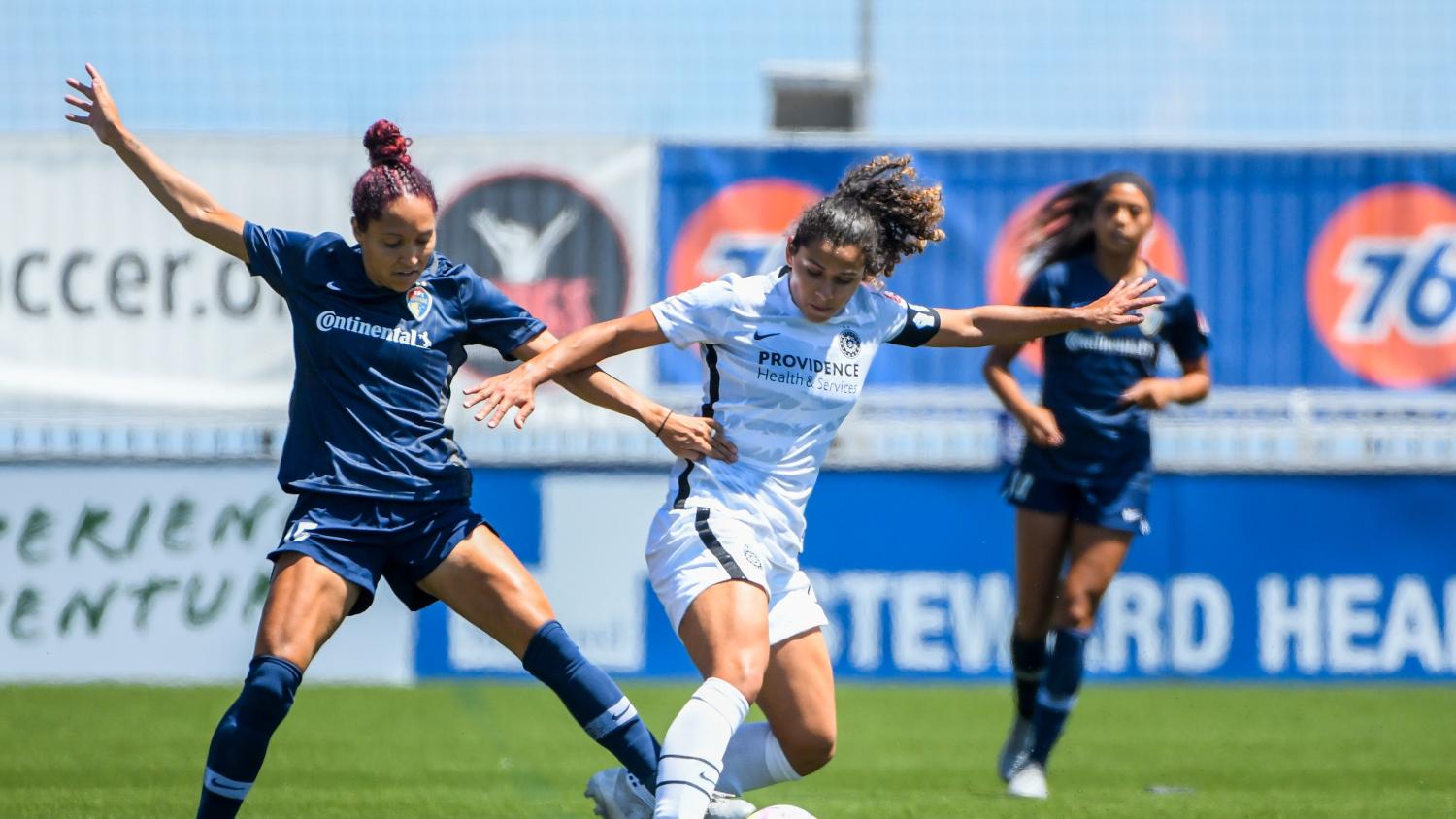 Two of the NWSL’s most troubled clubs have made two more troubling moves.
Getty Images

On Sunday afternoon, the N.C. Courage announced they had signed a one-year deal with retired fullback Jaelene Daniels, formerly known as Jaelene Hinkle. Now NWSL fans across the country — especially in North Carolina — are furious over the signing. On the other side of the continent, the Portland Thorns angered their fans for drafting a player with a history of horribly racist, homophobic and transphobic behavior on Twitter.

This is not how the NWSL wanted to end what has already been a shit year for the league.

Jaelene Daniels retired from soccer in 2020 and gave birth to her first child in August. The three-time NWSL champion has eight caps with the USWNT but has been mostly shunned from the team since refusing a call-up in 2017 for “personal reasons.” In 2018, she revealed she turned down the chance to represent her country because she refused to don the rainbow colors the team was wearing to promote Pride Month; in 2015 she tweeted “This world is falling farther and farther away from God” in response to same-sex marriage expanding to all 50 states in the U.S.

Now, Daniels is back in the NWSL.

This league is falling farther and farther away from god https://t.co/Qi0G5tpIsZ

It didn’t take long for NWSL fans, who are predominantly supportive of LGBTQ+ rights, to take note of the Daniels deal, which is for one year with an option for a second. Regardless of her abilities as a footballer, the fact she is so openly homophobic in a league like the NWSL has unsurprisingly pissed off fans across the country.

Many fans have stated they have or are thinking about canceling their season tickets, and it’s hard to blame them given what the club has put fans through this year, especially after all of the allegations against former coach Paul Riley.

To live in a state where the lieutenant governor calls queer people "filth" and club management still thinks that platforming an avowed homophobe won't have consequences...

Same! My decision is on the fence as well.

Maybe we shouldn’t be surprised about these actions in North Carolina, a state that has long allowed or even encouraged LGBTQ+ discrimination. In Portland, you might expect better, but alas it appears there is not much vetting going on before the NWSL draft.

On Saturday, the Thorns used their first pick in the NWSL draft (the first of the second round, 13th overall), to pick Sydny Nasello, a forward out of South Florida. It didn’t take long for Thorns fans to find some disturbing transphobic, homophobic and racist retweets and likes on Nasello’s Twitter account.

Hey, @ThornsFC I'm sure you did a check on the new forward to make sure she she's a good fit for the team, right? pic.twitter.com/cQGmLvcZrq

just some SS I have of syd*y likes.. there's a lot more but it's pretty self-explanatory. pic.twitter.com/JL7rjw3o7d

So women's health is not her thing? This is so gross. And making fun of a homeless crisis.....also very gross. pic.twitter.com/3oi9VFabk5

This is alt right 8chan r/pol shit. She’s genuinely a fucking fascist. Never expected to say this about a player in the NWSL but it’s way worse than Hinkle pic.twitter.com/Did9XhLbGS

Portland fans were quick to call out the club.

Fascism, racism, homophobia, transphobia- we are against these. We don’t support anyone who represents/espouses these views, full stop.

Nasello tweeted an apology for her comments on Saturday, but she has since protected her tweets so only approved followers can see her account. Based on the responses the apology has received, it doesn’t appear to have gone over well, which may be why she hid her account.

there wasn’t even an apology in here LMAO

or any recognition of what wrong doing was done

Where’s the apology for the transphobia and racism?

How is this at all an apology

For such a public-facing organization as the Portland Thorns, it is shocking to me the club didn’t do its homework before drafting a player with such a questionable background, one so antithetical to the majority of those who play for and watch the team.

Sadly, we shouldn’t be at all surprised about any of this from the NWSL, because we’ve been shown time and time again this is what the league is, despite its fans and players repeatedly demanding more.

To say it’s been a tumultuous year in the NWSL would be a massive understatement. Pretty much every team in the league has had some sort of scandal, some of the worst offenders being the N.C. Courage and Portland Thorns who made these recent questionable moves.

So yeah, maybe signing an openly homophobic player and drafting a transphobic fascist are exactly what the NWSL is all about.

So two #NWSL teams involved in the systemic abuse of players decided to add known bigots to their squads?

Y’all, this league doesn’t care about the players or fans. They’ve made that abundantly clear.

Remember, when someone shows you who they are, believe them the first time.

Thinking again about the role that homophobia played in the Paul Riley allegations as the NWSL deals with outrage over the signing/drafting of two players that expressed homophobic/transphobic views. The two teams involved, of course, are the two teams that employed Riley.

Despite repeated claims from the NWSL and its clubs that they’re an inclusive league, we’ve repeatedly been shown otherwise. And fans are growing sick of it.

None of this is to say Daniels and Nasello should not be allowed to hold these views. This is the United States, where freedom of speech is protected. But fans are equally within their rights to boycott clubs who ignore what they want the league to stand for. In a league that is struggling to pay its players a living wage, it makes little sense to eschew values in favor of a slightly better chance at winning.

Maybe the only NWSL team that doesn’t have any controversy on its hands (other than Angel City, which has yet to play a game), is the Houston Dash, a team so fucking boring I feel obligated as a Houstonian to point out that fact every time I write about the NWSL — as far as I can tell, the club doesn’t even have a general manager or sporting director on staff.

This is a problem that isn’t going away anytime soon for one major reason. Despite the league and clubs saying they promote diversity and inclusion, they don’t practice what they preach.

Just look at the San Diego Wave FC, who recently unveiled their amazing new logo by saying the colors represent the diversity of the city. It’s a lovely sentiment, but then the drafts rolled around and the team’s front office did not reflect that diversity one bit.

NWSL clubs are still predominantly owned and run by a group of people with less diversity than a James Taylor concert. It’s why we keep seeing white men hired as NWSL coaches, including recent hires Scott Parkinson at Gotham, Kim Björkegren in Louisville and now Kris Ward with the Spirit, even after all the abusive white men that were fired this year.

The 2022 NWSL season will kick off on March 19 with the third annual Challenge Cup. Regular-season play will begin shortly after the May 7 Challenge Cup Final and end with the NWSL Championship the final week of October.

After all the awful news coming from the NWSL in 2021, bringing in two players who do not share the values of the league’s fans are, sadly, the most appropriate way to end the year.

We can only hope it gets better in 2022. I’m not holding my breath.