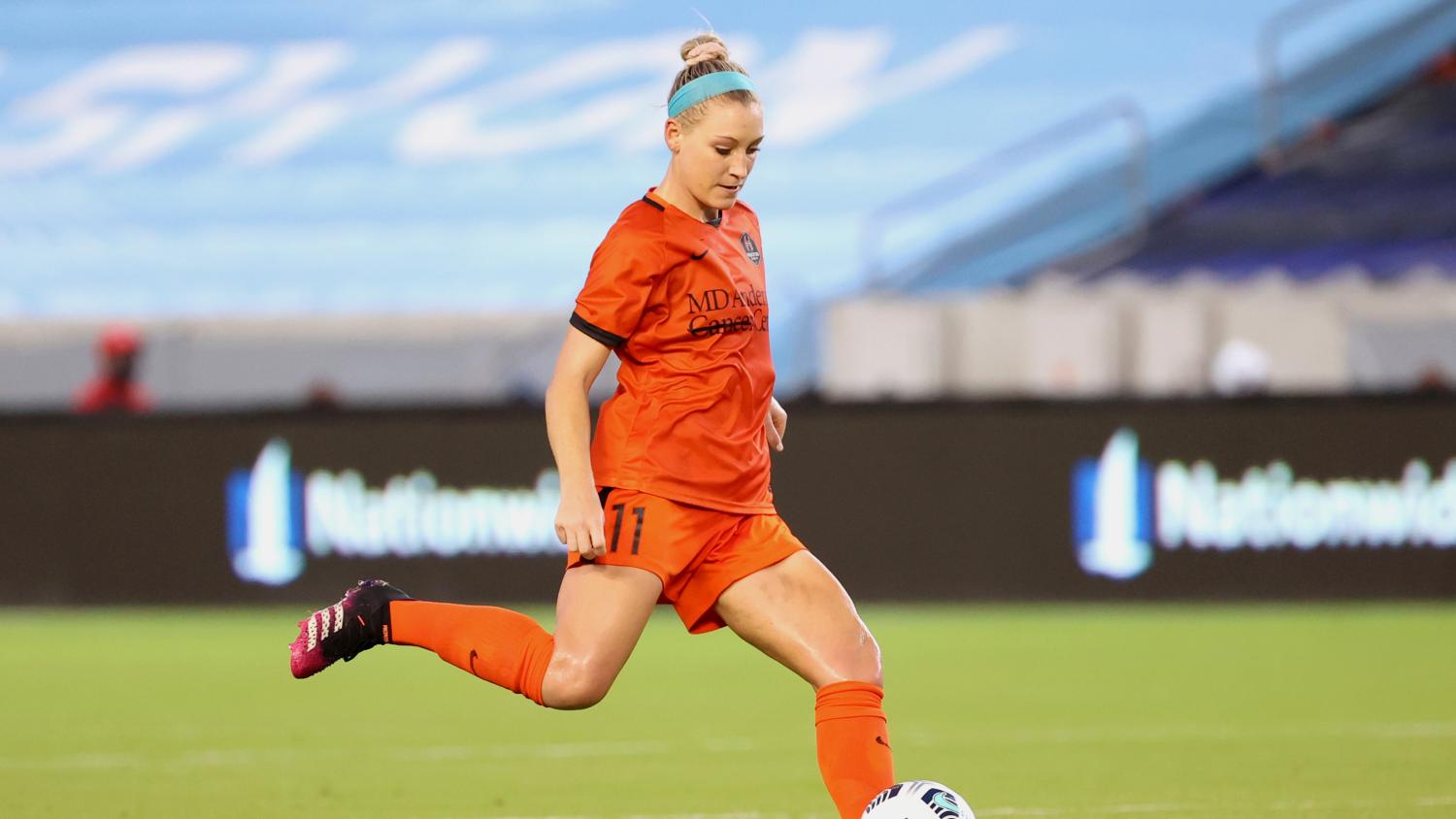 With extremely low minimum salaries, many NWSL players have to take second, third or even fourth jobs to make ends meet.
Getty Images

Cleaning toilets, mopping floors, 10-hour days packing Amazon boxes, working at least two side jobs, living with parents. These are the lengths many NWSL players have gone through just to be “professional” athletes. The NWSLPA hopes to ensure a living wage for all NWSL players with its new No More Side Hustles campaign launched this week.

According to the NWSL Players Association, one third of its members make the league’s minimum salary of $22,000; 75 percent make $31,000 or less. To make ends meet with salaries closer to the poverty line than a comfortable wage, a huge portion of the league’s players must take second, third or even fourth jobs. The NWSLPA is highlighting the struggles NWSL players must go through just to afford to be a professional footballer in an effort to bring about better pay for the players we love to watch every week.

Professional athletes, regardless of gender, shouldn't have to work 2, 3, and 4 jobs to support themselves.

The NWSLPA is proud to announce the launch of https://t.co/l6VTKJg7r2! Join us in taking action in the fight for #EqualPay, #FairPay & #NoMoreSideHustles pic.twitter.com/UWjVelV7JJ

In its ninth season (if you count 2020), the NWSL is thriving more than ever. With Angel City FC and San Diego joining the league in 2022, the league is on an upward trajectory, especially after signing a TV/streaming deal with CBS and Paramount+ last year.

Salaries are still lagging behind other professional leagues for a majority of the players. USWNT and Canada national team players have their salaries paid for by their respective national federations, but beyond that most players barely make enough to get by.

“NWSLPA will not wait another decade to achieve fair contracts, equal pay, professional playing conditions,” the association said on the NoMoreSideHustles website. “Our goal is to set the global standard and ensure that a career in NWSL becomes a viable professional career choice in the years ahead.”

The #NoMoreSideHustles campaign is simultaneously brilliant and heartbreaking. Some of the best footballers in the world have recounted tales of working multiple extra jobs, many of them inglorious, in an effort to make their paltry NWSL salaries work.

Jessica McDonald, a World Cup winner, worked at Amazon packing boxes for 10 hours a day before training young girls in the evening and finally training herself afterward — all while raising a young son. Darien Jenkins cleaned toilets and mopped floors, trained by herself or with a boys team at night and refereed in between to afford gas money. Kat Williamson cleaned homes and worked as a receptionist; Bella Bixby had to live with family; Gabrielle Seiler woke up before 4 a.m. and worked a full shift before going to training.

These are the stories that point out the struggles of the average NWSL player. Can you imagine Christian Pulisic working a second job as a Lyft driver or coaching a youth team in the offseason?

On some level, most devoted NWSL fans already knew this was happening. MLS had similar issues in its early days (the first MLS player I ever met was still living with his parents). But seeing these vignettes just puts into focus how far the NWSL still has to go.

Here is a sampling of the stories players shared with the #NoMoreSideHustles campaign. I’m sure many will read these and say that’s fair capitalism, but that misses the point. No one should have to work three jobs to make ends meet, especially a professional footballer in a world where many athletes are given extravagant salaries.

I once worked at Amazon packing boxes during 10 hour days on my feet. Head to train younger girls in the evening. Train afterwards myself. All of this while raising my son. #TheStruggleIsNotfake https://t.co/iddWNQkLxj

So many people, athletes and non-athletes have come forward to share their side hustle stories. Thank you for stepping forward! #NoMoreSideHustleshttps://t.co/vw0kJgFU7Z pic.twitter.com/QTWF1pHwWU

All 8 years I’ve played in the NWSL, I’ve worked at least 2 additional jobs during season. I’m eternally grateful for those employers who understood and worked with my schedule, but I’ll fight like crazy so the players who come next can just play soccer. #NoMoreSideHustles

Performing at 100% should be the only focus for professional athletes. #NoMoreSideHustles

Since my rookie year, I’ve coached on the side to supplement my salary. Sometimes concurrently working private sessions, club trainings and high school trainings. I had to live at my parents for a year while playing and doing all these side hustles. #NoMoreSideHustles

It’s not easy balancing being a pro athlete and taking up multiple side jobs to make a livable wage. I cleaned homes for extra money and worked at a dental office as a receptionist. Demand and interest is there in the Women’s game and players deserve fair pay. #NoMoreSideHustles https://t.co/0F595EmAYb

I worked so much that NWSL was the side hustle. Love this initiative! #FairPay #EqualPay https://t.co/ENfUR6bwrM

Worked at @orangetheory my rookie year and luckily I always saw the positives. I met the most amazing people, BUT waking up at 3:30 am just to try and make extra money to live, while trying to be a professional and go to practice after. It’s not okay. #NoMoreSideHustles https://t.co/etkPtayCc7

As much as I loved ALLLL the work experiences I had while I was playing, it would have improved my mental and physical health to focus solely on playing. This is much much needed. Good stuff @nwsl_players ! https://t.co/oXDB156A4M