How To Stop Lionel Messi? Man In Jeans Has The Answer During Le Classique

Connor Fleming October 24, 2021
This was really unsporting but really funny.

With El Clásico, Reds-Red Devils, the Derby d'Italia and Le Classique all falling on Sunday, American viewers were presented with a smörgåsbord of hatred and fury from across Europe.

Marseille’s standing as an epicenter of football culture and fandom has long been under-appreciated by the English-speaking world, but there’s no denying that — for better or worse — the Vélodrome had the best atmosphere of all the aforementioned games.

In Barcelona, 86,422 made their collective way inside the Camp Nou, but David Alaba’s epic opener largely silenced Culés for the better part of the match. In Manchester, the 75,000 in attendance at Old Trafford left at halftime. But the 67,000 at the Vélodrome were on their feet the whole time, willing their side both metaphorically and literally throughout the 90 minutes.

The literal part came in the 73rd minute, when PSG — already down to 10-men following a red card to Achraf Hakimi in the 57th — found itself on the counter with the ball at Lionel Messi’s feet. Play was stopped with Messi cutting inside and shaping to shoot because Real. Comfortable. Jeans. got on the field of play.

Well, that was different...

A supporter runs on the pitch as Messi & 10-man PSG are on the counter-attack, once again interrupting play.#beINLigue1 #LeClassique #OMPSG pic.twitter.com/wNH6lgz7rU

Marseille also used riot shields to defend PSG players while taking corner kicks (nothing unusual for fans of CONCACAF), but I don’t think I’ve ever seen this before: a mobile net as the first line of defense before the riot shields. 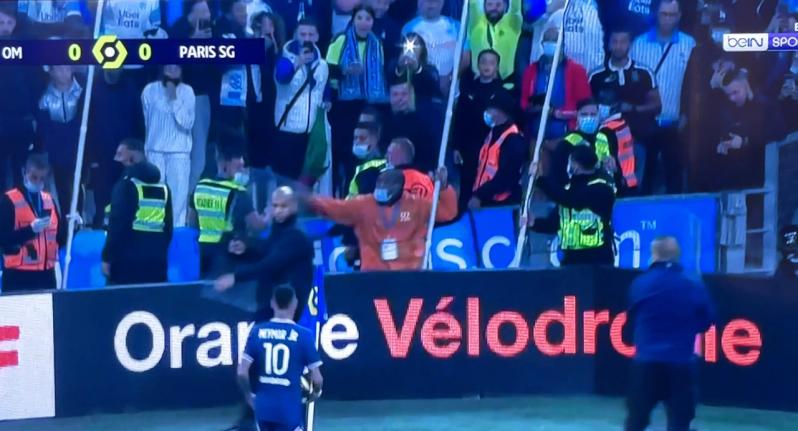 Marseille's mobile net gets itself in place for Neymar's corner kick.

Here are some of the more sporting moments from the Vélodrome crowd.

Atmosphere heating up outside the Vélodrome ahead of Marseille vs PSG. pic.twitter.com/ZxCKh6BH5S

Marseille supporters haven't messed around with their tifo!

You can feel the passion inside the Stade Vélodrome. pic.twitter.com/X4NFBeOoGh

The noise 30 minutes before PSG's Ligue 1 match against Marseille pic.twitter.com/apPk6LlGiG

The match would end 0-0, so PSG’s lead at the top of Ligue 1 is still seven points after 11 games despite the fact that Messi has yet to score or assist in league play.