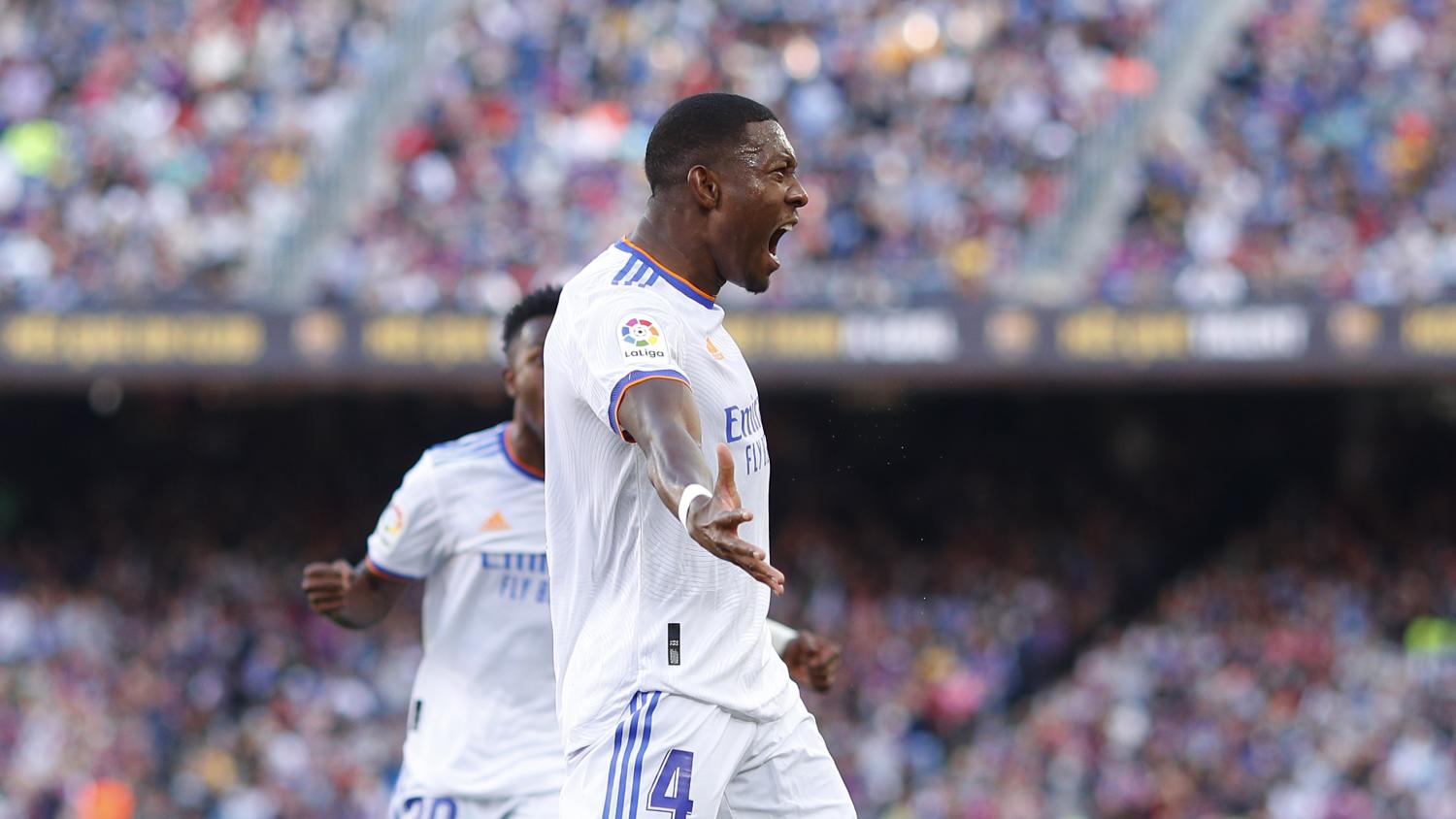 Real Madrid piled the pressure on Barcelona with a 2-1 LaLiga victory at Camp Nou on Sunday that was highlighted by David Alaba’s masterclass in turning defense into attack in the 32nd minute.

Historically speaking, it’s a really damning loss for Barcelona. That’s four straight wins for Real in this fixture, a run of fortune that Los Blancos haven’t experienced since 1965. It’s also only the second time ever that Real has won back-to-back games at Camp Nou.

So is this the end for Ronald Koeman? We’re a quarter of the way through the season and Barça is eighth, but the performance today wasn’t all doom and gloom. Barcelona imposed its style and created chances with movement and passing around Real’s area, whereas Carlo Ancelotti’s men hit on the break out of a low block.

It’s a stylistic battle that we’ve seen before in this fixture, although Sunday certainly represented the “lite” version of the respective approaches without prime versions of Ronaldo, Bale, Messi and Iniesta to enact them.

The coverage on ESPN, however, saw El Clásico literally step out of the dark and into the light. Previously, the beIN SPORTS broadcast was Phil Schoen and Ray Hudson locked in a dark room in Florida. Now we had Dan Thomas and Ale Moreno stationed outside the Camp Nou, Ian Darke and Steve McManaman casting an eye over proceedings from their place in the stands and Luis García and Alexis Nunes soaking in the atmosphere pitch-side.

The Camp Nou was energized. Despite stadium restrictions being largely lifted, the 99,000-seat stadium was only half-full for previous fixtures against Valencia and Dynamo Kyiv. On Sunday, players entered to a rousing version of “Cant del Barça” and a full-stadium tifo.

There weren’t really any surprises in the starting lineups of either side, and Barcelona kept Real Madrid pinned back early with the left-flank of Jordi Alba and Memphis Depay targeting Lucas Vázquez.

Barça should’ve had the opener on 25 minutes when Depay charged into the area before sliding a ball across to Ansu Fati. The 18-year-old took a touch to shift it through to Sergiño Dest. Now operating as a right winger for his club, the 20-year-old American reverted to his right back ways when searching for the finish.

From 10 yards out and with the goal at his mercy, Dest comically scooped his effort over the bar.

Real’s threat was on the opposite side of the pitch, where Vinícius Júnior was asking questions of Óscar Mingueza on the counterattack. In the 32nd-minute, it was a Real counter that earned the visitors the breakthrough, but it was outstanding play from the center back Alaba that proved instrumental.

The seven-time Austrian Footballer of the Year won possession on the edge of his own area, passed to Viní Jr and took off on an adventure up the pitch. Viní Jr changed the point of attack by switching it to Rodrygo, but the 20-year-old Brazilian sent Barça’s defense on a merry dance by switching it back to Alaba.

The defender’s first goal for Real was a screamer that gave Marc-André ter Stegen no chance.

Right before half, Alaba again demonstrated his value with a close-range block on Fati after some incisive Barcelona build-up play. Koeman made the game’s first change at halftime by bringing on Philippe Coutinho for Mingueza and moving Dest back into defense, but Los Blancos almost had a second on the hour after Luka Modrić teed up Karim Benzema for a volley that the Frenchman struck straight at Ter Stegen.

Dest then tried to recreate his USMNT rocket against Costa Rica, but he again fired over. Sergio Agüero entered the fray looking for his first Barça goal in his first Clásico — you gotta fight fire with fire — but the Argentine could only send an 84th-minute header over the bar.

Barcelona’s search for an equalizer led to a couple frantic moments in Real’s area, but all the pressure eventually led to another Real counter that ended with Lucas Vázquez poking home a rebound for the two-goal lead at 90+3'.

There was still time for Barça to pull one back with effectively the last kick of the match. Dest got the assist and Agüero got the goal.

The three points takes Real to the top of the table on 20 points from nine matches. Barcelona is five points back. Real hosts fourth-place Osasuna on Wednesday. Barcelona travels to sixth-place Rayo Vallecano that same day.