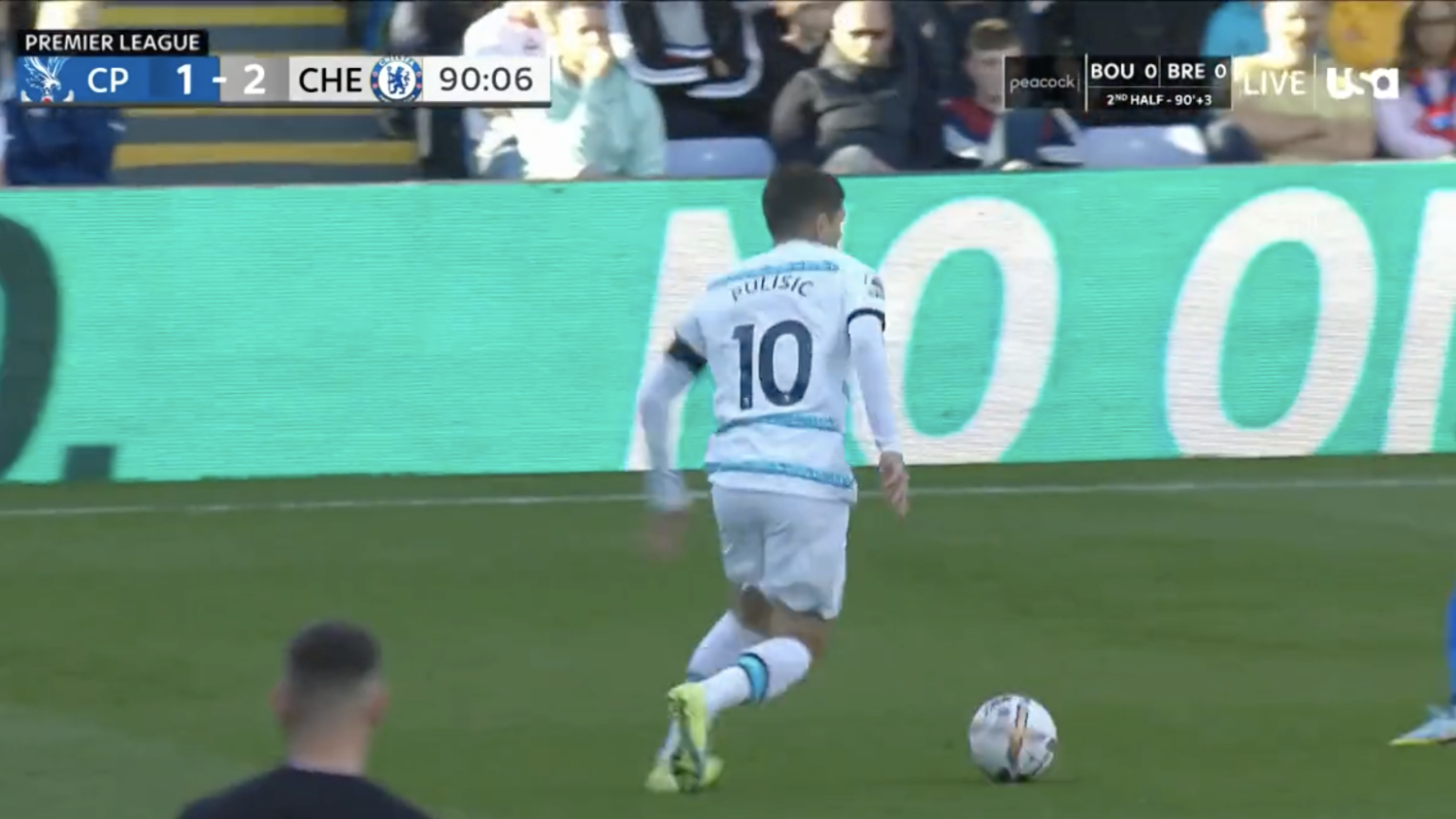 Christian Pulisic made a great impression on new Chelsea manager Graham Potter after assisting the game-winning goal of the Blues’ 2-1 victory vs. Crystal Palace on Saturday. The game was Potter’s first Premier League game in charge for Chelsea.

Pulisic sat on the bench for 84 minutes of the match and was brought on late in the game with the score tied 1-1. He only needed six minutes to make an impact as he assisted fellow substitute Conor Gallagher for the 90th minute game-winner.

Pulisic gets the ball to Conor Gallagher and Gallagher does the rest.

Also, for the record this is the most American article of all time. Gallagher scores a screamer but the only thing we’re talking about is the Pulisic assist. What else would you expect from the media company that calls the sport soccer?

It was an incredible strike by Gallagher and one that must have been bittersweet for him. The 22-year-old was the player of the season for Crystal Palace last year while on loan from Chelsea. He received a standing ovation from Selhurst Park when he was brought on in the 76th minute.

Gallagher didn’t celebrate his goal out of respect for his former club.

Saturday’s game wasn’t without controversy. Thiago Silva might consider himself lucky he didn’t get sent off in the first half. Silva was the last defender back for Chelsea and had fallen to the ground and then in a moment of desperation he slapped the ball away from Palace’s Jordan Ayew.

VAR determined Silva didn’t deny a clear goal scoring opportunity and was only given a yellow card.

Thiago Silva fallen and he can’t get up pic.twitter.com/JIUqK5Y5fL

Should Thiago Silva have gotten a red card?

It was then Silva who assisted Pierre-Emerick Aubameyang to tie the game at 1-1. Palace fans will argue that the Brazilian defender shouldn’t have been on the field to provide that assist.

Palace had taken an early lead through Odsonne Édouard just eight minutes into the game.

The Graham Potter era is off to a shaky start. #CPFC
: @USA_Network #MyPLMorning | #CRYCHE pic.twitter.com/K1wCn4BBYv

What Does Today’s Game Mean For Pulisic?

The American wasn’t given much time to impress, however he made the most of his brief appearance and got his first goal contribution of the season.

Pulisic’s relationship with former manager Thomas Tuchel was rocky at best and it looked as if the bad blood between the two meant minimal minutes for the American this season. Potter has gone on record to say he’s willing to give Pulisic a chance.

Graham Potter on Pulisic: “He has been really positive. He’s a smart guy. My conversation with him has been good, positive”. #CFC

“I'm not going to judge anybody on what's happened in the past. I make my own mind up. Football hopefully decides”. pic.twitter.com/5NaxdhohhP

There are rumors swirling that Chelsea could land RB Leipzig ace Christopher Nkunku in the winter transfer window. The addition of Nkunku could see Pulisic leave the club, but who knows, maybe the assist today is the beginning of a Chelsea rebirth for the American.

What is for certain is that Gallagher is my favorite English player at the moment for boosting Pulisic’s stats.