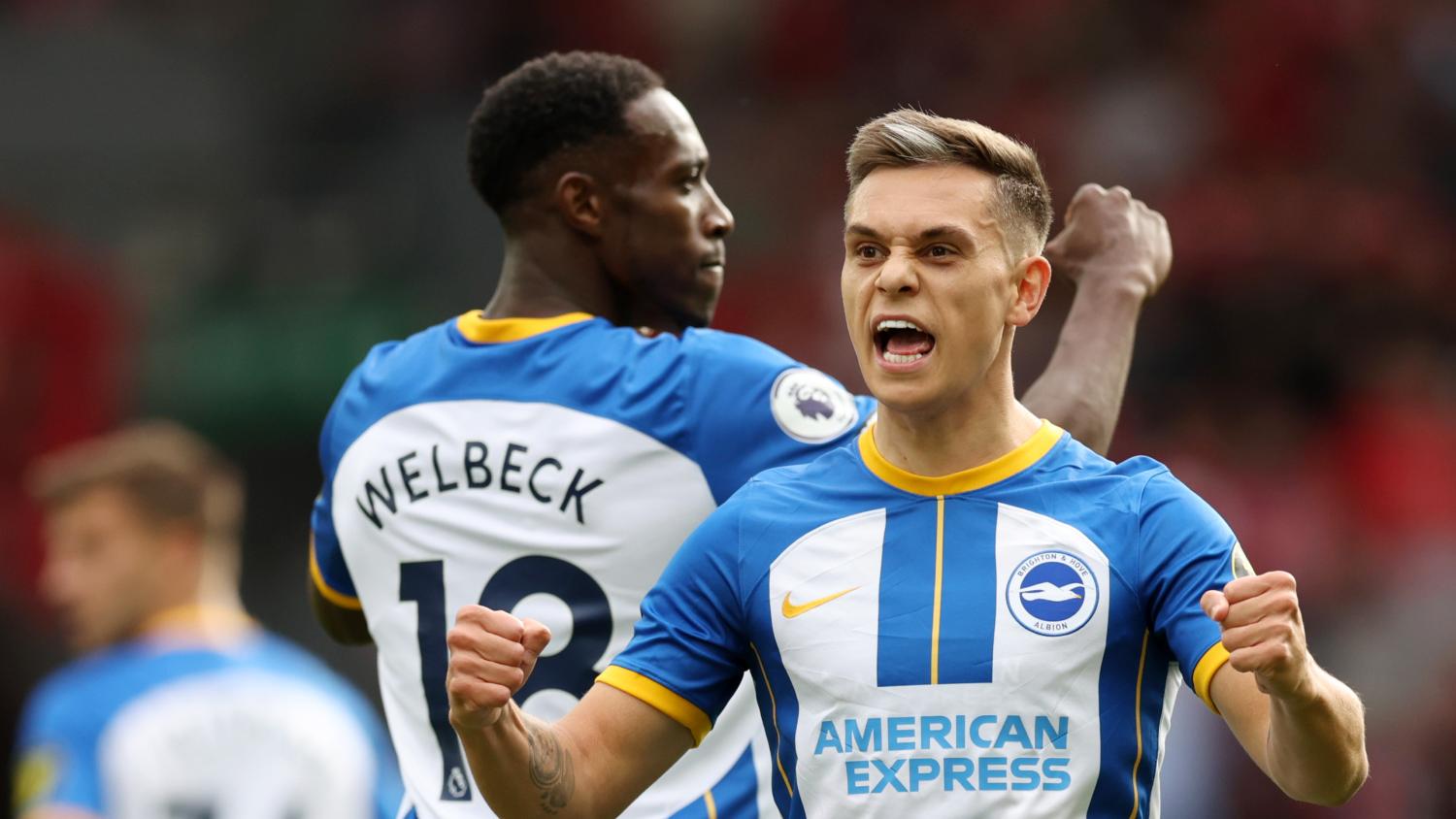 Trossard is only the third opposing player in history to score a hat trick at Anfield.
Getty Images

Brighton coach Roberto De Zerbi's first game in charge could not have got off to a better start as two well-taken goals from Trossard gave the visitors a 2-0 lead by the 17 minute mark at a stunned Anfield.

Trossard has a brace and stuns the Anfield crowd! #BHAFC

Home supporters grew more frustrated as the hosts struggled to create openings, before Roberto Firmino's goal, which was initially ruled out for offside against Mohamed Salah only to be overturned by VAR, gave his side a 33rd-minute lifeline.

Firmino pulls one back for Liverpool! #LFC

Brighton caused Liverpool more problems early in the second half, but their wastefulness at key moments proved costly as Firmino levelled with his fifth league goal of the campaign — as many as he managed in the entirety of last season.

Counter attacking soccer at its finest.

Liverpool completed the turnaround and appeared to be on course for a crucial victory after their slow start to the season when Brighton's Adam Webster put the ball in his own net in the 63rd minute.

From 0-2 down to 3-2 up! Liverpool have completed the comeback!

But Trossard was not done yet, completing his treble seven minutes from time and ensuring Brighton left Merseyside with the point they deserved, a draw that keeps them fourth in the standings, four points ahead of Liverpool in ninth.

Leandro Trossard has a hat trick and we are level at Anfield! #BHAFC

"I know we have 10 points and that's the reality. I don't hide from that. We have to go together and build."

Liverpool came into the match under pressure to get a busy October off to a positive start, with leaders Arsenal 12 points clear of Klopp's team prior to kick off against high-flying Brighton.

Firstly, Danny Welbeck flicked the ball through for Trossard to break the deadlock in the fourth minute – the ninth time Liverpool have conceded first in their last 11 league games – before the same man stroked home an almost identical second.

The goal out of nowhere that did get Liverpool back into the match was not celebrated with too much vigour, given the linesman's flag was raised, but replays showed Salah was in fact just onside when diverting the ball into Firmino's path.

Liverpool surprisingly had started the match with Diogo Jota, Darwin Nunez and Luis Diaz all on the bench, but the latter's introduction at the break immediately paid dividends, as the Colombian supplied the pass for Firmino, whose superb touch and finish did the rest.

Liverpool took the lead in the 63rd minute with a goal Brighton goalkeeper Robert Sanchez will not want to see again, as he completely missed his punch, leaving Webster powerless as the ball rolled into his own net off his chest.

Brighton kept coming, with Welbeck denied by a brilliant save from Liverpool goalkeeper Alisson, before Trossard again arrived right on cue at the back post, becoming the third opposition player to score a Premier League treble at Anfield.

"Trossard is a (crack) star," De Zerbi said. "Before when he was in the national team, I sent him a message that he needed to score more goals.

"I believe he can do even better than today. I say this not because I am unhappy with his game today, but I consider him a great, great, player."