Carli Lloyd Refuses To Take Knee With Teammates Before Match

Travis Yoesting August 5, 2021
The USWNT took a knee before playing for the bronze medal at the Olympics. Well, everyone but Carli Lloyd.

Carli Lloyd, it seems, is done being a good teammate.

Lloyd, likely playing in her final tournament for her national team, was the only U.S. women’s national team player who did not take a knee before kickoff of the bronze-medal match against Australia on Thursday in Kashima, Japan. 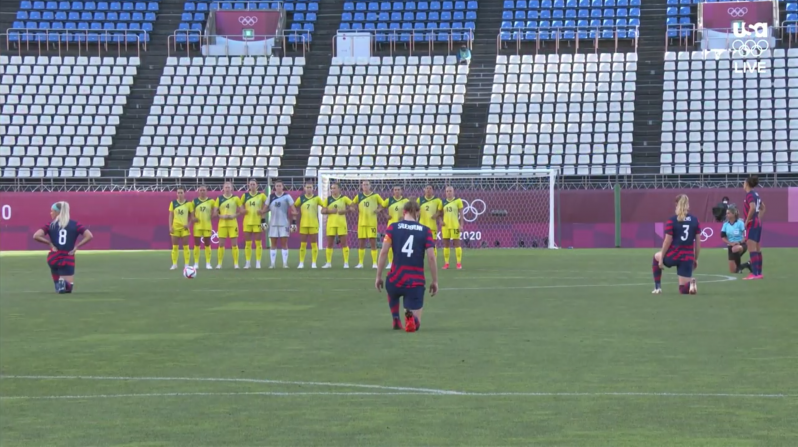 The taking of the knee before matches has been used for more than a year to bring light to the systemic racism and white supremacy that exists in the U.S. and around the world. It started as a response to the murder of George Floyd, using the same protest first employed by Colin Kaepernick kneeling before NFL games.

NWSL clubs were the first professional teams to take a knee before matches in the U.S., leading the way in the fight for social justice. Carli Lloyd did not take part in the 2020 Challenge Cup.

You love to see it. You love to see these women using their voice, demanding better for America, and for black people and people of color. @TheNCCourage and @ThornsFC kneeling in solidarity with @Kaepernick7 and @Blklivesmatter ✊✊✊✊✊ pic.twitter.com/8Urlj5FMPn

The USWNT has taken a knee before kickoff of every match at the Olympics — not during the national anthem, which was briefly banned by U.S. Soccer in 2017 but has been allowed since June 2020, but right before kickoff, similar to Premier League players.

For reasons we don’t yet know, Lloyd refused to take a knee with her teammates before the bronze-medal match against Australia. She could be seen standing nonchalantly as her teammates and the referee knelt just before kickoff. Australia players did not kneel either, but stood side by side, arms locked together.

While it’s impossible to say why Lloyd decided to abandon her teammates like that, it’s clear she has different priorities from the rest of the team. Anyone who has followed the USWNT over her career will have noticed she doesn’t seem to care as much about human rights, whether fighting racism or promoting LGBTQ+ rights, as most of her teammates.

Of course, it’s anyone’s prerogative to do what they want. But as blasphemous as it might be considering how many U.S. soccer fans adore Lloyd, refusing to join your teammates in something that’s so important to them before a game to win an Olympic medal is the action of a bad teammate.

Is Carli Lloyd racist? Probably not. This week she was tweeting praise for Tamyra Mensah-Stock, who became the first Black woman to win Olympic gold in wrestling.

But is Carli Lloyd anti-racist? Probably not. And that’s a problem.

Living in a country where racism is baked into nearly every aspect of society, it’s not enough to simply not be racist, as Ibram X. Kendi wrote in his book How To Be An Antiracist.

“When racist ideas resound, denials that those ideas are racist typically follow,” Kendi wrote. “The opposite of ‘racist’ isn’t ‘not racist,’ it is ‘antiracist.’

At 39, this is probably Lloyd’s final USWNT tournament, perhaps even her final appearance with the national team. Honestly, after refusing to take the knee with her teammates, she might not be asked back to the national team.

Again, Lloyd is perfectly within her rights to do what she wants when it comes to social justice. If she wants to ignore her privileges as a white woman in the U.S., that’s on her. It let’s the rest of America know exactly where she stands.