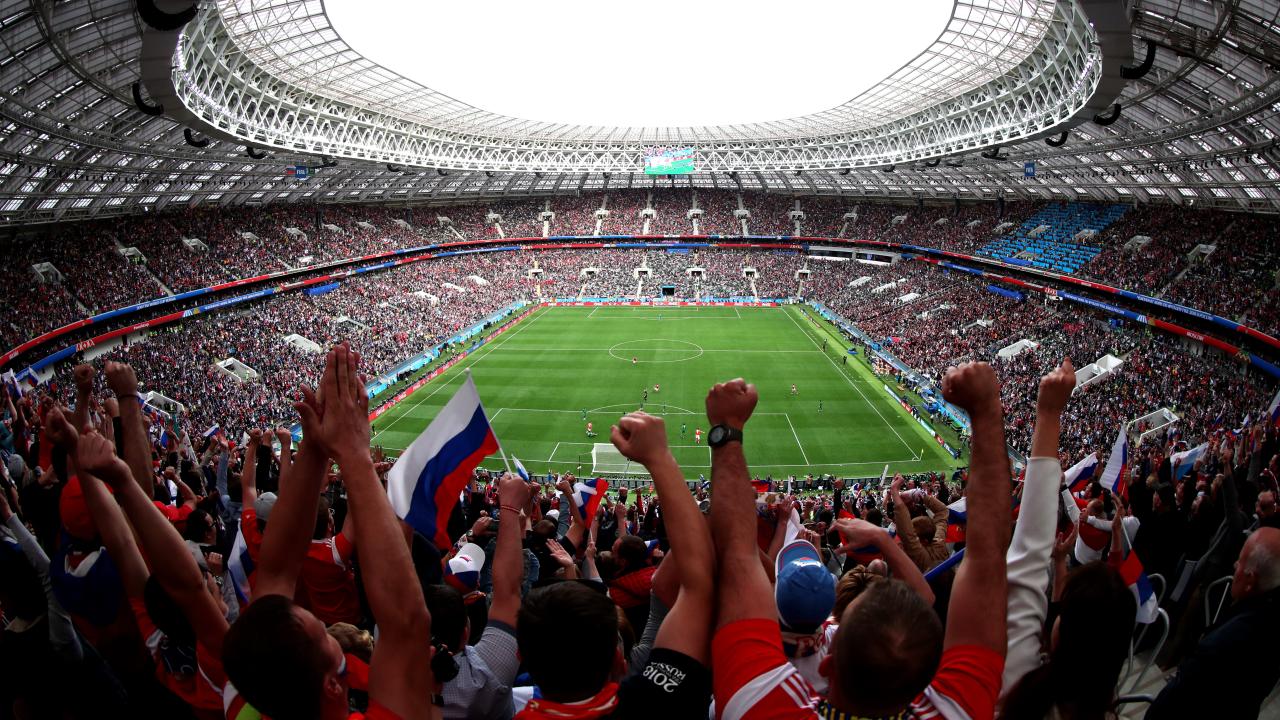 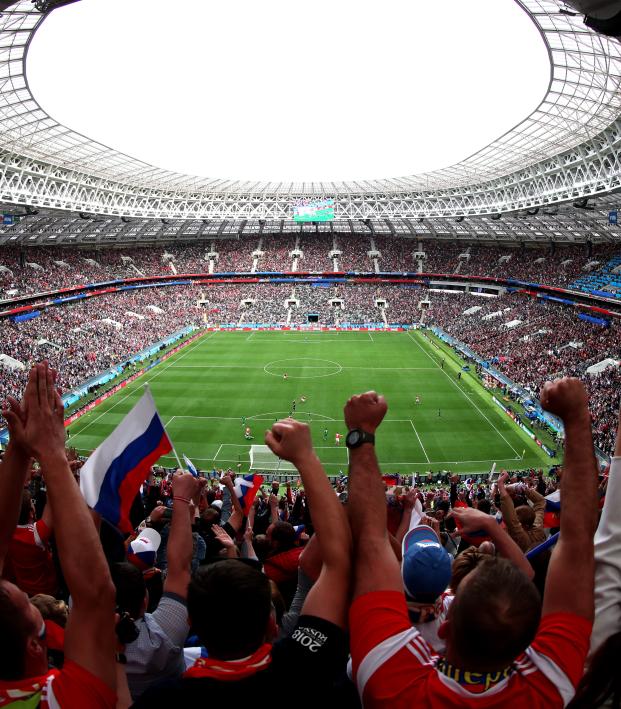 Should Russia Be Banned From The World Cup? There’s Historical Precedent

This week, Russia initiated an unprovoked invasion of Ukraine, the largest attack on a European nation since World War II. Amid global condemnation of the needless aggression and as Vladimir Putin turns his country into an international pariah, sports organizations have quickly moved to strip Russia of major events. While soccer isn’t the primary concern in Eastern Europe right now, many in the footballing world are wondering: Will FIFA ban Russia from the World Cup? Can UEFA kick Russian clubs out of its competitions? How far can soccer’s governing bodies go to punish a nation for committing war crimes?

For better or worse, there is historical precedent for tyrannical governments to be barred from sports.

In the days since the invasion of Ukraine, Russia has seen its sports world rocked. The Champions League Final, scheduled for May 28 in St. Petersburg, was moved to Paris. Russian and Ukrainian clubs were barred from hosting matches in UEFA competitions until further notice. Poland, Sweden and the Czech Republic, who are in the World Cup qualifying playoffs with Russia, asked for those playoff matches to be moved out of Russia, currently scheduled for Moscow in March. Schalke and Manchester United removed sponsorship rights from Russian-owned companies. Chelsea’s Russian owner Roman Abramovich may be banned from owning the club, or at the very least be barred from living in the UK.

Elsewhere in the sports world, the International Olympic Committee condemned Russia for violating the Olympic Truce, a tradition asking nations to lay down arms from seven days before the Olympics begin until seven days after the Paralympics end (March 20). The IOC urged international federations to move or cancel events scheduled to be played in Russia or Belarus (which has aided Russia’s invasion), adding that Russian and Belarusian flags should not be displayed at sporting events.

“The Executive Board of the International Olympic Committee reiterated today the IOC’s strong condemnation of the breach of the Olympic Truce by the Russian government and the government of Belarus through its support in this,” the IOC said in a news release on Friday.

That said, not everyone is ganging up on Russia. The international volleyball federation (FIVB) said it still planned to hold the men’s world championship in Russia in August.

“While the FIVB believes that sport should always remain separate from politics, we are closely monitoring the situation to ensure the safety and wellbeing of all participants at our events, which is our top priority,” the FIVB told Reuters.

UEFA has made no comment on Gazprom, a Russian state-owned energy behemoth, which is a major sponsor of the Champions League and Euro 2024.

A lot has already been done by the sports world to punish Russia, in addition to sanctions levied against the nation by the U.S., the European Union and others. Putin himself probably won’t be too worried by these actions, but his people surely will be, with the value of the ruble tanking this week.

While losing out on hosting rights for various events is an inconvenience for Russian sports fans, there would be much greater uproar if Russia were banned from competing at the world’s biggest events altogether. (Technically Russia is already banned from the Olympics, but the IOC lets Russian athletes compete anyway despite years of cheating by the country and its athletes.)

Specifically, one wonders if FIFA or UEFA could, would or should ban Russia from competing in their upcoming events: the 2022 Women’s Euros, 2022 World Cup, Euro 2024 and Champions League.

When it comes to World Cup bans, there is precedent, for both sporting and non-sporting offenses.

Multiple national teams have been banned from competing at the World Cup over the years, for reasons ranging from human rights violations to attempts to cheat. Here are the notable World Cup bans throughout history, not including the fact in most of the world women were banned from playing soccer for 50 years.

Germany and Japan — 1950
For their roles in World War II, both Germany and Japan were banned from competing in the first post-war World Cup. Italy, however, was allowed to compete because its government was overthrown, and the new government sided with the winners of the war.

South Africa — 1966-1990
South Africa was an international pariah for four decades while apartheid — institutionalized racial segregation — was the rule of the land. FIFA barred the nation from the World Cup and the CAF barred them from the Cup of Nations from 1959 to 1992.
Only after apartheid ended did the Bafana Bafana come out of isolation and begin to compete internationally in the early 1990s. Soon after, South Africa won the 1996 Africa Cup of Nations and qualified for the World Cup for the first time in 1998.

Mexico — 1990
El Tri couldn’t play in Italia 90 because the country used over-age players in the 1989 Youth Championship qualifying round. It was probably the harshest punishment on this list.

Chile — 1994
In a 1990 World Cup qualifier against Brazil at the Maracanã in 1989, Chilean goalkeeper Roberto Rojas feigned an injury by using a razor blade hidden in his glove to cut himself, pretending to have been struck by a flare. Initially, the gambit worked, with the match abandoned despite Chile trailing 1-0.
However, video evidence showed Rojas was not struck by the flare, and Chile was forced to forfeit the match, which cost the country a spot at the 1990 World Cup. Subsequently, FIFA banned Chile from the 1994 World Cup.

Myanmar — 2006
Not expected to qualify in the first place, Myanmar was banned from the 2006 World Cup after refusing to play in a 2002 World Cup qualifier in Iran.

Vuvuzelas — 2014-forever
OK, not really a country, but it’s worth noting FIFA banned vuvuzelas from appearing at World Cups after the instruments became the soundtrack to the 2010 World Cup.

Russia — 2022
Yes, Russia has already been banned from the 2022 World Cup, kind of.
Should it qualify, Russia will not be allowed to participate in the 2022 World Cup as Russia, only as a neutral team, with no Russian flags or anthem allowed.
Russia was banned from all major sporting events in 2019 after the World Anti-Doping Agency found the nation guilty of repeated doping offenses. It’s the same reason Russia has appeared at the Olympics as “Russian Olympic Committee.” The Russian women’s soccer team will have a similar punishment if it qualifies for the 2023 Women’s World Cup.

Will FIFA Ban Russia From The World Cup?

Whether FIFA bans Russian players from competing in the World Cup depends first on the team qualifying. The Russians must beat Poland and then either Sweden or the Czech Republic to reach the 2022 edition. Even if Russia won those matches, the nation’s flag and anthem will not be allowed, per the aforementioned WADA offenses.

Should FIFA and/or UEFA go further? Should UEFA and FIFA ban Russia from the World Cup and other major events?

Ukraine has reportedly asked UEFA to ban Russian clubs from competing in UEFA competitions, including the Champions League, Europa League and Europa Conference League. UEFA has already made it clear no continental competitions will be played in Ukraine or Russia for the foreseeable future. The only team from the region currently still in those competitions is Russia’s Spartak Moscow in the Europa League Round of 16.

UEFA will have to decide soon if it will allow Russia to compete at this summer’s Women’s Euros, hosted by England. Russia is in a difficult Group C with two tournament favorites (Netherlands, Sweden) and Switzerland. UEFA has a bit more time to consider what to do with Russia ahead of its next major men’s international tournament, Euro 2024. Slated to be played in Germany, qualifying for that tournament begins March 2023. However, the 2022-23 UEFA Nations League starts in June, and Russia is in a group with Iceland, Israel and Albania in League B.

UEFA prevented Ukraine and Russia from being drawn into the same group for the Nations League because of Russia’s illegal annexation of Crimea and other interventions in Ukraine. The federation might need to do more.

As for FIFA, soccer’s global governing body has been wildly inconsistent in how it treats ne’er-do-wells. Though South Africa was banned for decades because of apartheid, Russia and Qatar were awarded hosting rights to the 2018 and 2022 World Cups, respectively, despite their own long lists of human rights abuses. FIFA has punished Mexico for fans using homophobic chants but will host a World Cup in a country where homosexuality is illegal.

The point is: It’s impossible to predict how FIFA will act against a country the rest of the international community condemns.

That said, I fully believe FIFA should ban Russia from the World Cup, men’s and women’s.

While the athletes affected will have had nothing to do with the invasion (and at least one has spoken out against the aggression), keeping Russia out of the World Cup is an appropriate response to punish a country for such heinous actions. Additionally, it could help turn the Russian people against Putin if their country is barred from the World Cup.

When you add in the previous WADA ban, it makes no sense to allow Russia to compete at any international sports competition right now. The nation has repeatedly cheated in sports whenever it can, invaded a neighbor under absurdly false pretenses and has a horrible human rights record.

If FIFA has any conviction — spoiler alert: it doesn’t — it would quickly move to ban Russia from the 2022 World Cup, either giving Poland a bye in the playoff round or replacing Russia with Hungary, the next team up in qualifying. Similarly, UEFA should immediately ban Russian clubs from competing in its competitions as well as kicking Russia out of this summer’s Women’s Euro. Such blatant aggressions (and potential war crimes) and past transgressions should exclude Russia from international athletics competitions.

Alas, unless it’s financially beneficial, FIFA likely will not take a stand against Russia.