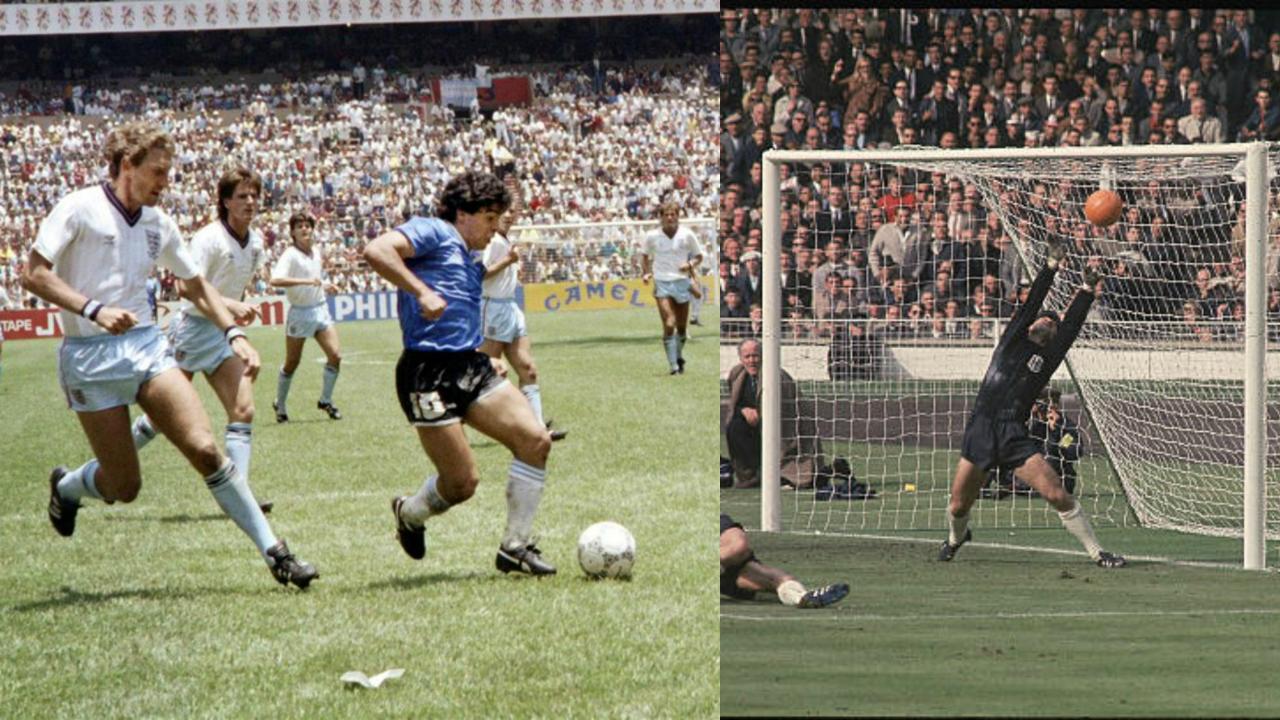 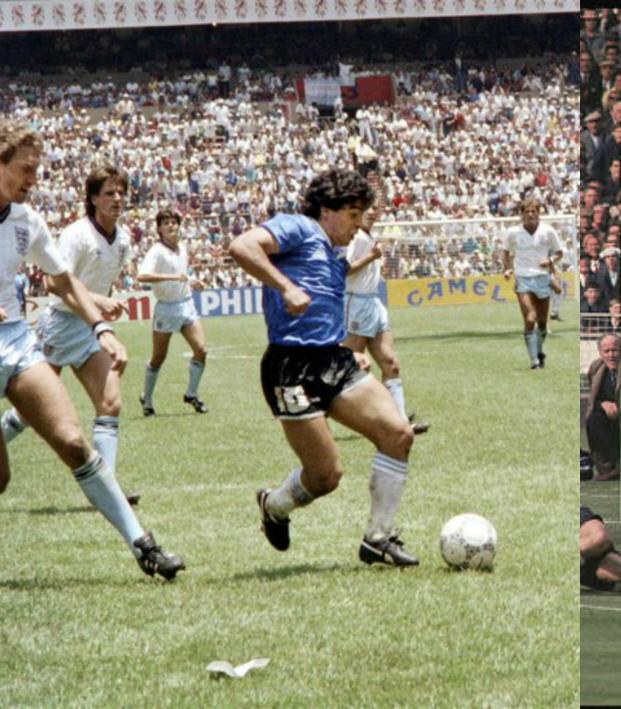 The Most Unforgettable Goals From Every Men’s World Cup

More than any other sporting event, the men’s World Cup captures the imagination through unforgettable moments: goals that make you leap out of your seat in celebration, anger or confusion. The best World Cup goals are those you remember years later, if not decades.

With 20 men’s World Cups having been played since the inaugural tournament in 1930, the best World Cup goals run the gamut from timely tap-ins to otherworldly rocket launches. The scorers include the all-time greats like Pelé and Diego Maradona and unknown heroes like Lucien Laurent and Joe Gaetjens. The one thing they all have in common: they’re simply unforgettable.

This list of the best World Cup goals in each of the tournament’s 20 men’s editions may not always include the most impressive strikes, but every goal is unmistakably memorable as a defining moment in the men’s World Cup.

Lucien Laurent scored the very first goal at a World Cup. It was also quite a nice goal, with the French forward volleying first time on a cross from the right wing. Adding to the momentous occasion, it was scored in the snow, which is always fun.

Italy claimed its second World Cup title with a 4-2 victory over Hungary in the final in Paris thanks to two goals from Silvio Piola. His first, coming in the 16th minute, would have made Arsene Wenger proud with the Italians nearly walking it in after four precise passes inside the Hungarian box.

After a 12-year hiatus due to World War II and in England’s first appearance at the World Cup, Joe Gaetjens provided one of the most unlikely results in World Cup history. It was the Haitian’s header that propelled the U.S. to a shocking 1-0 win over England, the biggest blow by Americans to English pride since the revolutionary war.

West Germany’s 3-2 upset of favored Hungary, which had beaten West Germany 8-3 in group play, was dubbed the Miracle of Bern. Despite going down 2-0 in the opening eight minutes, Helmut Rahn’s goal in the 84th minute capped a comeback for the ages. The German radio announcer yelled “Deutschland ist Weltmeister,” an uncomfortable proclamation less than a decade after World War II. The Mighty Magyars remain one of the best teams to fail to win a World Cup.

Just Fontaine scored a remarkable 13 goals in the 1958 World Cup, but none were all that spectacular or memorable in their own right. Meanwhile, a 17-year-old Brazilian by the name of Pelé finished second in scoring with six (tied with our buddy Helmut Rahn), including two in the final against Sweden. Pelé’s first goal against Sweden, the eventual match winner, was a work of art, leaping high to control the ball with his chest in the box, dinking it over a defender and volleying it into the back of the net (1:15 in the video).

With Pelé injured for much of the tournament (he scored one goal and missed the final), it was Garrincha (four goals) who led Brazil’s surge for a second straight World Cup. Against England in the quarterfinals, Garrincha scored twice and generally bamboozled the English defenders. His second goal put the match away, a beautiful curling effort only possible because the defenders were tired of being beaten off the dribble and gave Garrincha plenty of space to shoot.

Few goals have ever been as controversial as Geoff Hurst’s winner in the 1966 World Cup final against West Germany in England. Tied 2-2 in extra time, Hurst’s shot off the crossbar still divides opinion to this day as to whether the ball actually crossed the line. Nonetheless, the goal was given and he added another in the 120th minute, and England won its only world championship.

Many would suggest Brazil’s 1970 squad was the best in the history of the World Cup and this goal from Carlos Alberto in the final capped the team’s brilliant run to a third world championship in four tournaments. The goal itself was a terrific finish with the outside of the boot and also included a Brazilian defensive player dribbling circles around Italians and an assist from Pelé.

Although the Netherlands ultimately succumbed to host West Germany in the final, the Dutch were the revelation of the tournament, particularly talisman Johan Cruyff. This goal from Cruyff came in the second group stage against Argentina and illustrated his incredible touch, dribbling and composure.

Putting aside all the dramatic off-field aspects of Argentina’s first World Cup victory, Mario Kempes led all scorers with six goals as La Albiceleste edged the Netherlands in an enthralling final in Buenos Aires. Kempes’ last goal was his best, dribbling past two defenders then knocking in his own rebound to score the winner in the final (1:10 in the video).

This goal was great for a number of reasons. For starters, it was a bicycle kick. It also came in extra time of the semifinals against France. To make it even more dramatic, West Germany had gone down 3-1 in extra time before Fischer completed the comeback. West Germany prevailed on penalty kicks after the dramatic 3-3 draw. The match, however, is most remembered for German keeper Harald Schumacher crushing France’s Patrick Battiston without the ref whistling for a foul.

The easiest pick on this list, Diego Maradona scored perhaps the greatest goal in World Cup history — shortly after scoring the most infamous goal in World Cup history. Maradona’s Hand of God often overshadows the Goal of the Century, which propelled Argentina to a 2-1 win over England in the quarterfinals. La Albiceleste went on to win the tournament and thus ensure Lionel Messi will forever be criticized until he wins a World Cup.

Despite having retired from international football, Roger Milla, 38, returned to help Cameroon reach the quarterfinals, the first time an African nation had achieved such a feat. Cameroon won Group B over Romania, Argentina and USSR, with Milla netting twice in a 2-1 win over Romania. In the Round of 16 against Colombia, Milla scored twice in extra time for another 2-1 victory, including his memorable go-ahead goal in the 106th minute (1:17 in video) and another when he dispossessed iconic keeper René Higuita. Cameroon eventually went out in the quarterfinals to England, which needed an extra-time penalty from Gary Lineker to advance.

The best goal of the tournament belongs to Saaed Al-Owairian, who did a Maradona impression with an incredible run before scoring the only goal in a 1-0 win over Belgium to see Saudi Arabia advance to the Round of 16 for the only time in the nation’s history. The most memorable goal, of course, belongs to Andrés Escobar, whose own goal against the host United States cost Colombia a chance to win the World Cup and, tragically, his life.

With all due respect to Michael Owen’s effort against Argentina, Dennis Bergkamp’s brilliant display against the same team was just magical. In the 90th minute of a tied match with both teams playing with 10 men, Bergkamp used one touch to control a 50-yard pass from Frank de Boer, a second to cut inside past his defender and a third to send the Netherlands into the semifinals.

Ronaldo (and his haircut) owned the 2002 tournament, scoring eight goals, including two in the 2-0 win over Germany in the final. Though it was probably his simplest finish, his first goal in the final remains the most memorable because it showed so much about what made him special beyond his insane foot skills. First, there’s his desire to win the ball back after losing it, setting up a shot for Rivaldo. Then there’s his willingness to take a chance and follow that shot up in hopes that the Golden Ball winner Oliver Kahn will spill it. Kahn allowed the rebound and in the 67th minute Brazil had the breakthrough on the way to its fifth World Cup.

Esteban Cambiasso’s finish of perhaps the greatest team goal in World Cup history deserves a mention, as does Joe Cole’s fantastic long-range volley and Phillip Lahm’s opener for Germany. But nothing can compare to the jump-out-of-your-seat thrill of Maxi Rodriguez chesting the ball up in the air and lashing his left boot to send the ball zipping into the back of the net. The goal came in extra time in the Round of 16 to settle one of the more thrilling matches of a thrilling World Cup.

The Dutch left back scored just six goals in 107 appearances for the Netherlands, but his strike against Uruguay in the semifinals of the 2010 World Cup was one of the finest in the tournament’s long history. With no one closing down on him (because who would from that range?) van Bronckhorst unleashed an insanely powerful blast that cannoned straight into the top right corner for the opener in a 3-2 victory. (As Americans, we have to at least mention Landon Donovan’s rescue goal against Algeria, so consider it mentioned.)

It’s hard not to make Mario Götze's winner in the final the choice here, or even James Rodriguez’s hammer blow against Uruguay. But it’s impossible to forget Robin van Persie’s incredible header against Spain. Daley Blind’s spot-on pass from 40 yards found the flying Dutchman wide open as van Persie soared through the air to head in a beautiful goal. The header tied the match at 1-1 right before halftime before the Netherlands memorably routed the defending champion 5-1.

It’s often difficult to pick out the best goal in a World Cup, and you might think 2018 would be no different given the number of stunning strikes. You had Ricardo Quaresma’s trivela, Cristiano Ronaldo’s hat-trick-completing free kick and Luka Modric’s long-range blast. But the best goal of the 2018 World Cup was easily Benjamin Pavard’s sublime volley against Argentina. Ever since that goal, fullbacks young and old have been falling over themselves to recreate the iconic strike, almost always failing.