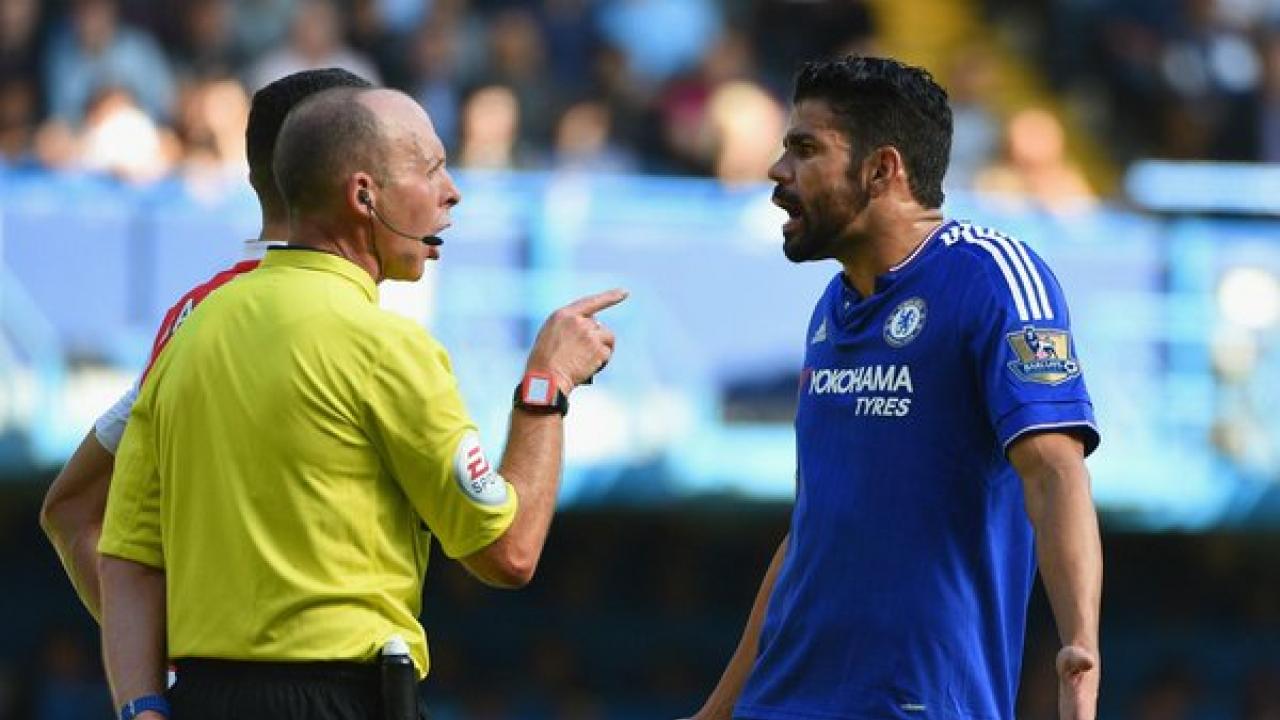 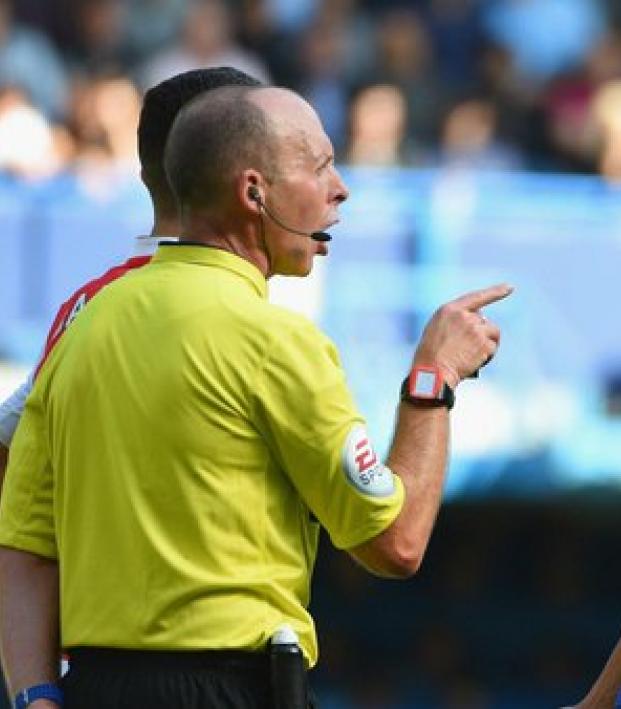 You’ll Be Infuriated By These 20 Shocking Refereeing Decisions

Some referees will let you get away with murder. Others will send you off for bad breath. Getting a grasp on what a ref will and will not allow is vital in every match for those who like to push the line, but getting a grasp on what the following refs were thinking is beyond our abilities.

Sometimes we get an example of both sides within seconds of each other. In 2015 when Diego Costa was in full fight flight with Chelsea, he managed to get away with an obvious red card while provoking one from Arsenal.

First, Costa shoves Laurent Koscielny’s face with both hands before swinging his arm and punching the Arsenal defender across the forehead. Gunners teammate Gabriel Paulista comes to confront Costa before they’re broken up. However, before play resumes, Gabriel gives a tiny, petulant kick at Costa, who makes a meal out of it and convinces referee Mike Dean to send off Gabriel.

Mercifully for sanity, Costa was handed a three-match ban for his antics.

There were plenty of refereeing shenanigans at the 2006 World Cup (read below), but this was the most egregious officiating case.

British referee Graham Poll forgot how to count and gave Croatian Josip Šimunić a second yellow card but did not send him off. Eventually, Šimunić earned a third yellow and was then shown a red card, but not before Poll earned a spot on this list. 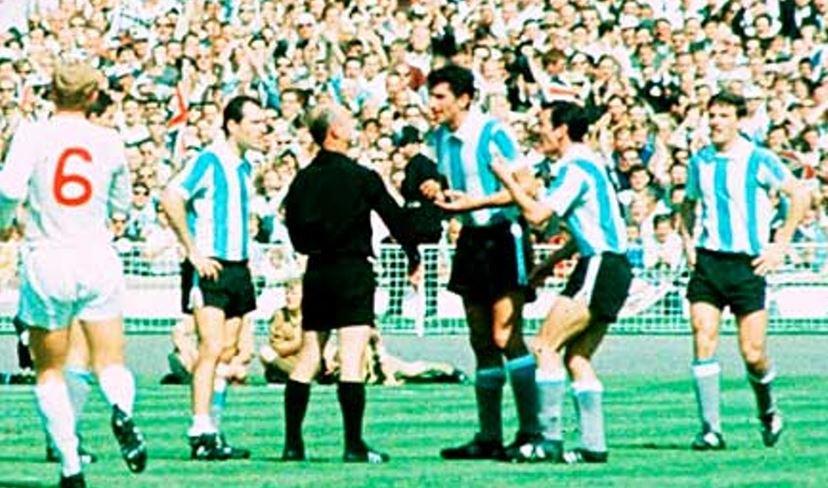 Antonio Rattin tries to argue his case after receiving a red card for "violence of the tongue."

While many look to Geoff Hurst’s questionable goal in the 1966 World Cup final as one of the great controversies of that tournament, England might not have been in the final if it weren’t for the other great officiating fiasco.

In the quarterfinals between Argentina and England, La Albiceleste’s captain and No. 10 Antonio Rattin was sent off inexplicably. The referee later said it was for “violence of the tongue” and that he “did not like the look” on Rattin’s face. Buh?

England won 1-0 on the way to its only World Cup title.

Here’s a twofer from earlier this year: Manchester United’s Zlatan Ibrahimovic and Bournemouth’s Tyrone Mings went at each other with all manner of appendages all match long and somehow neither was sent off.

Ibrahimovic had the nastiest attack, throwing a bow at Mings as the two went up for a header. Mings, however, probably inflicted the most damage with his stomp of Ibrahimovic’s head. It’s amazing both players stayed on the pitch, not just for not seeing red, but for staying conscious through all the head blows.

Ramiro Corrales had a long, storied career playing in Major League Soccer from its inception until 2013, save for a stint in Norway. Despite being the last original MLS player to retire, he’ll probably be most remembered for being sent off while on the bench for the San Jose Earthquakes.

As MetroStars player Amado Guevara came to the sideline to pick up the ball for a throw-in, Corrales pulled on Guevara’s pants, perhaps an attempt at a wedgie. Corrales then went for more schoolboy pranks by towel-whipping Guevara across the abdomen.

Guevara did what any self-disrespecting soccer player would do and pretended the towel hit him in his eye, going so far as to getting a water bottle to rinse out his eyes. The ref bought it and showed Corrales red.

In one of the worst collisions in the history of the game, West Germany’s Harald Schumacher crushed France’s Patrick Battiston in the 1982 World Cup semifinals. Battiston was knocked unconscious, lost some teeth, injured his vertebrae and even went into a coma.

Schumacher wasn’t booked, nor was a foul called. The referee saw the collision as incidental and gave West Germany a goal kick, since Battiston’s shot went wide. Not that he was awake to see the shot.

Back when English clubs still made an impact on the Champions League in 2009, Chelsea received a gift from the referee in the 66th minute when Nicolas Anelka was through on goal and tripped over his own feet. The referee thought Eric Abidal tripped Anelka and sent off the French defender (4:40 in video).

This was hardly the only questionable call of the match (Gerard Pique clearly handled the ball in the box later on), but it was extremely harsh on Abidal and Barcelona. Nonetheless, a young Lionel Messi set up Andres Iniesta for a late equalizer to send Barca through on away goals. The Catalan club beat Manchester United 2-0 in the final.

Fortunate: Everyone left on the pitch for the Battle of Nuremberg

For the amount of talent on the pitch in this 2006 World Cup Round of 16 match between the Netherlands and Portugal, this should have been remembered for much more than a flurry of cards. In the end, the referee showed 16 yellows and four red cards and honestly it could’ve been more.

This match turned into a farce, with skill being replaced by brute force. The image of Barcelona teammates Giovanni van Bronckhorst and Deco sitting side by side after receiving red cards remains a lasting image. But really, everyone in that match should have been sent off, the referee included.

Unfortunate: Kaka sent off for being run into

At the 2010 World Cup, Kaká, who rarely gets even a yellow, was shown red when Ivory Coast’s Abdul Kader Keita ran into him and flailed like he had been stabbed in the face with a trident. It was a shameful moment for soccer fans worldwide.

Fortunate: The worst dive ever

We understand simulation is worth a yellow card, but what Emerson Acuña did deserved a straight red. His dive in the box with no one around him is nothing short of pathetic. I feel dirty just watching it.

You’ve really got to feel for Aleksandrs Cauna, who was given a second yellow for being close to an Anzhi Makhachkala player who must have been shot by a sniper on the roof. Not quite sure what the referee saw.

There’s something about Diego Costa and trouble. He’s equal parts jerk and genius (OK, maybe a little more on the jerk side). We could do a whole list of times Costa was a jerk, with its own merits and faults. Another time.

We’ll just pick this incident from last August when Costa’s cleat went squarely into the leg of West Ham goalie Adrian. Costa wasn’t even booked for the challenge. Why? Because he’s Diego Fucking Costa and he does what he wants.

In the 1994 World Cup in the U.S., Italian Gianfranco Zola was sent off in a match against Nigeria. On the play in question, Zola was muscled off the ball forcefully by a Nigerian defender, leaving Zola on the grass inside the 18-yard box.

Zola, after realizing he wasn’t going to be awarded a penalty, got up and regained possession with a fair tackle (more fair than the one he was just on the receiving end of), only to see the Nigerian player fall to the ground holding his head. The Mexican referee saw something that the rest of the world didn’t and showed red to Zola, whose reaction was priceless.

In the 2002 World Cup quarterfinals, Germany was the clear favorite but plucky United States was giving them everything they could take. It appeared the U.S. would equalize when a shot by Gregg Berhalter was heading for the back of the net when it was stopped at the goal line by the arm of Torsten Frings.

The referee should have sent Frings off and awarded the Americans a penalty. Neither happened. Germany won. Americans cried. Well, the few that were awake in the wee hours of the morning.

Unfortunate: Player-manager sent off for tackling a streaker

While not exactly as high profile as some of these others — it happened in an English non-league match — this red card was undoubtedly an overreaction from the referee.

A streaker wearing little more than a couple strings ran onto the pitch and was eventually tackled by Dorchester player-manager Ashley Vickers. The referee, seeing this as violent conduct, showed Vickers a red card, despite protestations from players on both teams.

This one is quite baffling. While not as dramatic as Frings’ goal-line handball, it still took place in a World Cup match, this time the 2011 Women’s World Cup.

With Australia up 1-0 and looking for more, an Equatorial Guinea defender picked up the ball after a shot was blocked by the goalie and ricocheted into her arms. The defender held onto the ball for a good second or two before nonchalantly dropping it as if nothing had happened.

According to the ref, nothing did happen. No foul was called, no red card given, no penalty awarded. Fortunately, Australia won 3-2 anyway.

Unfortunate: Eric Hassli takes off his jersey for a unique celebration

When he scored a go-ahead goal for Vancouver against New England in 2011 (1:15 in video), Hassli tore off his shirt to celebrate, revealing a second, identical jersey underneath. Hassli was already on a yellow, so of course he was sent off. But we feel it was harsh given the creativity to prepare with a second jersey, never mind the fact he had to play the match with two uniforms.

In a 2009 match between Arsenal and Blackburn, El Hadji Diouf slammed his cleats into the planted ankle of Arsenal goalie Manuel Almunia. The replays showed it was a clear straight red card, but Diouf escaped with a yellow.

Oh look, it’s Arsenal against Chelsea again. This time, a shot from Eden Hazard that was going wide skimmed Alex Oxlade-Chamberlain’s hand on the way out of bounds. Referee Andre Marriner deemed it a red card, only he showed the red to Arsenal defender Kieran Gibbs, who was about eight feet away from the Ox when the incident occurred.

I think the moral of this story is that if Arsenal is playing against Chelsea, Gunners fans are going to find a reason to be upset about the officiating.