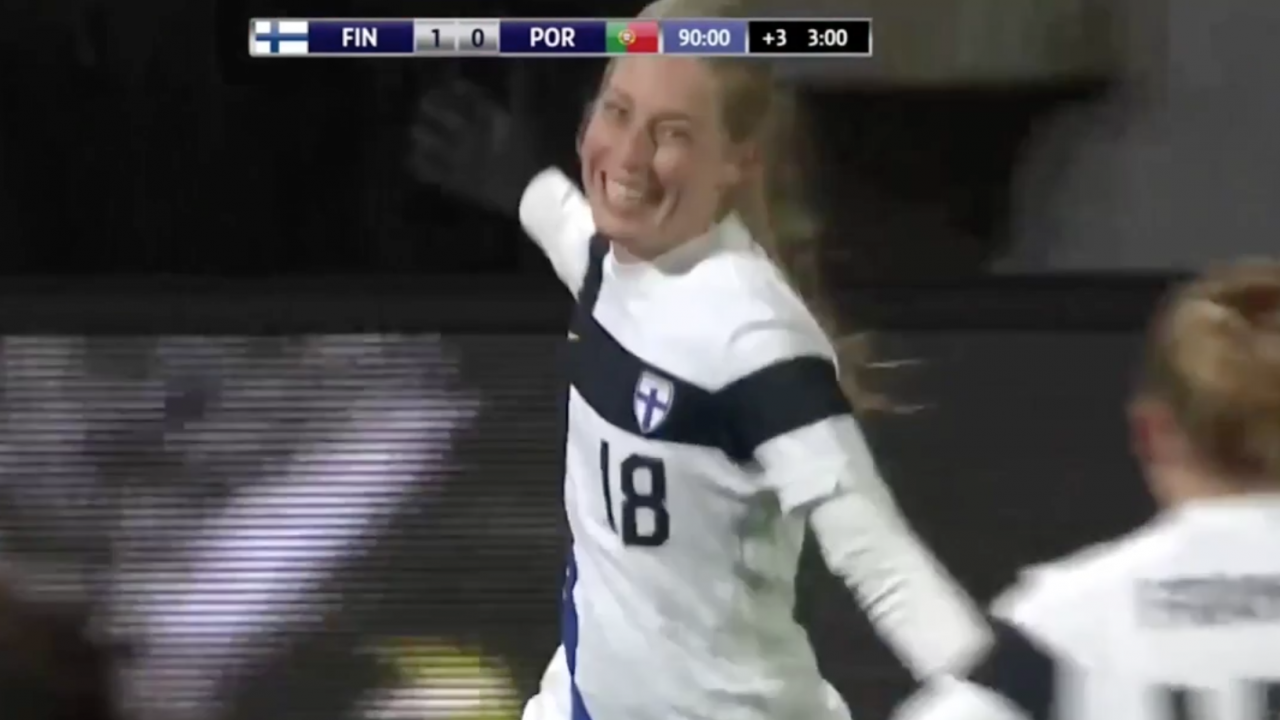 Finland is heading back to the Women’s Euros for the fourth time thanks to one of the best tournament-qualifying goals you’ll ever see. This Finland goal vs Portugal gave the home side a wild 1-0 victory in the final seconds.

Finland and Portugal entered Friday’s penultimate Euro qualifier at Helsinki Football Stadium knowing a win for either side would secure a place in England 2022. A loss would likely mean going through the playoff to earn a berth at next year’s European Championship. For 90 minutes, it appeared neither side would find the breakthrough.

But in the 93rd minute, Finland found a way.

With five seconds left in stoppage time, Linda Sällström received the ball near the corner of the 18-yard box. With time running out and few options available, Sällström took matters into her own hands (feet). With two touches she diced her defender to create just enough space to lob a stunning chip toward the far post. Keeper Patricia Morais could only watch as the ball flew just inside her far post and Finland players wheeled away in wild celebration.

The only thing better than the goal was the call from the Finnish commentators. (Sound on.)

Unless you’re a Portugal fan, it’s impossible to watch that without smiling. Footballing ecstasy translates from any language.

Moments later, the final whistle blew on a 1-0 victory for Finland, booking a spot in next year’s Euros. You could say the team was excited.

The result ensured Finland first place in Group E of Euro qualifying with one match left. Portugal with 16 points cannot catch Finland’s 19 points because the Helmarit (Boreal Owls) own the head-to-head advantage (they tied 1-1 in Portugal).

Finland has never qualified for a Women’s World Cup, but this will be its fourth Euro since 2005.

From England, via Scandinavia, to England!

Despite the defeat, Portugal will finish second in Group E. The top three group runners-up qualify directly to the Euros with the remaining six squaring off in a playoff to determine the final three participants. Portugal will need to beat third-place Scotland by at least nine goals and possibly 13 in the final group-stage match to avoid the playoff.

Also on Friday in Group E, Scotland beat Cyprus 10-0 in a match that was merely for pride. The Scots qualified for the Women’s World Cup for the first time in 2019, but they were pushed out of contention for a spot at the Euros after a similarly wild last-minute goal against Finland in December.

I don’t know what it is about Finland and dramatic late winners, but I sure wouldn’t want to have to face a team with that sort of moxie at next year’s Euros.

Other teams to have qualified for the 2022 Euros include: England (as host), Belgium, Denmark, France, Germany, Iceland, Norway, Spain, Sweden and defending champion Netherlands. Northern Ireland, Russia and Ukraine are confirmed in the playoff, while Austria, Italy, Portugal and Switzerland can still qualify directly. The Czech Republic and Poland are the final two squads still in contention.