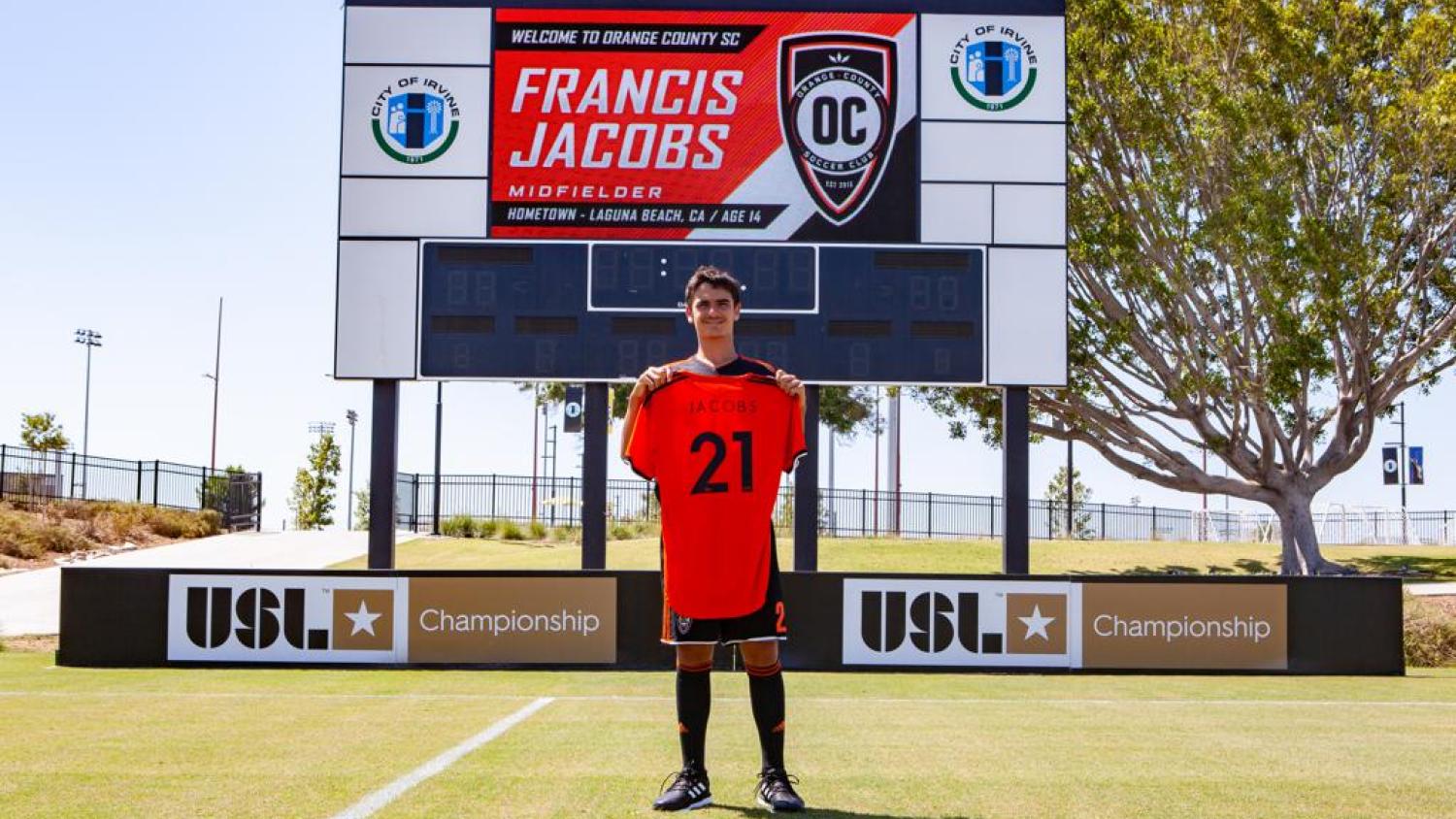 Francis Jacobs became the youngest soccer player to sign a professional contract with a U.S. club when he joined Orange County SC, the club announced Monday. Orange County competes in the USL Championship, the second division of U.S. soccer.

At 14 years, four months and 29 days, Jacobs beats Freddy Adu by about three weeks as the youngest soccer player in the U.S. men’s professional ranks. Jacobs could make his debut against the Las Vegas Lights on Saturday.

“Francis is a special Orange County talent and has shown a maturity on the field way beyond his years,” said Oliver Wyss, OCSC president of soccer operations and general manager. “He is the perfect model of player to develop in our pathway to professional program that we have established here in Orange County. The entire organization is committed to providing him with guidance, training and support as he begins the first step in what we believe will be a long professional soccer career. Our training environment will allow him to learn every day from our experienced technical staff and play alongside top pro players, some of which have played on the highest international level in Mexico and Europe. Francis has a bright future ahead and we are proud to have him and his family as part of Orange County SC.”

Jacobs, a midfielder from Laguna Beach, California, had trials with Cologne and Bayer Leverkusen but decided to stay local. He will attend a local private school in the afternoons to continue his education, according to ESPN.

“I am very excited for Francis, who is a young and gifted local talent, to join our team,” head coach Braeden Cloutier said. “I’ve been really impressed with his poise and ability on the ball that he’s shown us these past few months. This is a great opportunity for Francis, and also an exciting challenge for the entire Orange County SC technical staff to do everything possible to help him reach his fullest potential.”

Jacobs had been playing with Irvine Strikers and has received U-14 USMNT call-ups.

“It is really exciting to be playing for Orange County SC,” Jacobs said. “I would like to thank Mr. (James) Keston (chief investment officer), Oliver and Braeden for giving me this special opportunity. I want to make everybody who has helped me get here proud and I am looking forward to the future.”

Orange County SC is no stranger to signing young Americans. Last year, the club gave 15-year-old Aaron Cervantes a professional contract before he became a regular in goal for the club while also playing for the U-17 USWNT.

OCSC is currently 14th out of 18 teams in the USL Championship Western Conference, five points outside of a playoff position.

While Francis is the youngest male soccer player to go pro, earlier this year Olivia Moultrie essentially went pro when she signed a deal with Nike. However, NWSL rules do not permit players under the age of 18 to play in the league.

Freddy Adu, meanwhile, will have to console himself with a trip to the 2020 Olympic games, should the Americans actually qualify.