Why The U.S. And China Are Buying More World Cup Tickets Than Everyone Else

Travis Yoesting November 28, 2017
Only Russia has bought more World Cup tickets than the U.S., which didn’t even qualify.

Maybe you haven’t heard, but the U.S. will not be participating in the 2018 World Cup in Russia. But that hasn’t stopped Americans from purchasing more tickets for next summer’s tournament than any other country outside the host nation. And the U.S. isn’t the only country that won’t be competing in Russia to rank in the Top 10 in World Cup ticket sales.

FIFA announced Tuesday 742,760 World Cup tickets have been sold so far through the end of Phase 1. Russians make up 53 percent of those sales (nearly 400,000). Next on the list is the United States, a country that will not be competing at the World Cup for the first time since 1986.

FIFA did not release the details of how many tickets were bought by Americans, but there are plenty of reasons for the U.S. to rank so highly. It’s likely there’s a mix of USMNT fans who bought tickets before the team failed to qualify and fans of other countries, particularly Mexico. The U.S. is a melting pot of many cultures and many people will want to go to Russia to root for the nation of their heritage. 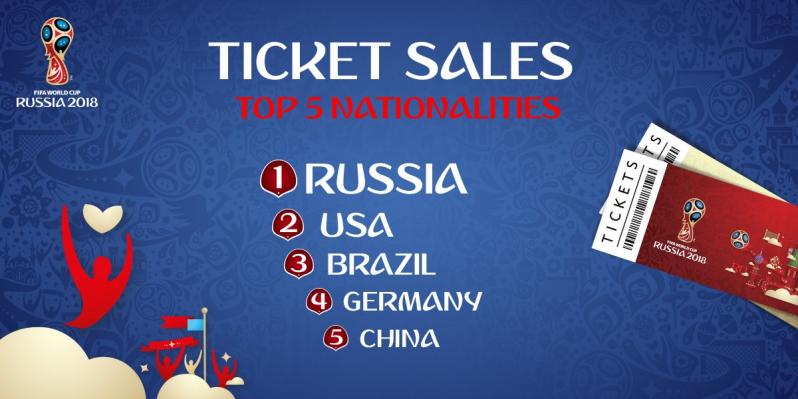 Despite being major players in global economics and politics, China and Israel have both been to a single World Cup: China in 2002 and Israel in 1970. Neither is particularly known for its football, though both are relatively wealthy nations and both are growing on the soccer scene. (Like the U.S., China’s women’s national team has had more success than its men’s team.)

One might wonder why the U.S., China and Israel are so high on the list. While many will still want to go to the World Cup just for the fun of it, it’s conceivable many of these purchasers could be brokers looking to sell the tickets secondhand, explaining why these countries have bought so many tickets. This will be a bit tricky for the Russian World Cup, however, because citizens in many countries will need a visa to enter Russia — unless they bought tickets through FIFA to get a Fan ID. It’s possible Russia will allow spectators to get Fan IDs for tickets bought secondhand, but it’s a risky proposition.

Tickets go back on sale for Phase 2 on Dec. 5, a few days after the World Cup draw on Dec. 1. Tickets during this phase will be sold until Jan. 31 and awarded by random draw. From March 13 to April 3 tickets will be sold first come, first served. Finally, if you miss all those phases, there will be a “last-minute sales phase” from April 18 all the way to the final match to sell any remaining tickets. But if you want to go to Russia for the World Cup, you probably don’t want to wait around that long.