Why USMNT Fans Are So Excited About Ricardo Pepi Picking U.S. Over Mexico 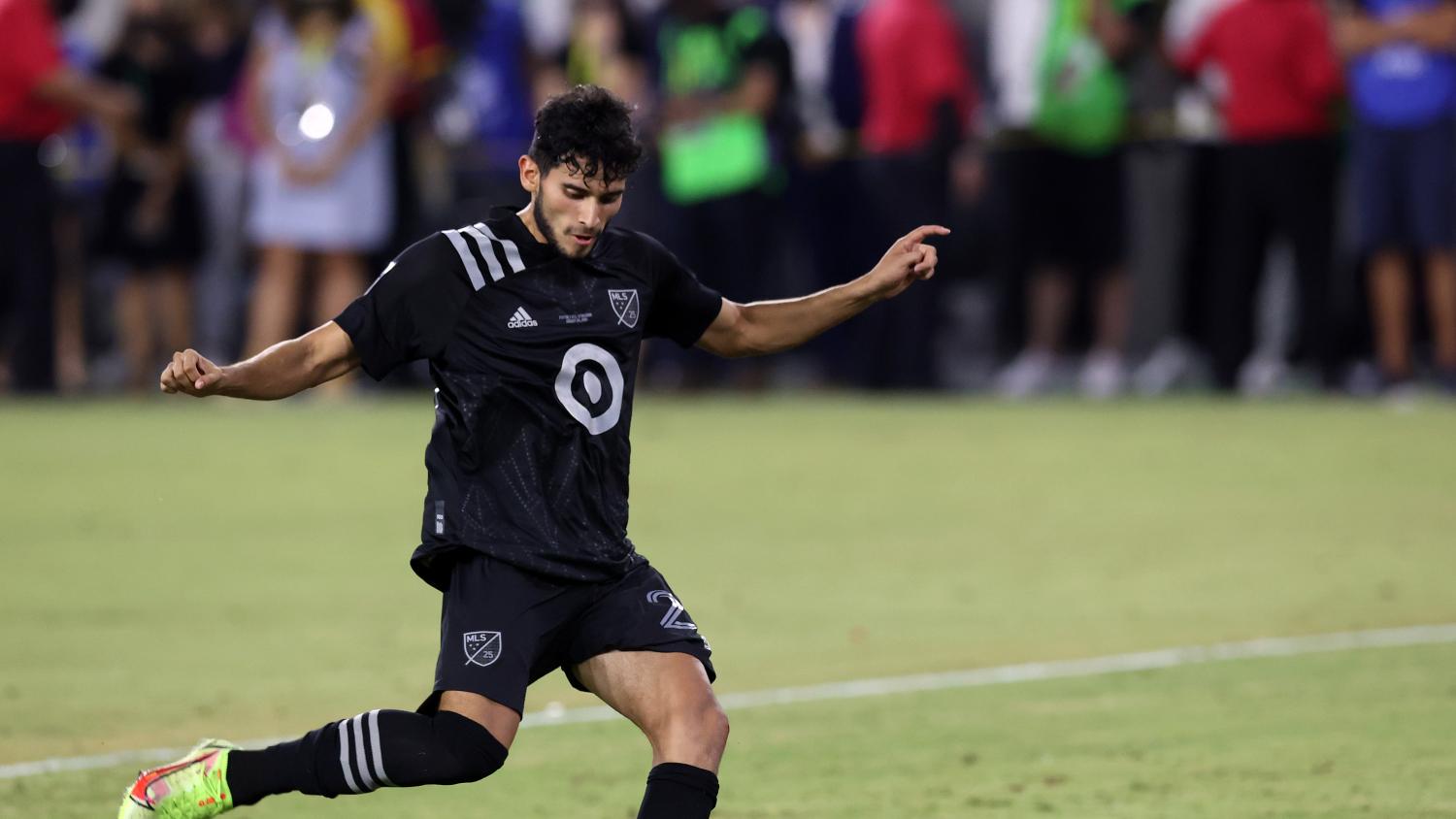 The young Texan was courted by both countries ahead of World Cup qualifying.
Getty Images

When Gregg Berhalter announced his 26-man roster for the upcoming 2022 World Cup qualifiers in September, there were a lot of people wondering where strikers like Matthew Hoppe and Daryl Dike were. A few were also wondering: Who is Ricardo Pepi, the teenager who was one of three strikers chosen to the squad.

The U.S. will play El Salvador, Canada and Honduras from Sept. 2-8 to open Concacaf World Cup qualifying. These are massive games, and after the failure of 2018 WC qualifying, the USMNT can’t take any games for granted.

So it surprised some people when Berhalter chose an unproven MLS player for these vital matches.

Who Is Ricardo Pepi?

So just who is Ricardo Pepi? The 6-1 striker is the most exciting lanky figure to come out of El Paso since Beto O’Rourke. The hype around him only grew after his performance at the MLS-Liga MX All-Star Game earlier this week.

Pepi was born in El Paso, Texas, with family on the other side of the border in Ciudad Juárez. His life was not uncommon for those in the border city, with regular excursions to Mexico to visit friends and family.

Immersed in his Mexican heritage but proud of his American upbringing, Pepi was highly sought after by both the U.S. and Mexico national teams. He was like a 5-star quarterback being recruited by Alabama and Clemson.

Pepi left his hometown to join the FC Dallas academy in 2016 as a 13-year-old. The FCD academy has produced a number of prominent American footballers who have gone on to play in Europe in the last five years, including Weston McKennie, Chris Richards, Reggie Cannon and Bryan Reynolds. Pepi appears to be on the same track, with Serie A clubs like Bologna reportedly interested in his talents.

After half a season with North Texas SC in USL League One, Pepi made his MLS debut in 2019. He made 17 appearances in the abnormal 2020 season, scoring his first MLS goal in March against Montreal before Covid-19 halted league play. Pepi has played in 20 games this season with nine goals and one assist, earning the nickname El Tren — the Train.

In July, Pepi became the youngest player in MLS history to score a hat trick.

Through it all, Pepi was courted by both the U.S. and Mexico national teams, eligible to play for either under FIFA rules. At the U-17 level, he was invited to camps for both nations, ultimately representing the U.S. at the U-17 World Cup alongside the likes of Gio Reyna, Gianluca Busio and Joe Scally.

Why Did Ricardo Pepi Pick U.S. Over Mexico?

During the buildup to the Liga MX-MLS All-Star Game, Pepi was repeatedly asked about his allegiance, with rosters soon to be announced for the upcoming World Cup qualifiers. Before the All-Star Game, reports began trickling in that Pepi would be chosen to the U.S. squad. Of course, he could technically be chosen to both the USMNT and El Tri teams and be forced to make a choice. Pepi remained coy through it all, even after he hit the game-winning penalty kick for MLS against the Liga MX stars he grew up idolizing.

On Thursday, the U.S. unveiled its qualifying roster, with Pepi among the forwards.

The squad that will open the 2022 @FIFAWorldCup Qualifying campaign.

Shortly after the roster was announced, Pepi posted a heartfelt message to his fans in both Mexico and the U.S., explaining why he was choosing to represent the USMNT.

“I want to start by saying that I am a Mexican-American and that I am super proud of my heritage,” Pepi told FCDallas.com. “It’s something that will never be taken away from me, no matter what national team I play for. I made this decision because I felt the USA trusts me and I think that’s due to Gregg Berhalter and how he emphasized this to me. I had good talks with Gregg and I feel I can make an impact with the USA and help this national team really do something special now and in the future.”

“Everyone has supported me. I mean from forever. This country has given my family so many opportunities and it really has helped me achieve my goals. What better way to help them by hopefully one day lifting up a World Cup? I feel warmly welcomed and I can’t wait to show that I deserve to be here.

“I spoke with Gregg, not just last month. He constantly followed up with me and called me twice after that. He showed me that I am special, and I want to show him that I am ready for this moment. I said that when I made this decision it would be with the heart. It’s been made with the heart. If I put that jersey on, I am fighting for it until I can’t fight anymore. So yes, I am ready to play.”

For an 18-year-old, Pepi displayed impressive tact and thoughtfulness in his decision. And unlike many teenagers announcing where they’re going to play college football, he didn’t need to make some big charade around the announcement.

After the roster was unveiled, Berhalter talked about how he convinced Pepi to join the USMNT.

“We’ve been talking to Ricardo long before Mexico has been involved,” Berhalter said during a virtual news conference on Thursday. “That’s their prerogative, they have the right to do that. But we let our environment speak for itself, the players speak for themselves. … For us, it’s not really about what Mexico is doing, it’s about what we’re doing.

“I think the connection is really important. Players need to feel connection to the United States, to our team, to our staff. That makes it easier. So for us, it’s about creating those connections and evaluating how they feel about playing for the United States. What the United States means to them. All of those things are really important. The heritage of a player is something we respect. When a player is a dual-national, we respect they have ties to the other country as well. For us, it’s about creating an environment players want to be in.

“It’s about the players choosing for themselves. I try to be upfront and honest to the player, I want them to make a decision they’re comfortable with. Sometimes, they’re going to choose to represent another country and sometimes they choose to represent us. We have to live with that, but we try to put our best foot forward and let our environment and players speak for themselves.”

What’s Next For Ricardo Pepi?

If Pepi’s performances for FC Dallas weren’t enough, fans were given a glimpse of what he can do during All-Star week, including at the Skills Challenge. It’s clear this young man has talent and potential, making him an exciting prospect for USMNT fans, especially as he continues to grow into his Bambi legs.

Pepi probably won’t be the first-choice striker for the upcoming World Cup qualifiers — presumably Josh Sargent, who is off to a strong start at Norwich, and AFC Young Boys’ Jordan Pefok will be the top choices — but he should see playing time with three games back-to-back-to-back.

It should be noted that even if Pepi appears in all three World Cup qualifiers in September, he will not be cap-tied to the U.S. Last year, FIFA changed the rules for cap-tying young players; now players with three or fewer caps under the age of 21 can change nationalities if they have not received a cap in three years. But if Pepi plays at least one game, his only shot at playing in the 2022 World Cup will be with the U.S.

While it might be too soon to expect Pepi to transfer overseas, don’t be surprised if a move materializes before the end of the year. Tanner Tessmann, a 19-year-old midfielder who also came through the FC Dallas academy, recently signed with Venezia, joining Busio with the newly promoted Serie A club.

Stock in American footballers has never been higher in Europe, and Pepi could be the next FC Dallas product to play abroad.