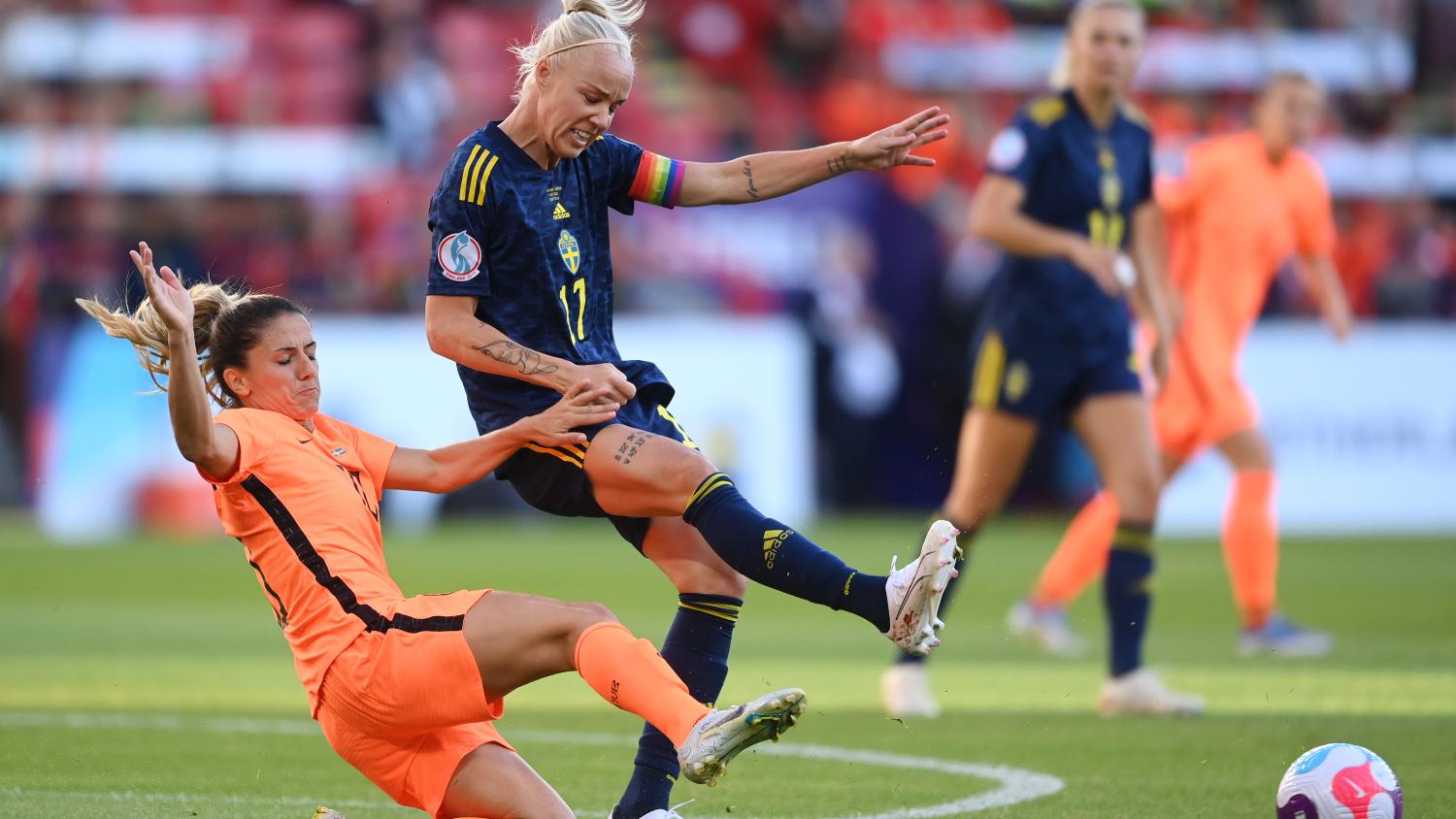 Sweden and the Netherlands played to a mesmerizing 1-1 draw in the group stage of Euro 2022.
Getty Images

If anyone is complaining about the fact the men’s World Cup is not going on right now, they’re not paying attention. With four continental championships taking place across the globe, there’s no shortage of international soccer this summer. On Saturday, we saw two of the best teams in the world go toe to toe in the group stage of Euro 2022. If we’re lucky, we’ll see Netherlands vs. Sweden again in the final.

Defending champion Netherlands and Sweden, Olympic silver medalist at the last two Games, battled to a 1-1 draw on Saturday at Bramall Lane. The enthralling match was easily the highlight of the summer so far, with both teams showing glimpses of why they could lift the trophy at Wembley Stadium on July 31.

The free-flowing, fast-paced, super-skilled match saw goals from Sweden’s Jonna Andersson and Netherlands’ Jill Roord cancel each other out over 90 mesmerizing minutes.

The Swedes were on top early, in part because the Dutch were forced into two first-half injury substitutions, including veteran goalkeeper Sari van Veenendaal, the best goalkeeper at the 2019 Women’s World Cup. Veenendaal was in an early collision on a set piece that banged up two teammates and eventually led to her being replaced by 22-year-old Daphne van Domselaar, who had one cap before Saturday.

Sweden took the lead after Kosovare Asllani nutmegged her defender before crossing to Andersson to make it 1-0 in the 36th minute.

The Netherlands made a few tactical adjustments at halftime and looked far more dangerous in the second 45 after Arsenal star Vivianne Miedema pushed out wide and Roord moved more centrally. It was those two who led to the equalizer.

In the 52nd minute, Miedema made a superb turn near the halfway line to spark an attack that eventually resulted in Roord smashing a shot from just inside the 18-yard box.

Both teams came close to finding winners — van Domselaar settled in and made a fine save in the 87th minute — but the match finished 1-1, a fair result.

Sweden and the Netherlands are expected to advance out of Group C, which also includes Switzerland and Portugal, who themselves played to a thrilling 2-2 draw earlier in the day. No offense to other favorites like England, Germany and France, but I hope to see a Netherlands vs. Sweden final given how good Saturday’s showing was.

With 21,342 fans in attendance in Sheffield, the match set the record for highest attendance at a Women’s Euro match not involving the host nation. The previous record? The 16,819 who watched Spain-Finland a day earlier.

Another day, another record attendance

I can’t imagine being a fan of soccer and denying myself some of the world’s best football. Alas, there remains a huge portion of supposed soccer supporters who refuse to watch half the world’s population play the world’s game. Championships in UEFA, CONMEBOL, Concacaf and CAF are mostly available to watch in the U.S. right now. Sadly, a brief look at our Facebook page anytime we post about women’s soccer shows there remains far too many sexist, misogynist football fans. It’s their loss, really.

In addition to the two Euro matches Saturday, Friday night featured a couple of golazos in the Western Hemisphere.

First at the Concacaf W Championship, Costa Rica’s Katherine Alvarado put an exclamation mark on the nation qualifying for the Women’s World Cup for the second time with this amazing hit.

KATHERINE ALVARADO. WHAT A STRIKE. pic.twitter.com/kShMuqs7u2

Meanwhile in CONMEBOL, though Paraguay lost 4-2, this free kick goal from Jessica Martínez against Colombia was incredible.

WHAT A GOLAZO FROM PARAGUAY'S MARTINEZ! pic.twitter.com/tsbRvGEji2