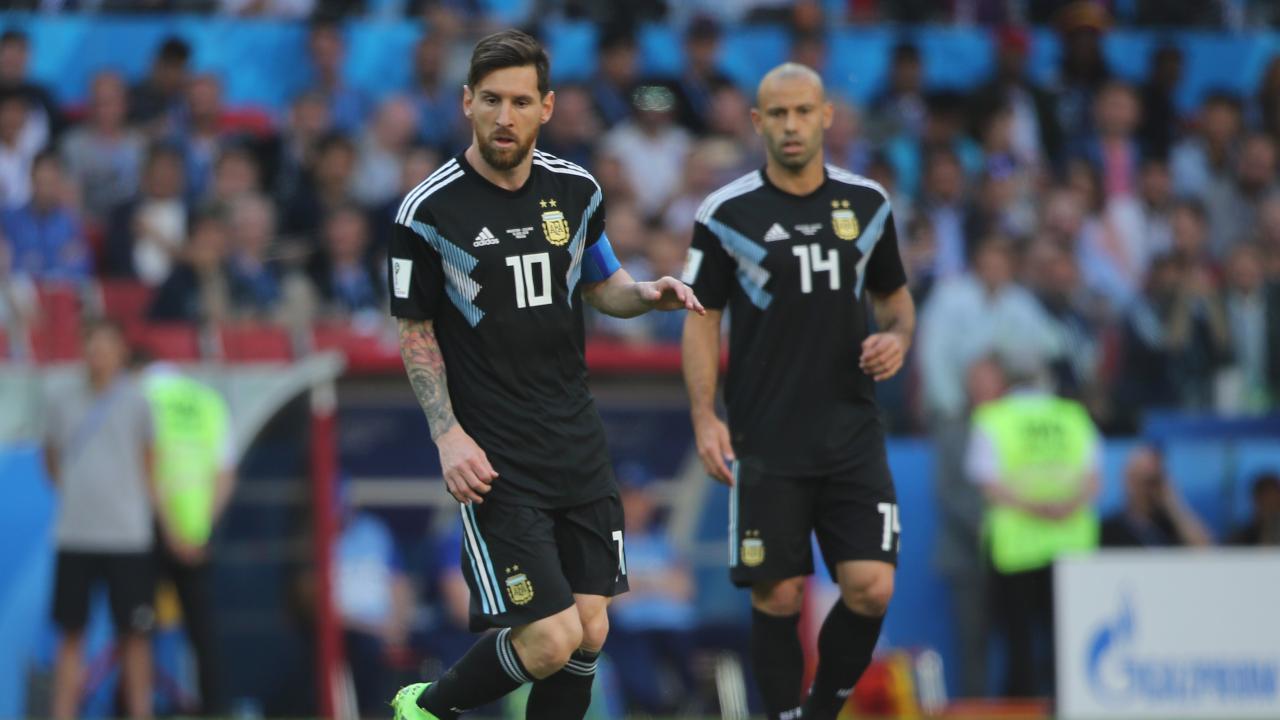 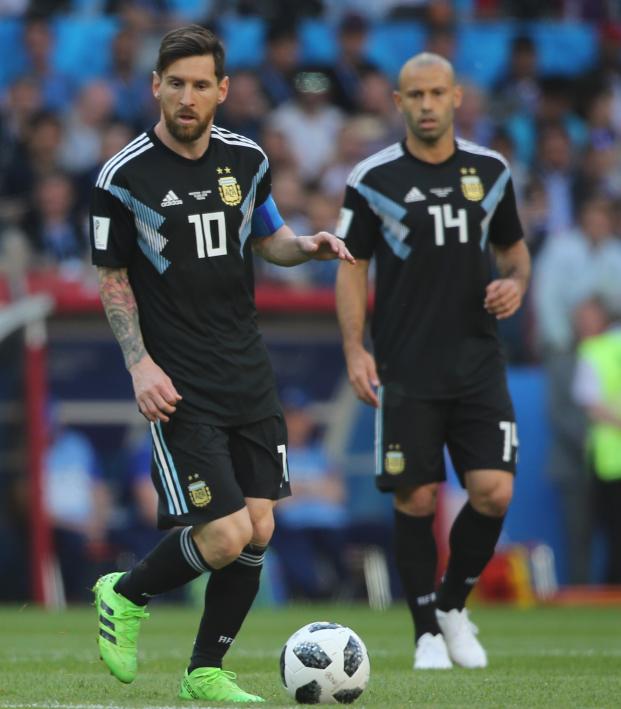 The Myth Of The Argentina World Cup

Huw Thomas June 27, 2018
Somehow, the myth of this Argentina World Cup is still being written. Ridiculous, captivating, terrible and thrilling in equal measure, this is a tournament for the history books.

After Argentina versus Nigeria, a journalist approached Lionel Messi and asked him a question. A few days previous, the same man had given the player a piece of red thread, a good luck charm passed along by his wife. In the aftermath of the forward’s fantastic goal, helping Argentina to qualify for the next round, the journalist asked whether Messi remembered the gift.

Rather than answer, the player bent down, pulled back his sock and revealed the red thread tucked neatly into his sock. It was the sock of his left foot, the one with which he had so delicately caressed Ever Banega’s lofted pass before slamming the ball into the net and opening the scoring.

It was a fleeting, touching moment. A delicate emotional release after the previous days, so full of sound and fury. A gesture signifying nothing but implying everything.

It told us there’s a touch of the mythic about this Argentina team and it’s what makes them — by far — the most interesting team at the World Cup.

To start with, the cast of characters would fit perfectly into a Joseph Campbell book. You could look it up on TV Tropes. First and foremost is Messi himself. The stoic leader, the quiet man who must lead his band of ragtag idiots to glory. The man who heaves the hopes of a nation on his back and is held back by seemingly everything.

Adorned by a good-luck charm tucked into his left sock, Messi is Argentina’s protagonist. On the other side of the tournament is his sworn nemesis, Cristiano Ronaldo. The two have been locked in a head-to-head battle for more than a decade. This is the now last chance for either to play a leading role in lifting the biggest trophy. It is impossible for them both to win. There can be only one.

Then there is Jorge Sampaoli. The man so ruthlessly undermined by his poverty of resources, his mind slowly unstitching as he travels deeper and deeper into the heart of darkness that is the World Cup. He’s a Conradian archetype, an absent father figure, the dead captain with his hand still on the tiller, guided by the waves more than the stars.

His frenzied displays of performative emotion on the touchline spoke of his desire to be involved, of his desperation for every Argentine to see that he cared, even if he was not necessarily capable. But he was no longer in charge. His apparent pleading with the on-pitch players before subs spoke of his undermined authority.

Rather, it seemed the man in charge was Javier Mascherano. The tired warrior. The aged, decrepit soldier whose body is failing him. The man who’s tackling and righteous determination propelled his nation to the final at the 2014 World Cup, sliding so hard into the battle that he ripped himself apart.

But Mascherano is no longer the indomitable Barcelona center back he once was. He’s in China now, essentially in retirement. He’s dragged himself out of the shadows to help his team with one last mission. One last shot at the big time; one last shot at glory. He wants to succeed; he wants to help, even if he is more of a hindrance than anything else. He ended the game covered in blood, having fought the good fight and almost lost his team the match.

There are similar archetypes peppered through the squad. There’s Ever Banega, the clown-turned-artisan. He’s no longer the man who ran over himself with his own car; he’s now the only midfielder with the craft needed to bring the best out of Messi. There’s Maximiliano Meza, the useless buffoon, who is not very good at anything and is probably included as a joke. There’s even Angel di Maria, who might be some sort of elf-type thing.

And away from the pitch, up in the stands, is the most biblical of all the cast of characters. Diego Maradona, the fallen prophet. The man who towers over every Argentina performance at the World Cup, figuratively and literally. The last man who dragged his country single-handed to the title and the stole the hearts of Argentines for the rest of time. The arch trickster, the born winner.

The man who is now past his best and slumps into his seat, vicariously living the emotional turmoil of every single Argentinian at home. He experiences the highest highs and is brought down by the crushing lows on their behalf. He exalting to the point of exhaustion, the preacher brought low by his own sermon. The legend watching on, demanding more stories be written.

There are many myths of this Argentina squad. There are the archetypes, outlined above. There is the stage they play on, the world watching as they seek to write themselves into the history books. There is the great evil of the AFA, the supposedly supporting body who seem hell-bent on holding back its team at every opportunity.

Most importantly of all, there is the myth of quality. There is a notion that this Argentina team is rife with talent. The truth is, in fact, the opposite. This only adds to the fairy-tale nature of their involvement.

Sure, they have in their ranks the greatest player of all time. He’s the super weapon. The blessed sword, which can bring low any foe.

But he is surrounded by next to nothing. The goalkeeping situation is simply a joke. The defenders seem unable to pass at all and perpetually tiptoe along the fine tightrope of ruin. There is no depth at full back and no speed in the center.

In the middle of the pitch, they rely on a 34-year-old Mascherano. Against Nigeria, he was awesome and awful in equal measure. He would lose the ball and then perform a last-ditch tackle. He rallied the troops and gave away a penalty. He led by example and then failed to live up to his own high standards.

Alongside Mascherano is Banega, perpetually pushed aside. Di Maria, who hasn’t had a good game in four years. There’s Cristian Pavon, untested; Meza, terrible; Lucas Biglia, a Mascherano tribute act incapable of playing the hits. There’s Giovani Lo Celso (a child) and Enzo Perez (a nobody). There is no Cambiasso, no Zanetti, no Ayala, no Riquelme. There’s very little at all.

The temple of Messi is built on the sallowest of foundations.

Ah, people respond. But the strikers. Argentina has such a strong attack, they cry. Technically, perhaps. They have Messi, after all.

But behind their best player, things become difficult. Paulo Dybala, for example, cannot seem to play on the same pitch as Messi and has a temperament ill-suited to the biggest games. There’s Gonzalo Higuain, the man most responsible for Argentina losing three finals in a row. There’s Sergio Aguero, an incredible striker who is apparently incapable of taking instructions. Mauro Icardi has been left at home. No one else in the squad would scare defenders.

To watch this team play is to see the myth of Argentina in full effect. They are a nervous, paranoid, tired, brilliant side. They are fascinating to observe, simply because they are so deeply flawed. They are the troubled protagonist at the center of their own story. It’s comedy and tragedy all at once.

In the next round, they will face France. Didier Deschamps’ team is the exact opposite of this. Theirs is a tired, dull technocracy. An incredibly skillful and ultimately vacuous experience. There is no myth making about this French side, simply relentless, mind-numbing competence. Doing the bare minimum and succeeding.

The whole rotten edifice of this Argentina World Cup bid will likely crumble in the face of Gallic mediocrity. But there’s no real narrative there. Unless you’re French, it’s fairly dull. Deschamps has taken the most talented generation of players his country has produced in decades and turned them into England circa 2002. Less than the sum of their considerable parts.

That’s why Argentina’s run is so important. It’s exciting. It’s thrilling. It’s constantly about to collapse in on itself in the most dramatic way possible. Late goals. Dressing room coups. Good luck charms. Heroic archetypes. One great player leading a band of average fools to glory. This is the best story of the World Cup right now.

The myth of Argentina is, miraculously, still being written.