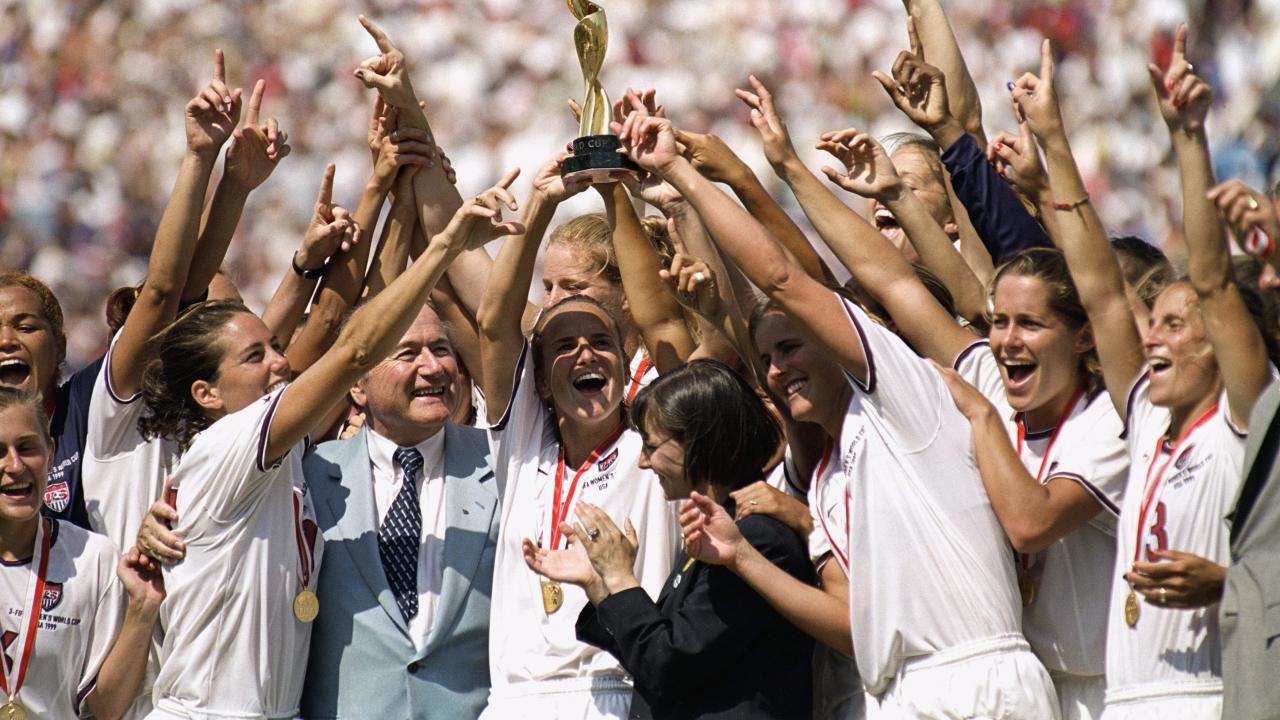 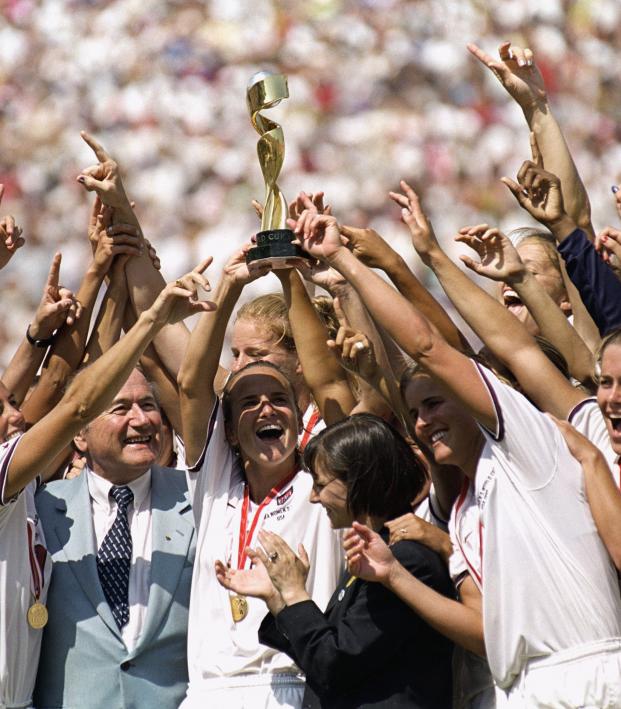 Ever Wanted To Own An Actual World Cup Winner’s Medal? Now You Can, For A Price

Travis Yoesting October 4, 2019
Arguably the most dominant footballer of all time is selling her World Cup and Olympic medals along with dozens of pieces of memorabilia for a good cause.

She retired as the greatest to ever play her sport. Many would argue she’s still the most dominant women’s footballer to have ever graced the pitch. Now you can own her most legendary trophies, medals and memorabilia thanks to an incredible Michelle Akers auction from Goldin Auctions.

Michelle Akers racked up dozens of trophies throughout her storied playing days, which began as a member of the first-ever USWNT in 1985. She was named FIFA Woman Player of the Century in 2002 and was one of two women FIFA deigned worthy of its FIFA 100 list of the 125 greatest living footballers in 2004.

In 1991, Akers won the Golden Boot with 10 goals on the way to helping the United States win the inaugural Women’s World Cup, a record that still stands. She played through a torn ACL to help the USWNT win gold in the inaugural Olympics women’s soccer tournament in 1996. And she capped her career by ignoring the pain of a dislocated shoulder as the U.S. won the 1999 Women’s World Cup.

Now, all those trophies/medals and more are up for sale in this Michelle Akers auction.

Akers has nearly five dozen pieces of memorabilia from her World Cup Golden Boot to her Hall of Fame induction ring up for auction, meaning you can own a piece of soccer history, for a price.

The Michelle Akers auction runs through Oct. 19. You can check out the full collection here.

“Michelle is an icon of the world’s most popular sport,” said Ken Goldin, founder of Goldin Auctions. “This collection shows why, spanning across two decades of excellence.”

It’s incredible to see this much soccer history available in one collection up for auction and I’m sure most of you have two questions: How much? And why?

To answer the question of why, we reached out to Goldin Auctions but have not yet received an answer. A portion of proceeds from the Michelle Akers auction will go to the Michelle Akers Horse Rescue and Outreach Foundation, a horse/animal rescue work and farm relocation program, so that appears to be the impetus for the auction.

FIFA Player of the Century Award. This is one of the biggest awards of my career and when I look at this award and think about being Player of the Century and what it means, it represents not necessarily one player, but an amazing journey. The journey of my career and the game and everything along the way. It represents who I played with (the best players in the world on the best team in the world) and the ones who coached me (Anson Dorrance, Tony DiCicco), and the opportunities available (Title IX, a USWNT in 1985, an endorsement by UMBRO 1991, a World Cup 1991, a paid player contract 1995, an Olympics 1996, etc), and it holds the memories of the opportunities I did not have and the many challenges endured on and off the field (injury, no pay or very little pay, no pro league, inequality, disrespect, crappy fields, poor equipment, etc). To me the Player of the Century is about all these things... and since I was there from Day One (with the USWNT), it allows me to view and experience this through the dream born in me as a little girl in Seattle, Washington (of one day being the best player in the world playing on the best team in the world). So with that as the context, it seems fitting to me to be passing this award on (and with it the dream), so it can continue to inspire as it has inspired me Go register to bid for this and the rest of my personal memorabilia collection at www.GoldinAuctions.com. Please share! All proceeds go toward my horses/animal welfare work, farm relocation, family time, and fulfilling the next steps of my life dream thank you

For the question of how much, prices in the Michelle Akers auction range from a $25,000 minimum bid for the 1991 World Cup Golden Boot trophy to $100 minimum for a Mike Stanley game-worn Red Sox jersey that was gifted to Akers. The two Women’s World Cup winner’s medals and Olympic gold medal are $20,000 each.

Of course, unless you’re the type of person who spends $75K on a watch, these trophies are probably out of your price range. There are some slightly more affordable options.

Keep in mind, these are all minimum bid prices. This is an auction, and prices will only increase.

On sale since Sept. 23, only 23 of the 59 pieces have had bids placed on them as of Friday afternoon, mostly on the cheaper items. No bids have been made on the most precious pieces costing five figures.

Whether or not there will be a late rush from bidders as the auction comes to a close — like every eBay auction I’ve been involved with — remains to be seen. Personally, $20,000 for an Olympic gold medal seems like a steal, but then again, I don’t what $20,000 even looks like because I’m a poor sportswriter. But for any regular Joe millionaire, $20K is nothing, right? Maybe John Oliver will buy one of the items to give to his wax presidents.

For those who are worried about Akers losing all her memorabilia, don’t fret. She’s not selling everything.

I know you will be disappointed, but my original @MiaHamm Barbie (chewed and much loved by my dog Lucy)(and featured in the recent @juliefoudy @espn 99WC special) will NOT be included in my memorabilia auction @goldinauctions! But you can still register to bid on some of my other items that are almost as cool  BTW one of my other fave USWNT players @abbywambach also has her own Barbie, but my Lucy dog did not get the chance to enjoy  If I had a Barbie she would have boots, Levi’s, #10 jersey, cowboy hat, horses and dogs, and many surgery scars on her knee & shoulder, messed up Tony DiCicco (GK) fingers, and crazy curly hair. What say you @barbiestyle? Let’s do it

And it’s also important to remember all proceeds are going to a good cause, one Akers is passionate about.

A few of the rescues who I care every day at the farm and will benefit from this auction. Phoenix in the back (big bay mustang gelding). He was captured by the BLM in Wyoming 10 years ago... and I took him in from a bad situation. Has anxiety and gets worried with every small change of fencing, two minutes late to feed, etc, but a good man and always tries hard. He has inspired (again) my love for mustangs and desire be involved in their protection etc. The mini Cami at front is cute as can be and thinks she The Queen of All. Adores Phoenix. Has never liked me despite my best efforts (she is kind of like a cat, very aloof and bossy) and always a struggle to give vaccinations. Has dragged me 30 yards in the dirt with a syringe stuck in her neck before. Cheyenne is the paint mare on the left. I call her my one-eyed girl... because, well, she has one eye It was removed due to an unknown trauma and she’s needed several surgeries to clear up infection and pieces of “stuff”. And oh my gosh a sweet, sweet girl who loves to be brushed and rinsed with cool water. Needless to say, these guys have been through the shit and now have come back to themselves through consistency, patience, and respect. I am auctioning off my memorabilia (in part) to give them a stable (no pun intended), loving, forever home and herd. It would be my privilege to to do that for them (yes even Cami who is such a primadonna) Please share and register to bid at www.goldinauctions.com. More info to donate or get in touch at www.michelleakers.org #gratitude

So if you’ve ever wanted to own a World Cup winner’s medal without doing any of the work necessary to actually win one, this Michelle Akers auction is your chance. Or better yet, make a donation to help one of the world’s greatest footballers care for animals in need.