Meet The Captain Who Chugs Beer With Supporters After Victories

Connor Fleming April 22, 2016
Minnesota United FC's Justin Davis enjoys quite a rapport with supporters. He literally never has to buy his own beer in Minnesota.

Minnesota United FC captain and defender Justin Davis has created one of the most enviable traditions in the world of soccer. Beginning in September of last year, Davis began the custom after scoring the go-ahead goal against Indy Eleven at Minnesota’s National Sports Center.

Sprinting towards the supporters in the Budweiser Beer Garden at the North End of the stadium, Davis began motioning towards revellers in the section and asking for a sip.

Justin Davis begins the chugging tradition (skip to 4:56 for the libation):

According to the custom's lore, the celebration had been planned by Davis’ Minnesota teammates, who thought it would be a cool piece of camaraderie between fans and player.

It didn’t take long for the celebration to actually take place. Davis has a penchant for scoring goals, last year he was the NASL’s highest scoring defender with five goals. In 2014, he scored the game-winner in a friendly against Premier League side Swansea City. 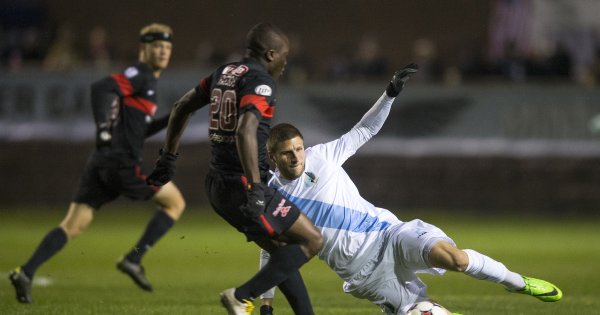 Davis drank with supporters following subsequent home wins, and it certainly looks as though the tradition isn’t going to die anytime soon. Speaking with Andy Greder of The Pioneer Press, Davis said, “If they hand me a beer, I’m not going to not drink it. That’s our thing now. If we keep winning, I’ll keep doing it.”

So, what does Minnesota United coach Carl Craig think of his captain's imbibing of the amber nectar? As a native of Newcastle upon Tyne, a city famous for its raucous nightlife and Newcastle Brown Ale, pretty much just what you’d expect: “I’m jealous; it should have been me…there are things right now that create that little connection or help keep the connection between the fans and the players. I think the longer you hold onto that type of thing, the better.”

Here's to hoping that the celebration will still be around come 2017, when Minnesota joins Major League Soccer as an expansion franchise.