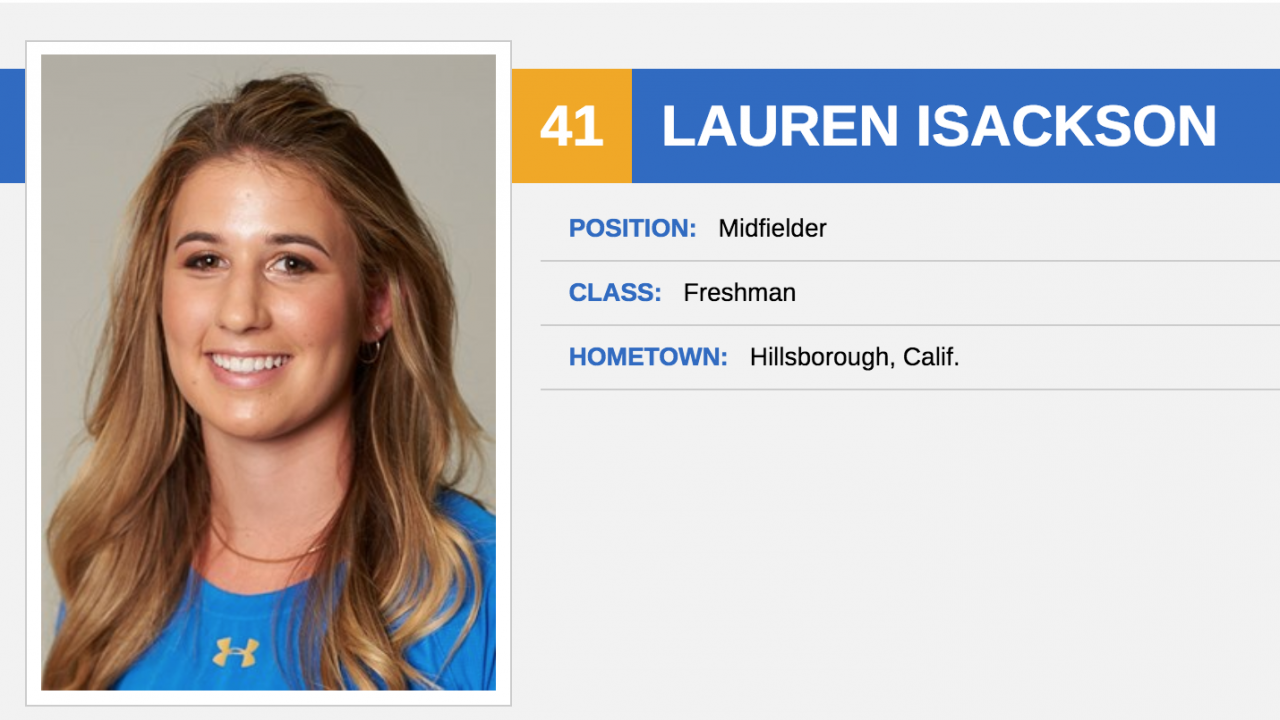 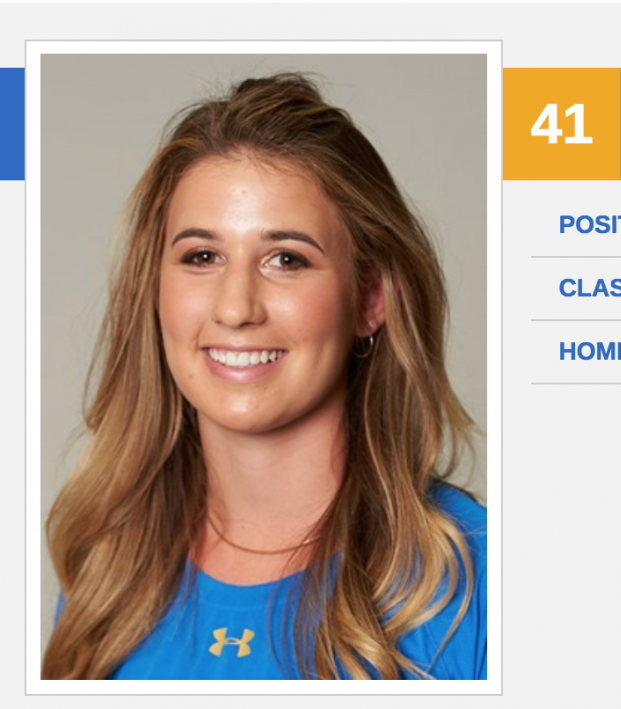 The college admissions bribery and cheating scandal that gave the U.S. a rare opportunity for everyone to come together in outrage last week isn’t a story that’s going away anytime soon, from the celebrities and college soccer coaches implicated to the state of college admissions in the country.

For those who missed it, a man named William Singer was the ringleader of a network of people cheating the college admissions system and among 50 people charged by the FBI and federal prosecutors. Sometimes this involved cheating on standardized tests, but it also involved taking advantage of more lax admissions standards for student-athletes. Singer would create fake athletic profiles and pay off college coaches to say they were recruiting these students who were not athletes so said they could breeze through the far-less-stringent admissions process for student-athletes.

Thanks to some digging from the Los Angeles Times, we now have some more information on one of the supposed college athletes, one Lauren Isackson.

Isackson was admitted to UCLA in June of 2016 after posing as a women’s soccer recruit as part of the class of 2017, the No. 2-rated recruiting class in the nation, according to Top Drawer Soccer. Among her purported accolades was being named honorable mention all-league in 2014 in the West Bay Athletic League in Northern California. False, but also laughably tame compared to the accomplishments of her would-be teammates on one of the best teams in the country.

But unlike other student-athletes admitted under false pretenses in this scandal, Isackson was actually forced to be a member of the team.

Given the No. 41 jersey (13 higher than any teammate and a clear sign of disrespect), Lauren Isackson appeared on UCLA’s 2017 roster as a 5-3 freshman midfielder. She never appeared in any games, nor was she in the team’s group photo on the UCLA athletics website.

But she did have her own bio page on the UCLA website, where she was lauded for such accomplishments as the aforementioned all-league honorable mention selection, being team captain at Woodside Soccer Club and being named team MVP for her club. Of course, these were all false as well. The LA Times reported it could find no evidence of her playing for Woodside Soccer Club.

Comically, her bio lists her “greatest athletic thrill” as “becoming the champion of her hoseback  (sic) riding division two years in a row.” Why lie about soccer accomplishments but then not lie about your biggest athletic thrill? Just make something up about scoring a bicycle kick against Alex Morgan or something. (Also, spell horseback correctly ffs.) 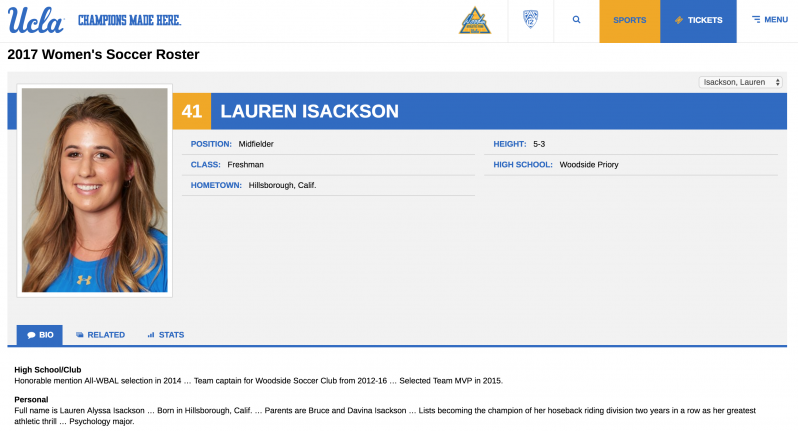 Lauren Isackson is still a student at UCLA, but no longer on the soccer team. Screenshot: UCLABruins.com

As a supposed roster member of the UCLA women’s soccer team in 2017, she in theory became a national runner-up that year, as the Bruins fell to Stanford in the Women’s College Cup final. She was “teammates” with Hailie Mace, the No. 2 pick in the 2019 NWSL College Draft, along with other studs from the youth national teams of the U.S. and Canada. She would’ve been teammates with USWNT standout Mallory Pugh, but she opted to forgo her UCLA career to head straight to the pros.

Of course, it was all a sham.

UCLA men’s soccer coach Jorge Salcedo was among the 50 people charged last week and was apparently the point-man for getting Isackson into UCLA. He has since been placed on leave by UCLA. USC women’s soccer coach Ali Khosroshahin was also charged and it seems he was involved in Isackson’s case as well. Hilariously, Isackson’s parents tried to get her into USC first, but a “clerical error” put her in the admissions pile with non-athletes, so she didn’t stand a chance of getting in and the family tried UCLA, with Khosroshahin reportedly passing on the fake athletic profile to Salcedo.

Normally we’d be a little reticent to publish the student’s name when it was her parents, Davina and Bruce, who were accused of the crime. But it’s clear Lauren was in on the whole thing, unlike some other students whose parents went to great lengths to prevent them from learning they were too dumb to get into school the legal way. Court filings showed Lauren was copied on an email thanking Singer for his efforts to fudge the system and she surely knew she didn’t belong on one of the best college soccer teams in the country.

Perhaps the best bit of schadenfreude in the Lauren Isackson story comes from a conversation between Bruce Isackson and Singer, who at this point was working for the FBI and wearing a wire.

“If they get into the meat and potatoes (of this scheme, it could be) the front page story,” Bruce Isackson reportedly said.

“The embarrassment to everyone in the communities. Oh my God, it would just be — yeah. Ugh.”