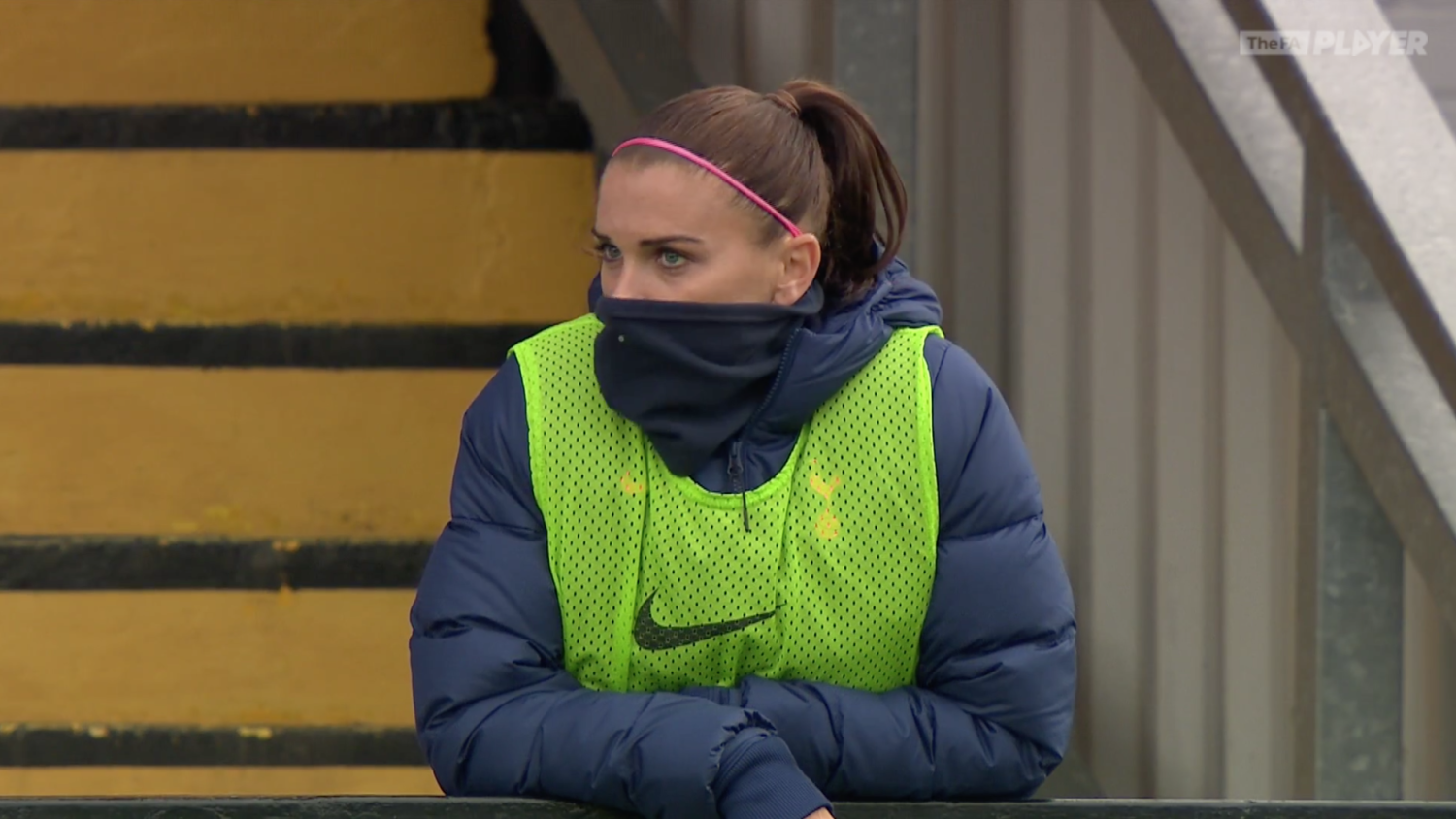 Alex Morgan didn’t get on the field in her first match at Tottenham. The USWNT striker was an unused substitute as Spurs lost to North London rival Arsenal in the quarterfinals of the FA Women’s Cup. But Morgan did get a front-row view of the gorgeous Jordan Nobbs goal vs Tottenham that sent Arsenal on its way to a 4-0 win.

Morgan left the Orlando Pride for Tottenham, the seventh-best team in the 12-team Women’s Super League, England’s top flight, earlier this month. She was named to the bench for the North London Derby, having not played in more than a year.

Spurs, clear underdogs against the best team in the history of the FA Women’s Cup (14 titles for Arsenal, equal to the Arsenal men’s record), held their own for most of the match. The Gunners scored 15 goals in their first two matches of the WSL season but were scoreless after an hour of play.

The Tottenham coaching staff (Karen Hills and Juan Amoros are co-head coaches) probably thought they could try to keep the match close and bring on Morgan late to pull off an upset. The plan nearly worked, until a moment of brilliance from Nobbs broke the deadlock and opened the floodgates.

In the 72nd minute, Nobbs intercepted a sloppy pass in the back. The England international’s first touch perfectly set her up for her stunning second, as the midfielder spotted the Spurs keeper off her line and beautifully chipped in the opener.

When Alex Morgan moved to Tottenham, someone asked me: Why didn’t a team like Arsenal sign her? My response was that Arsenal already has a better, younger version of the USWNT star: Vivianne Miedema. While the Dutch striker didn’t score on Saturday, she set up the second with a wonderfully weighted through ball to Lisa Evans in the 74th minute.

After the second goal, Arsenal subbed out Miedema but didn’t stop scoring; Evans doubled her tally in the 84th minute.

Evans completed her hat trick in the 90th minute.

Though she didn’t make it into the match, the announcers spent plenty of airtime on the American. At one point, after cameras again panned to Morgan on the bench yet again, one of the announcers asked: “Do we think the more times we put her on camera, the more likely she’ll be put on the pitch?”

Unfortunately for USWNT fans, Morgan was left on the bench, with Spurs coaches opting to not risk injuring her in a match that was too far out of reach in the closing minutes.

Morgan was an unused substitute in Spurs' 4-0 defeat to Arsenal pic.twitter.com/LaUQQuKGGi

The next chance to watch Morgan play for Tottenham will be on Oct. 4 when Spurs play at Manchester City, new home of Rose Lavelle and Sam Mewis. That match will be available on NBCsports.com, Fanatiz.com and Atafootball.com in the U.S.