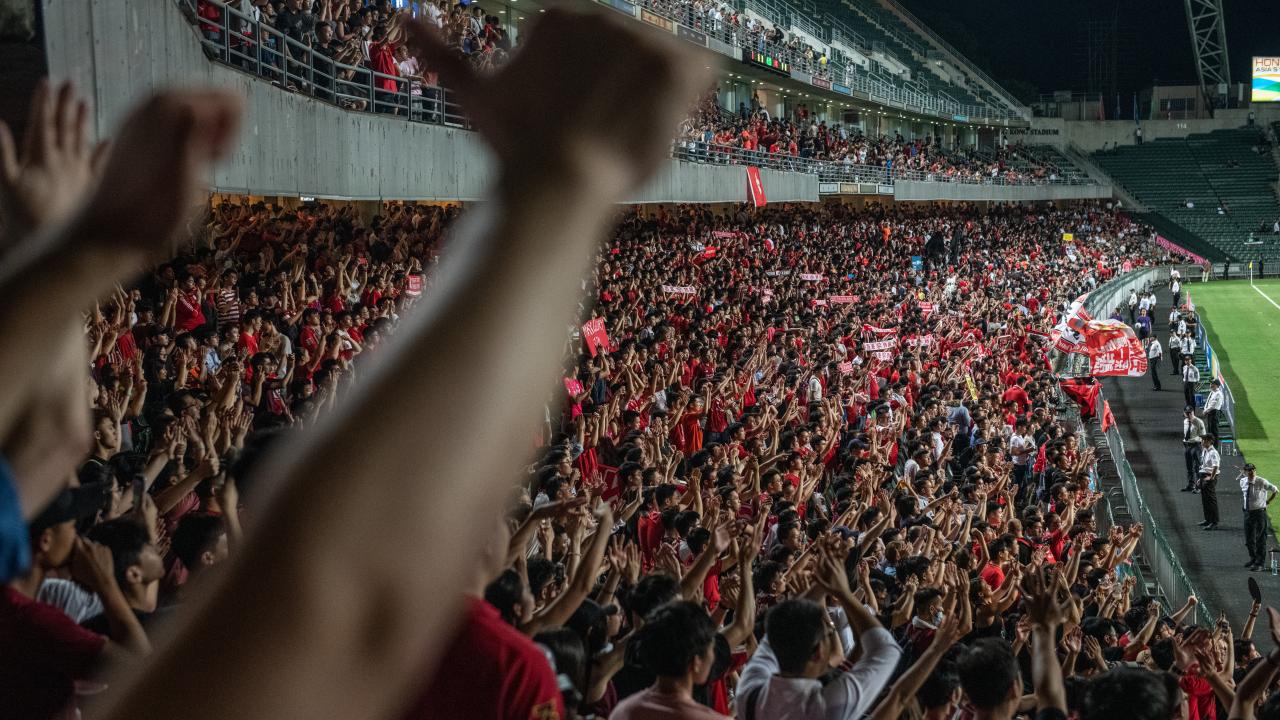 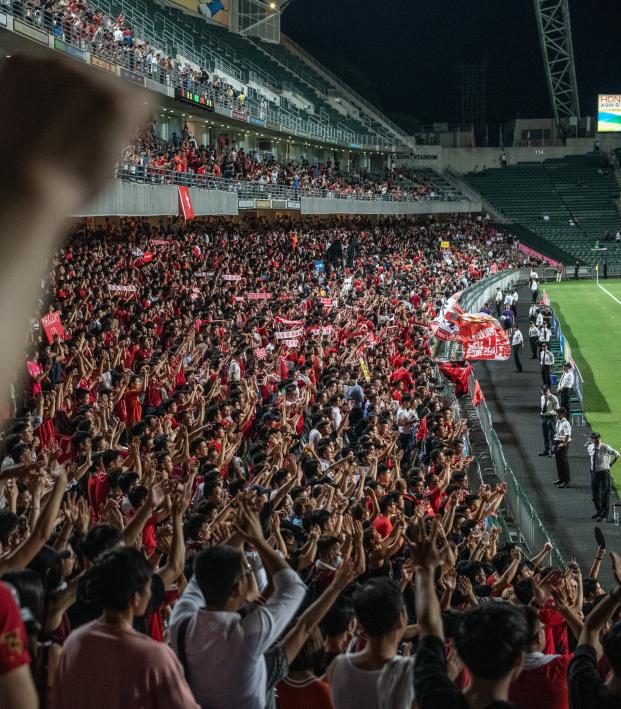 When the Hong Kong national team hosted Iran in a World Cup qualifier in September, fans of the home side showed support for Iranian women, who are still fighting for the right to attend soccer matches in their home country. Even amidst the region’s turmoil and unrest with massive protests staged against the Chinese government, the fans found room to empathize with their opponents.

Proving no good deed goes unpunished in the eyes of FIFA, world soccer’s governing body handed the Hong Kong soccer federation with a $15,100 fine for disrespecting the Chinese national anthem during that Sept. 10 match.

Hong Kong fans turned their backs, booed and whistled during the Chinese national anthem played before the World Cup qualifier, which Iran won 2-0. FIFA thus charged Hong Kong with “disturbance during national anthems; use of objects to transmit a message that is not appropriate for a sports event.”

Although Hong Kong competes in FIFA as its own national team, as a special administrative region of China, the Chinese national anthem is played before its international matches. That Hong Kong national team supporters protested the Chinese national anthem is no less surprising than FIFA’s decision to punish the federation, but it’s just another example of a major organization kowtowing to the demands of China in regard to Beijing’s oppression of Hong Kong.

FIFA has rules against political displays at matches, and it appears to have deemed this a political message.

But it didn’t have to.

FIFA could have deemed these actions to be messages of human rights such as anti-racism and anti-discrimination statements, which it allows, and let the actions slide. (MLS recently acquiesced to fans to allow anti-fascist imagery to be displayed, deciding it was apolitical.) Instead FIFA joined the NBA and videogame giant Blizzard in siding with China. 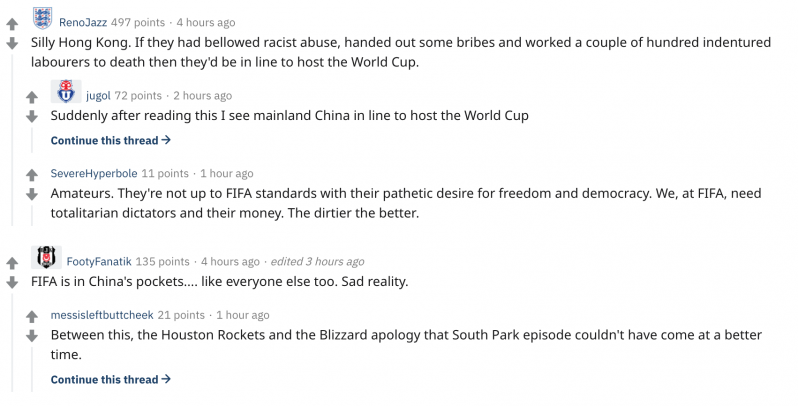 Hong Kong has every reason to protest the Chinese government, as its citizens have been doing for months now. The protests, some of which have drawn nearly two million into the streets, began to fight an extradition bill but have continued in earnest even after the bill was shelved. A good summary of the Hong Kong protests can be found here, and it’s really worth reading the whole thing, more so than this article you’re currently reading, if I may be so bold.

For better or worse, Hong Kong protests are achieving the goal of international cognizance in the world of sports this week, from FIFA to eSports.

Before FIFA’s fine, the NBA became embroiled in controversy surrounding Hong Kong when Houston Rockets general manager Daryl Morey tweeted a show of support to Hong Kong pro-democracy protests. He quickly deleted the tweet and apologized, and the NBA initially chastised him and apologized profusely to China. The NBA makes a ton of money from China, which has long been a huge supporter of the Rockets since the playing days of Yao Ming (now the head of the Chinese Basketball association). Chinese companies, including the state-run China Central Television, which broadcasts many NBA games, immediately began pulling out of deals with the NBA and the Rockets.

NBA commissioner Adam Silver eventually backed Morey’s right to freedom of expression in another league apology, which prompted this statement from CCTV.

Clearly China and the U.S. have different views on freedom of speech.

After initially throwing Morey under the bus, the NBA stood by the Rockets GM but still tried to do everything it could to appease China beyond limiting the free speech of NBA players and staff. Unfortunately, China highlighted the reasons Hong Kong continues its protests when a Rockets fan used the Chinese social media site Weibo to show support for his team over his country. He was almost immediately detained in the middle of the night.

Houston Rockets fan in China posted photo on Weibo wearing a James Harden jersey while holding a up Chinese flag and a lighter, with the caption: “I live and die with my team. Come and catch me.”

There was another controversy that may have been even worse in the world of eSports this week.

A professional Hearthstone player (a collectible card game developed by World of Warcraft creator Blizzard) wore a mask and said “Liberate Hong Kong; revolution of our age” in solidarity with Hong Kong protests during a live postgame interview stream. The player, Chung “Blitzchung” Ng Wai, is from Hong Kong.

Blizzard immediately banned Blitzchung for a year and withheld all prize money under some loosely worded rules for Hearthstone’s Grandmasters competition. The rule bans “engaging in any act that, in Blizzard’s sole discretion, brings you into public disrepute, offends a portion or group of the public or otherwise damages Blizzard image.”

Blizzard also cut ties with the two broadcasters conducting the interview, despite their obvious discomfort from the political statements (you can see them actually duck their heads below their monitors to avoid it).

This was an even more egregious example of a company bowing to Beijing. Blizzard makes a decent chunk of money from China. Activision Blizzard brought in $173 million from the Asia Pacific region in the second quarter of 2019, about 12 percent of its worldwide revenues, the New York Times reported. China accounted for $225 million in revenue for the World of Warcraft movie, nearly double its budget, which flopped in America.

Blizzard banning Blitzchung led many to boycott the company, even people who worked for Blizzard.

Both the NBA and Blizzard incidents drew comments from American politicians. The Daryl Morey tweet even got Beto O’Rourke and Ted Cruz to actually agree on something for once. Adding fuel to the fire, “South Park” recently aired an episode calling out American businesses compromising values to gain an edge in the Chinese markets. (It is interesting how the international community speaks out against the Chinese government oppressing Hong Kong but often turns a blind eye to the government’s use of torture, mass detention and forced disappearances in mainland China.)

We shouldn’t be surprised FIFA is siding with China instead of letting the Hong Kong national team slide as its fans fight for human rights. After all, FIFA is still allowing Qatar to host the damn World Cup.

But that doesn’t mean we should be fine with it.