Travis Yoesting February 25, 2020
The Bayern Munich left back had a brilliant match in a 3-0 rout of Chelsea.

Bayern Munich left back Alphonso Davies had himself a little battle with his opposite No. 19, Chelsea’s Mason Mount, on Tuesday. Well, he had a battle in the same way a child with a magnifying glass has a battle with ants on a sidewalk.

Davies toyed with the young Blues midfielder throughout the match, using his immense pace to recover on a couple occasions when it appeared Mount was in on goal. Then the Canadian teenager blistered past Mount and the entire Chelsea defense for the back-breaking goal in a 3-0 win in the Champions League Round of 16 at Stamford Bridge on Tuesday.

Serge Gnabry, back in London, torched a former Arsenal rival once again, scoring two goals for Bayern Munich after having netted four in a win over Spurs in the UCL group stage in the fall. His efforts helped give the German giants a fairly comfortable advantage heading into the second leg at Allianz Arena on March 18.

But Gnabry might not have had the opportunity to win the match for Bayern had it not been for Davies.

The Canadian striker/winger/wingback/fullback made it apparent early on that Mount would have no luck getting in behind Davies, even if given a huge head start.

Alphonso Davies chased down Mason Mount like it was nothing  @FCBayernUS pic.twitter.com/GnTdkm7ZQw

Davies had a similar recovery run later in the first half, but the play was called back for offside, because even with an illegal head start Davies still caught up to Mount, who himself was guilty of an undetected stomp on Davies early in the match. 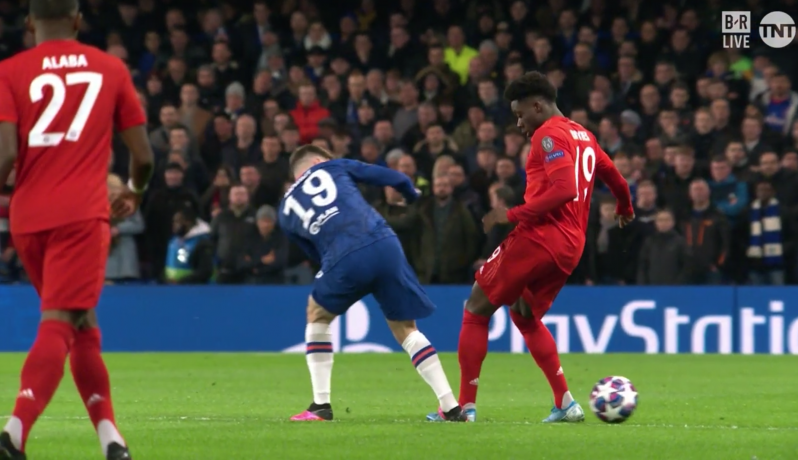 But Davies’ most notable contribution came in the second half, with Bayern already leading 2-0.

The left back went on a rampaging run down the left wing, going through, around or past four defenders before laying off a perfect pass to Robert Lewandowski, who was never going to miss.

Davies looks pretty good for a former MLS player, if we do say so ourselves.

The goal allowed Lewandowski to retake the Champions League scoring lead for this season over Erling Håland with 11. The Polish No. 9 has 39 goals in 33 appearances this season, which is simply absurd.

The other two goals were all about Gnabry (with assists from Lewa).

Serge Gnabry left London in 2016. At the age of 21, he hadn’t been given enough first-team opportunities to show he deserved a full-time spot on the Arsenal roster, so he moved on first to Werder Bremen and then Bayern Munich.

Back in London this season with Bayern, the German winger can’t stop scoring against his former rival clubs.

After scoring four in a 7-2 romp over Tottenham in October, Gnabry netted twice more at Stamford Bridge.

Gnabry has now scored more goals in three games against London competition (six) than Arsenal has in three matches against Spurs and Chelsea (five).

Both goals came off well-worked one-twos with Lewandowksi, scoring in the 51st and 54th minutes.

Bayern could’ve won by more had the referee (or VAR) not ignored an obvious hand ball in the box by Andreas Christensen.

But VAR was watching when Marcos Alonso decided to take out some frustration on Lewandowski’s face.

Chelsea’s left wingback, no Davies, was sent off for the offense, so he’ll miss the return leg in Munich in a couple weeks. Based on Tuesday’s result, it could be a long night in Bavaria for the Blues.

Hopefully Christian Pulisic is back and healthy by then.