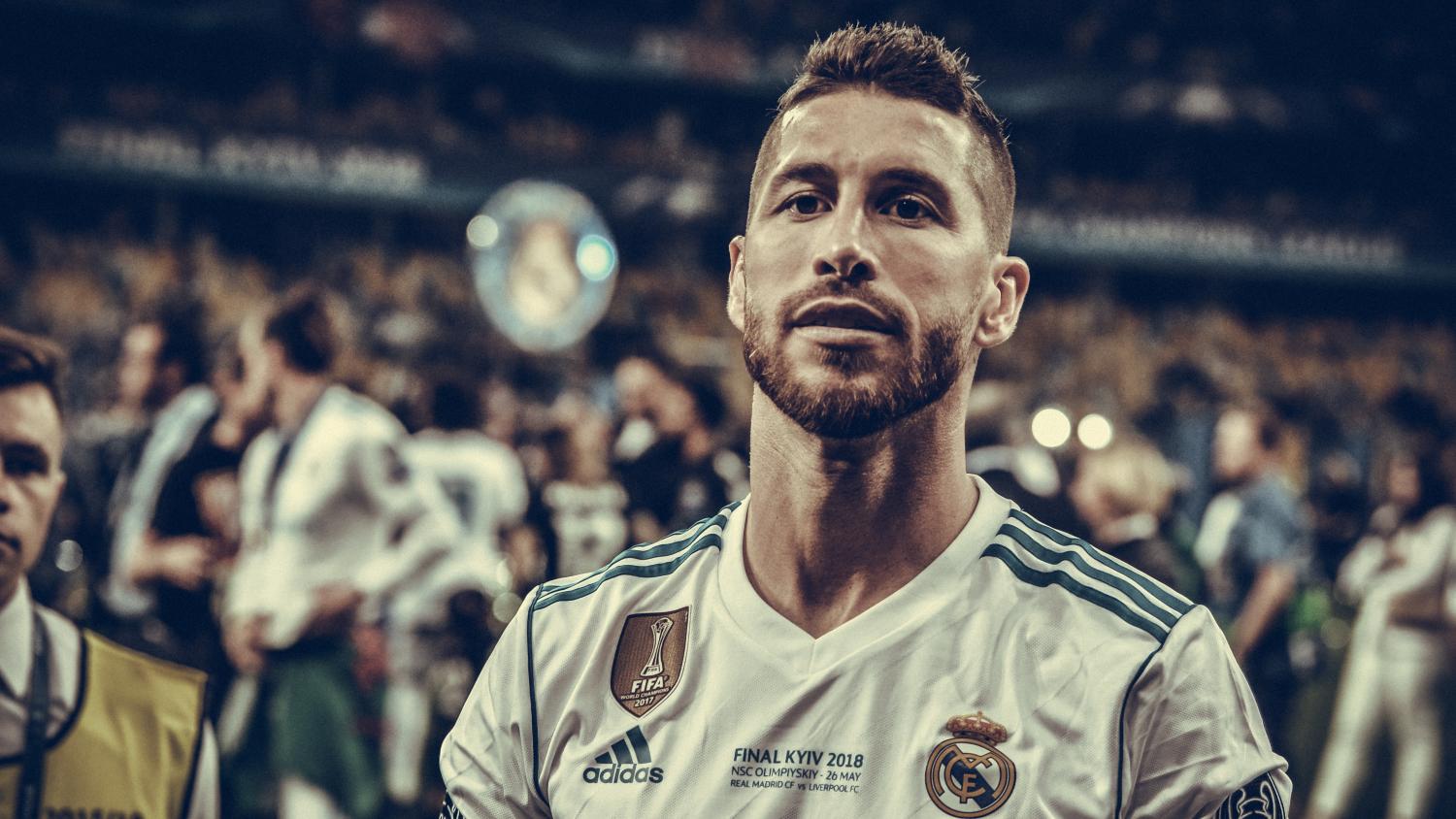 Sergio Ramos Garcia harvested himself from a little, unknown seed playing for Sevilla to an unearthly spectacle at Real Madrid. He is the captain of both Spain’s national team and Los Blancos. He is the hero of some and the villain of many — he also holds an insane record of red cards.

Hate him or love him, applaud or hiss, Ramos is undeniably a household name in our beautiful game. To understand that, we need to live in his shoes and simultaneously glare at him from a distance. We need a rundown of the history of Ramos red cards.

To set this empathetic mood of diving into Ramos’ mind, let us contemplate on what could be written on his gravestone once he rejoins the gods of football. To many, such as his Mohamed Salah or Loris Karius, his gravestone might read “winter is dead.”

To those who both admire and detest him, my finger’s pointing at Ronaldo, they may use this poem instead:

But bad guys do.

People remain conflicted on Ramos’ tackle against Salah during the Champions League final between Madrid and Liverpool. Was it a clean and effective tackle — or a red-card-deserving Judo flip?

Before a Ramos red card history lesson, we also need to address his stats with Real Madrid and Spain. Specifically, the 31-year-old's silverware and disciplinary record.

Ramos’ personal accolades aren’t to be messed with either. He’s been voted LaLiga’s best defender four years in a row from 2011 to 2015, a FIFA Club World Cup Golden Ball recipient and top scorer in 2014, and was named part of FIFPro World XI eight times.

Real Madrid’s No. 4 also has the second highest caps for Spain at over 100 all the while representing his nation at four World Cups.

As for the walking wrecking ball’s disciplinary record, Ramos has more cards (red and yellow) than any player in the history of LaLiga, the Champions League and Spain’s national team — a combined collection of 274 cards throughout a 15-year career.

Diario AS reports Ramos to receive a booking on an average of every 2.3 matches. Leading the cardholders club in all of Europe’s major leagues, Ramos has collected 171 cards with LaLiga, 36 cards in the Champions League and 20 cards playing for Spain.

That’s 34 percent of all Pokémon and 123 more cards than the original little buggers. Note to self: make a RamosGo app, make millions and finally live like Ramos.

During a LaLiga match on Sept. 18, 2005, Ramos began his journey into catching them all. In the 61st minute, Ramos received a yellow card only to be followed by another one in the 87th minute. The sending off was especially entertaining to Real Madrid’s foes as the game was played at the Olympic Stadium in Barcelona. And the first domino falls down …

On Sept. 29, 2005, not 10 days after his first red, Ramos was sent off in this Champions League match. An altercation with Giannakis Okass of Olympiakos had Ramos relieved from the pitch in the 91st minute. Luckily for the Whites, Roberto Soldado had just scored the winning second goal for Madrid.

Having taken October as a break from red cards, Ramos received his third in this November 2005 LaLiga match. To be fair though, both Madrid and Sociedad were playing with 10-man teams.

Ramos has certainly perfected his trade over the years:

More BS from the Madridiot!

Klopp on Ramos’ tackle on Salah: “If you’re not a Madridista and see it again, it was ruthless and brutal. If you put together all of Ramos’ actions, and I’ve been watching football since I was 5, you’ll see that a lot of things happen with him.” pic.twitter.com/580EB5grf5

During this LaLiga match in May 2006, Ramos’ misbehavior was doubly damaging for Madrid. This match was Zinedine Zidane’s final club game. Ramos received a red card for a handball in Madrid’s box, giving Diego Forlan an easy penalty goal, but Julio Baptista equalized later. Zidane went on to receive his infamous red card during that year’s World Cup.

This LaLiga Madrid derby in October 2006 was Ramos’ first. Despite the Whites having Roberto Carlos and Fabio Cannavaro on the defensive line, Ramos paid no attention to their card-avoiding expertise. He was sent off with a red after his usual two yellow cards.

Battling his former club in a LaLiga match in November 2007, Ramos managed a yellow card twice. His first yellow was five minutes before halftime and his second yellow, turned red in this case, came five minutes after halftime. If you’re going to be sent off, might as well be consistent with it, right?

This LaLiga matchup in March 2008 had a staggering three red cards. Ramos joined the triumvirate of sent-off players in the 55th minute after an elbow on Florent Sinama-Pongolle, a former Liverpool striker. Oh, how history repeats itself.

Liverpool signed Florent when he was 16 and the Frenchman now plays for Thailand’s Chainat Hornbill FC.

Also a bit of a guilty pleasure pic.twitter.com/pyAsLeTKkn

In this April 2008, LaLiga match, Ramos was caught with two misdemeanor offenses. The first being a handball in the 46th minute; the second was a flop. Ramos went night-night after that but Madrid did win LaLiga that year.

This well-deserved red card in a LaLiga match during November 2008 turned many against Ramos. The relentless defender was caught stepping on the chest of Portuguese striker Eliseu while he was on the ground.

During November 2009 in a LaLiga derby, Ramos received a red card after a brutal challenge on Sergio Aguero. Don’t worry, dearest reader, we’re not even half way yet.

Ramos was caught wasting time twice in this November 23, 2010, Champions League match. He was caught throwing the ball away in the first half followed by more lollygagging in the second half’s injury time. The typical two yellows magically turning into a red wasn’t a trick that shocked anyone at this point.

This November 29, 2010, El Clasico in LaLiga was a moment to remember. Six days after his red card against Ajax, Ramos was sent off after two yellow cards as the Catalans thrashed the Whites. The first yellow was a 20th-minute tackle on David Villa followed by a slash on Leo Messi in injury time.

Messi fans didn’t take long before turning his video with the massive mastiff into a Ramos meme. Twitter can be cruel sometimes; clearly the dog’s defense is more ethical than Ramos’.

Messi doing pre-season training with Ramos. Nice to see rivalries put aside for a while. pic.twitter.com/3tnsLIPk2F

In January 2012, Ramos was sent off after another two yellows in this Copa del Rey game. One was for protesting a free kick and the other was for shockingly elbowing his compatriot Sergio Busquets. Nothing says friendly countrymen like a good elbow every now and then.

This March 2012 LaLiga match was Ramos’ 300th appearance for the Whites, so we know he had to make it special. He broke the record for the most sent-off Madrid player after elbowing Nilmar. Mesut Ozil also received a red during this match.

Ramos was kicked out from this January 2013 Copa del Rey match after two yellow cards, again. Ramos saw the first yellow flash after an altercation with Celta players and the second flash after kicking Augusto Fernandez in the chest. Unfortunately, he did not shout "this is Sparta" before the kick.

A month later in February 2013, during a LaLiga match, Ramos was caught tugging Robert Trashorras shirt before getting caught on a deliberate handball. At least he scored in this match, though.

This Champions League clash in November 2013 earned Ramos a straight red after a mean tackle on Umut Bulut.

I don’t know about you but I’d pay to see Iker Casillas punch anyone in the face:

Iker Casillas punches Sergio Ramos in the face after he injured him in the game against Galatasaray #UCL pic.twitter.com/wp68HAFvoQ

During this December 2013 LaLiga match, Ramos’s first yellow was after contesting a tackle against Alvaro Cejudo. His second was for swinging his forearm at another Osasuna player’s face. And another red goes into the collection.

This El Clasico was catastrophic. During a March 2014 LaLiga match, Ramos plunged into Neymar, giving Barcelona a penalty goal all while getting sent off. Messi scored a hat trick, which added more insult to injury for the Whites.

It had been two years with no Ramos red cards. The itching is stronger than ever and the fever refuses to cool down — he needs a fix, quick!

Well, he got it in this March 2016 LaLiga match. Ramos received a yellow earlier in the game and once that rush kicks in, man, you only want more. He tackled Las Palmas’ Momo late in the game for his 20th red card.

Returning from suspension to face archrival Barcelona in an April 2016 LaLiga game, Ramos was eager and ready for action. Ramos got his second yellow after tackling Luis Suarez. Ronaldo scoring the winning goal to end Barcelona’s 39-game undefeated streak.

A year after their last match and the last Ramos red card, the Spaniard thirsted for another comeback. In this April 2017 LaLiga match, the Madridista defender had his eyes set on Messi the whole game through. Ramos finally struck the Argentinian, earning his 22nd red card.

Bugger just laughs it off anyway:

Sergio Ramos is shown a red card for the 5th time in 34 #ElClasico appearances. pic.twitter.com/6bSLGnJYxw

In this August 2017 LaLiga match, Ramos got close and personal with Fabian Schar. He received his first yellow for his overly aggressive antics followed by a second yellow when elbowing Borja Valle.

In December 2017 during a LaLiga game, Ramos returned after three matches missed for a broken nose. Ramos received his first yellow for a forearm smack on Raul Garcia followed by a second yellow when aggressively handling Artiz Aduriz. In honor of his broken nose, Ramos decided to break LaLiga’s record as the league’s most dismissed player with 19 red cards.

If you’re wondering about any moral to this 24-red-card story, wonder no more. It’s simple, really, as we learn only three things in life are certain: