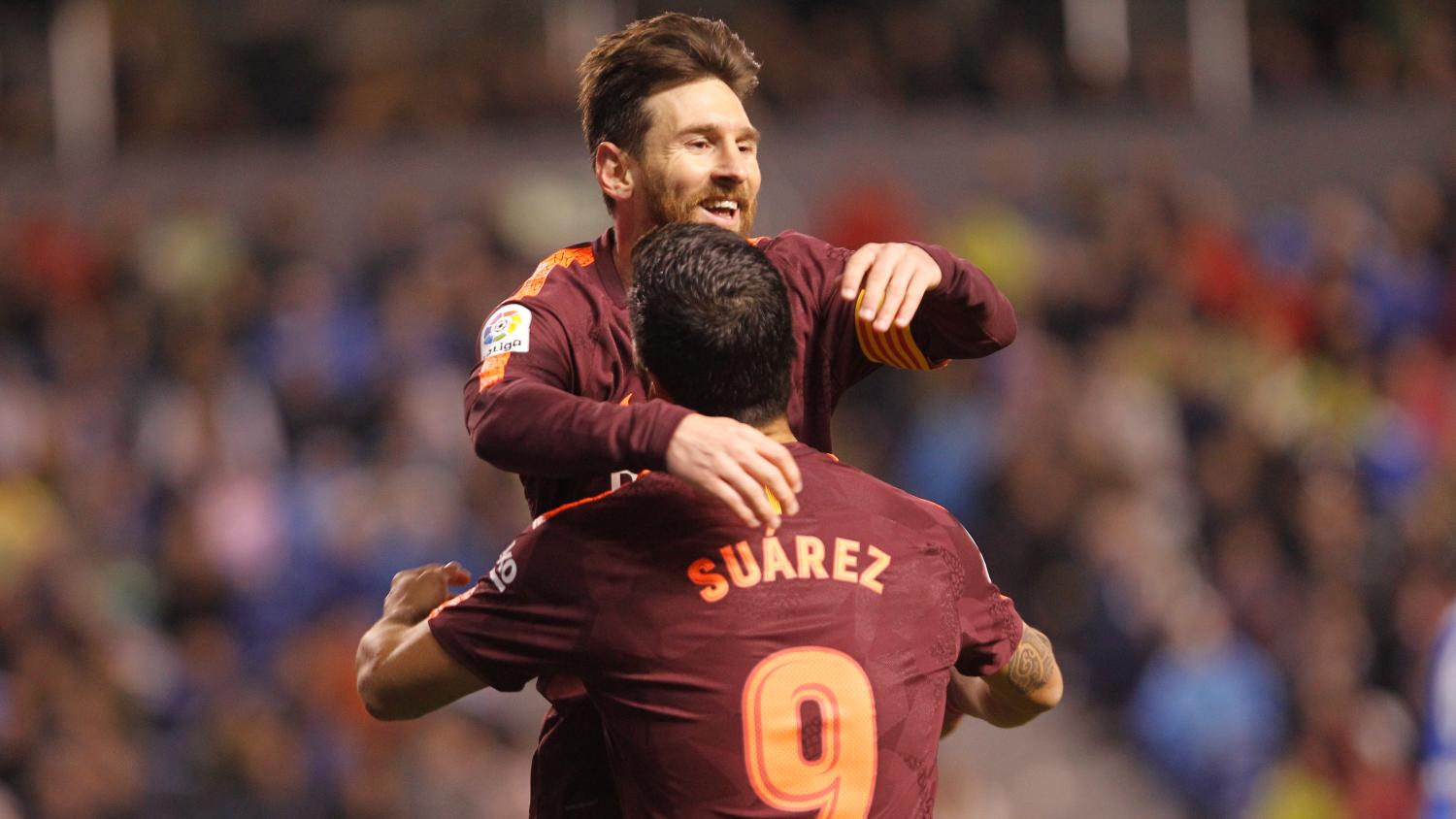 Finally, Lionel Messi and Cristiano Ronaldo can both win Golden Boots in the same season.
Shutterstock.com

Let’s be honest here. Last year’s major European league title races were, for the most part, downright boring. The Golden Boot races? Well, those were a little more entertaining. While most of the European league races are likely to once again go to obvious winners, the Golden Boot odds in each league suggest those races will be the ones to watch in the upcoming season.

Last year a number of the Golden Boot races across Europe came down to the wire; we even had a tie in Italy for the Capocannoniere. In contrast, only Serie A had title race that ever seemed in doubt, though the Scudetto again went to Juventus for the seventh straight time.

Here’s a rundown of Golden Boot odds and predictions for each of Europe’s top five leagues — plus a bonus prediction for the Champions League.

Let’s start with England because that’s the league that starts first and is likely to have one of the most entertaining Golden Boot races. First, a look at the odds. 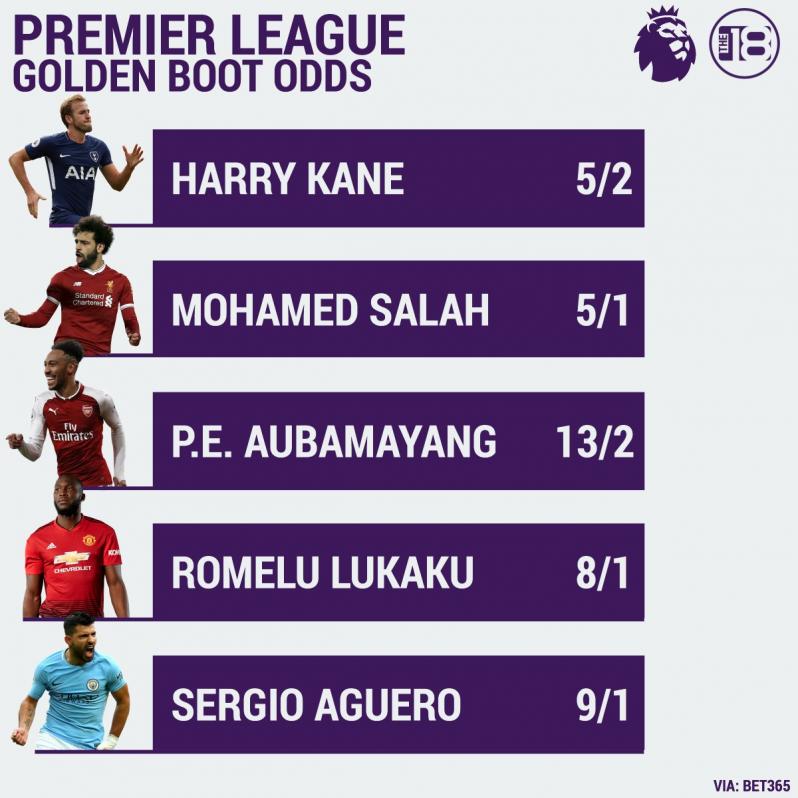 Harry Kane is the favorite despite losing out to Mohamed Salah last year 32-30 — even after begging for a questionable goal. Both are likely to be in competition yet again as the next highest scorer last season was Sergio Agüero with 21.

Agüero, if healthy for a full season, is a good choice to win the Premier League Golden Boot, as he did in 2015 with 26 goals in 33 matches. Last year he scored 21 goals in 25 matches for Manchester City.

I’d suggest not putting money on Manchester United’s Romelu Lukaku. The Big Belgian scored 16 goals in 34 appearances during his first season in Manchester. His career high is 25 with Everton, but he’s unlikely to replicate that playing for Jose Mourinho, who seems more interested in complaining than playing attacking football.

The man to watch out for is Pierre-Emerick Aubameyang. The 2017 Bundesliga Golden Boot winner arrived at Arsenal in January of 2018 and scored 10 goals in 13 matches. Extrapolated over a full season, that’s 29 goals. Add in the fact he’s likely to only get more comfortable with his teammates, and it’s feasible for the Gabon striker surpass 30 goals. However, despite his budding bromance with Alexandre Lacazette, Aubameyang is likely to share starts and goals with the French forward, perhaps limiting his goals more than Kane or Salah.

The Premier League Golden Boot odds suggest it will go to someone who has won it before. In 25 years, a multi-time winner has won the Golden Boot 17 times. And with Liverpool only getting stronger in midfield, don’t be surprised when Mohamed Salah scores 30-plus goals once again.

The Pichichi, Spain’s Golden Boot, is one of the more prestigious Golden Boot honors in the world. The last 10 Pichichi winners also won Europe’s Golden Shoe.

These are the LaLiga Golden Boot odds for the upcoming season. 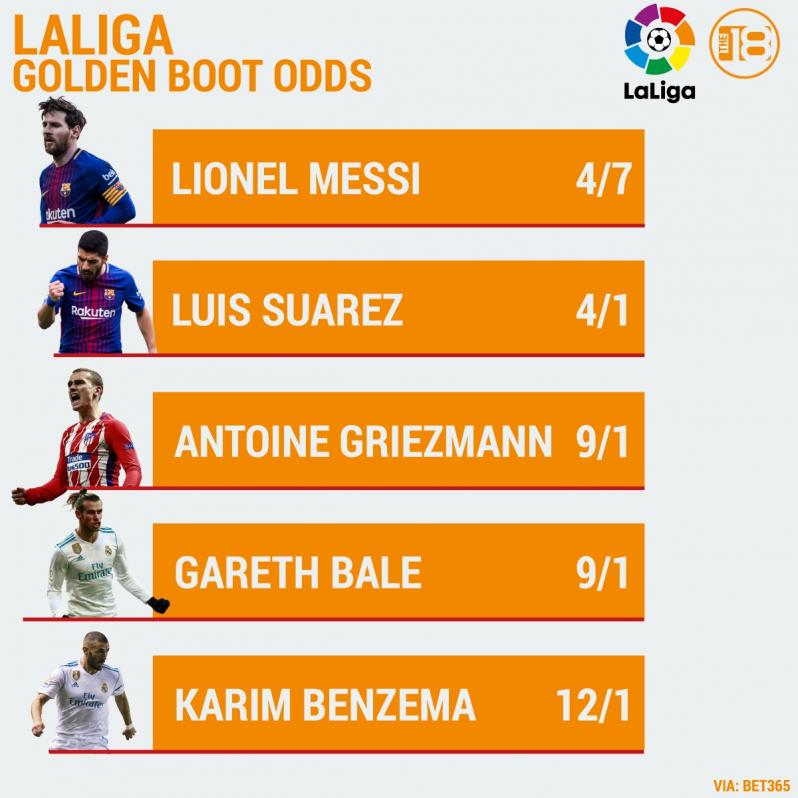 With Cristiano Ronaldo having moved to Juventus, Lionel Messi is the clear favorite for the Pichichi this season. His only real competition, according to the Golden Boot odds, is Barcelona teammate Luis Suarez.

Messi also won the last two Pichichis. His total of 34 goals from 36 matches was the first time since he won the honor in 2010 that LaLiga’s top scorer failed to notch more than a goal per match.

With Suarez seemingly in decline at Barça, Messi is likely to lead the Catalans in scoring once again. Antoine Griezmann scored 19 last year but is likely to see that number dip with Diego Costa playing a full season with Atlético Madrid while Karim Benzema has never scored more than 24 goals in a season.

The only player who might challenge Messi for LaLiga’s top scorer is Gareth Bale. The Real Madrid winger scored 16 goals last season playing second fiddle to Ronaldo. Now likely to be the star man for Los Blancos, expect his goal total to improve, at least closer to his best performance in Spain of 19 goals in 23 appearances. Assuming he can stay healthy, don’t be surprised to see Bale reach 30 goals — but even that might not be enough to catch Messi.

Messi has had his best seasons directly after World Cup disappointments. After the 2010 tournament, he scored 31 league goals (73 in all competitions). After the 2014 World Cup, he tallied 43 goals in LaLiga. Expect another massive number from the Argentine this upcoming season.

The Bundesliga Golden Boot might be the easiest one to predict — but that could all change in a flash. 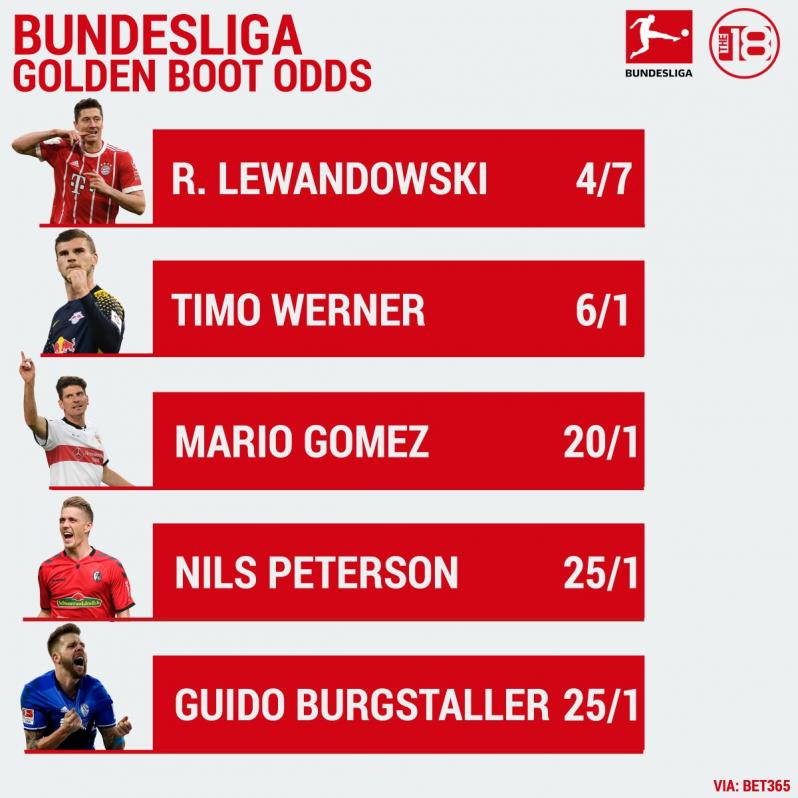 Bayern Munich’s Robert Lewandowski is far and away the heaviest favorite in all the top leagues, with few real challengers. The Polish striker has won three of the last five Golden Boots, one of which came with Borussia Dortmund.

The Bundesliga Golden Boot odds suggest RB Leipzig’s Timo Werner is the only player with a real chance to challenge Lewandowski. The German striker scored 13 goals last year, a dip in form from the 21 he scored the season prior. But no one who saw Werner’s performance at this summer’s World Cup would be inclined to believe he will be able to replicate his 2016-17 form.

The American in me wants to suggest Christian Pulisic could go nuts and score 30 goals, but that’s just dumb.

In reality, only Bayern Munich can prevent Lewandowski from a fourth Golden Boot. Bayern Munich has said it is intent on keeping Lewandowski despite links to a move to a club like Real Madrid. But that could all change in a flash if the right offer is made.

The Serie A Golden Boot has been harder to predict than any other major European league in recent years. The last time the league had a repeat winner came in 2011 when Antonio Di Natale won it for the second straight year. Since then, there have been two ties for the Capocannoniere (which means “head gunner” in English).

Here are the Serie A Golden Boot odds: 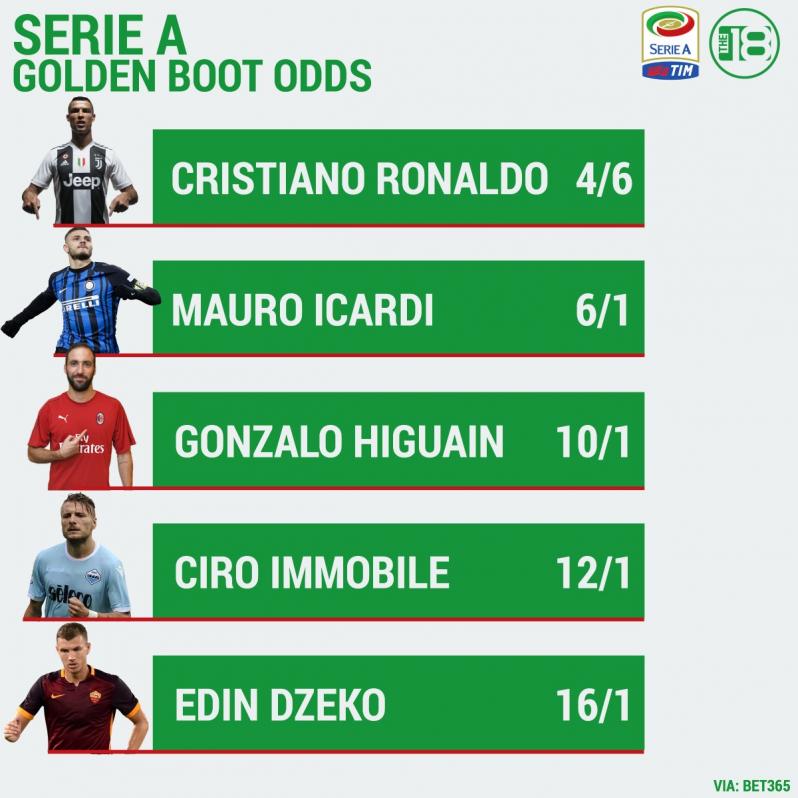 He’s yet to play a game with Juventus, but Cristiano Ronaldo is an obvious favorite to win the Capocannoniere. The former Real Madrid and Manchester United Golden Boot winner scored 26 goals in 27 matches in LaLiga last year and has scored at least 40 total goals in each of the last eight seasons.

The biggest mark against Ronaldo is whether or not he’ll play enough matches to score enough goals. Last season he was rested for nearly a quarter of Real Madrid’s league games. And with Juventus likely to be more focused on the Champions League than Serie A, Ronaldo may see his chances limited in Italy.

Last season Inter Milan’s Mauro Icardi and Lazio’s Ciro Immobile shared the Golden Boot honors with 29 goals apiece. It was Immobile’s second Capocannoniere after winning it with 22 goals for Torino in 2014.

The Golden Boot odds aren’t as favorable for Immobile as they are for Icardi. But the last two Capocannoniere winners before them are more likely to challenge Ronaldo this season. Roma’s Edin Džeko won the Golden Boot in 2017 with 29 goals and despite a dip in form last season (16 goals) he has the surrounding talent to surpass 20 again. Then there’s Gonzalo Higuaín, who won the Capocannoniere with Napoli in 2016, moved to Juventus and scored 24 and 16 goals and is now at AC Milan where he’ll again be the primary source of goals.

But if Ronaldo gets the playing time he needs, it’s hard to see anyone stopping him from winning his first Capocannoniere.

One thing is for sure when it comes to the Ligue 1 Golden Boot: It’s going to be won by a Paris Saint-Germain player. Six of the last seven Ligue 1 top scorers have been from PSG, with only Lyon’s Alexandre Lacazette breaking that streak in 2015. 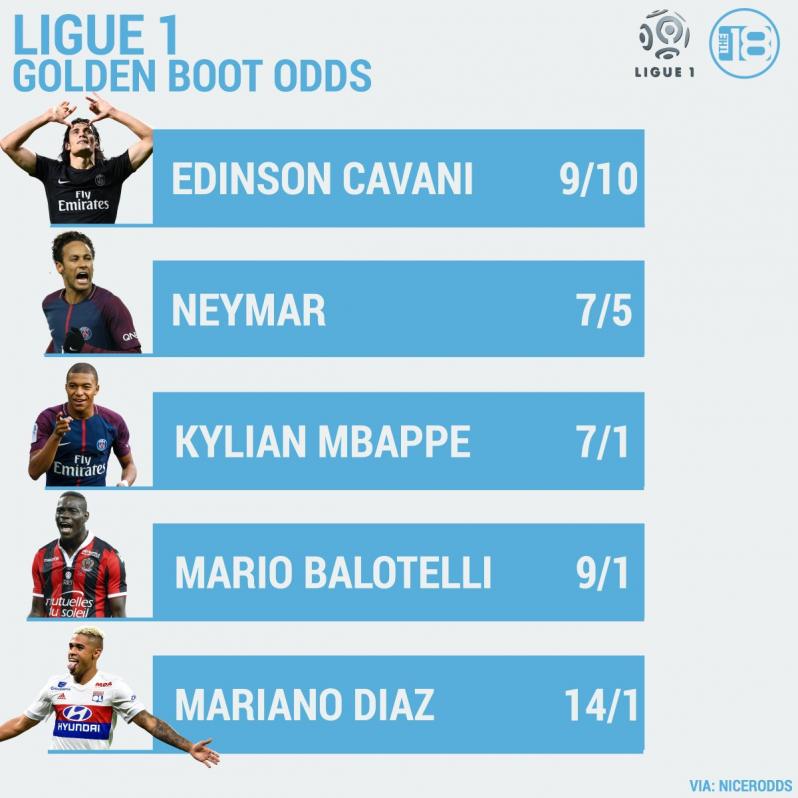 The top three most likely Golden Boot winners all play for PSG, so we're not even going to consider Mario Balotelli and Mariano Diaz.

Edinson Cavani has won the last two with 35 and 28 goals while Neymar finished third last season with 19 in 20 matches after missing much of the spring with injury. Then there’s Kylian Mbappé, who lit up the World Cup and is only getting better at age 19. So who scores most for PSG?

Uruguayan striker Cavani is the man who plays most centrally for PSG, unless Tim Weah somehow takes his starting job. But Neymar has freedom to roam and an unmistakable eye for goal. Of the three, Mbappé has the most speed, but it might be difficult for him to show off that speed in Ligue 1, where defenses will sit back as deep as possible against PSG’s attacking prowess.

PSG scored 108 goals last season so there are plenty of goals to go around. That said, if Neymar stays healthy, expect an absurd number of goals as the Brazilian looks to atone for a poor World Cup performance.

As a bonus, we’re going to look at the Champions League Golden Boot winner.

The Champions League’s top scorer is almost always a player who advances deep into the tournament. For the last six years, that’s been Cristiano Ronaldo, as Real Madrid has dominated the competition with four titles. He’s likely to go deep again with Juventus this season.

So who has a chance to unseat Ronaldo? The last two other men to win the UCL Golden Boot or someone from Liverpool.

In 2014-15, both Lionel Messi and Neymar tied Ronaldo with 10 goals to top the Champions League scoring. Both Messi and Neymar could easily make deep runs in the tournament and score plenty of goals along the way, as both are predicted to win the Golden Boots in their respective leagues.

But don’t sleep on Liverpool’s Mo Salah. The Premier League Golden Boot winner finished with 10 UCL goals last season, tied for second with teammates Roberto Firmino and Sadio Mané. If Jurgen Klopp can get his team back in position to win the Champions League, it will likely be with Salah scoring double-digit goals once again, as the Reds rack up plenty of goals.