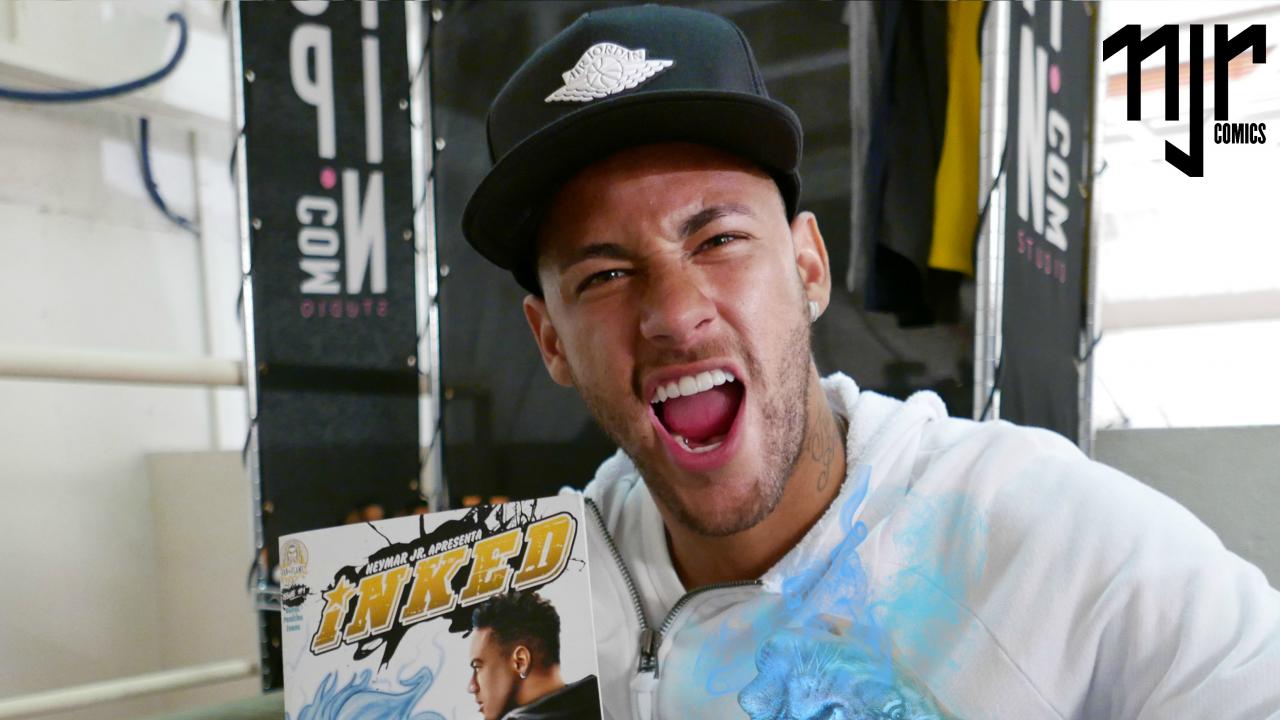 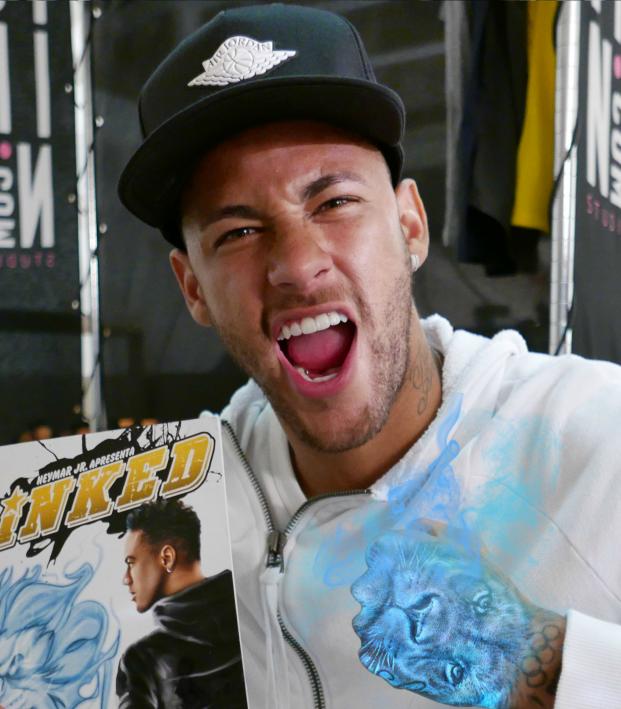 His tattoos sit on the surface, superficial representations of the inner thoughts of a man praised and vilified in near equal measure.

For the outside world, the tattoos are the only insight into the mind of someone who has reached the pinnacle of his craft by the age of 26.

For the world of “Inked,” they are so much more.

Neymar Jr. is one of the top soccer players in the world, a Brazilian whose name can be whispered alongside modern-day legends such as Lionel Messi and Cristiano Ronaldo and heroes of decades past like Romário, Ronaldo and Pelé.

Covered from head to toe in tattoos, Neymar Jr.’s body art has captured the imagination of fans around the world. From a lion on his hand to his sister on his shoulder, the prolific forward quite literally wears his heart on his sleeve for all to witness.

At least, in comic book form. 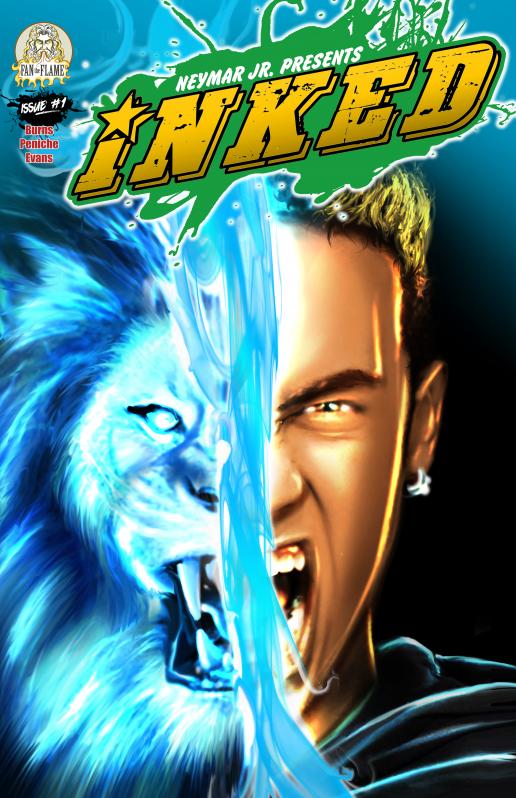 Two of the most common dreams of youngsters around the world are to become a famous athlete or, if they’re a bit more imaginative, to become a superhero.

Neymar Jr. was no different. In addition to the Romários, Rivaldos and Ronaldos that Neymar Jr. grew up idolizing was a hero of another kind: Batman.

Neymar Jr. is joining the ranks of the masked heroes, caped wonders and foul-mouthed, gun-loving raccoons through a new collaborative effort with Fan the Flame, a technology-driven comic studio responsible for translating many beloved on-screen personalities, games and celebrities into comic form.

In the new comic series “Inked,” Neymar Jr. — or rather his alter ego, Junior — gains superpowers, not through the bite of a radioactive spider or having been born into immense wealth, but by the very ink with which he is tattooed.

“Inked” is the first of at least three different series from Neymar Jr. Comics, a new digital platform created just for the Paris Saint-Germain and Brazil star. And it’s a bit of a dream come true for a man who does what he wants on the pitch and dates supermodels off it.

“I had two dreams growing up, like many kids, to be a professional footballer and a superhero,” Neymar Jr. said. “I've always been in love with comics, always liked them and getting involved with it, having my name, my face, my tattoos, the story ... I'm absolutely happy.”

When Neymar Jr. signed his contract to become the richest transfer in the history of the sport in the summer of 2017, he was wearing a Batman T-shirt. Last Halloween he dressed up as the Joker. Comics are a part of who Neymar Jr. is, just as much as the tattoos on his body.

So Neymar Jr. getting involved with comics wasn’t a question of interest — it was a matter of finding the right time, tone and platform.

Flannery has been involved in the personality side of sports marketing since well before Christian Bale became the Dark Knight. Having worked with Pelé, he’s got some clout in the industry and had a relationship with Santos FC, the Brazilian club where both Neymar Jr. and Pelé got their starts. Along with the folks at Fan the Flame, including New York Times best-selling author and the editor in chief for Neymar Jr. Comics, Jason Burns, they developed the concept for “Inked,” in which Junior, a character in Neymar Jr.’s likeness, is tattooed with mystical ink that brings the tattoos to life.

“As far as the core concept — the idea of a mystical ink that brings tattoos to life — that had been percolating in my head for years, but it wasn’t until the partnership with Neymar Jr. that it all came together from a storytelling standpoint,” Burns said. “Because of his own interest in body art, one that continues to grow as he adds new pieces, it was a seamless and natural fit for a character in Neymar Jr.’s likeness to be married to the concept itself.”

Flannery can vividly recall Neymar Jr.’s initial, excited reaction when they made the pitch to him for the comic book series with some basic cover art and story arc: “That’s cool; that’s fun.”

“We get the chance to develop fictional story arcs but we’re using real inspiration for them,” Flannery said. “I think this dimensionalizes him in a way that his global fanbase will find very interesting.”

But it wasn’t just a matter of throwing Neymar Jr. into a comic book series and making him into a superhero. While that might be enough for Neymar Jr. fanboys, Neymar Jr. Comics wants to be about more than just a famous athlete selling his image rights. It’s about gritty story telling, relating to adjacent audiences in the world of comics or tattoos and building a global community — all the while attempting to bring attention to Neymar Jr.’s charitable work with the Neymar Jr. Institute.

“As a kid who grew up with Batman as a hero, I hope that these stories and characters can inspire and entertain people around the world,” Neymar Jr. said. “The studio will be creating original content and stories that in some cases are influenced by my life and character; and in other cases stories that I’ve helped develop.”

Jason Burns, the story creator for “Inked,” knows the importance of tattoos, both in world culture and in his own life, with countless tattoos covering his body. Indeed, he makes it clear in the first lines of the comic, the free Issue No. 0.

“Inked” takes place in a gritty Brazil where cartels fight for power and tattoos come to life to do the bidding of their masters. Junior, Neymar Jr.’s alter ego, is pressed into action through tragic circumstances and becomes a reluctant hero for the powerless.

Junior’s first tattoo he learns to bring to life is Baysan, a lion tattooed on his left hand.

The tattoo is a recent one, with Brazilian tattoo artist Thieres Paim creating the skin art last October. It didn’t take long for the Neymar Jr. Comics team to bring the lion to life, making him the centerpiece of the early issues.

Thieres and Adão Rosa have combined to do most of Neymar Jr.’s tattoos, Adão himself responsible for more than two dozen. Adão, of Nautica Tattoos, has such a following that one father of a hopeful Brazilian athlete seeking stardom sought out the tattoo artist believing him to have mystical powers capable of taking the youngster to the next level — not unlike the Junior character in the comic.

Tattoos are a huge part of Neymar Jr.’s life. He’s got tattoos honoring his son, his father, his sister and his god, plus one that says “Life is a joke” to remind him not to take life too seriously and to enjoy every moment.

Art director Dustin Evans and the rest of his team at Fan the Flame have studied Neymar Jr.’s body more than opposing coaches and players to find the perfect translation onto the pages of Neymar Jr. Comics.

That said, even with the extensive number of tattoos on Neymar Jr.’s body, the creators told us they aren’t limiting themselves to tattoos Neymar Jr. currently has.

“As Junior gets deeper and deeper into the thick of things, …  he’ll realize that he doesn’t need weapons because his body actually is the weapon,” Burns said. “Think it. Tattoo it. Use it. That’s kind of the mantra he’ll fall back on because when the odds seem stacked against him, all he has to do to even those odds is imagine what tool he’d like to pull from his toolbox … his toolbox being his skin.”

While the tattoos represent the basis for the story — and a link to Neymar Jr. himself — what will allow “Inked” to thrive is the story crafted by Fan the Flame. Key to this was Neymar Jr.'s willingness to accept Burns’ comics expertise, giving him the freedom to create a world that will appeal to a widespread audience, not just fans of Neymar Jr.’s goal-scoring exploits.

Having seen advance copies of the series, The18 can say the story in "Inked" is not your typical athlete crossover like Shaq Fu. The world of “Inked” is not for the faint of heart; people get hurt and die.

Also key to drawing fans of all types into the comic is the digital platform supplied by Fan the Flame. The partnership between the comic studio and Neymar Jr. represents an innovate approach to personal brand management. In essence, Neymar Jr. Comics gives its star a unique platform to tell his own story in both a digital and traditional format while potentially expanding that universe into television, movies, merchandise and games further down the road.

In linking his own personal vision and passion with that of Fan the Flame, Neymar Jr. is connecting with fans through a comic studio with an impeccable record, including the "Pocket God" series, which at its release was the top-selling digital comic of all time

The company’s owners describe themselves not just as content creators but as technologists, who control the delivery platform through which Neymar Jr. Comics will be readily accessible.

And it'll be accessible (and affordable) to fans around the world, no matter where they live or what backgrounds they come from.

The initial issues will cost about a dollar, depending upon where you live ($0.99 in the U.S.). Other comics of this quality would typically run about $3.99 per digital issue. And to help drum up interest, Neymar Jr. Comics is releasing a number of freebie issues, such as the aforementioned Issue No. 0 and various other free shorts in the same universe, a rarity in the comics world.

Neymar Jr. Comics will also launch future series in different universes with new casts of characters. Some will be more fantastical than others, such as a post-apocalyptic world where soccer determines life or death, while one will be more biographical.

Mark Mulzet, managing partner of Fan the Flame, said Neymar Jr. Comics will have something for everyone and even if not everyone is completely sucked into the stories, given the high quality of the comics, no one will feel disappointed for having made the purchase.

Every issue will be released in at least half a dozen languages, allowing fans around the globe to join in the community. 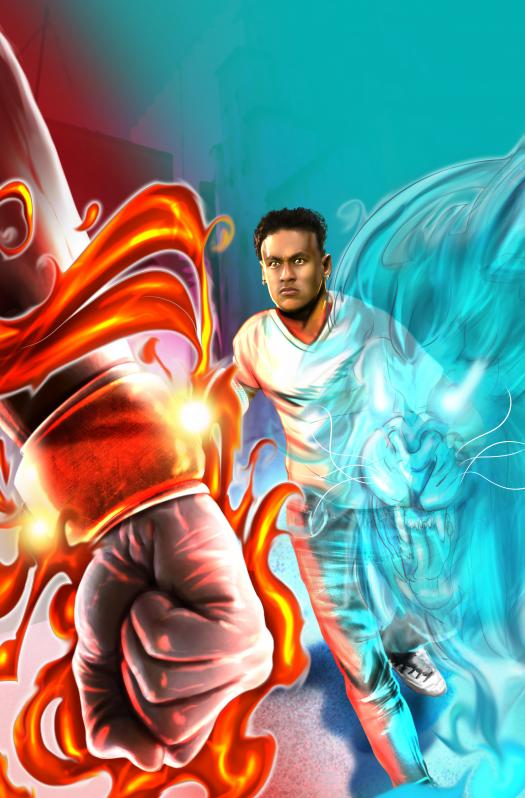 Neymar Jr. is, first and foremost, a football player.

Neymar Jr. is nowhere near finished on the pitch. Off the pitch, he’s just getting started.

Whether it will be as a superhero fighting crime in Brazil or any of the other iterations yet to come from Neymar Jr. Comics, Neymar Jr. is already a real hero to many through his charitable contributions and regular tithing.

But Neymar Jr. Comics hopes to bring the footballer to a new audience all while providing additional fan service to his already devoted followers.

“I think with any fictional work, the originality or the interest and relevance of the story is what draws people in,” said Flannery, the Neymar Jr. Comics president. “I think given his great popularity and following, people will be intrigued. This is beyond the normal arc of the hero type stories.

“However, we’ve worked really hard to develop something that is authentically linked to his life, that is important to him and will reveal and give insight into that side of his life that maybe people don’t know too much about.”