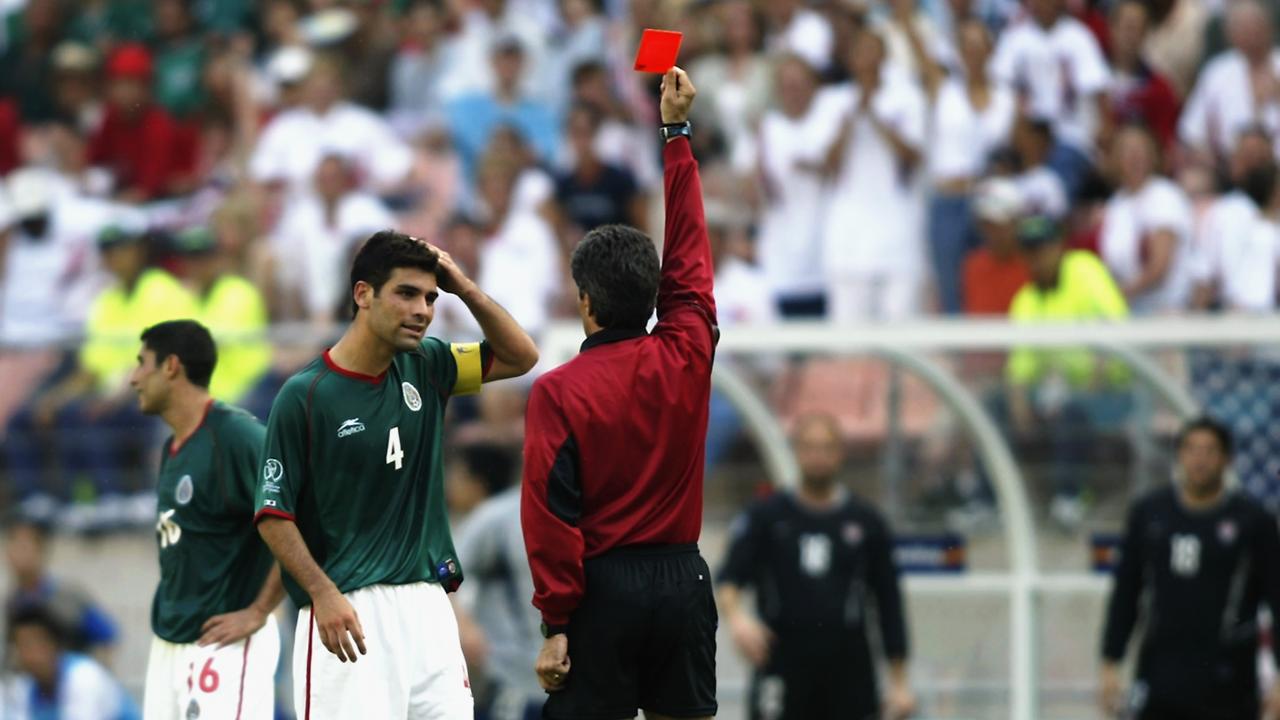 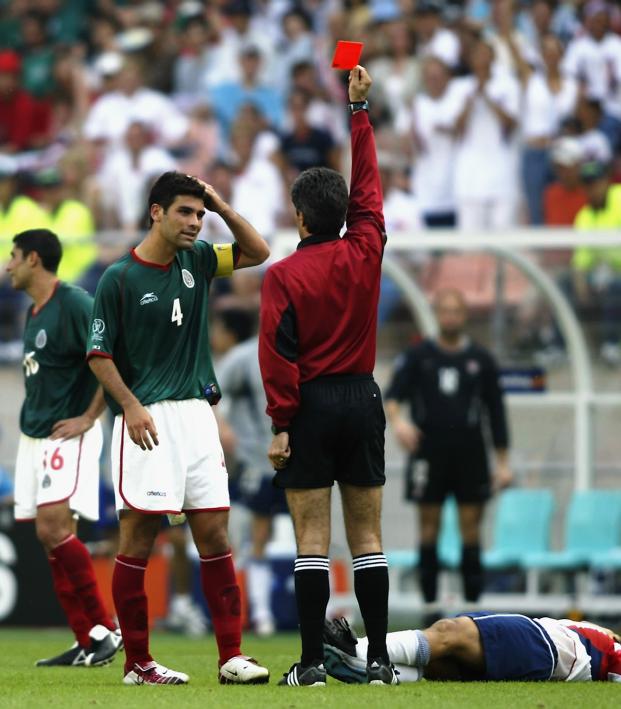 In 2011, the United States took a 2-0 lead over Mexico in the Gold Cup final. A coworker of mine at the time, who was supposed to be covering a baseball game for the newspaper we worked for, tweeted: “THIS IS THE GREATEST MOMENT OF MY LIFE!!!” This despite the fact he had, earlier that week, found out his wife had finally become pregnant after years of trying. For me, it was just another in a long line of memorable moments from the thrilling USMNT vs Mexico rivalry.

Of course, astute observers will remember what happened next: Mexico, buoyed by a pair of goals from winger Pablo Barrera, regained its composure and routed the U.S. 4-2. The aforementioned tweet was deleted, either because of the pain of the defeat or the fear his wife would see it.

There have been countless memorable USMNT vs Mexico altercations over the last couple decades illustrating the heated nature of this unique soccer rivalry. Tuesday night in Nashville, Matt Miazga and Diego Lainez added to the list with what was undoubtedly the highlight of the friendly. Miazga was fouled by Lainez, who had been terrorizing the U.S. defense all night, so Miazga did the grown-up thing and made fun of Lainez’s height.

Where does the Miazga vs. Lainez beef rank among the best USMNT vs Mexico altercations? We’ve got the list right here. Keep in mind, these are the best quarrels, not necessarily the best games, goals or highlights, of which Mexico has more (El Tri leads the all-time series 35-19-15).

It was just a friendly, but the U.S. defeated Mexico 2-0 February of 2007 in Arizona, a match that was sealed by a Landon Donovan goal. Donovan, who scored six of his 57 career USMNT goals against Mexico, avoided a wild challenge from goalkeeper Oswaldo Sanchez to slot home the clincher in the 91st minute.

Immediately after the goal, Sanchez petulantly attempted to kick Eddie Johnson, who was running over to Donovan to celebrate the goal. Sanchez didn’t make much, if any, contact and wasn’t given a card of any kind.

Some would argue a 23-year-old man representing his country by mocking an 18-year-old for something that is completely out of his control is uncouth, but he’s just following the lead of the current U.S. president.

This would rank higher had it been in a more important match, but it was a relatively meaningless friendly in which both sides trotted out inexperienced lineups full of youth. Maybe a little too much youth.

As the teams went into the locker rooms for halftime of their World Cup qualifier, Mexico assistant coach Francisco Javier Ramirez gave USMNT defender Frankie Hejduk a not-so-light slap in the face — and was never punished for the action.

"At the end of the day, no one was hurt. There was a little love tap and that was it. I still have my face. No damage done. It was fun. That’s just how emotional this game is and that’s how passionate they are about their sport. It was none of their players — I want to make that clear to everyone.”

The U.S. got the last laugh though, winning the match 2-0 in a match in which one player was ejected (see No. 6). 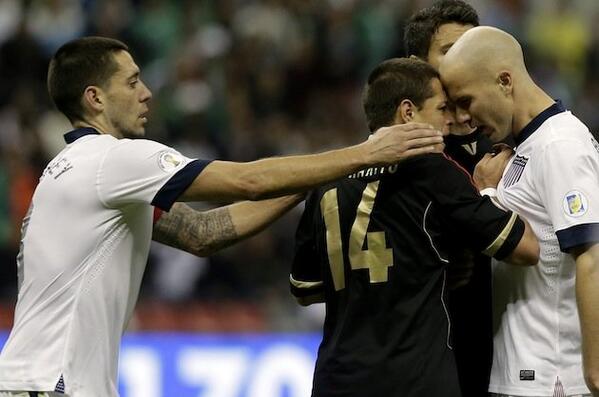 In a 2014 World Cup qualifier at the Azteca, the U.S. earned its first points in a meaningful match since 1997 (see No. 5). The most memorable moment of the 0-0 draw came when USMNT captain Michael Bradley went head-to-head (literally) with El Tri star Javier Hernandez, who also had to deal with an angry Clint Dempsey.

Most American fans do not like Rafael Marquez and this World Cup qualifier in 2009 is just one in a long list of reasons why (see also: No. 1).

In a heated match (aren’t they all?), Marquez deliberately kicked his cleats into U.S. goalkeeper Tim Howard, who was leaping to grab a ball in the box. Marquez was immediately sent off and the U.S. won 2-0, the third such Dos a Cero result in Columbus, Ohio.

The U.S. had never before earned a point in a meaningful match at the Azteca when this 1998 World Cup qualifier was played in November of 1997. But, following a heated U.S. Cup match in February (see No. 2), the USMNT fought valiantly for a 0-0 draw.

The result came despite Jeff Agoos being sent off in the first half. But what made this moment unique in the history of the rivalry was the behavior of the Mexican fans, who booed their own team and even cheered for the Americans.

It’s the type of moment you expect to occur late in a physical match after players have been going at it for a while. But this epic stare down came in the ninth minute of the World Cup qualifier in Columbus, Ohio.

Jared Borgetti, who scored 46 goals for Mexico, two of which came against the U.S., got into an altercation with USMNT center back Oguchi Onyewu. Borgetti was upset with Gooch’s physical play and tried to intimidate the American, who wasn’t about to back down either.

The two stared at each other for the length of time it takes for the universe to explode into being to be born and experience heat death. Then, because the match was in Columbus, the U.S. won Dos a Cero.

Sometimes, you just can’t hold it in.

Before an Olympic qualifying match between U-23 teams, reports surfaced that Landon Donovan peed on the pitch at Jalisco Stadium during training. Video later surfaced showing Donovan peeing in some bushes outside of the pitch itself, but that didn’t stop the American from becoming a hated figure in Mexico.

Of course, it didn’t help that Donovan had scored in the 2002 World Cup match and would haunt El Tri throughout his career. But, Mexico won the qualifying match 4-0.

Playing in the now-defunct U.S. Cup, in which the U.S. finished last out of four teams, Cobi Jones was taken out in the box by Alberto Garcia Aspe. Despite the blatant foul, no whistle was blown for a penalty, resulting in a melee between teams.

"That's what happens when you bring boys together," Lalas said. "Kicking, fighting and spitting."

Mexico won the match 2-0 at the Rose Bowl, El Tri’s first win over the U.S. on American soil in 23 years.

The most memorable moment of the match (besides the goals from Brian McBride and Landon Donovan), came in the 88th minute when Rafael Marquez absolutely clobbered Cobi Jones with no attempt to play the ball. Marquez was sent off, not for the last time against the U.S.

Mexico would have missed out on the 2014 World Cup were it not for the heroics of the USMNT. Graham Zusi scored a 92nd-minute equalizer against Panama, which knocked Los Canaleros out of the World Cup and sent Mexico into a playoff with New Zealad for Concacaf’s final World Cup berth, despite a tepid 2-1 loss to Costa Rica.

And, in a classic example of the flavor of the USMNT vs Mexico rivalry, El Tri didn’t return the favor four years later, when a win or draw against Honduras would have kept the U.S. World Cup hopes alive.