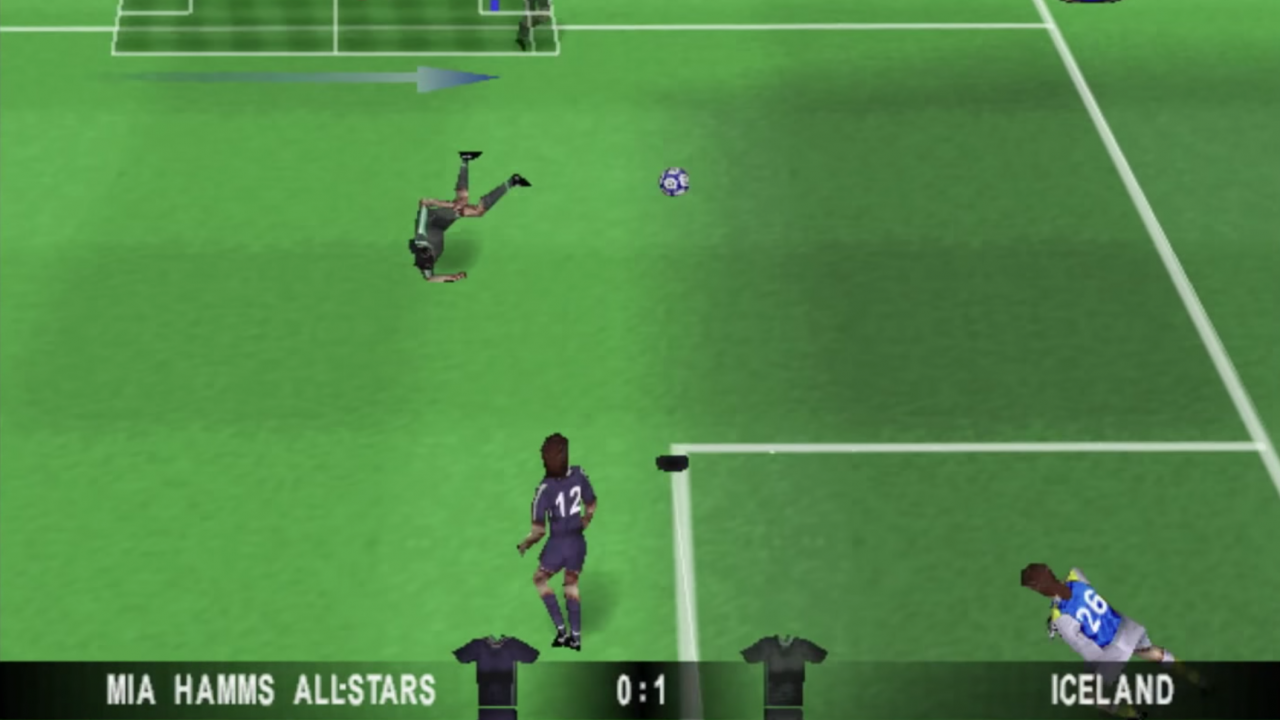 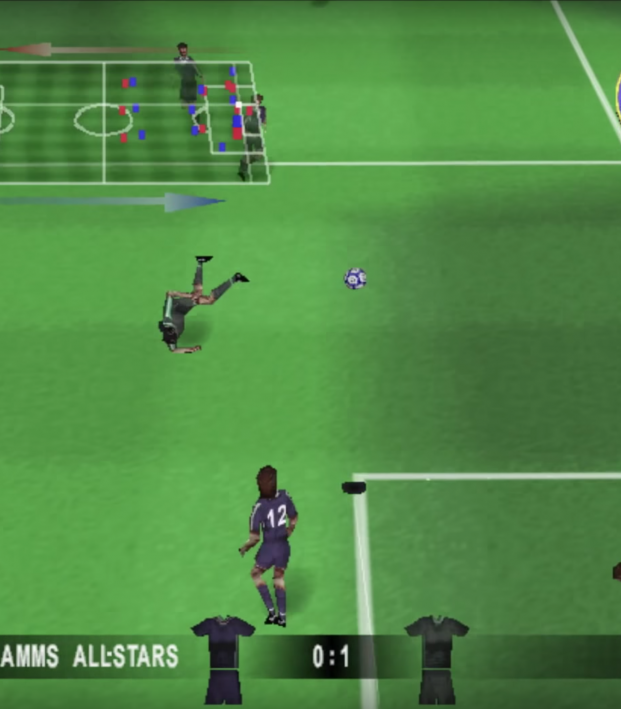 In 2015, EA Sports bragged to anyone and everyone who would listen about how FIFA 16 would be the first video game of its kind to feature women’s soccer players.

Given the popularity of women’s soccer — especially in the U.S., where the women are actually successful compared to the men — it seemed an odd omission for the FIFA franchise to not have included women for so long. It took the 2015 Women’s World Cup (being played in Canada, where the FIFA series is developed), to spur EA into actually including women in its best-selling sports franchise.

FIFA 16, released in the fall of 2015 after the USWNT captured the nation’s attention with another thrilling Women’s World Cup championship, was boasted by EA as a landmark moment for women’s soccer.

But FIFA 16 was not the first video game to feature women’s soccer by a long shot — and we’re not just talking about Princess Peach in Super Mario Strikers.

The FIFA franchise was, in fact, beaten to the punch by 15 years.

Mia Hamm Soccer 64 released on Nov. 9, 2000, for the Nintendo 64, becoming the first major video game released featuring women’s soccer players and to date the only one we know of focused solely on the women’s game. 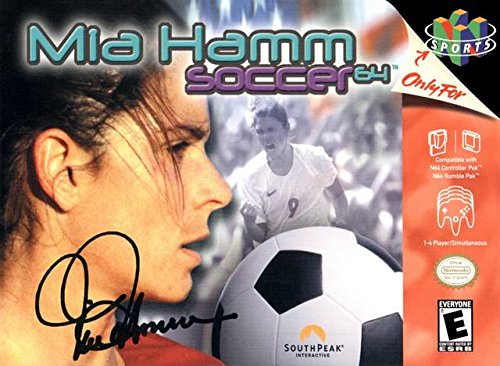 Mia Hamm Soccer 64 was a reskin of Michael Owens’ WLS 2000, which released at the same time. It was a blatant attempt to capitalize on the popularity of the U.S. women’s national team, which had just won the 1999 Women’s World Cup a year earlier in front of record crowds while the USMNT had recently finished dead last in the 1998 World Cup.

By this point, Mia Hamm was already a sponsorship maven, having appeared in dozens of commercials and being the most visible U.S. soccer player in the world.

Mia Hamm Soccer 64 was published by SouthPeak Games, which also released titles like Monty Python’s Meaning of Life, Pinky and the Brain: World Conquest, The Dukes of Hazzard II: Daisy Dukes It Out and the actually good 3D Dot Game Heroes and Trine.

SouthPeak tasked the all-male DC Studios with converting the European men’s soccer game to a women’s game in just 12 weeks. This was DC Studios’ first full release and the team went on to produce such blockbuster games as Bratz and Hannah Montana for the Game Boy Advance, a Charmed (yes, the TV show) web browser game and Fear Factor: Unleashed, a GBA title where players went through mini games to determine whether their character could pull off the idiotic gross-out stunts made popular by the idiotic TV show of the same name.

The switch from a men’s soccer game to a women’s soccer game mostly involved putting long hair or ponytails and slightly enlarged chests on all the character models and creating 32 international and 18 made-up U.S. League teams to play as.

So, uh, was the game any good?

With 32 international teams like Brazil, Russia and the U.S., a slew of fictional U.S. women’s soccer league clubs plus a Mia Hamm All-Stars team, the game let you play in one of four modes: Exhibition, U.S. League Season, World Cup and Practice. You could make player substitutions and change formation during the game and change camera angles. The game also had 10-second instant replays to rewatch your best goals.

Graphically, the game wasn’t too bad for its time, but the game offered little in the audio department. While video games are mostly visual experiences, audio cues are vital to immersing a player into the created world, but Mia Hamm Soccer 64 did little to convey the atmosphere of the beautiful game.

Former USWNT player and TV broadcaster Wendy Gebauer was brought in to do commentary and her performance was strong. However, the production team only had her read a limited amount of basic phrases like “nice pass” and “man on.” The small amount of audio becomes extremely repetitive, but it beats the other sounds of the game, like the single “poot” sound of the ball being kicked, the static-filled, faint crowd noise and occasional referee’s whistle.

The gameplay — you know, the most important part of the game — wasn’t much better. While the physics of the players and ball were actually pretty good for their time, the game was clunky to control and hampered by bad AI.

There were two control options: Easy and Professional. The latter was so absurdly difficult and complicated to control it was essentially useless, while the former lacked the responsive reactions you’d expect from a fast-paced sports title. Computer-controlled players would regularly dribble out of bounds and the framerate was prone to slowing down to almost unplayable levels.

Perhaps worst of all, while on defense you’d have no jurisdiction over which player you control, randomly being switched around by the whims of the computer. This is something that even the earliest soccer video games had, but for some reason was ignored in this title.

The IGN review of Mia Hamm Soccer 64 from Nov. 22, 2000, declared in a subhead it’s “the next best thing to staring at your Mia Hamm posters.” We’re not quite sure where Cory D. Lewis was going with that, but the review overall wasn’t kind to the title, giving it a 4.8 out of 10, which honestly feels a little generous. IGN scored the game a 3 on presentation (“minimal effort”), a 5 on graphics (player models “not very feminine”) and 1 on sound (“practically none”).

The IGN review is the only one listed on Metacritic — not a single user has decided it was worth his or her time to write a review. FIFA 19 for PS4 has 67 critic reviews and 270 user reviews, but to be fair Metacritic didn’t exist back when Mia Hamm Soccer 64 came out (it launched a couple months afterword).

Despite the fact the game wasn’t all that good, it sold quite well. The 42,886 copies sold might not seem like a huge number today, but compared to Earthworm Jim, a super-popular contemporary title that sold 76,000 copies, Mia Hamm Soccer 64 was a surprising success for an all-women’s soccer game in the U.S.

Wildly, Amazon is still selling Mia Hamm Soccer 64, including apparent new copies. You can also find the game on emulator/ROM sites if you want to wade into the dubious world of pirating 20-year-old video games.