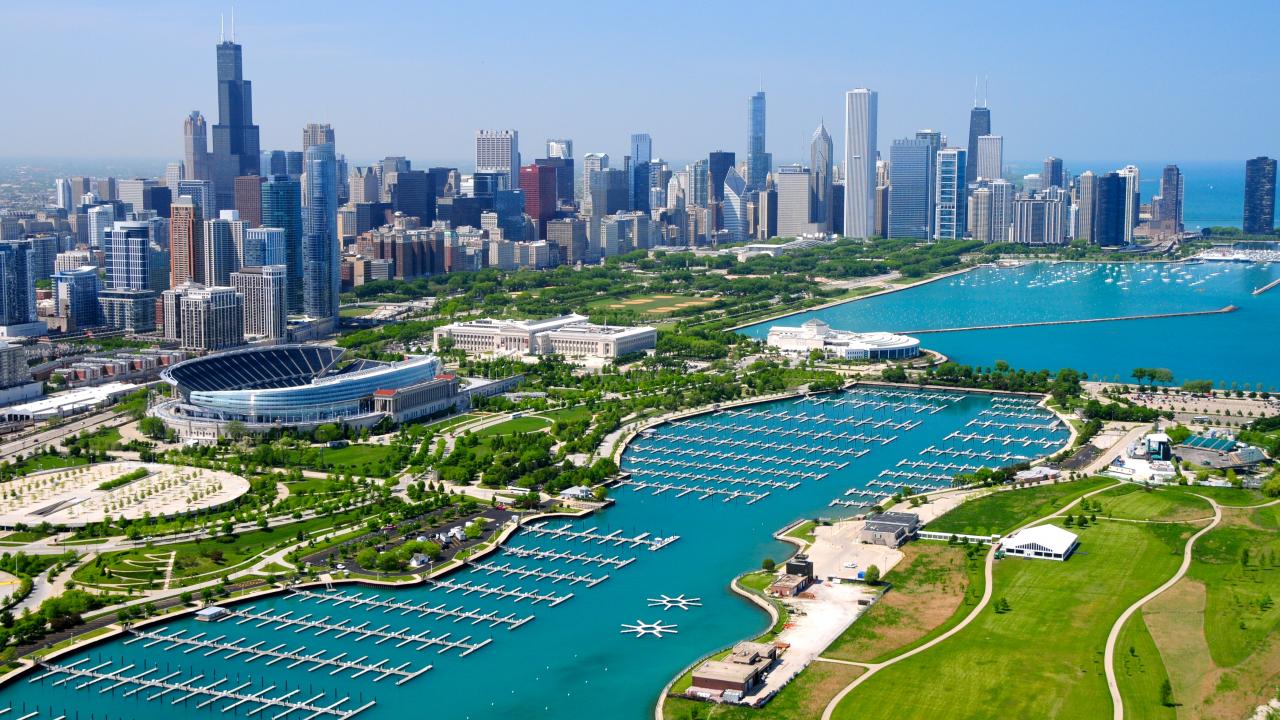 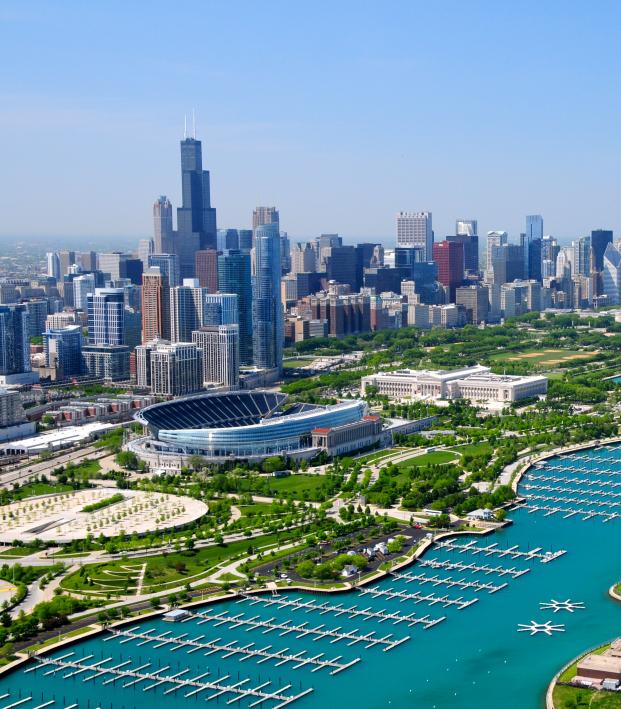 The Chicago Fire Return To Soldier Field; Here Are Four Itineraries For The Perfect Gameday 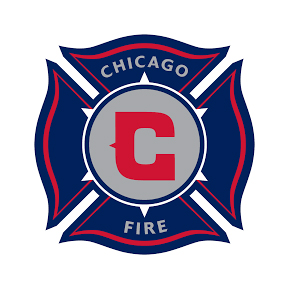 After a 14-year residence at SeatGeek Stadium in Bridgeview, the Chicago Fire are finally returning home. The 2020 MLS season will mark the Fire's return to historic Soldier Field in downtown Chicago, and the homecoming comes replete with everything the Second City has to offer.

Denizens of Chicago can guarantee a spot at Soldier Field with just a $20 deposit, ensuring their participation in a magical gameday experience. You can also get on the insider list to get more information as the 2020 season draws closer — with a chance to win season tickets by signing up now.

The Chicago Fire Return To Soldier Field. Get On The List To Learn More...And You Could Win.

If you’re curious what gameday might entail, we've got you covered. We put together four itineraries that start at different points in the city so fans from every neighborhood can get inspired. Or, try them all and experience everything the Windy City has to offer. No matter what, these gameday itineraries deliver a 100 percent Chicago-style soccer experience and end with your home team playing under the bright lights at Soldier Field.

Itinerary #1, Start: North Side of Chicago 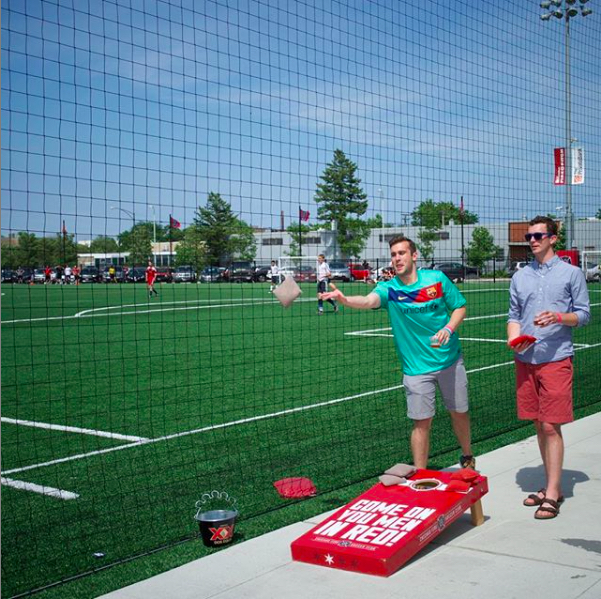 What more could you ask for? Photo: @heinekenpub97 | Instagram

With fields to play on and Heineken Pub97 to grab a bite to eat or a pint to drink at, there’s no better starting point than the CIBC Fire Pitch. Check out the website for pickup soccer times, or just head to Heineken Pub97 — located inside the facility — to kick back. The pub opens at 10 a.m. on Saturday/Sunday and serves brunch until 2 p.m.

With twelve big-screen, 4K televisions, a passionate staff and a fully-stocked bar, this place was built by soccer fans, for soccer fans. There's also a merchandise store to ensure you're properly geared up for tonight's game. 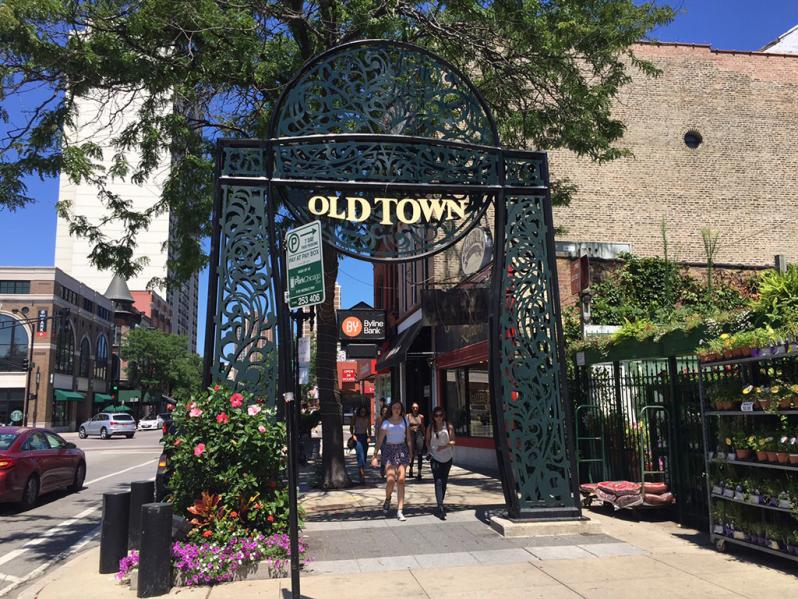 Chicago’s historic Old Town neighborhood is famed for its beautiful architecture, independent shops and quaint streets that predate the city’s grid system. There are renowned sights — like the St. Michael Catholic Church, one of seven buildings to survive the Great Chicago Fire — and legendary entertainment hotspots, including The Second City comedy club.

For food and drink, Old Town Ale House has been a neighborhood staple since 1971, Twin Anchors serves some of the best ribs in Chicago and Old Town Pour House boasts 90 beers on tap. 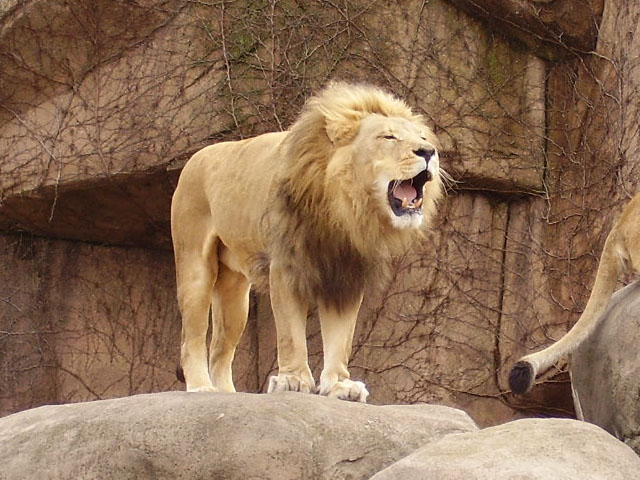 Tucked inside the sprawling Lincoln Park is one of the oldest zoos in North America, and what’s more, it’s also one of the few free admission zoos remaining in the United States. There’s nothing like casually strolling through the park before promptly coming face-to-face with an African lion or black rhinoceros.

Other popular attractions include the polar bears, penguins, gorillas, monkeys and big cats. In all, there’s over 1,100 animals from some 200 species within the Lincoln Park Zoo, giving you a spectacular viewing experience that’ll build perfectly into tonight’s main event at Soldier Field.

Itinerary #2, Start: West Side of Chicago 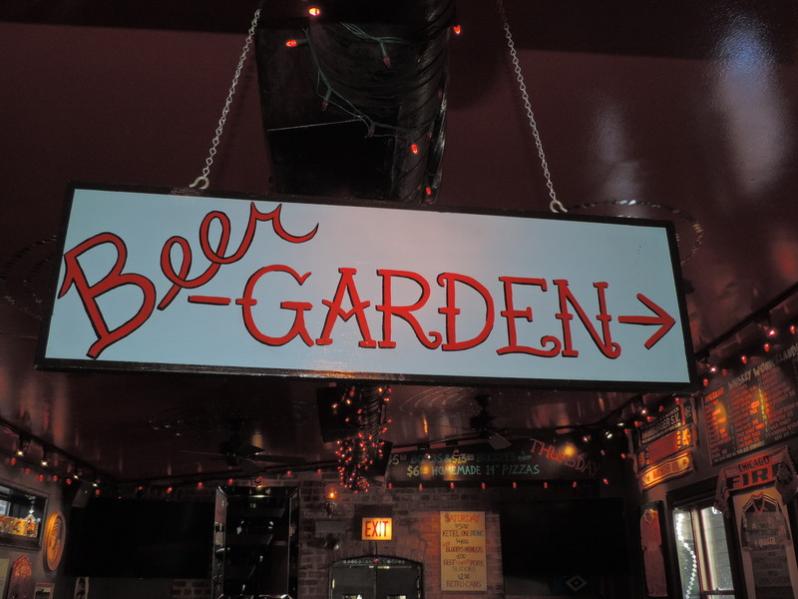 The 1,200 square-foot patio is a fine place to drink. Photo: Cleospub.com

Located two miles west of downtown Chicago in the Ukrainian Village, Cleos is the city’s best spot for international soccer. As an official Chicago Fire Soccer Bar, you’ll be able to watch any match on one of their 16 HDTVs while sampling a selection of over 50 specialty and local beers.

The homemade, brick oven pizzas are legendary, but Cleos also serves brunch, a huge variety of appetizers and some classic Chicago sandwiches. 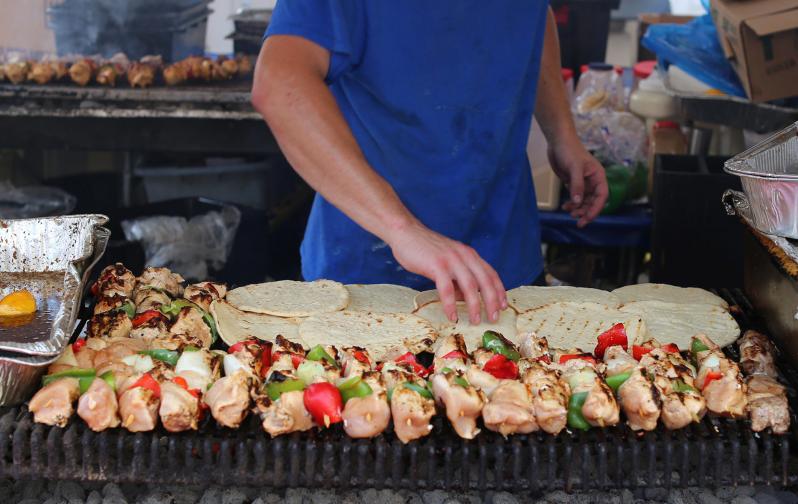 If you’re a history buff, the National Hellenic Museum allows you to dive into Greek history and the Greek immigrant experience in Chicago, or you can just enjoy the incredible amount of tasty Mediterranean food in the neighborhood: tzatziki, flaming saganaki, gyros, baklava, moussaka, you name it.

Some famous dining spots include the Greek Islands Restaurant, Nine Muses Bar and Grill, Mr. Greek Gyros and the Artopolis Bakery. Who knows, you might just run into Fire great and Chicago's own Frank Klopas! 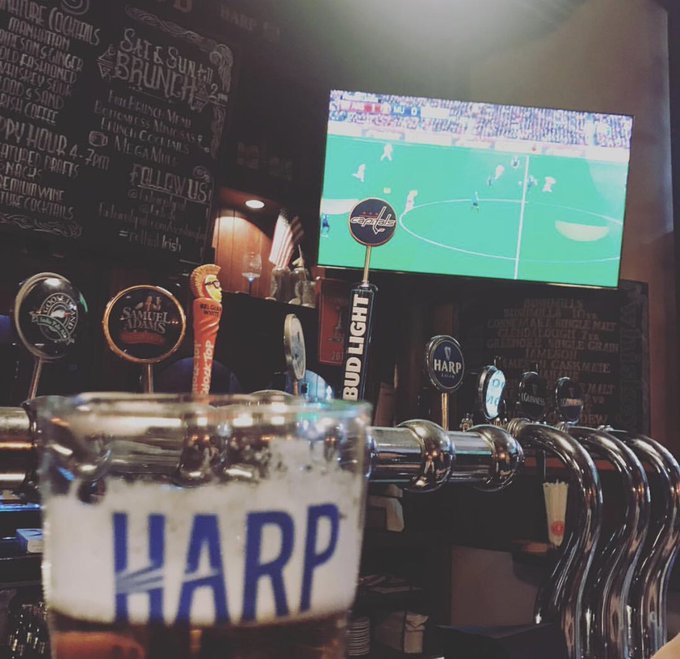 Fado's is one of nine members of the Fire's Premier Pubs network. Photo: @fadochicago | Twitter

As one of nine spots to earn a Chicago Fire Premier Pubs designation, Fadó Irish Pub in River North is the perfect final stop before heading to Soldier Field. Upon entering this timeless pub, you’ll be surrounded by fellow Fire supporters, as well as a large beer selection, great whiskey and a famous offering of fish and chips.

Itinerary #3, Start: South Side of Chicago

Pilsen boasts some of the most authentic Mexican cuisine in the United States, and the neighborhood’s streets are lined with endless tienditas and taquerias. Some of the more famed taco establishments are Don Pedro Carnitas, Sabas Vega, Nuevo Léon Restaurant and Raymond’s Tacos. 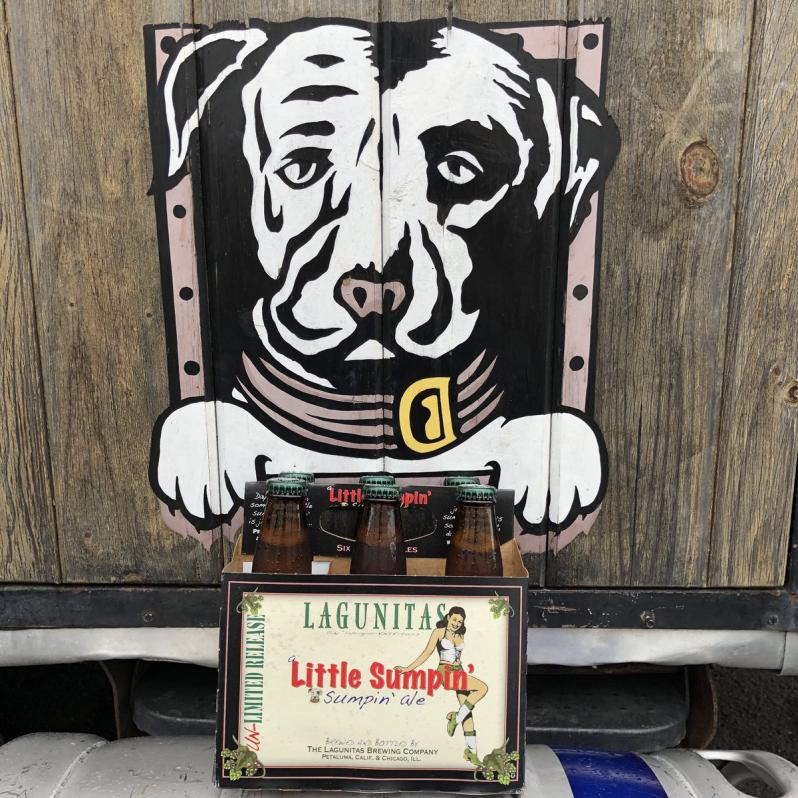 Can't say no to those puppy-dog eyes. Photo: @lagunitasbeer | Twitter

Lagunitas has taprooms in California, Seattle and Chicago, but the Chicago space is exceptional with its wild event rooms, live music, tasty eats and, oh yeah, the beer. You know you want a Little Sumpin’ Sumpin’ before the game, and Lagunitas is here to provide. 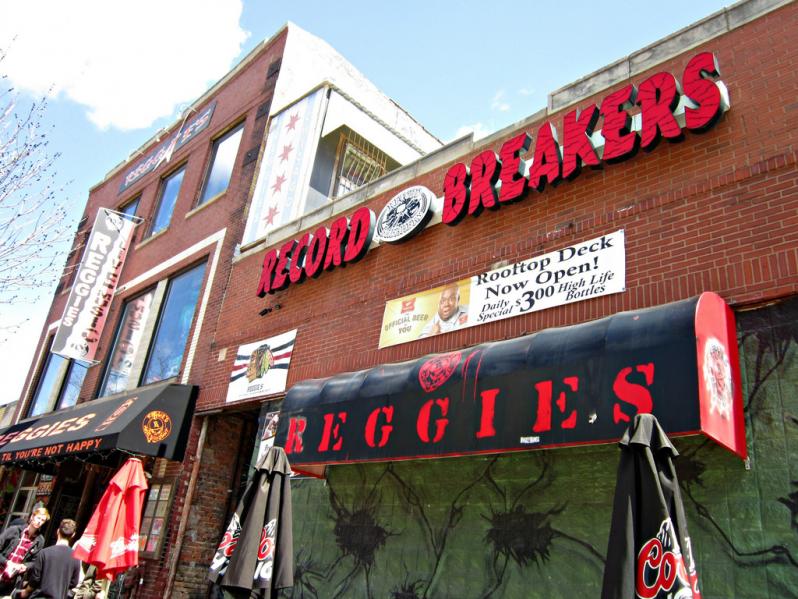 This place has it all. Photo: Reggieslive.com

Just a one-mile walk to the stadium, Reggies is a ruckus supporters’ haunt that includes a terrific bar and grill, a rock club and a record store — all under one roof. If that doesn’t draw you in, then the rooftop — which seats 99 people and features eight flat screens — most certainly will. 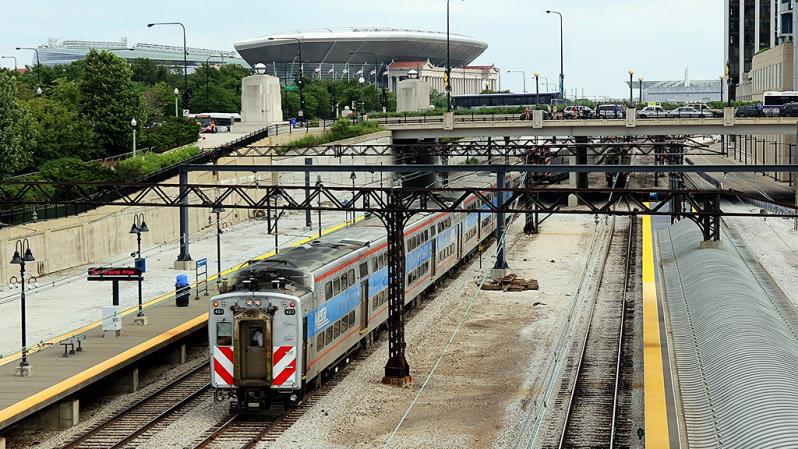 With Metra, you don’t have to worry about missing any action while you’re trying to find a parking spot or looking to beat everyone else out of the parking lot. It’s the easiest way to get to Soldier Field — whether you’re coming from the south, west, north or northwest suburbs — and it’s BYOB. Yes, you can drink on the train. So grab a six-pack and enjoy your ride to the best soccer experience in Chicago. 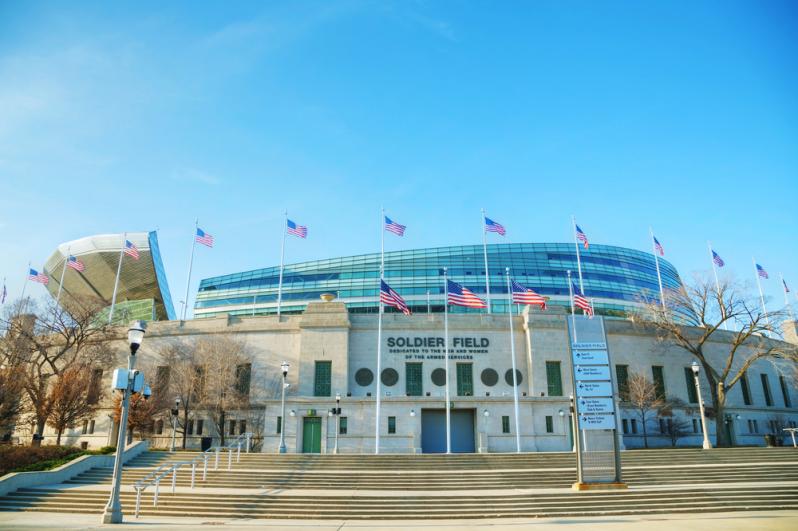 The beautiful game is back. Photo: Shutterstock

If you’ve still got time before the match (or you’re looking for somewhere after), The Scout Waterhouse + Kitchen, Weather Mark Tavern and First Draft are excellent options near Soldier Field, but it’s really time to get inside the 95-year-old stadium and enjoy the pregame atmosphere provided by supporters’ groups like Section 8 Chicago.

Again, fans can guarantee their seat at Soldier Field with a deposit of just $20, ensuring your place for the most anticipated season in the club’s 21-year history.

Chicago Fire is Major League Soccer's franchise in the Windy City. In 2020, the club will return home to Soldier Field where fans can be a part of Chicago-style football. Learn more...