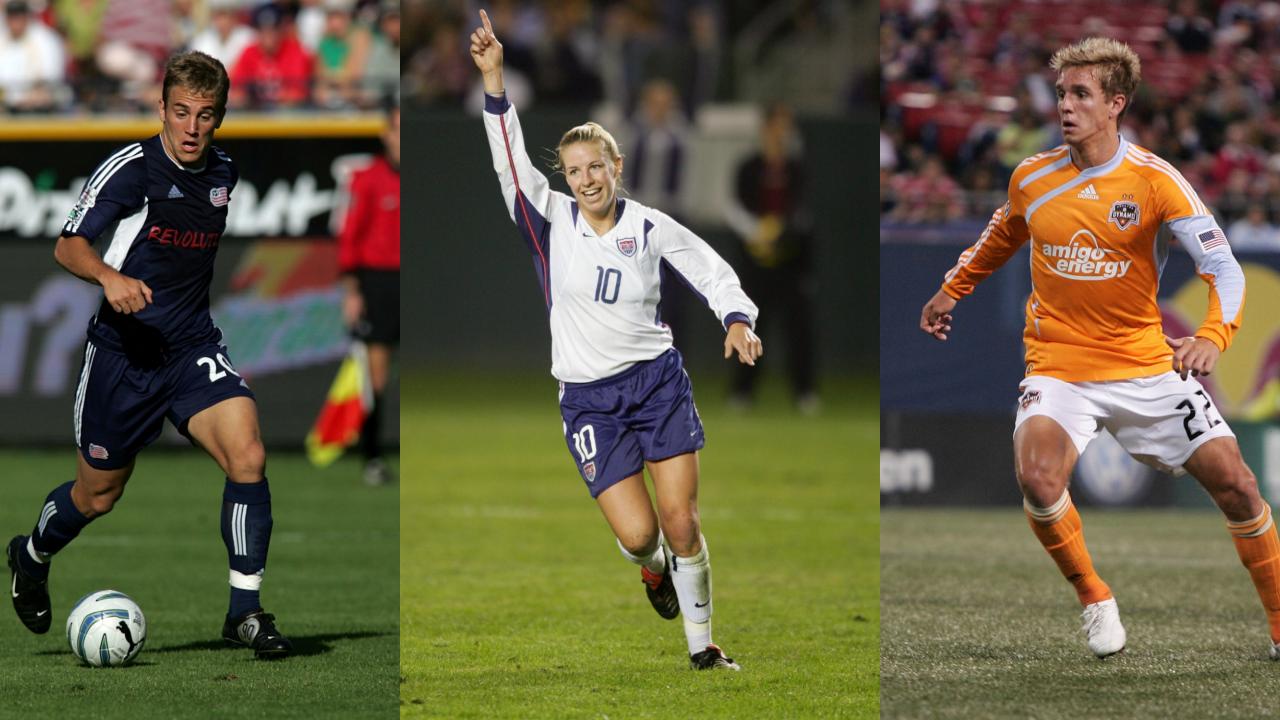 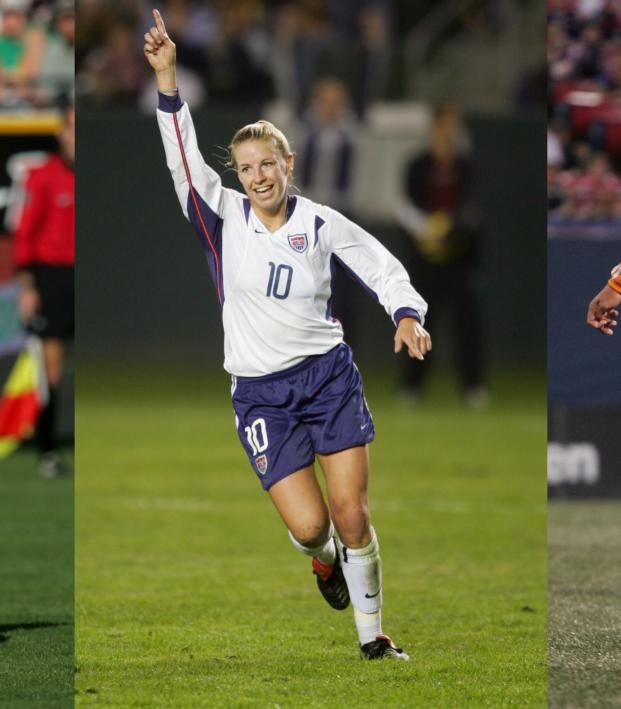 These days, Alexi Lalas is known for his outlandishly stupid hot takes. But like most American soccer broadcasters on TV, Lalas had quite the playing career back in the day, including a stint in Serie A and two World Cups.

Aside from play-by-play men and women like John Strong and JP Dellacamera and studio hosts like Rob Stone and Max Bretos, most American soccer broadcasters were experienced players before they joined the world of television.

American soccer broadcasters are often put down by Euro snobs who don’t think it’s not soccer football unless an old, stuffy British man is describing the action. But many who transmit into our homes in the U.S. do just as well as any TV personality in the world. Not all (looking at you, Alexi), but a fair amount.

With that in mind, we thought we’d take a look back at how five American soccer broadcasters looked when they were footballers, not announcers.

Before Stu Holden wore flamboyant tops and pants that are far too short on Fox and TNT, Stuart Alistair Holden was one of the most precocious soccer players to ever wear a USMNT jersey.

If only injuries hadn’t gotten in the way.

Holden was born in Aberdeen, Scotland, but moved to the Houston area at the age of 10. After a two-season college stint with Clemson (just one college in Texas offers men’s Division I soccer even to this day), he signed with Sunderland.

And thus began his bad luck as a player.

Before Holden could make an appearance for the Blackcats, he was twice injured outside of game action. First, he was attacked outside of a Newcastle nightclub for being a Sunderland player, fracturing his eye socket. When he returned to training, Holden suffered an ankle injury that ruled him out for the rest of the season.

So Holden returned to Texas, where he joined the Houston Dynamo for their inaugural campaign, helping them win back-to-back MLS Cup titles.

Four stellar seasons in Houston earned Holden another shot in England, this time with Bolton Wanderers. Sadly, injuries derailed his career again, but when he was able to play — as in the 2010-11 campaign — he was heroic for the club.

Holden helped Bolton achieve a seventh-place finish that season, being voted the club’s player of the year. Alas, even that campaign ended early when Manchester United’s Jonny Evans broke Holden’s leg with a horrible studs-up tackle. A few surgeries later, Holden was forced to retire at 28.

Despite having been born in Scotland, Stu Holden made 25 appearances for the USMNT, scoring three goals. But injuries also plagued him internationally, as when Nigel de Jong broke his leg in a 2010 friendly.

Holden was able to recover in time to make the 2010 World Cup squad, and perhaps his most notable moment for the USMNT was being the first guy on the scene to celebrate with Landon Donovan after he scored the epic late winner against Algeria to win Group A. (And of course we have to show that to you.)

Having retired young, Holden quickly jumped into the broadcast booth, first with ESPN and NBC before joining Fox Sports.

Holden quickly became Fox’s lead soccer analyst, calling the 2018 World Cup alongside John Strong. Sadly, one can’t help but wonder if Holden could’ve instead helped the USMNT qualify for the 2018 World Cup had his career not been cut short.

Aly Wagner is probably the best American soccer announcer on TV right now, but how many people remember her lengthy playing career in which she racked up 131 caps with the USWNT?

The former ESPN and current Fox Sports broadcaster started her USWNT playing career in 1998, when she was a freshman midfielder at Santa Clara. The 2002 Hermann Trophy winner went on to win two Olympic gold medals in the Red, White and Blue.

With more caps than all but five USMNT players, Wagner holds the distinction of having the third-most USWNT appearances without having won a Women’s World Cup, behind only fellow broadcasters Heather Mitts and Cat Whitehill. She twice finished with a bronze medal at Women’s World Cups.

But Wagner has distinguished herself in the booth. In 2018 she became the first woman to call a men’s World Cup match in the U.S., and we rated her and Derek Rae as Fox’s best broadcast duo at the 2018 tournament.

The following year, she headlined Fox’s trailblazing group of announcers, joining JP Dellacamera on the lead broadcast team for the 2019 Women’s World Cup.

It’s not a Premier League morning without seeing Kyle Martino’s giant tie knots and always-glorious hair on NBCSN. More well-known for being one of the few Americans on NBCSN’s EPL crew, Martino was a pretty good ball player himself back in the day.

A Gatorade National Player of the Year in 1998, Martino joined the Columbus Crew in 2002. He beat out lefty legend Brad Davis to win the MLS Rookie of the Year Award that season.

Martino won a U.S. Open Cup and Supporters’ Shield with the Crew before finishing his career with the LA Galaxy.

With eight caps for the USMNT — including as a 22-year-old at the 2003 Confederations Cup — Martino’s most notable moment as a player came in 2005. A midfielder who didn’t score a whole lot, Martino netted his only international goal with a marvelous volley in a World Cup qualifier against Panama. (The next man on this list also scored in that game.)

Like many on this list, Martino was forced to retire early due to injuries. He seamlessly moved into the broadcasting ranks, joining ESPN and hosting shows like “36 Hours” on the Travel Channel and “Spartan Race” on NBC. He hit his stride as part of NBCSN’s Premier League coverage.

Outside of soccer, in 2011 Martino married actress Eva Amurri, the daughter of Oscar-winner Susan Sarandon and Italian director Franco Amurri.

The couple had two children, but they announced in November they were splitting up with a third child on the way, presumably because Kyle is now more popular than her.

The shoutiest man in U.S. soccer didn’t always express himself with “?I” at the end of every tweet; he used to be one of the best strikers in MLS.

Born in Minneapolis but raised in St. Louis, Twellman was a standout for the Maryland Terrapins for two years before leaving school early to sign with Bundesliga side 1860 Munich. Never able to make it on anything other than the third-division reserve squad, he came back to the States and became a New England Revolution legend.

The 2005 MLS MVP led the Revs to four MLS Cup finals from 2002-07, losing them all but becoming one of the most feared forwards in the league in the process.

Twellman played his entire MLS career with New England and still ranks as the club’s all-time leading goal scorer. He amassed 101 MLS goals in eight injury-plagued seasons, 10th most in league history. Twellman’s 0.58 goals-per-game ratio is the best among all players ranked in the top 10 in MLS goals, and no one reached 100 goals faster until Bradley Wright-Phillips usurped him in 2018.

Twellman also made 30 USMNT appearances, scoring six times, including a hat trick in a friendly against Norway.

Alas, Twellman was forced to retire at 30 because of repeated concussions and neck injuries. To this day, Twellman remains a huge advocate surrounding sports-related concussions, founding the THINKTaylor foundation to raise awareness.

Nowadays, Twellman is one of the most visible American soccer broadcasters, appearing often on SportsCenter, hosting his own shows and whenever ESPN airs a match.

Perhaps the most infamous of American soccer broadcasters, Alexi Lalas was just as much of a character on the pitch as he is now off it. The brash defender was one of the most recognizable American players in the 1990s given his giant 6-3 frame, bright red mane and hideous goatee.

A former Hermann Trophy winner at Rutgers, Lalas was on the 1992 Olympic team, which helped earn him a trial at Arsenal later that year.

While the trial didn’t work out, Lalas went on to play in all four games for the host Americans at the 1994 World Cup. The strong showing drew the attention of Padova, which brought him to Italy to play for the Serie A side.

Lalas later spent seven seasons in MLS, most with the New England Revolution and LA Galaxy. The 1995 U.S. Soccer Athlete of the Year won a Concacaf Champions’ Cup, U.S. Open Cup and MLS Cup with the Galaxy.

Since retiring for good in 2003, Lalas has stayed around the game both as an analyst and in various front-office roles in MLS. He started his commentary career with ESPN. When the Worldwide Leader lost the World Cup rights to Fox, Lalas jumped ship to join Fox Sports.

Nowadays, you’re more likely to see him berating a random Twitter troll or making outlandish statements on TV or his podcast than any old highlights of Lalas as a player. But without a doubt he was an iconic American soccer figure long before he entered the broadcast booth.

There are plenty of other American soccer broadcasters we could’ve included on this list, perhaps most noteworthy Julie Foudy, who was a 1999er who ESPN prominently used during its 2006 World Cup coverage. Many more are moving into the broadcast ranks of late, such as Tim Howard and Maurice Edu on TNT. Let us know if you’d like us to delve into their careers in the future.