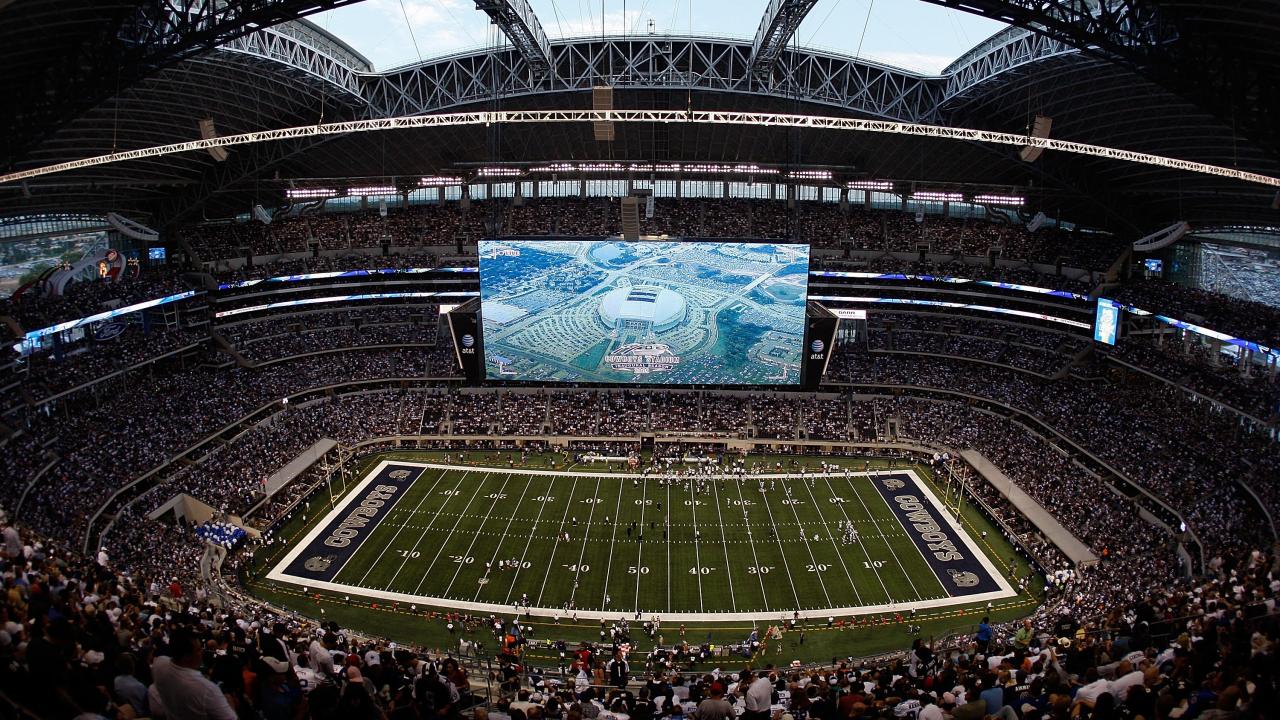 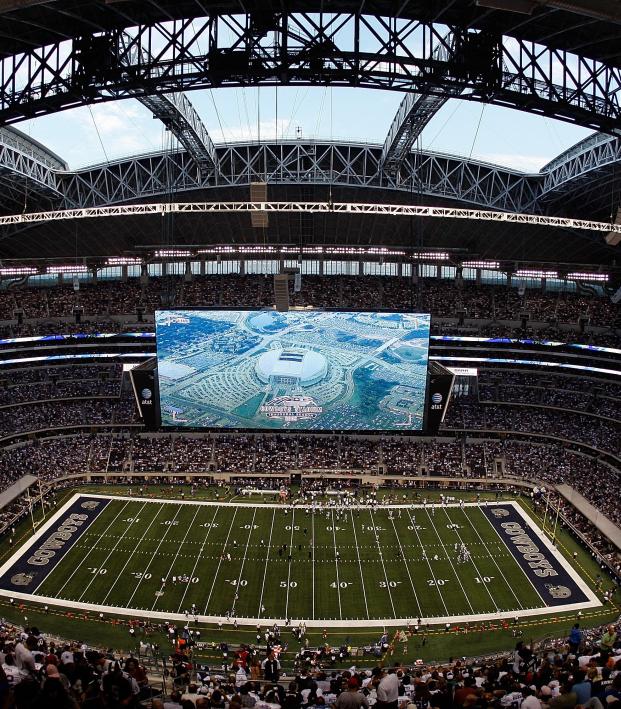 Where Soccer Ranks In The Most Attended U.S. Sporting Events

In his pre-Super Bowl interview with CBS this past week, Donald Trump said he would prefer his 12-year-old son Barron to not play American football, despite the NFL and college football’s status as a leader in highest sports attendance in the United States.

It’s too dangerous, the U.S. president said, referring to the concussion rate as well as the prevalence of other types of injuries.

“A lot of people including me thought soccer would probably never make it in this country but it really is moving forward rapidly,” Trump told CBS’s Margaret Brennan of “Face the Nation.”

In fact, the Trumps set up a full-size soccer goal in the Jacqueline Kennedy Garden outside the White House.

Fun fact: Barron Trump is such a huge soccer fan that he has a full size goal outside the White House pic.twitter.com/XjlCAC56aA

With soccer replacing basketball in the White House since 2016, maybe we shouldn’t be too surprised the 2018 MLS Cup in December, won 2-0 by Atlanta United, had more fans in attendance (and a greater atmosphere) than the Super Bowl, played in the same Mercedes-Benz Stadium in Atlanta a couple months later.

But, when you look at the most attended sports in the U.S. on average, soccer still has a long way to go to catch American football, and even soccer in the rest of the world.

The 2018 MLS Cup final was the highest attended soccer match of all time, drawing 73,019 fans into MBS on Dec. 8. In comparison, Sunday’s Super Bowl drew 70,081 in Atlanta. While much of that is down to fewer tickets being available because of stadium configuration to accommodate different needs, it is an impressive statistic for MLS to flout.

While the match was an MLS record for a non-doubleheader, it ranks No. 73 all-time in largest crowds for a soccer match in the U.S. Most of the highest-attended soccer matches in the U.S. did not involve any American teams, with the biggest crowd for a U.S. team coming at the 1994 World Cup.

You can find a full list of highest attended soccer matches in the U.S. here. 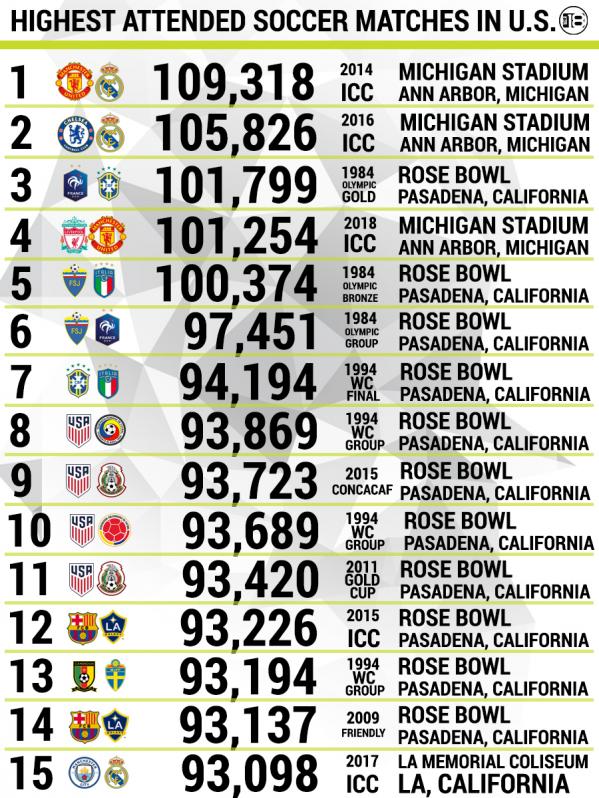 So, how do the highest-attended soccer matches in the U.S. compare to the other highest sports attendance numbers in the U.S.?

Here are the records for various leagues and sports in the United States.

Highest Sports Attendance In The U.S.

Note: Other MLS matches have had larger crowds, but as part of a doubleheader.

* — The announced attendance was 105,491 based on tickets sold, but fewer people made it into the stadium, keeping the NHL from claiming the Guinness World Record from the next game on our list.

Note: The largest crowd for a non-exhibition game was 62,046, when the Chicago Bulls and Atlanta Hawks played at the Georgia Dome in 1998. 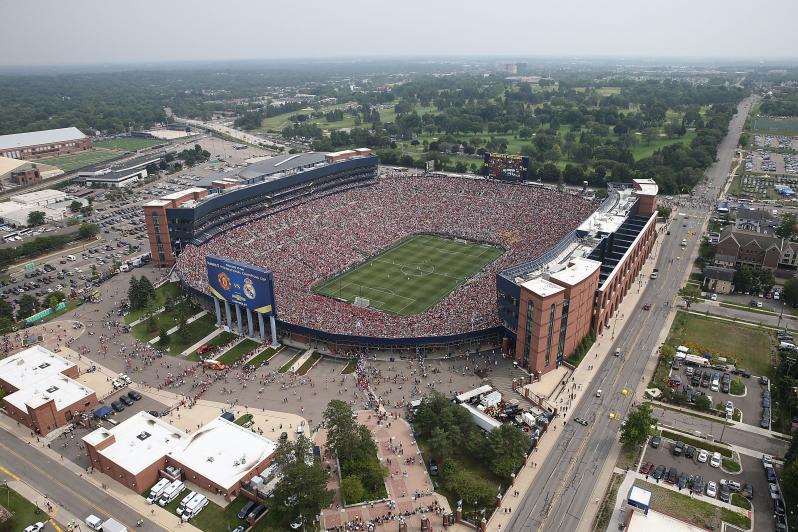 Michigan Stadium for Man U vs. Real Madrid in 2014. Photo: Getty Images

(The most in a football stadium was Notre Dame at Michigan in 2013, with 115,109 fans at Michigan Stadium in Ann Arbor, Michigan.)

Note: The capacity at Indianapolis Motor Speedway is 257,325 but features massive amounts of standing room. The 350,000 number is the best guess for the record attendance in 2016. And for the record, we don’t really think motor sports are comparable to human sports, but we figured we’d toss this stat in the mix for argument’s sake.