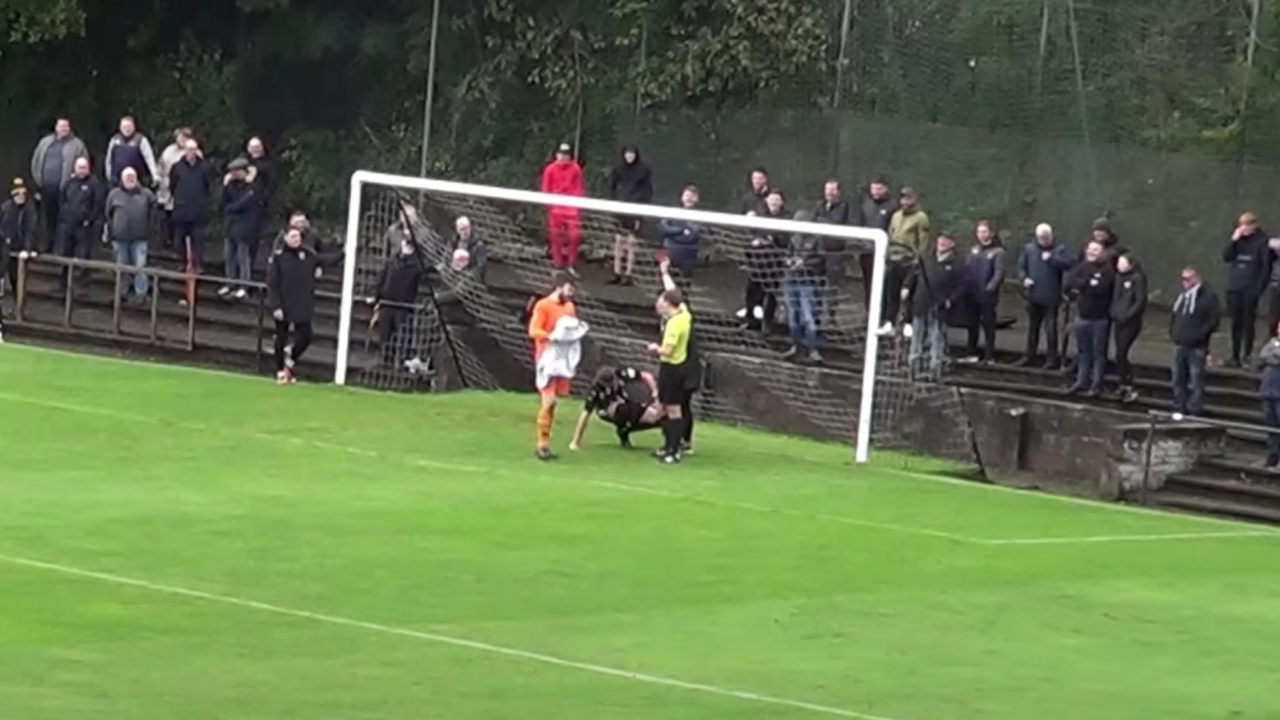 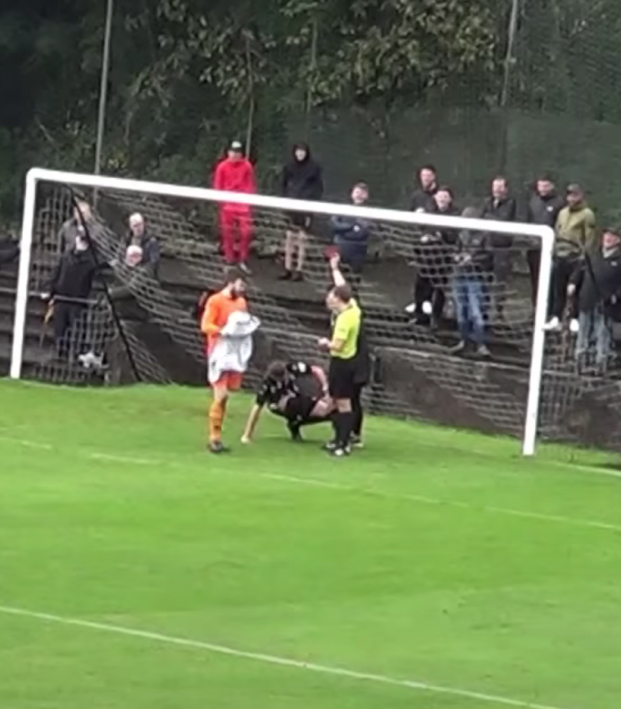 Usually when we write about a random lower league soccer match, some wild incident or crazy goal has to be involved — and Scotland has been a hotbed for such action, ranging from the offbeat to the downright bizarre.

I've covered automated match cameras that followed the assistant referee's bald head instead of the ball and a fan that felt the need to watch a match from halfway up the 240-foot-tall Dumbarton Rock (when his club wasn't even playing, mind you).

But this story is a little different. Yes it does take place in the obscure reaches of Scottish football, but this highlight real from the southside of Glasgow has no commentating mishaps or outlandish behavior from anyone in attendance. The highlights are not likely to prompt a soliloquy in the comments section of an r/ScottishFootball post.

In fact, there aren't really any noteworthy moments at all (by Scottish football standards) that came from Saturday's fixture from the West of Scotland League Premier Division between Pollok FC and Auchinleck Talbot.

Yet across the 14-minute highlight tape of the sixth-tier match, you have just about everything a soccer fan could possibly want.

Penalties, red cards, goal-line clearances and minor controversies abound. The rain is coming down in buckets, the fans are animated and their interactions with the players are exceptional. To add to the excitement, this is a mid-season clash between the top two teams in the league as they battle for the Premier Division title. What more could you ask for?

The action started in the seventh minute, when a poor punch from the Talbot keeper allowed Pollok's Adam Forde to score an easy tap-in — much to the delight of the home supporters.

There was end-to-end activity, but the real controversy started around the half-hour mark, as a jersey tug inside the 18 gave Pollok a penalty on what seemed to be an innocuous long throw.

Ryan McGregor's initial spot kick was saved onto the post, but he was able to slot home the rebound. There was more interesting refereeing to come, as Pollok's Evan Horne was sent off just a few minutes later for a second bookable offense. It seemed a harsh call, as the Talbot player dribbled in front of him, causing an incidental tangling of legs.

The questionable calls only continued, and in the 37th minute, Talbot scored a penalty after one of its players was deemed to have been impeded off the ball following a cross from the right wing. This allowed Jamie Glasgow (by the way, great Scottish name) to open the scoring for the visitors.

The match was tied just two minutes later thanks to another effort from Glasgow, as his cross across the face of goal went untouched into the back of the net.

Probably the most mental half of football I’ve ever seen live. Pollok went 2-0 up before conceding a penalty, getting a man sent off and shipping an equaliser. All in the space of around 5 minutes. Unreal entertainment for a neutral.

The head official stayed in the spotlight in the second half thanks to some more dubious decisions. In the 54th minute, Ryan McGregor scored another dubious penalty for the hosts, as the official didn't like some shirt pulling he saw in the penalty area during a long throw.

Yet the most bizarre refereeing decision in the match came in the 64th minute. Pollok defender David Brownlie sustained a leg injury after an arduous defensive stand, thus delaying the ensuing goal kick. While down, he received significant abuse from the Talbot fans behind the net, and when he gave a verbal rebuke, the referee took offense to his language and sent him off.

Then (stop me if you've heard this before) Pollok had a third player sent off just four minutes later, as attacker Adam Forde gave his defender a fierce elbow to the head while attempting to control a long goal kick.

Pollok defended resolutely despite being down to eight men (yes, eight). Goalkeeper Andy Leishman made a trio of astonishing saves, but Pollok couldn't hold out while down three men, and Talbot equalized through a smart low cross in the last minute of normal time.

Now take a breath and watch the most action you've ever seen condensed into a single 14-minute highlight reel.

As Connor of the Scottish Football Adventure Blog wrote: "It had literally everything you could possibly want as a neutral. I paid £7 entry, £1.50 for a programme and £2.50 for food and drink. £11 for six goals, three red cards, three penalties and a heap of controversy. There truly is no better value in Scottish football than the lower leagues."

While Saturday's fixture was abnormally crazy, Pollok is no stranger to ... let's call them ... interesting matches. Just two weeks ago the club's Scottish Junior Cup match was abandoned following an injury time brawl.

With two minutes to go the referee has walked off the pitch and the game has seemingly been abandoned after a mass brawl following a heavy tackle which saw all round chaos.

One of the maddest ends to a game of football I've seen.

There were two red cards shown in the waning minutes of the match, followed by a tackle so brutal that the highlight tape only shows a black screen (it gets good at 9:57 and the black screen comes at 11:46).

The best moment of the video came as the referee was walking off the pitch after it was announced that the match was abandoned. Only in Scotland. 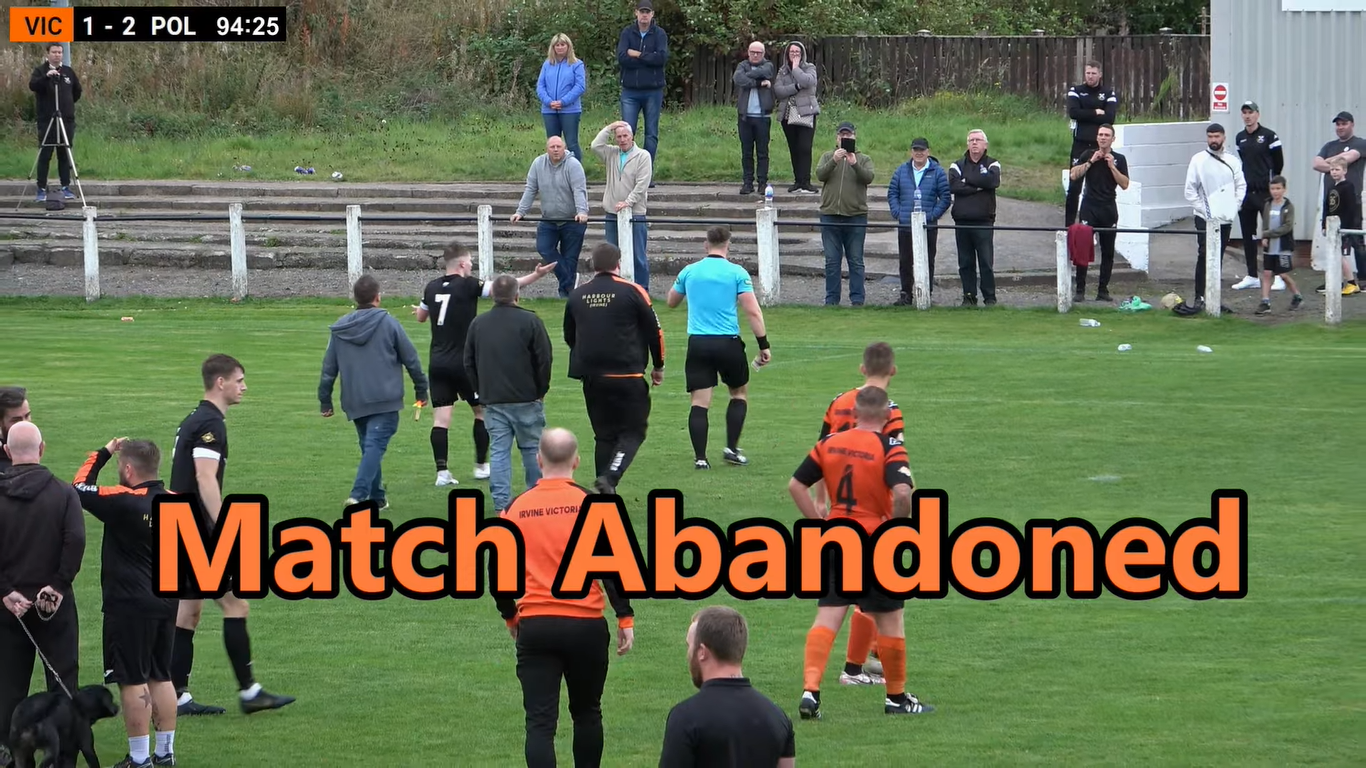 So if you're in the mood for a brash-yet-entertaining side, follow Pollok FC in the sixth-tier of Scottish football. They're on track for promotion too, so don't be late for the bandwagon.