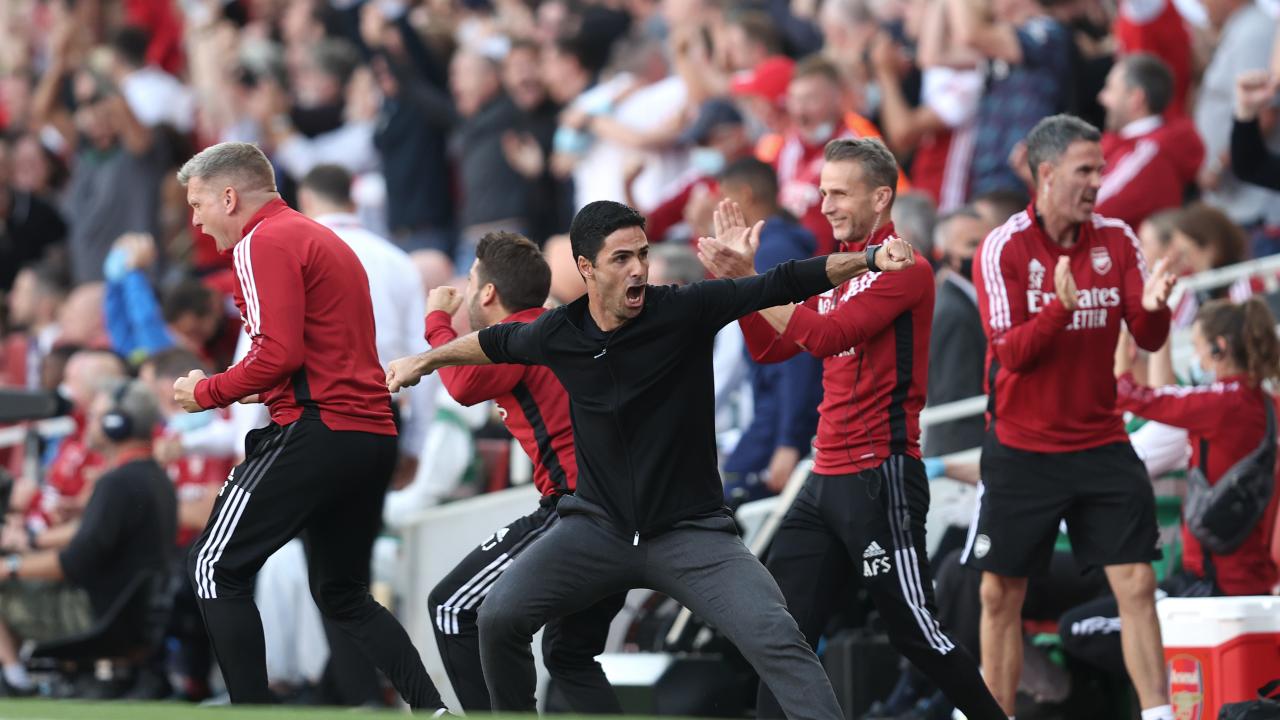 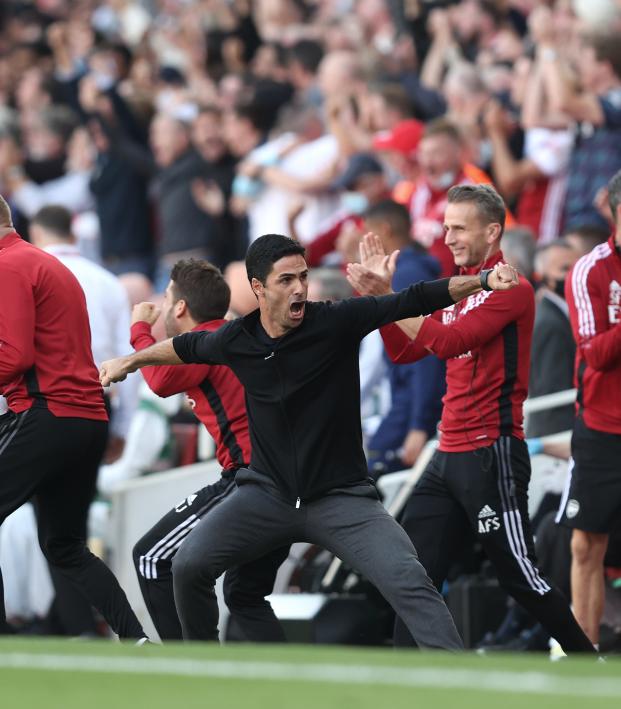 All Or Nothing: Arsenal Review — A Proper Rollercoaster Of Emotion

Let’s be honest, Arsenal fans have had a tough decade. After achieving unprecedented success in Arsène Wenger’s early years, the club fell from one of Europe’s elite to merely content to play in the Champions League to completely failing to qualify for any European competitions.

In the 2021-22 season, Arsenal supporters were taken on the wildest of rollercoaster rides; the first season without European football in a quarter century was met with incredible highs and stupefying lows.

And we got to see it all on “All Or Nothing: Arsenal,” the latest installment in Prime Video’s standout sports docuseries, one every soccer fan should watch after the final episode was released Thursday.

All Or Nothing: Arsenal Review

Let me get this out of the way: I consider myself an Arsenal fan. I’ve followed the club closely since Emmanuel Eboué was flying up and down Wenger’s right flank. Like most Americans picking a Premier League club to follow, I came to the team by chance — I liked playing as the Gunners on FIFA. I would never use “we” to describe the club, acknowledging that just because I watch every week and attended one match in person five years ago, I have no legitimate connection to the club other than picking them as “my team” in Europe.

With that said, I dreaded watching All Or Nothing: Arsenal, because I knew all too well how it was going to end. (Spoiler alert: in tears.) I watched live week after week as Mikel Arteta turned the youngest team in the Premier League from bottom dwellers after three weeks to contending for the top three, only to throw it all away in the most painful of manners, in a 3-0 self-destruction against archrival Tottenham, condemning Arsenal to Europa League when Champions League qualification was there for the taking.

I knew I was going to cry at some point reliving that enigmatic season; I didn’t know I was going to be crying tears of joy over just how lovely it was to see (most of) the humans who make up Arsenal Football Cub.

I have to admit, I haven’t seen all of the previous All Or Nothing series. I’ve watched bits and pieces of Manchester City and Borussia Dortmund, but I only saw the memes and jokes from other series like Juventus and Brazil.

I preface that to say I’m not familiar with how humanizing the All Or Nothing: Tottenham series may have been for folks like José Mourinho and Harry Kane. What I can say is even after following this team for years, All Or Nothing: Arsenal gave me a new appreciation for how likeable most of the figures are at Arsenal.

I’ve never had an English Premier League team that I support, but after watching the latest All or Nothing series on Amazon, it just might become Arsenal. pic.twitter.com/SuNKyzByXh

I say most because there are two notable exceptions to the rule: Josh Kroenke and Thomas Partey.

Kroenke is the bearded bro given control of the club by his obscenely wealthy father, Stan Kroenke. Josh’s face and words scream entitled piece of shit every time he pops up on screen, even if he does show some intuition (or maybe laziness) by sticking with Arteta through the opening three losses of the 2021-22 season. To be fair, if my mommy and daddy were as rich as Josh’s, I’d probably be an overconfident twat too.

Then there’s Partey, who was almost entirely left out of the series. Despite him being a starter the entire season when healthy, I can’t remember a single scene in which he was the focus, with the exception of the medical staff discussing his injury that coincided with a late-season tailspin. The reason for this is probably based on rumors discussed here.

These two figures stand in sharp contrast to the rest of the club, with players and coaches coming off as sincere, likeable young people. (Most humans are sincere and likeable once you get to know them, but that won’t stop people from hating others.) Arteta in particular showed why the club has put so much faith in him — and it’s not for his fantastic artwork.

Losing it at Arteta showing this drawing to a group of grown men pic.twitter.com/wD6kKfylbW

(That’s a heart and a brain holding hands, obviously.)

Premier League fans have heard Arteta is a tactical prodigy, but All Or Nothing showed he can be an inspiring leader as well. Bukayo Saka is portrayed as a resolute young man responding bravely to his heartbreaking penalty miss in the Euro 2020 final. Assistant coach Carlos Cuesta is a damn phenom whisperer who could convince me I could do a standing quadruple backflip. Even Granit Xhaka comes off as a loving family man who just happens to commit random acts of violence on the pitch.

We got to see behind the scenes of Pierre-Emerick Aubameyang’s shocking exit and learned how Kieran Tierney injured himself stepping out of the shower. We saw Arteta rip into Nuno Tavares one game and praise him the next. We saw more awful drawings from Mik.

For me, the best part of All Or Nothing: Arsenal was getting to see these players and coaches when they’re not just answering the same boring questions from the media. Even directors like Edu Gaspar, Vinai Venkatesham and Richard Garlick were displayed as thoughtful stewards of the club, even if they left the squad with the depth of a kiddie pool in the second half of the season.

While the joy came from seeing these players behind the scenes, the drama of All Or Nothing came from the absurdity of Arsenal’s 2021-22 season.

The Gunners opened the campaign with three straight defeats, sitting bottom of the league table with zero goals scored after three weeks (Manchester United fans, take note). The sky was falling, but, in his only decent moment of the series, Josh Kroenke backed Arteta, telling him to keep at it. Arsenal then went 11 unbeaten in all competitions, then lost three of four, then won nine of 11. Up and down the season went, All Or Nothing’s crew following all the while, showing intimate moments of hardship and success in equal measure. For every Aubameyang bringing darkness to the club there’s an Eddie Nketiah overcoming adversity to triumph on the pitch.

After three straight defeats to Crystal Palace, Brighton and Southampton, Arteta was on the verge of tears calling it a “funeral” to his charges. But in a show of just how rocky the season was, things only got wilder, with four straight wins — including back-to-back two-goal conquests of Chelsea and Manchester United — undone by devastating back-to-back defeats to Tottenham and Newcastle.

I should have turned off the TV after Episode 7 (of 8). I knew only pain was in the final chapter. To the credit of the All Or Nothing production, I kept going. After the loss to Newcastle came, in hindsight, the funniest moment of the series.

“You never know what happens in football,” Arteta told his team in the locker room of St James’ Park. “They (Spurs) might lose at Norwich.” 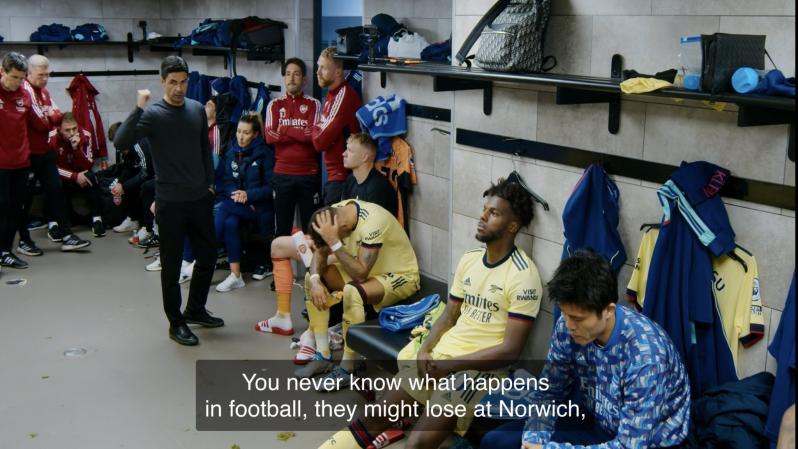 Despite a season with so much promise, Arsenal failed to qualify for the Champions League, and it was impossible to hide the failure in All Or Nothing. But that’s what made this series so enjoyable, seeing how these young men responded to heartache time after time, often with uplifting periods of some of the best football in England from teams not named Liverpool or Man City.

The 2021-22 campaign was the perfect example of football — and life — at its finest. There are highs, and there are lows. In the end, it’s not about the journey, nor to Alexandre Lacazette’s chagrin the destination. It’s about the friends you make along the way.