Just How Bad Was The USMNT Offense Against Panama? These Stats Say It All

Travis Yoesting October 11, 2021
The abominable performance against Panama has the U.S. once again struggling in World Cup qualifying.

Maybe the USMNT should just stop playing on Oct. 10. It never ends well, and 2021 was no different, the U.S. suffering a pitiful 1-0 defeat to Panama. Reexamining the USMNT vs Panama stats a day later, it’s shocking just how bad Gregg Berhalter’s team was.

The USMNT’s World Cup qualifying campaign is not in shambles, as r/ussoccer would have you believe. Berhalter’s job isn’t in serious jeopardy at the moment, despite calls for his head. But the U.S. was horrific on Sunday, both via the eye test and the statistical analysis.

So bad were the Americans that all momentum built from back-to-back qualifying wins has completely disappeared ahead of what is now nearly a must-win home game against Costa Rica on Wednesday.

Here are some of the more damning stats from the USMNT’s appalling performance in Panama.

USMNT vs Panama Stats — Why The U.S. Lost

Before the match even kicked off, a statistic looming even larger than the date was the USMNT’s starting lineup. Berhalter made seven changes from the side that beat Jamaica 2-0, with just Matt Turner, Walker Zimmerman, Yunus Musah and Paul Arriola retained.

While rotating the squad isn’t necessarily a bad thing with three qualifiers in seven days, the players Berhalter did start were clearly not up to the task. Sebastian Lletget couldn’t maintain possession, fullbacks Shaq Moore and George Bello neither defended nor got forward well and Gyasi Zardes would’ve been completely invisible if not for his blond-streaked hair (and that ugly own goal). Those players performed well during the Gold Cup, but World Cup qualifying is a totally different beast, and they (along with Berhalter) were not good enough on Sunday.

There is a risk Berhalter is rotating his squad too much, relying too much on depth he thought he had built during this summer’s Gold Cup win. But when the matches are this important, it’s almost inexcusable to not have more of the team’s best players on the pitch, even with the current injury woes (Christian Pulisic, Gio Reyna).

How much rotation is needed? Well, the #USMNT is playing their A, B, and C players while everyone else is playing their A and B players. It’s unnecessary and it’s causing us major problems. pic.twitter.com/q5rYWhCMA9

As for the match itself, here’s a quick rundown of the basic USMNT vs Panama stats. 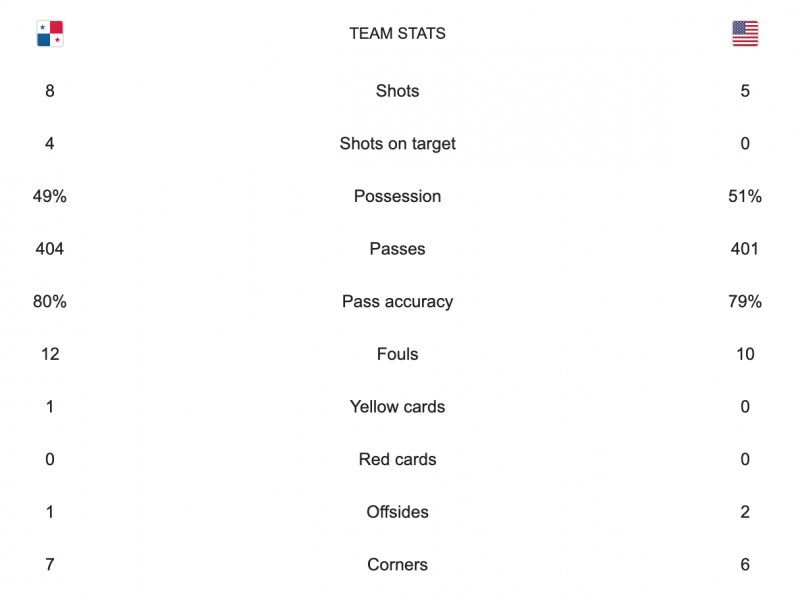 The most shocking disparity in the entire match was the difference in shots; the U.S. took five, with none hitting the target. It took a few big saves from Turner just to keep the match close.

The five shots were the fewest from the U.S. in a World Cup qualifier since recording one shot in a 0-0 draw against Mexico at the Azteca in 2013. Additionally, it was the fewest shots in 40 games under Berhalter.

The five #USMNT shots tie the team's fewest in 40 games under Gregg Berhalter.

Another interesting stat shows just how bad the U.S. was at winning possession high up the pitch. The Americans averaged eight possessions gained in the attacking third in the first four qualifiers; it happened just once against Panama.

The most damning stat to me was the linkup between starting midfielders Lletget, Musah and Kellyn Acosta. The trio completed just 11 passes to each other in the first half before Musah was replaced by Tyler Adams to start the second half. That’s less than a third what Adams, Weston McKennie and Musah completed to each other in the first half against Jamaica, a match that didn’t really kick into gear until the second half.

The #USMNT midfield trio (Acosta, Lletget, Musah) completed 11 passes to each other in the first half.

Against Jamaica, the midfield three (Adams, McKennie, Musah) completed 36 passes to each other in the first half.

When your midfielders are completely incapable of playing together, is it any wonder the U.S. couldn’t figure out a way to maintain possession and start attacks? Too often the USMNT couldn’t build out of the back and resorted to aimless long balls toward offensive players who were never going to win possession. I was surprised the referee didn’t add more stoppage time at the end after the countless minutes wasted by Panama (and its fans), but if we’re being honest the U.S. probably would have needed 90 more minutes to score.

The fact that Panama could press with two and control the U.S.’s two CBs, GK, and 6 was a bit of a problem. pic.twitter.com/Mekk6dJiW6

All of the stats added up to a 1-0 defeat, the first time the U.S. has lost to Panama in World Cup qualifying and just the nation’s second defeat to Panama ever (2011 Gold Cup group stage being the other).

Finally, let’s finish with the stat with which I began this article.

The U.S. lost for the third straight time on Oct. 10. Before Sunday, the last Oct. 10 match came on that fateful night in Couva four years ago, the 2-1 defeat to Trinidad and Tobago that consigned the Americans to missing the 2018 World Cup. In 2015, the USMNT lost to Mexico 3-2 in the Concacaf Cup, a one-off to determine which team went to the next Confederations Cup. Also that day, the U-23 squad was knocked out of qualifying for the 2016 Olympics.

The U.S. was seemingly doomed from the start, though Berhalter’s starting XI sure didn’t help.

Fortunately, there is still one more stat that shows all hope is not lost. Despite a tepid eight points from the first five matches, the USMNT is still second in the eight-team table, with more home games than road games left on the schedule. Because so many other matches have ended in draws — half of the 20 played — fewer points are on the board than there might otherwise be, which might be the USMNT’s saving grace.

This is where each team stands after today's #CWCQ Final Round matches. Are there any surprises? Comment pic.twitter.com/P7YtbkHp5v

This means that, despite all the outrage over the pathetic performance vs. Panama on Sunday, the USMNT still controls its own destiny, and there’s nothing more important than that when it comes to World Cup qualifying in Concacaf. That is, unless the USMNT has to play another qualifier on Oct. 10, 2022.