USMNT player ratings vs. Japan: We're better than this (hopefully) 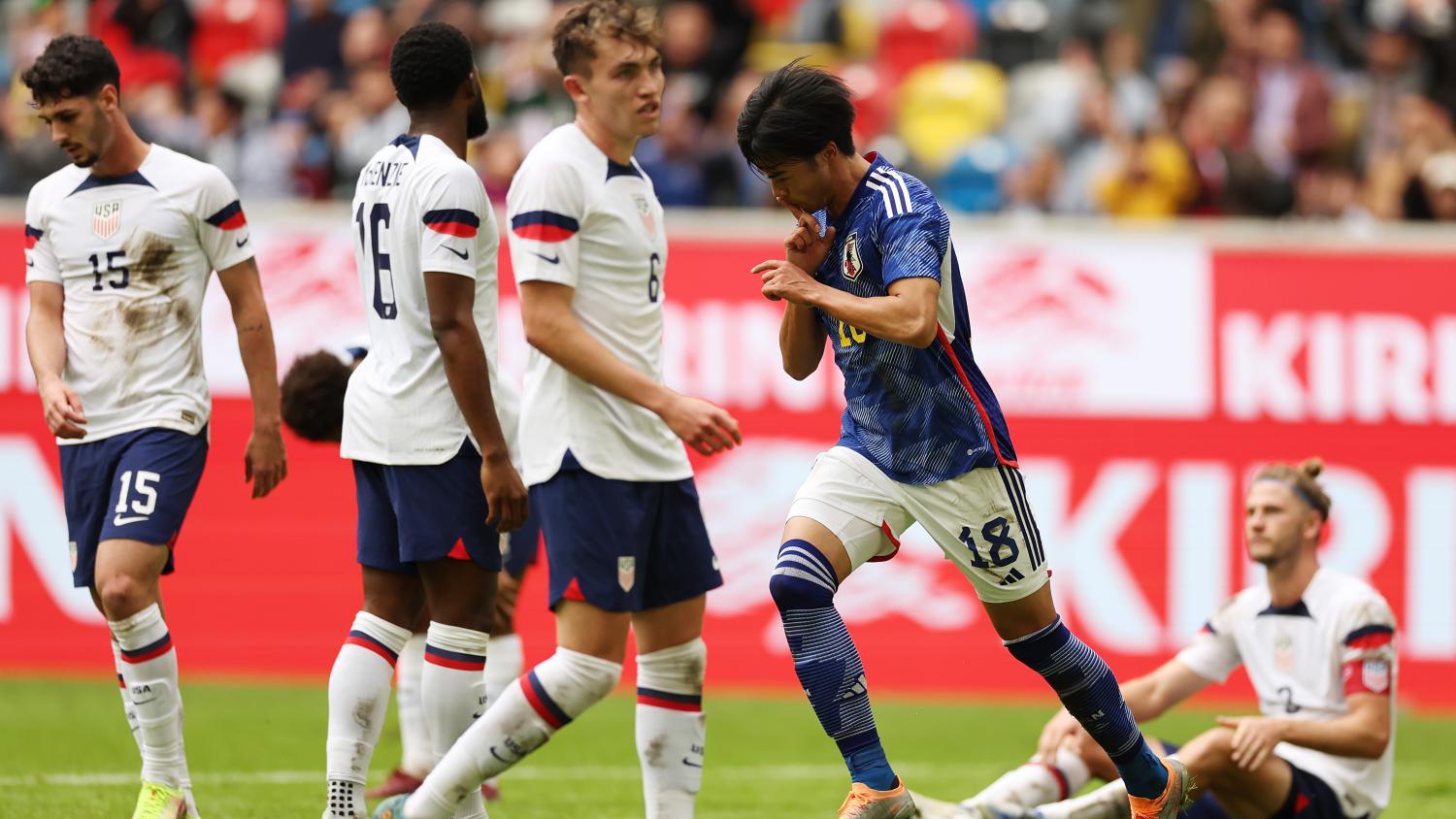 The idea of the U.S. going against England's high press is now terrifying.
Getty Images

This USMNT team is very young; they'll be the youngest at Qatar. Sometimes they look like serious 2026 World Cup contenders, sometimes they look lucky to have qualified for the 2022 tournament. Friday's 2-0 loss to Japan was a look at, as we outlined in our match preview, many of the worst-case scenarios for this team.

The philosophy of building from the back couldn't have gone worse. In the opening 45, according to the ESPN broadcast, the U.S. turned it over 40 (!!!) times in its own third. At the other end of the pitch, the U.S. failed to land a single shot on target over the entire 90 minutes.

Matt Turner (90 minutes): 8 — The U.S. man of the match with six saves, and the Arsenal backup pulled off a couple stunners to keep it at a respectable 2-0 when it could've been four or five for Japan. He'll be starting at the World Cup, and he's also going to see a lot of action in the buildup with the Gunners playing in the Europa League and EFL Cup.

Sam Vines (90 minutes): 5 – Vines escapes criticism from the first-half horror show simply because he wasn't trusted in possession. He very rarely got out of the U.S. half (although he still didn't manage to win a duel), and his most preferred passing options were a back-pass to Turner or sideways ball to Long.

Walker Zimmerman (90 minutes): 4 — He made a couple blocks and challenges defensively that helped repel Japan, but it was also Zimmerman himself who invited Japan forward with poor distribution from the back. This pass was particularly pathetic.

Sergiño Dest (45 minutes): 5 - The classic Dest story. Looked good getting forward and provided the cross that Ferreira should've done better with, but frequently overdid it inside his own half and put the team under needless pressure.

Weston McKennie (67 minutes): 3 - It's difficult to recall a worse game in a U.S. shirt from McKennie. He was at fault for Japan's opener in the 24th minute with the sort of pass that, if made while playing for Juventus, lands you on the bench for three months. He began play as the team's midfield operator, and then hit passes at a 69.2% clip. That's really, really bad, so he was later ostracized up top as an outlet for hopeless punts forward.

Tyler Adams (90 minutes): 6 - Adams wasn't as godawful in possession as his midfield partners, but he was frequently left without options and occasionally took the wrong one. He also wasn't at his best as "The Terminator" — his duel success rate (20%) was miles away from what he's been enjoying with Leeds.

Luca de la Torre (67 minutes): 4 - Is De la Torre cutout for this level of international play? Everything seemed to be passing him by in midfield as he marveled at the speed and quality of Japan. Didn't seem on the same wavelength as Aaronson in applying the press, and he couldn't really find his pockets to assert his typical rhythm on the game.

Gio Reyna (45 minutes): 7 - Didn't do a whole lot, but Reyna was on another level from his teammates with the ball at his feet. He breezed by his marker out wide early, relieved pressure with a skillful flick that drew "oohs" and "aahs" from the crowd and hit the target (Zimmerman) with a set piece when everyone else routinely seems to screw up dead balls. Was smartly taken off at half to be wrapped in wool.

Jesús Ferreira (45 minutes): 2 — Not involved at all with very few touches and only 55% pass success, but the one glaring moment was an unmarked header in front of goal that he blooped harmlessly over.

Brenden Aaronson (90 minutes): 6 - Was involved in more duels than any U.S. player, suffered three fouls and was most frequently found in a crumpled heap on the floor, but he kept after it. In the end, it was a lot more effort than effectiveness, as highlighted by a juking, jinking run at Japan's defense that ended with a shot that went five yards wide.

Reggie Cannon (45 minutes): 4 - He was doing good! Cannon brought some defensive balance to the side! Then Brighton's Karou Mitoma squared him up, drove at him, kept going and curled one inside the far post for Japan's second. Damn.

Mark McKenzie (45 minutes): 6 - Didn't pass the ball to Japan time after time. I admire that.

Josh Sargent (45 minutes): 5 — Wasn't much more involved than Ferreira, but he didn't miss any chances because he didn't attempt any shots.

Johnny Cardoso (23 minutes): N/A - Not the greatest opportunity to get out there and strut your stuff.

Malik Tillman (23 minutes): N/A - Unable to put the U.S. on the front foot going forward, but he won a couple tackles.