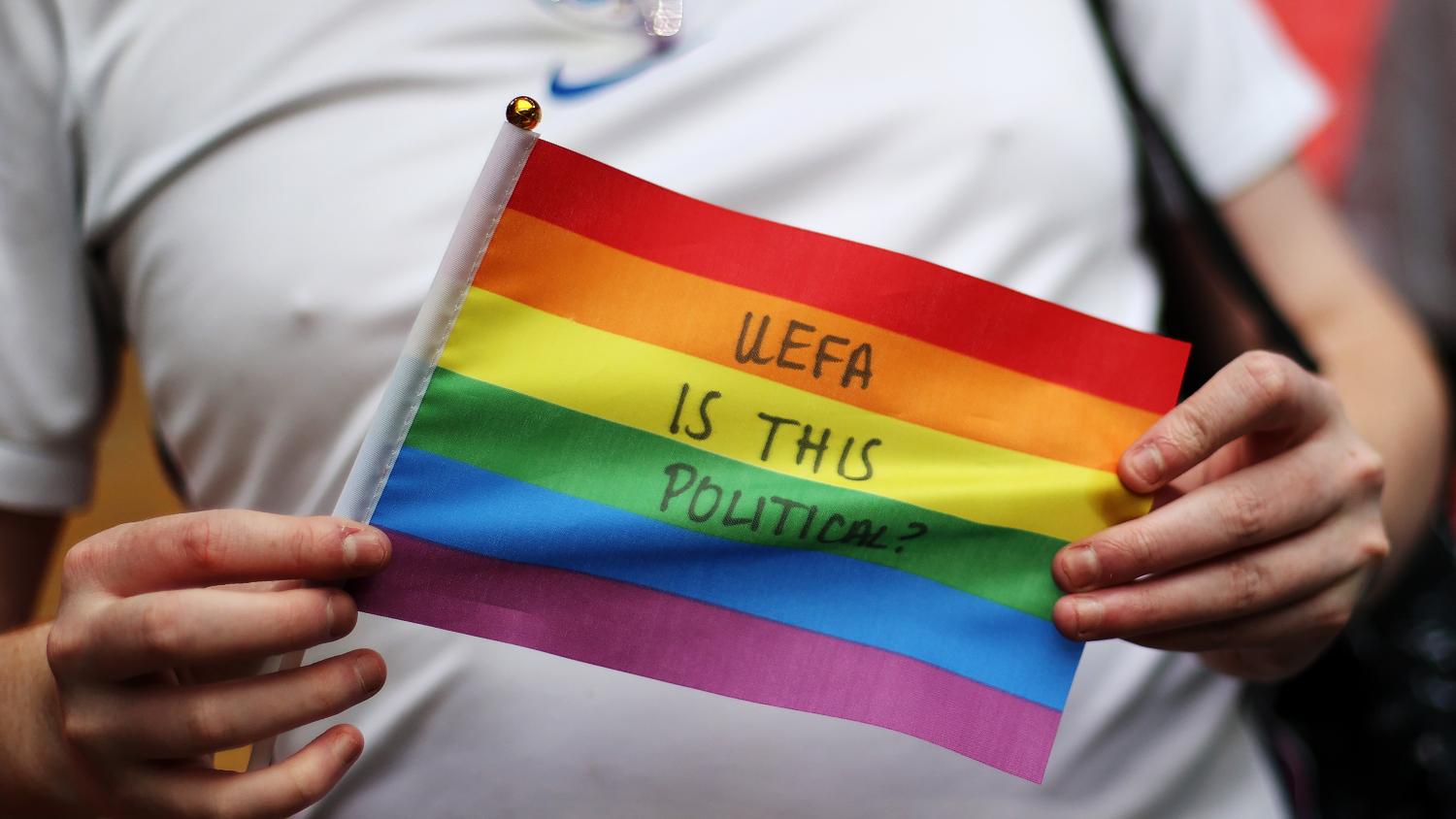 UEFA, feckless as usual, has proven once again to not give a shit about human rights.
Getty Images

UEFA likes to claim it supports human rights — until there’s any sort of pushback. Europe’s football governing body once again showed how fucking feckless it is by banning rainbow ads at Euro 2020 quarterfinals in Saint Petersburg and Baku.

UEFA has twisted itself into knots during Euro 2020 trying to appease human rights advocates while also not pissing off member nations with anti-LGBTQ+ legislation. By holding the tournament in countries across Europe, UEFA has found different governments to be less than accommodating for certain human rights issues, especially those revolving around Pride Month, which celebrates the LGBTQ+ community.

Throughout Pride Month, UEFA repeatedly stated its devotion to human rights, but it’s hard to take those claims at face value when the organization has repeatedly backed down to pressure from governments who do not want their citizens to be allowed to love whoever they want.

When Munich wanted Allianz Arena lit up in rainbow colors for a Germany-Hungary match, UEFA said no, claiming it would be a political statement because Hungary has anti-LGBTQ+ legislation, including a recent law that has sparked outrage across much of Europe. Was the request for rainbow lights in response to Hungary’s inhumane laws? Probably, but it only really became political because Hungary and UEFA wanted it to be to fit their narrative.

Ultimately, Allianz Arena did not light up in rainbow colors, but rainbow flags flew high across Germany in defiance. A few days later, rainbow ads were strewn around the Puskás Aréna in Budapest, UEFA apparently fine with rainbow colors in Hungary so long as they make money from VW, TikTok and other sponsors.

The issue took a dark turn this week when UEFA actually banned rainbow ads at Euro 2020 quarterfinals in Saint Petersburg and Baku. After weeks of rainbow ads across the venues at Euro 2020, UEFA decided it would rather appease Russia and Azerbaijan than stand for human rights.

“UEFA fully supports the display of such messages of tolerance and respect for diversity, which were already displayed in all stadiums at all round of 16 matches and will be displayed by UEFA’s partner Volkswagen at the UEFA Euro 2020 quarterfinal matches in Munich and Rome,” UEFA said in a statement on Saturday. “UEFA requires its sponsors to ensure that their artwork is compliant with local legislation and we understand that this is not the case in Baku and Saint Petersburg.

“UEFA will however continue to highlight its fight against all types of discrimination through its Equal Game campaign across all stadiums in all remaining matches. All other sponsors decided not to use rainbow artwork any longer in the tournament, with pride month having come to an end.”

What the actual fuck, UEFA? You really expect people to believe you give a shit about human rights when you turn and run at the first sign of pushback? You can’t claim one thing, do the other and expect anyone to take you seriously. Soccer should be about spreading the beautiful game and human rights, not encouraging the spread of hateful bigotry.

“UEFA’s audacity and deceit are boundless,” said Alfonso Pantisano, spokesperson for LSVD, a LGBTQ+ rights association in Germany. “With this action, it is betraying not only lesbians, gays, bisexuals, trans and intersex people in Azerbaijan and Russia, but also in the whole of Europe.”

UEFA, like FIFA, is all about money and self-promotion. It can talk all it wants about human rights, but when it comes down to it, they’re only interested in the bottom line.

I can imagine if FIFA was around in the early 1800s, they would have used these same excuses to host a World Cup in the U.S. despite the country’s insistence that slavery was acceptable. I know this because FIFA is hosting the 2022 World Cup in Qatar, which essentially has the modern equivalent of slavery.

The bottom line is that the rainbow flag is about human rights and is not political — that is not up for debate (no, you can’t argue that it is intolerant to not allow intolerant views). Denying LGBTQ+ rights is no different than denying humans rights based on the color of their skin.

UEFA does not seem to understand this. They’re just fine with countries discriminating against large portions of humanity, so long as it doesn’t affect their paycheck.

It’s disgusting, but by no means surprising.