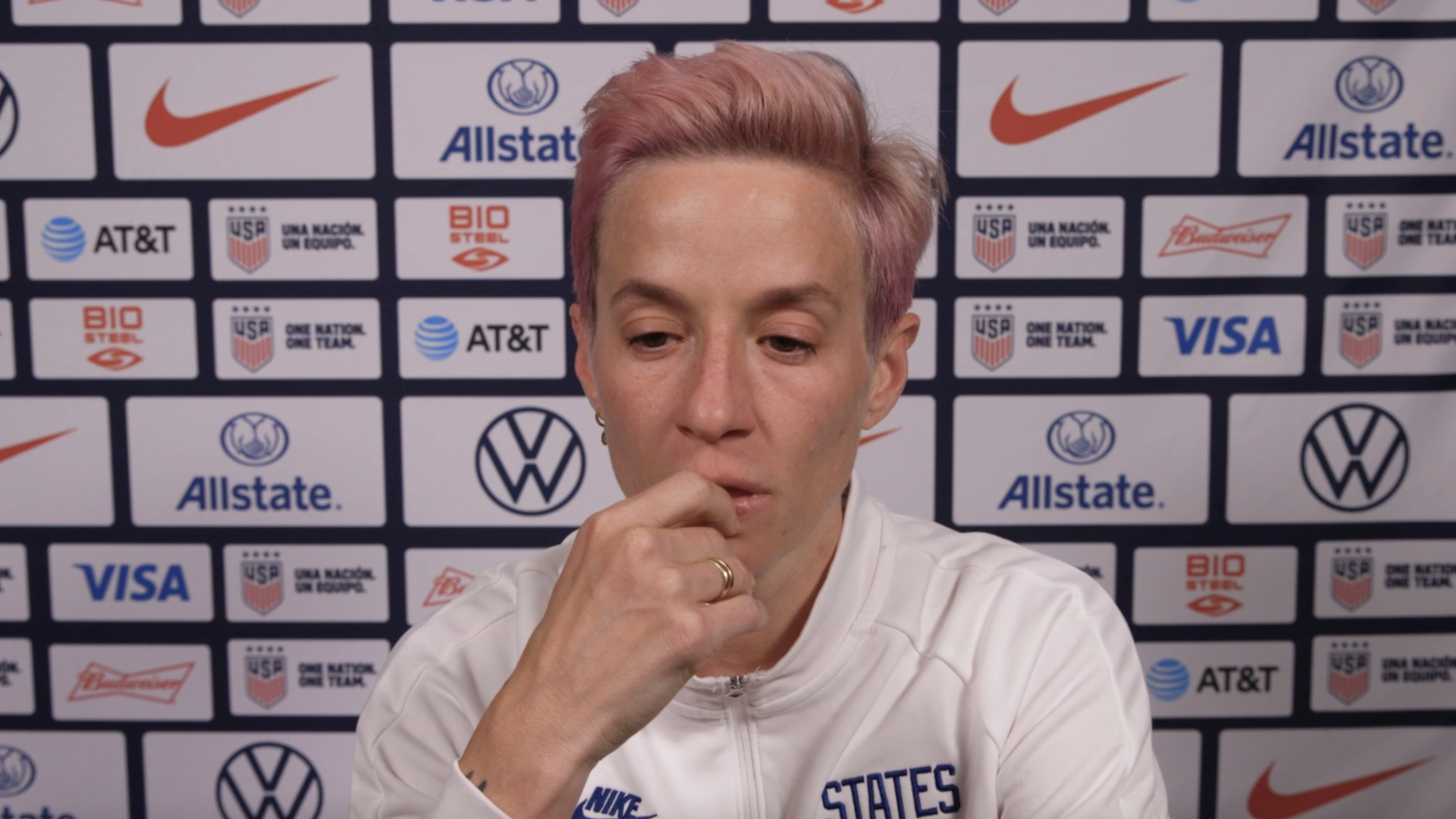 Rapinoe says this is not a women’s issue, it’s an everybody issue.
U.S. Soccer

The USWNT plays Colombia in a friendly on Saturday and spoke to the media Friday ahead of the game. Originally only head coach Vlatko Andonovski and Lindsey Horan were supposed to be interviewed, but Megan Rapinoe took center stage. The Megan Rapinoe Roe v Wade speech to the media on Friday was emotional.

Rapinoe began with a nearly nine-minute rant, tirade, whatever you want to call it on her initial reaction and thoughts to the Supreme Court’s ruling to overturn Roe v Wade. After she finished talking, she answered three questions from media. All together she spoke for around 20 minutes.

Here were her best quotes and the full interview broken up into 14 different parts.

1. “I wish that we could just talk about soccer today. But obviously with the ruling on Roe v Wade, that takes precedence over everything. It's hard to put into words how sad a day this is for me personally, for my teammates, for just all of the people out there who this is going to affect.”

2. “It stops people from having safe abortions. I would encourage people to understand all of the different aspects that overturning Roe v Wade will have on so many … actually on everyone in the entire country. I just can't understate how sad and how cruel this is. I think the cruelty is the point, because this is not pro-life by any means.”

3. “The makeup of the court is ill-equipped to handle this kind of decision. Frankly, a majority male court making decisions about my body or any other woman's body is completely misguided and wildly out of touch with the desires of the country, the will of the country and the will of the people. And I think they acting incredibly irresponsibly and inappropriately.”

4. “I absolutely think gay rights are under attack. I absolutely think we will see legislation pop up state by state by state that will eventually come to this radical court. I have zero faith that my rights will be upheld by the court. I have faith in our country and I have faith in people and I have faith in the voters. And if you ever needed a fucking motivation to vote, to get involved. Quite literally people's lives depend on it. Like actual lives, we're talking life and death, and also, you know, your life in terms of what does it mean to even be alive if you can't be your full self, like what the fuck is the point?”

5. “If not for men, we would have none of these laws. We would have none of the inequality in terms of gender rights and this sort of onslaught on abortion rights. None of this would be happening. We did not do this ourselves. And I would take it personally, what I'm saying as an accusation, as a come to Jesus moment, as a look in the mirror.”

Megan Rapinoe gave an emotional speech to media today on the Supreme Court's decision to overturn Roe v Wade. Here is how she opened up.

Rapinoe shares what she thinks the differences are between pro-life and pro-choice.

"Pro-life doesn't allow anyone to make a choice. pic.twitter.com/kcZwT7eBSa

PART 4/14
Rapinoe touched on other current policies she says contradicts the idea of being pro-life. pic.twitter.com/R4Gl8c0zPT

PART 6/14 (only 14 parts, mistake in the last tweet)
Rapinoe says the Supreme Court is "wildly out of touch" and ill-equipped to make this decision to overturn Roe v Wade. pic.twitter.com/3N2m8aqDtJ

PART 7/14
Rapinoe comments on how this decision will have effects on racism, homophobia and transphobia in the country. pic.twitter.com/Vlr3SxG0n9

PART 9/14
Rapinoe says she thinks that gay marriage, trans rights and women's rights are all under attack. pic.twitter.com/fB5MFIFaIy

PART 10/14
Rapinoe answers @thrace question on the impact overturning Roe v Wade will have on the queer communities and also adds: "I have zero faith that my rights will be upheld." pic.twitter.com/0guxgwGkgj

PART 11/14
Rapinoe talks about how she will fine because of her status and resources but worries about how this ruling will impact those not as fortunate. pic.twitter.com/ueGUHyMGmp

PART 12/14
Rapinoe answers @GrantWahl question about playing in states with anti-abortion laws in the future and in Utah next week. Rapinoe says, "we're not protesting the game." pic.twitter.com/QqWbJooh3R

PART 13/14
Rapinoe answers @thegoalkeeper question on what men can do to help women in this moment. pic.twitter.com/d9kXnhfU7E

PART 14/14
Rapinoe's final comments with the media.
"This is not a women's issue, this is an everybody problem." pic.twitter.com/m3DKr9XKRg