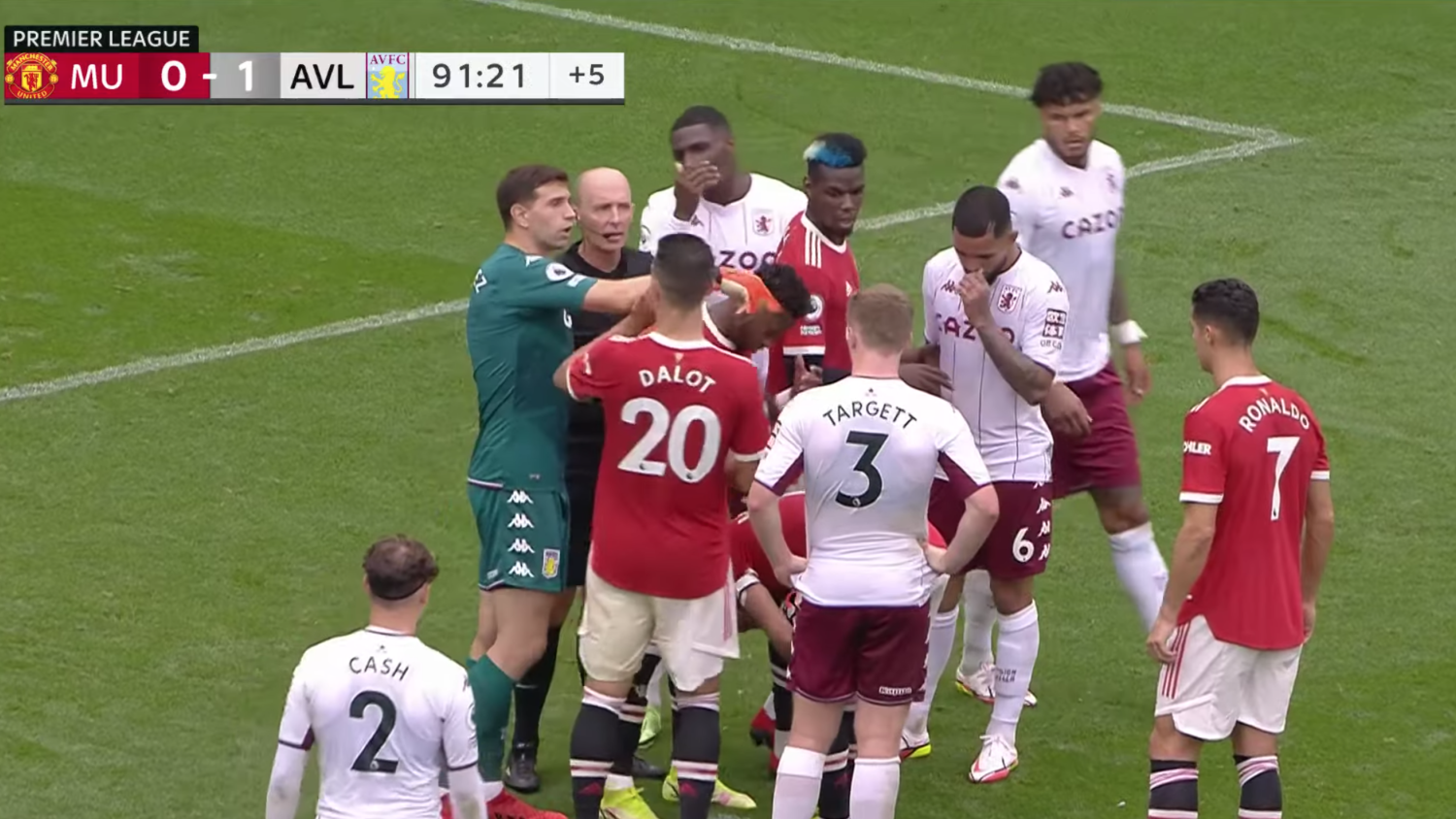 Emi Martínez became an absolute legend during this summer’s Copa América. As Argentina’s keeper, he taunted and shithoused his way to a shootout victory over Colombia in the semifinals on the way to helping Lionel Messi claim his first major international trophy. On Saturday, Martínez was back at it, taunting Cristiano Ronaldo before the last-minute Bruno Fernandes penalty vs Aston Villa flew into the Old Trafford faithful.

Villa claimed a memorable 1-0 victory over Manchester United on Saturday thanks to an 88th-minute winner from Kortney Hause. But the three points were in jeopardy until the final whistle as the Red Devils were awarded a late penalty. (Of course they were awarded a penalty, will you shut up now, OGS?)

Last year, Fernandes was the undisputed penalty taker for United and with good reason. The Portuguese maestro strikes the ball as well as anyone in the Premier League. But with Cristiano Ronaldo joining the club — Penaldo as Messi fanboys love to call him — many expected the top all-time men’s international goal scorer to take over penalty duties.

When it became clear Fernandes would be taking the spot kick, Martínez stirred the pot, pointing at Ronaldo seemingly saying he wanted the No. 7 to take the shot. Almost the entire Villa team was involved in the late-game antics, but it was led by the keeper, who clearly got into the head of Fernandes.

In the end, it worked brilliantly, with Fernandes hitting one of the worst penalties since Dani Rojas accidentally killed Earl.

To top it all off, Martínez did a funny little dance in celebration. It wasn’t quite as good as his Hingle McCringleberry hip thrusts against Colombia, but it was a great moment for Aston Villa.

Manchester United had the chance to tie it from the spot in stoppage time, but Bruno didn't convert.

After the match, United coach Ole Gunnar Solskjær was upset at Villa’s hijinks, but considering the Red Devils get more borderline calls than just about any team in the world I don’t think he can have too many complaints.

“Bruno has been such a good penalty taker,” Solskjær told reporters. “You would back him with your mortgage. What I did not like to see was the way they crowded the penalty spot and the referee to try to affect Bruno. It clearly worked for them but that is not great to see. They achieved what they wanted to.

“That’s football. Bruno will step forward every week but sometimes it does not go your way. It is such a fine line between heaven and hell.”

As for why Fernandes took the penalty instead of Ronaldo, OGS had this to say.

“Cristiano has probably scored more penalties than anyone else in world football,” Solskjær said. “We have two great takers there; it is just a missed opportunity today.”

I have a feeling Ronaldo will be taking all future United penalties.

Here are the full-match highlights as United is now in a five-way tie for first on 13 points, though Liverpool has a game in hand. Villa is in eighth with 10 points. Meanwhile, Martínez’s old club, Arsenal, is back in 13th ahead of the North London Derby on Sunday.

One last note: It was cool to see Andres Cantor call the match in English, but it was unfortunate NBC chose to only put that match on Peacock. I get Chelsea-Man-City was the bigger match and deserved to be on NBCSN, but maybe the United-Villa game could’ve been put on USA Network or CNBC if Americans were getting the first-ever Premier League match the legendary Cantor has ever called in English.