Travis Yoesting June 27, 2022
Haley Carter received threats of violence against her and her family after a social media campaign was spearheaded by a failed politician.

Haley Carter is a former Marine, former Houston Dash goalkeeper and former assistant coach for the Afghanistan women’s national team. She’s an attorney with degrees from the Naval Academy, University of Liverpool and University of Houston’s law school. The lifetime Girl Scout has received many military medals after serving two tours in Iraq and started a program with the Dash to honor female veterans and servicemembers. She’s a mother.

According to one failed politician, however, Haley Carter has no right to be the Grand Marshal of a local Independence Day parade.

Carter, a native of the Houston suburb of Friendswood, stepped down as Grand Marshal of Friendswood’s July 4 parade after a harassment campaign was led by a national podcast/radio host. The harassment led to violent threats against Carter and her family after political podcaster Jesse Kelly posted photos of Carter’s child on social media.

This year’s selected Grand Marshal, Haley Carter, has voluntarily stepped down after receiving threats of harm to herself and her family and will not be participating in any of the Fourth of July activities. There will be no replacement Grand Marshal. pic.twitter.com/djAcmjtTR9

This is America, where a military veteran receives threats of violence simply for standing up for human life.

Haley Carter spent three years with the Dash as a backup goalkeeper after her military career, though she never appeared in a match. She then joined the coaching ranks, first at the college level in Texas then with the Afghanistan women’s national team and now with the Antigua and Barbuda women’s national team. In Afghanistan, she helped players speak out against institutionalized sexual abuse and later helped players and staff evacuate the country when the Taliban took control last year. Little did she know, she would soon be subjected to Taliban-esque attacks back home.

Carter is, by many measures, a national hero. If her military honors weren’t enough, she’s taken an active role in her community, chairing Houston Mayor Sylvester Turner’s Commission Against Gun Violence. Turner, in fact, called Carter an “American hero” and role model when he appointed her to that position.

“Simply put, Haley is the best of us,” the Houston Mayor said in a statement on Thursday. “It is no wonder that her hometown of Friendswood chose to honor her in their Fourth of July parade. Haley embodies everything the uniquely American holiday represents. Freedom. Independence. Love of country. In other words, the perfect Fourth of July grand marshal.

“Unfortunately, some have threatened violence against Haley and her family because of her strength, her belief in equality and her leadership in trying to reduce gun violence here in Houston. But they have failed. Haley will continue to move forward and make positive changes as she has always done.”

So how did this all happen?

It all started on Wednesday when conservative podcaster Kelly — a failed congressional hopeful and former RV salesman, as the Houston Chronicle described him — sent out a tweet to his 500,000 followers calling for action against a former Marine. Kelly decided Carter, despite all her honors, wasn’t worthy of serving as Grand Marshal of a local July 4 parade.

Because Carter supports the human right to be and love who you want.

Kelly attacked Carter for being a gun-grabber — Carter promotes gun safety, which I thought everyone supported — and supporting LGBTQ+ rights. Disturbingly, Kelly posted a photo of Carter’s child in his call for action. 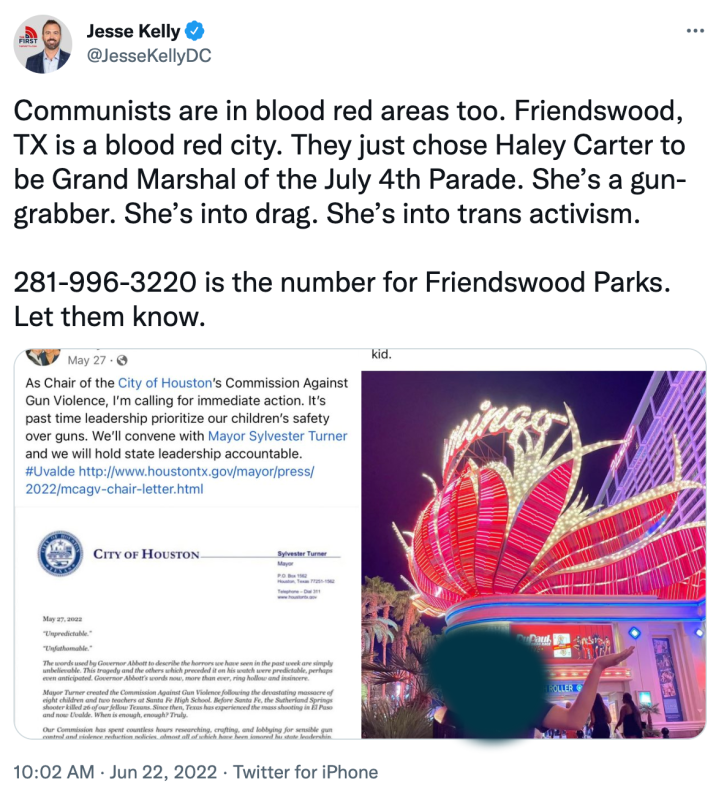 Note: We blurred out the child’s face in this image. Twitter has not taken down the tweet despite it resulting in threats of violence.

I’m not sure what about promoting gun safety, enjoying lively entertainment and promoting LGBTQ+ rights make Carter a communist; Kelly might need to look up communism in a dictionary. Please reach out to me if you can explain this line of reasoning.

What is clear is Kelly’s attacks on Carter’s family are cruel and unjustified. Carter and her family posed no threat to anyone. She simply wanted her community to be safe from gun violence and she doesn’t want government involvement in people’s personal lives, which used to be a conservative ideal.

Sadly, Kelly’s followers ate it up and began attacking the war veteran and her family. Carter received threats of violence so bad she had to pull out of serving as Grand Marshal for the July 4 parade for her safety and the safety of her family. Homophobia and transphobia trumped years of military service. Kelly celebrated the news Carter was stepping down with a violent gif of a man walking away from an explosion.

The Houston Chronicle reported that the extent of the threats of violence were not immediately clear as Carter shut down her social media after her son’s photo was posted by Kelly. But the threats worried the military veteran enough to step down as Grand Marshal.

I often hear when stories like this happen about how progressives in the U.S. are intolerant of those who oppose human rights, as if being intolerant of intolerance is somehow a rational train of thought. Supporting trans lives and LGBTQ+ communities is not an attack on anyone, it is simply desiring a world where everyone is free to live their lives without discrimination. I’m honestly baffled by homophobia and transphobia in this country; what are humans so scared of?

It’s disgusting a former Marine, an NWSL veteran and a mother would be subjected to threats of harm simply for being selected as Grand Marshal for a July 4 parade, and there can be no argument that any of the actions of Kelly and his supporters are at all justified.