Ahead Of Final USWNT Match, Carli Lloyd Haters Took Over The #ThankYouCarli Hashtag 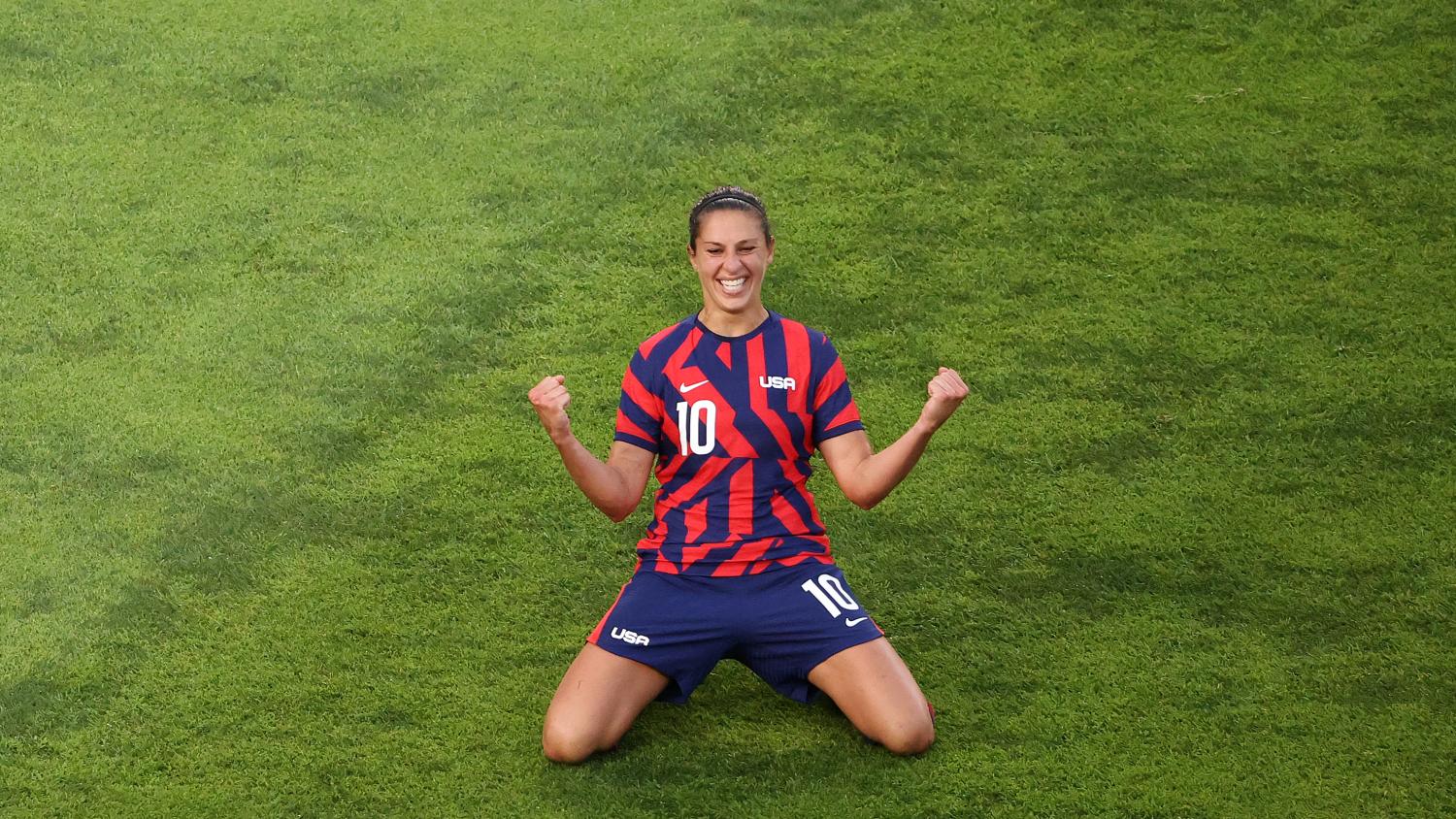 Before she retires, women’s soccer fans want you to know the uncomfortable truth about Carli Lloyd.
Getty Images

What’s the appropriate way to send off a player who has reached heights few before her have achieved? As Carli Lloyd prepares for her final USWNT match, everyone from her male and female U.S. Soccer counterparts to Tom Brady has weighed in on the legendary player. But is it too much? Some people certainly think so, given her uncomfortable, often undiscussed stances on certain off-the-field issues.

It’s hard to understate how impressive Carli Lloyd’s stats are. She’ll retire with 316 caps and at least 134 goals after playing South Korea on Tuesday night, both numbers ranking in the top four in the entire history of international soccer, men’s or women’s. Her place in history is secure by her numbers alone.

But Lloyd is a divisive figure off the pitch, beloved by some, hated by others. Those haters have been out in force in the lead-up to Lloyd’s final USWNT appearance, taking over the #ThankYouCarli hashtag.

U.S. Soccer has done an incredible job amassing farewell videos and tributes for Lloyd. The media team released three Lloyd videos on YouTube just this week and dozens more on Twitter and Instagram. Ahead of her last cap, teammates, USMNT players past and present, broadcasters and for some reason Tom Brady recorded short videos to praise Lloyd’s career.

Here's to the next chapter! #ThankYouCarli

Fox will devote an entire video feed to following Lloyd in her final match. She received lengthy praise-filled write-ups in the Athletic, ESPN, Sports Illustrated, Washington Post, USA Today and the Players Tribune. Pretty much every soccer-related entity from FIFA to Nike has paid tribute. It’s impossible to be a soccer fan right now and not be inundated with Carli Lloyd coverage, even though she’s technically not retiring for at least another week, potentially a month (whenever Gotham FC’s NWSL season ends).

”I was not supposed to be who I became.

It wasn’t in the script.” @CarliLloyd says goodbye to soccer.https://t.co/DZiKyt1uLN

She turned up in the biggest matches, scoring an incredible hat trick against Japan in the 2015 Women’s World Cup final. She was twice named FIFA’s women’s player of the year to go with two World Cup and two Olympic championships. At 39, she can still beat up on Paraguay, having scored five goals in a recent friendly win.

But there are a lot of people who feel like it’s all a bit too much pomp.

Many have wondered why Lloyd is receiving such a grandiose sendoff when other USWNT legends like Abby Wambach and Hope Solo did not receive nearly as much fanfare. Wambach scored at a rate nearly twice what Lloyd’s was while Solo is arguably the greatest at her position of all time (though her past is almost as rocky as Lloyd’s).

Quick question. So when Abby, Lauren, or anyone else retired how come they didn’t get this many posts. Because they were just important/ more important than Carli.

Others have pointed out how little Lloyd has accomplished at the club level. Despite spending more than a decade in the top flight of U.S. women’s club soccer, she never won a league title (though she could change that with Gotham FC this year before she hangs up her cleats for good). She spent three seasons in Houston from 2015-17 — her peak as a player internationally — and scored 11 goals in just 27 matches, a stretch indicative of her indifferent performances when not playing for her country.

Lloyd has always appeared more focused on her own performance, sometimes to the detriment of others. She claimed she should have started every match at the 2019 Women’s World Cup, as if to say her teammates weren’t good enough. Some see that as a confident, motivated player; others see it as a selfish, egotistical teammate.

And then there’s the section of fans who hate her because of how she doesn’t fit into the traditional women’s soccer narrative of players taking an active role in fighting for human rights.

The group of fans who think “social justice warrior” is a derogatory term love Lloyd for not using her platform for positive change. But a huge segment of devoted women’s soccer fans see how she has never done her homework on race, having made multiple comments that are seen as racist, or at the very least not anti-racist.

Lloyd was the only USWNT player or staff member who refused to take a knee in support of racial justice and equality before the bronze medal match at the Olympics this summer, an act of defiance she has repeated during NWSL play. She’s made insensitive comments on race repeatedly on social media, usually deleting them but not before screengrabs were taken.

Soccer fans are unsurprisingly using Lloyd’s retirement to recall these shameful moments from Lloyd, who doth protest too much when accused of being racist. The haters almost completely took over the #ThankYouCarli hashtag on Twitter.

you have no idea how much this helped me in a dark time! LEGEND @CarliLloyd #ThankYouCarli pic.twitter.com/IJxGjLiYQX

Nope that’s not the worst. Things like this. She’s not a good person pic.twitter.com/6HU3U7JKYo

There are players who are actually making a positive difference, and sports journalists aren't giving them nearly half the attention they give to Carli Lloyd, who does nothing for anyone but herself. It's getting old (and continues to be racist).

It's pretty telling to watch WoSo media fawn over Carli Lloyd and completely ignore every bigoted, racist skeleton in her closet.

And it's the elite journalists doing it. We already know many cover it for very little pay or even for free so it's not like they're being forced.

I mean, this isn't hard. She's a legendary footballer. She's also guilty of racism. There have been plenty before her and there will be plenty after her.

It's one thing to have an editor expecting you to write a glowing tribute to her. It's quite another to do it unprompted.

On a truly legendary career.

The question thus becomes: Is this too much for Carli Lloyd? Does she deserve this much fanfare for her retirement?

On the pitch for the USWNT, she’s an undisputed Top 15 player of all time in women’s soccer.

Off the pitch and at the club level, she’s got more baggage than an airport the day before Thanksgiving.

Can you celebrate the player while acknowledging her shortcomings elsewhere? I feel you have to take a similar approach as one does to Michael Jackson’s music or Pablo Picasso’s art — some will be able to appreciate the skill without supporting the person, others will not be able to separate the two and still more will enjoy the skill because of who the person is.

I imagine most of Lloyd’s fans are unaware of her questionable history on race, so it’s even more important to make note now, while the spotlight is on her. The truth is, the fans who have been paying attention had long suspected she is not anti-racist, even before her actions following the murder of George Floyd.

On the other hand, many of her supporters will have skipped the nuance and gone straight to the comments/my inbox to bash me for suggesting she’s not anti-racist. The small stream of fans pointing out her inappropriate past behaviors are a small drop in the flood of pro-Lloyd content this week, in part because most media outlets have mostly ignored this aspect of who she is.

As a human, she deserves every bit of criticism she’s receiving right now, even if it’s hard to hear over the clamor of acclaim heaped her way right now. So here are a few more of women’s soccer fans’ favorite Carli Lloyd moments to fight against the flood.

Carli, talking about her return from a team trip in Beijing - “I’m happy with how things go and delighted not to look at a cut of meat and wonder if it’s a dog.” #ThankYouCarli https://t.co/IbkoCOtbIp

when she said shes not racist because she has black friends #ThankYouCarli https://t.co/773zj4wuhp

When she set up her Black teammates to be ridiculed and harassed by white right wing trolls to save her own ass #ThankYouCarli https://t.co/y7BWXgpqxC

my fave memory is when she said called rapinoes protest kneel a distraction or when she blocked me on here that was pretty good too #thankyoucarli https://t.co/ES3Q7D4qw1